Six things about Saakashvili you wanted to ask Georgians

Mikheil Saakashvili is again being actively discussed in the run-up to the second round of presidential elections in Georgia – elections which have completely polarized society. Saakashvili’s United National Movement is the leader of the opposition in the country, and its candidate, Grigol Vashadze, has entered the second round of presidential elections which will presumably be held on 2 December 2018. We offer answers to six of the most common questions about Saakashvili, including about the dispersal of the 7 November rally which occurred 11 years ago when Mikhail Saakashvili was the president of Georgia.

For some of the Georgian population, the third president of the country (who is now organizing protests and demonstrations in Ukraine) remains the symbol of a new Georgia to this day; one freed from corruption and crime and a hero in the fight against Putin’s Russia.

Saakashvili’s supporters in Georgia consider him to be the most charismatic leader in the post-Soviet space and the architect of pro-Western reforms. However, to opponents, which Saakishvili has a lot of, he is a populist, inclined to authoritarianism and self-serving, who is not interested in anything but power. For his political biography, Saakashvili went through a lot of crises, not all of them successfully.

• Who is Mr. Saakashvili in Odessa?

• Video poll: 9 Ukrainians give their take on Saakashvili

The Rose Revolution: how did Saakashvili manage to come to power?

Saakashvili began his political career in 1995 when he was elected to parliament by the ruling Union of Georgian Citizens party whose leader was President Eduard Shervarnadze. He left his job at a New York law firm for the sake of politics. In parliament he became one of the leaders of the so-called ‘Wing of the Reformers’ within the ranks of the ruling party. In 2000 he was appointed Minister of Justice, becoming the youngest cabinet member at age 33. As a minister, he repeatedly stated the need to fight corruption. Saakashvili once showed photos of the luxurious palaces of his colleagues in the cabinet at a meeting which caused a scandal.

In September 2001 he resigned, accusing President Shervardnadze and his government of being reluctant to fight corruption. He then announced the formation of a new party, the United National Movement, whose main purpose was to fight against corruption. In 2002 his party won the local elections in Tbilisi and Saakashvili headed the council. 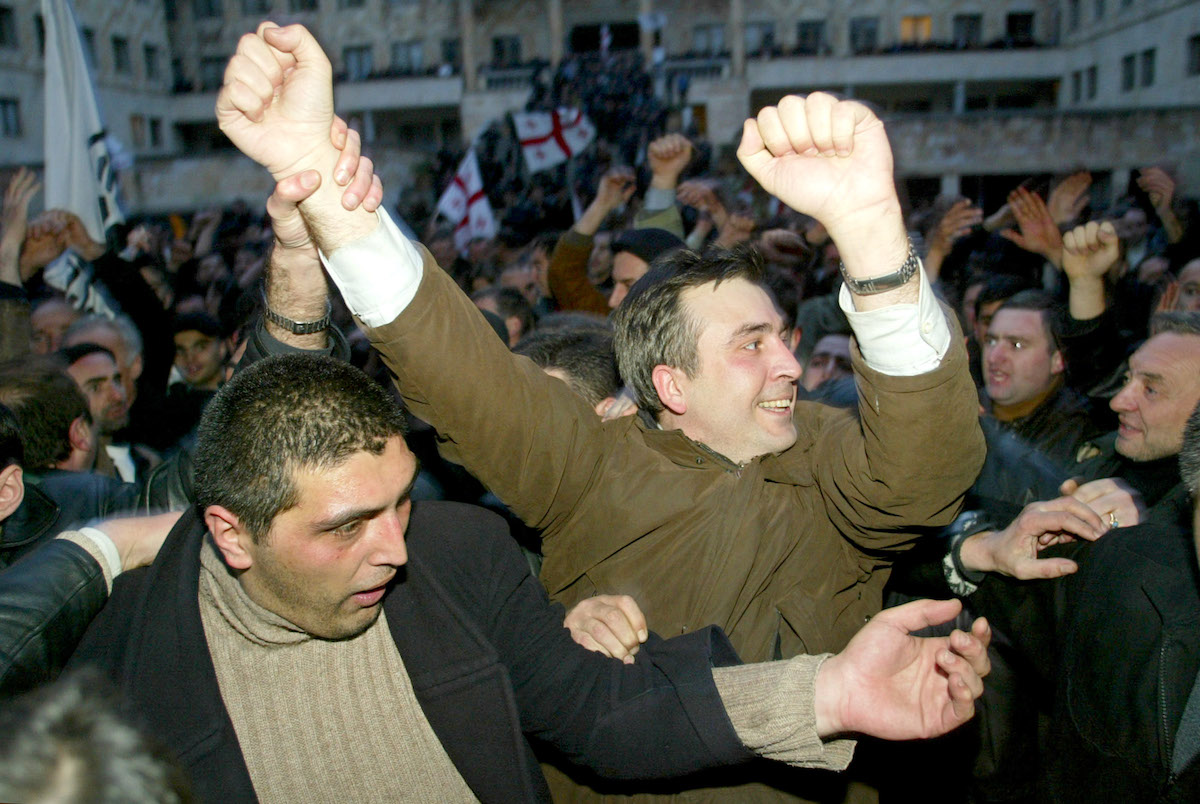 Mikhail Saakashvili with supporters in the courtyard of the parliament building. 23 November 2003. REUTERS/Gleb Garanich 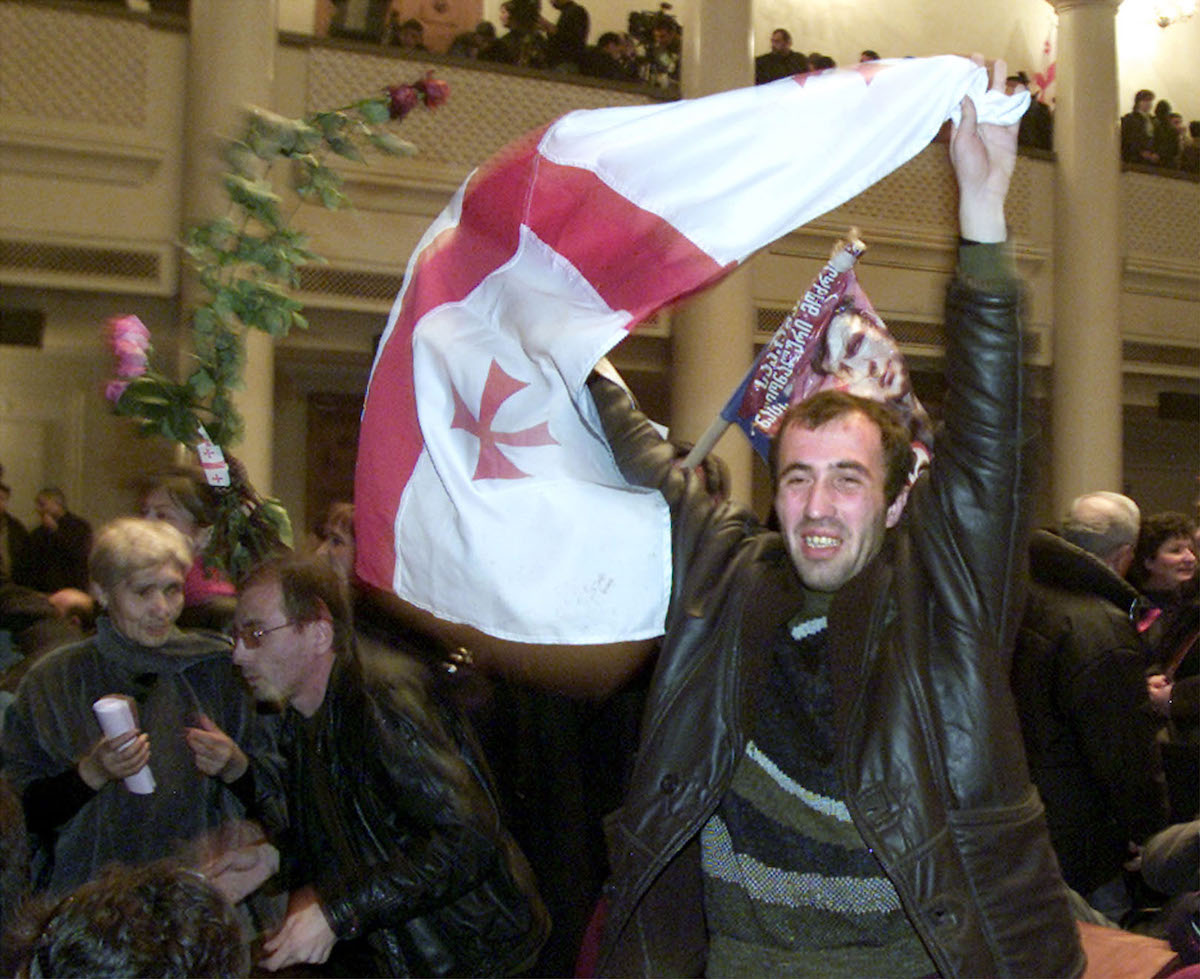 In November 2003 thousands of people took to the streets in protest against the falsification of the primary election results. Mikhail Saakashvili, who at the time was the head of his party, was one of three political leaders on top of a wave of protest. Former parliament speakers Zurab Zhvania and Nino Burjanadze were more experienced and influential opposition politicians than Saakashvili at the time. Most people on the street, however, chanted ‘Misha’.

It was he who, at the decisive moment on 23 November, led a procession to the parliament in order to prevent the opening session of the new legislative body that had been elected as a result of falsifications. Other leaders didn’t follow him due to the risk. Parliament was defended by special police units, and President Shevardnadze spoke on the podium, surrounded by numerous guards. In the end, however, Shevardnadze left the parliament building and then resigned as a result of the demonstrators’ pressure. Saakashvili, who became the main leader of the revolution, was elected president of Georgia in January 2004.

Reforms in Georgia: What was really done?

In tiny Georgia, firing 13,000 people in a single day is a big challenge, even for the president who was elected in by a vote of 97%. In Saakashvili’s first year in power, news releases began with more arrests of corrupt officials from the former government, businessmen connected to the previous government or criminal authorities. In the summer of 2004, all traffic police officers were fired suddenly. They created a small, but highly paid police patrol instead which did not accept bribes and instead fought violations and crime.

Many older teachers were dismissed from universities, and thanks to the introduction of the national examination, corruption when entering universities was almost completely eliminated.

In 2004, the Ministry of Economics was headed by a prominent businessman, Kakha Bendukidze, who became the author of Georgian economic reforms. In particular, he recommended a sharp reduction in the amount of taxes and the abolishment of many regulatory bodies that had been sources of corruption. As a result, the actual state revenue grew almost tenfold from 2003 to 2012. Pensions increased as well, from 14 GEL in 2003 (about $7 at the exchange rate then) to 150 GEL in 2012 (about $90).

The House of Justice opened during this period in Georgia. It is a special institution which serves citizens, a place where they could quickly get passports or other documents and register real estate or businesses.

“Beginning in 2003, Georgia has demonstrated unique success in the fight against corruption in the public services sphere … Georgia, by example, has shown that with a strong political will, combined with actions by the country’s leadership, can accomplish success in a relatively short period of time,” reads a study conducted by the World Bank entitled Fighting Corruption in Public Services: Chronicling Georgia’s Reforms.

These processes had another side however. The post-revolutionary government declared a zero-tolerance policy in the fight against crime and corruption. Both local human rights defenders and Georgia’s Western partners repeatedly criticized the authorities over the judiciary’s lack of independence. Prisons quickly wound up overcrowded as a result. The prison system was already in a difficult situation in itself as the rights of prisoners were systematically violated. It ultimately played a significant role in the defeat of Saakashvili’s party in the 2012 elections.

Dispersal of the 2007 protests: What was it?

On 7 November 2007, the police dispersed a demonstration on Rustaveli Avenue with the aid of tear gas and rubberized batons. The protesters were demanding that the president resign. On the same day special forces broke into Imedi TV, owned by opposition businessman Badri Patarkatsishvili and forcefully interrupted its broadcast.

The authorities back then justified their actions as stopping an attempted coup organized by Russia. This, however, did not save them from harsh criticism by Georgia’s Western partners.

It looked like it was the end of Saakashvili’s reign. The president, however, turned the confrontation around in his favor. Speaking on the same day, he announced his resignation and the appointment of early elections, which he won by a slight margin against a candidate from the united opposition.

The August war: How did Saakashvili retain power by losing the war?

The worst crisis Saakashvili faced during his presidency came in August 2008, when Russian forces invaded Georgia, intervening in a conflict on behalf of the self-proclaimed republic of South Ossetia.

It was then that the famous BBC footage of Saakashvili nervously chewing his tie was shot. He later said that foreign diplomats and Western leaders had advised him to leave the country.

When Tbilisi was threatened by real danger from Russian troops however, Saakashvili rallied supporters in the centre of Tbilisi. Thousands of people attended the rally, while the presidents of Ukraine, Poland, Estonia, and Lithuania, as well as the Prime Minister of Latvia stood on the podium next to him. 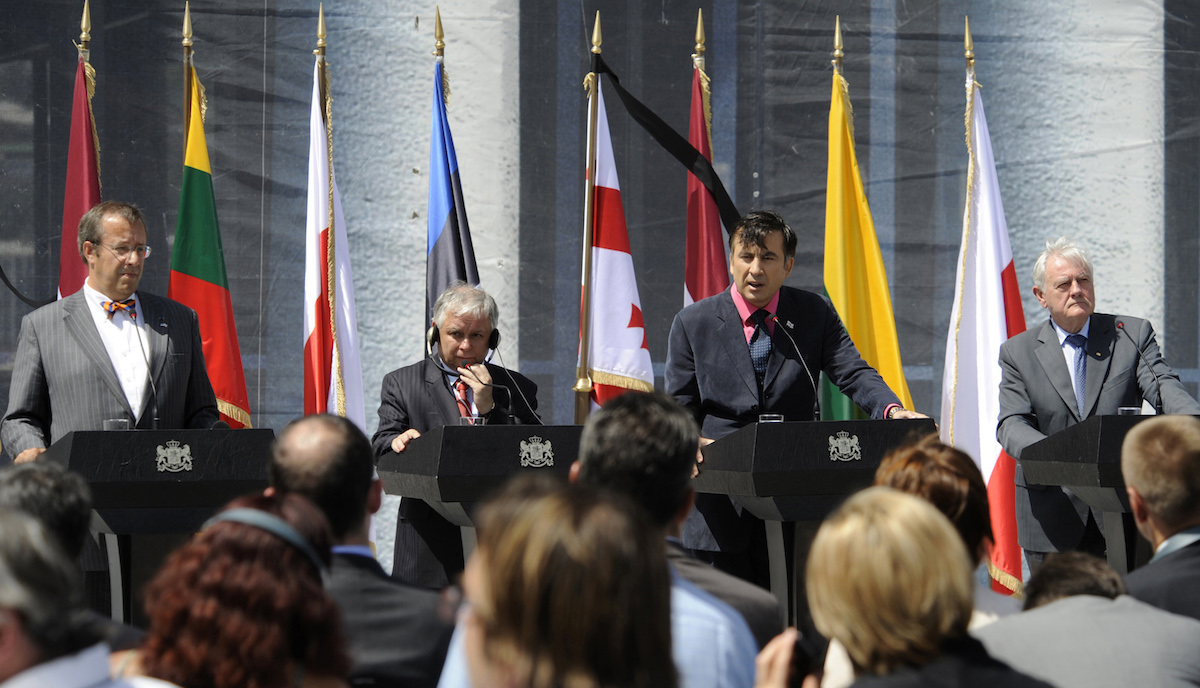 The Presidents of Georgia, Estonia, Poland and Lithuania at a briefing at Saakashvili’s residence. August 2008. REUTERS/Irakli Gedenidze

During those hot August days, the President of France, Nicolas Sarkozy, German Chancellor Angela Merkel and US Secretary of State Condoleezza Rice came to Tbilisi for a meeting with Saakashvili. Saakashvili signed a ceasefire agreement which called for the withdrawal of Russian troops to pre-war positions, and Georgian ones to their places of permanent deployment. With this, the ‘hot’ phase of the conflict ended.

Two years after the war, in his article Misha the Magician, Caucasus expert Thomas de Waal wrote: “Two years ago, after his defeat in the August war of 2008, almost everyone was counting the days until the president left office. Now he is again the undisputed leader of Georgia. Opinion polls suggest that no one else can touch Saakashvili in popularity stakes, with opposition leaders trailing in the dust.”

Ivanishvili’s arrival: the story of how Saakashvili lost power

Bidzina Ivanishvili, a Georgian billionaire, made his first statement about entering politics in October 2011. Prior to that he was a very reclusive figure. He didn’t give interviews, and almost never appeared in public. Even photos of him were a rarity until this point.

A new constitution had already been adopted by that time, which allowed Saakashvili to remain in power for as long as he pleased as prime minister if desired, but the president’s powers were limited. The opposition was weak, fragmented, and financially bankrupt. A year before the parliamentary elections, nothing indicated that the National Movement would be prevented from ruling for another ten years.

The billionaire, who had a reputation of being a philanthropist and humanitarian for many years in Georgia, could, however, make Saakashvili lose power. Ivanishvili gathered a motley alliance of political forces around him, and forced Saakashvili to make numerous mistakes. The authorities created problems for his new television company TV9, leading, for example, to the cable operators’ refusal to broadcast. Ivanishvili was also deprived of his Georgian citizenship due to a French passport which was ‘suddenly’ discovered. They caused problems with his bank, companies and supporters. Audiotapes of Ivanishvili’s associates speaking ill of him were published, and TV broadcasters close to the authorities intensively propagandized that Ivanishvili was a device of Putin.

This only led to backlash. The last straw was when Ivanishvili’s TV company aired covert footage of prisoners being abused right before the election. All of this affected the outcome of the elections on 1 October 2012. Saakashvili’s party lost power after nine years of control. Ivanishvili’s coalition, Georgian Dream, came to power and is currently ruling Georgia.

Ivanishvili’s arrival was the first crisis that Saakashvili failed to cope with.

Criminal Cases: Why is Saakashvili wanted in his homeland?

Another crisis for Saakashvili appeared after his resignation when criminal charges were filed against him. He cannot return to Georgia due to four particular charges:

Saakashvili himself has not acknowledged the accusations brought against him. None of these cases have been resolved in court yet. Saakashvili is still wanted in Georgia, and the prosecutor’s office periodically demands that Ukraine extradite him.