Why Armenian workers no longer find it profitable to work in Russia? 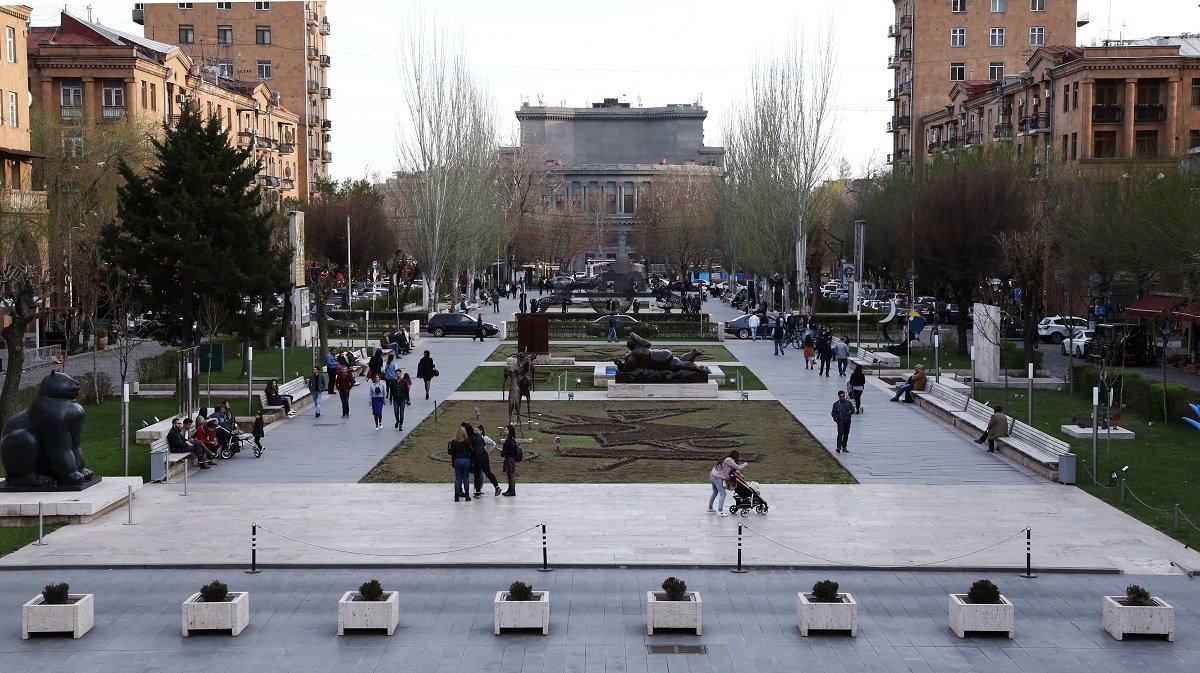 The peace and quiet, which is typical to Yerevan courtyards, is gradually being replaced by construction noise. In the 40 degree heat, an electric saw can regularly be heard buzzing while asphalt is methodically tramped down.

We select our hero quickly; however, the beginning of the interview is put off: Karapetyan Artsruni, or Uncle Artsrun, as the young people who work with him call him, has to finish some of his work otherwise the brigade will come to a stand-still.

There are only ten of them, and as it later turned out, practically all of them used to go for seasonal work to Russia. During a minute-long break, a man speaks in the Gyumri dialect where he is from, and where he has been staying in his homeland for the past three years. As to the question of whether it’s easy to find work, he says good specialists are always in demand.

There is, of course, a grain of truth to his words, though he has also been lucky. Finding work in Armenia has never been easy. The volume of construction work has been steadily declining for years. The level of unemployment in the country in the first quarter of 2017, according to official data, was 19 percent. And the only solution for many is to look for work abroad.

Having finished his work, Artsruni gives us a few minutes. As the operator gets the camera ready, he jokes: where should I turn, how should I stand, where should I look. It’s evident that hard physical labor abroad has not harmed his sense of optimism.

Artsruni first started going to Russia during communist times in 1985. He says he received enough money back then, but wanted more. After the collapse of the Soviet Union, seasonal trips to Russia became commonplace for him, in addition to being a necessity.

In the beginning of the 1990s, Armenia went through a serious economic and energy crisis, when practically all industry was destroyed. Against the background of these events, one could witness the beginning of an outflow of the population. People left the country en masse either forever or to earn money.

Demographic scientist Ruben Yeganyan notes that in the 1990s Armenian migrant workers initially went to Russia with the intention to return; however, many of them ended up staying there.

“After the collapse of social-economic life in the country, a flow of temporary migrants was formed who tried to handle this abnormal situation which had taken place in the republic with their trips [to work abroad].”

Artsruni was not an exception. “They payed more there of course. There was always little work, as there is now. No one can say that by working here on a construction site you can support a family.”

But despite this, our subject has stayed at home for several years now. During his last trip, he worked at Olympic construction sites. But after 2014 he did not leave because of the sharp drop in the strength of the rouble and the decrease in work spots. Simple arithmetic showed that he would be able to earn the same money there as if he stayed home.

“Up until 2014 we earned well. About 1000 dollars a month, not less. Sometimes more, but not less. But now the rouble has lost half its strength. And because of that it’s not worth it to go there. Because there I have expenses, such as for cigarettes, my phone and other things. If you deduct these expenses, then nothing remains. It’s better to stay here with my family.”

Artsruni in the pre-crisis years sent home about 800 dollars a month. As he notes himself, those who continue to leave and work in Russia receive about 40 – 45 000 roubles a month. And given the low rate of the rouble, they are only able to send home a few ‘kopecks’.

“People my age and older no longer leave. Age in some ways has already taken its toll. But for some youth its profitable to leave for Russia, because they only have to worry about themselves. But those with families try not to leave,” says Artsruni.

Several statistics have already shown that fewer people are leaving Armenia for Russia, however there are still no concise mechanisms for measuring and tracing work migrants on the post-Soviet space. For example, according to the Eurasian Economic Commission, in 2014, when western sanctions had only just been implemented against Russia, 286 000 people from Armenia travelled north.

One year later, when the Russian economy was subject to stagnation, and the rouble went through a sharp drop, the number of citizens with Armenian passports that had crossed the Russian border with the intent to work decreased to 124 000.

The same dynamic was retained in 2016. According to data from the Russian Academy of National Economy, in 2016 the stream of labour migrants from Armenia continued to lower, despite Russia itself having returned to pre-crisis indicators from 2012-2013.

There is another interesting statistic which is tragic for the Armenian economy and which snipes away at the welfare of the citizens of the country. Over the period of 2014-2016, the number of money transfers from Russia to Armenia decreased by 38 percent.

Although this data is not ‘official’, they allow one to come to the conclusion that Armenian labour migrants have started to go to Russia for seasonal earnings less and less.

For Hrach Khachatryan, the only way way that he could feed his family for many years has been to find work in Russia. The alternative has been to remain in his village and work in the land. But in this case he risks acquiring debts, and he still needs to pay for his son’s education.

Despite the crisis, he left for Chita (Russia) this year. However, his expectations for work and money were not fulfilled. He ended up returning in the end of August.

“We fixed-up one-room apartments, the quality of which no one really demanded. We finished quickly, and received about 25 000 roubles a month. Think of expenses for living space and food, and for the ticket there and back, and you’ll understand how much I earned this year.”

Hrach Khachatryan’s story is standard: they agreed on the price, went with the whole team and on-site discovered a rather different state of affairs. There was no real choice, they had to work and earn back their expenses for the trip. Thousands of people end up in a similarly vulnerable situation. The story of migrant laborers being tricked in Russia is told by many who go to work in construction in Russia.

Speaking about the reasons for the decrease in the number of migrant laborers to Russia from Armenia in recent years, demographic scientist Ruben Yeginyan points out two factors:

“Because of the sanctions against Russia, the earnings of the entire country has significantly decreased, including those of labour migrants… The second factor is that one needs to take into account the changes in the approach to migration policy in Russia. Namely in 2014, a draconian law was passed according to which workers were deported for the smallest of violations and were forbidden to re-enter the Russian Federation for several years.”

The worsening of the economic situation has directly affected the level of earnings of Armenian labour migrants, supposes Ruben Yeginyan.

“As our research data shows, over the past 3-plus years, the earnings of labour migrants have decreased by more than double. Our labour migrants earn so little that money transfers of a similar size are sent back home.”

Here it should be noted that this is not the first case of a decrease in the migrant labour flow from Russia to Armenia.

In the 2000s, when programs began to restore the zones affected by the earthquake in Armenia’s second biggest city of Gyumri, there was large-scale construction which lead to a significant decrease in migrant labour flow. However, afterwards, the same indicators returned. Now the situation might return.

In this year, according to official data from the Armenian side, a 15-percent growth in the number of money transfers from Russia to Armenia was registered in comparison to 2016. Specialists say that such a dynamic will soon lead to the restoration of former indicators of labour migration in Russia.

But one shouldn’t forget that the situation might be affected by the new western sanctions imposed against Russia, as a result of which the Russian economy might come up against several difficulties. Moreover, as is known, the smallest of negative tendencies in Russia can affect economic indicators in Armenia, and the labour migrants are the hostages in such situations.

Whatever the situation is, one thing is clear: it is only by improving the condition of the Armenian economy and the creation of new work places in the country that can lead to a permanent decrease in those departing for Russia for seasonal earnings. However, taking into account the current rate of economic growth in Armenia, this is not something worth counting on.