The situation around Rustavi 2 TV has reached its peak. On Friday, February 17, on Rustavi 2 TV management and staff’s decided the company suspended its broadcasting for 2 days. The TV channel ran a black screen with an inscription in white letters, that read: ‘We are protesting against injustice’.

“This is an extreme measure of protest that the broadcaster can resort to. This silence is an attempt to bring our voice to every single one of you.We’ve been left with no other choice,” said ZaalUdumashvili, the TV company deputy director generaland the host of ‘Courier’ news program.

Whereas on Sunday, February 19, the TV company supporters organized a mass rally on Rustaveli Avenue. Rustavi 2 TV is looking forward to the Supreme Court ruling.

Thousands of people gathered on Rustaveli Avenue, in Tbilisi center, to express their support to Rustavi 2 TV company.

Although the precise date is yet unknown, but the Supreme Court is expected to deliver its judgment on the recent years’ most high-profile case over Rustavi 2 TV company’s ownership soon, presumably end of February.

The Supreme Court should say its final word in a 1,5-year disputeabout who is actually the country’s most top-rate TV company’s owner.

Whether the government-critical TV channel will continue its broadcasting or not largely depends on this decision.

‘Ivanishvili, hands off Rustavi 2 TV’; ‘Let’s defend freedom of speech!’; ‘Don’t shut down my favorite program!’; ‘I love my mom and my mom loves Rustavi 2!’; Rustavi 2 belongs to people!’-thousands of people were standings and holding the posters with such slogans outside the Parliament building, on February 19.

The opposition political parties, representatives of NGOs, civil society and mass media, as well as famous singers and actors, were rallying side-by-side with the ordinary citizens. Even those, who are generally critical with regard to Rustavi 2 TV, support this TV company, as they believe that protection of this company today is necessary to ensure the existence of freedom of speech in the country.

ZaalUdumashvili, an anchor of the TV channel’s main news program, who led the rally, appealed to the public as follows:

“If Rustavi 2 TV falls, that won’t be just a fall of a single TV channel. It will mean that tomorrow you will no longer have the space where your problems will be discussed…let’s tell the government together that no one will ever infringe the freedom of speech in this country.”

Politicians didn’t make public appeals at Rustavi 2’s organized rally. There were only TV channel journalists and renowned TV hosts at the rostrum, who thanked the audience for their support.

In November 2015, the Constitutional Court accepted for proceeding Rustavi 2 TV’s lawsuit and restituted the TV channel’s acting management’s powers. A week before that, the acting management’s authority had been suspended under the Tbilisi City Court ruling. The judicial dispute as to who is the country’s top-rated TV company’s owner has been underway for 1,5 years already.

Throughout this period the TV company assets have been seized.

Kibar Khalvashi, a businessman and TV company’s ex-owner, who managed Rustavi 2 TV in 2004-2006, demands the company back, claiming he was pressured by Saakashvili’s government into ceding it.

In November 2015, Tbilisi City Court ruled in favor of KibarKhalvashi. The TV company is now looking forward to a historic decision- the broadcaster’s future solely depends on the decision of the Georgian final instance-the Supreme Court.

According to the Transparency International-Georgia NGO, the TV company’s owner changed 20 times in 2004-2012. Each owner change story was related to some vague deals that still raise many questions. And there was Saakashvili’s government behind each of those deals.

Although, throughout the 23-year history of TV company’s existence, Rustavi 2 TV owners have been replacing each other under suspicious circumstances, fewer will nowadays question the fact that there are authorities behind Khalvashi. The latter is trying to seize the TV company from its former owner under the pretext of a private dispute and change the broadcaster’s editorial policy. The incumbent government tries to take the same path that the former authorities followed – the NGO representatives believe.

Meanwhile, the ruling team members regard Rustavi 2 TV case as a private dispute, denying any possible interference in the judicial processes.

Commenting on the rally outside the parliament building, EkaBeselia, the majority group member, noted that the court ruling had nothing to do with restriction of Rustavi 2’s freedom of speech or expression.

“Our demand is rather simple, we want justice,” said NikaGvaramia, Rustavi 2 TV Director General, when addressing the rally participants.

In his words, today, the Supreme Court not only has a chance to defend the freedom of speech, but also to create a precedent of independent judiciary.

Rustavi 2 TV will mark its 23rd anniversary on June 1, 2017. Even those, who are critical with regard to the TV channel, admit its particular role in Georgia’s modern history.

During the Rose Revolution, Rustavi 2 TV openly supported then-opposition. TheTV company journalists disclosed officials and released stringent critical reports in Shevardnadze’s corrupt epoch. There was nothing left beyond their focus, and they posed great discomfort to the leadership. For that very reason, numerous attempts were made by Shevardnadze’s government to shut down the TV channel.

Rustavi 2 TV’s popularity reached its peak in that period. The ‘Victorious People Television’ – that’s how it was referred to after the Rose Revolution. People stopped journalists in the streets and expressed gratitude to them.

However, later, the TV channel’s reputation started facing hard times. A powerful critical media wasn’t beneficial for the government that came to power as a result of the Rose Revolution and that launched some painful and unpopular reforms. What happened next was that country’s all central TV channels, including Rustavi 2, fell under control of Saakashvili’s government. Sharp political programs and critical stories vanished from the broadcaster’s air. The latter was gradually losing the public trust.

Today, Rustavi 2 TV journalists admit that it was a great mistake and claim, they are going to jump at a new chance:

“If there had been the same wave of protest many years ago, when Rustavi 2 TV’s editorial policy was changed by then-leadership, everything would have been absolutely different now. Instead, we, the journalists, gradually abandoned the TV channel, and some of us left the journalism…If then-management had struggled this way, we would have maintained the TV channel even then. We are not going to repeat the same mistake twice,” said EkaKadagishvili, who has been working at the TV channel for years.

The majority of rally participants believe that Georgian Dream government intends to follow the same pass to get hold of the TV company today. As one of the rally participants told JAMnews, to him Rustavi 2 TV is associated with the freedom of speech and the authorities have no right to deprive people of it.

Meanwhile, the NGOs have made appeals to the government, recommending not to interfere into the trial. According to EkaGigauri, Transparency International-Georgia director, people who came to the rally have demonstrated to the authorities their readiness to defend Rustavi 2 TV, media pluralism and democracy.

Among those, who came to support Rustavi 2 TV, were journalists from various media outlets, as well as people who are critically disposed to the TV channel’s editorial policy.

According to Nino Jangirashvili, Kavkasia TV CEO, despite the fact that the TV channel’s editorial policy was oftentimes unacceptable to her, Rustavi 2 TV should still continue operating. Jangirashvili believes that in case the TV company gets under the authorities’ control, all free media outlets in the country will become vulnerable.

Rustavi 2 TV resumed its broadcasting on Sunday and provided live coverage of the rally outside the Parliament.

ZaalUdumashvili pledged to the rally participants that Rustavi 2 TV would never be turned off. 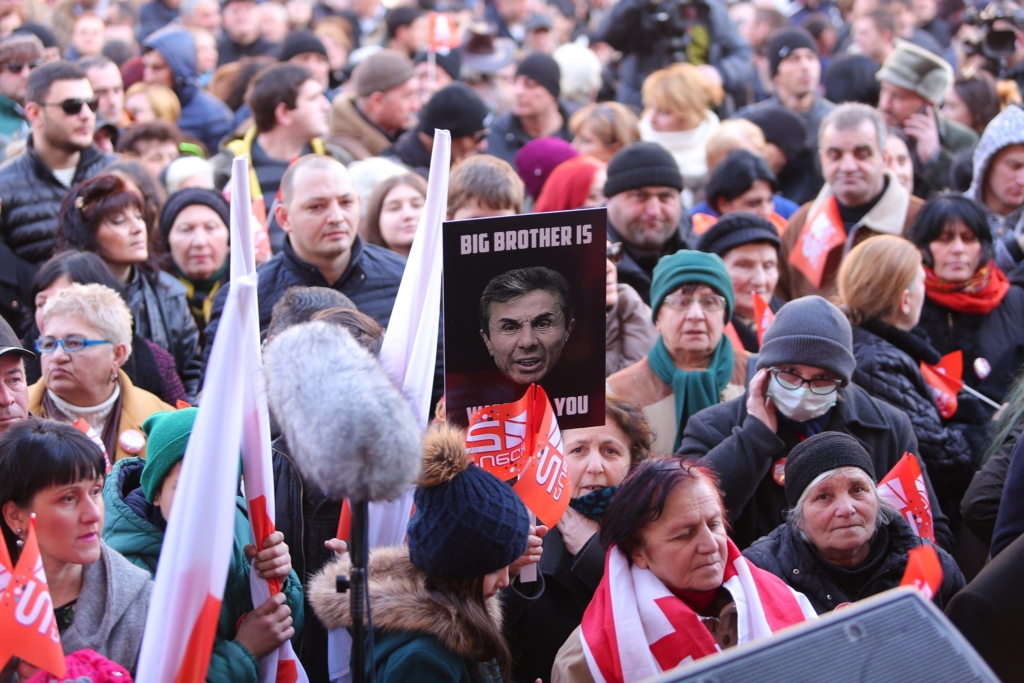 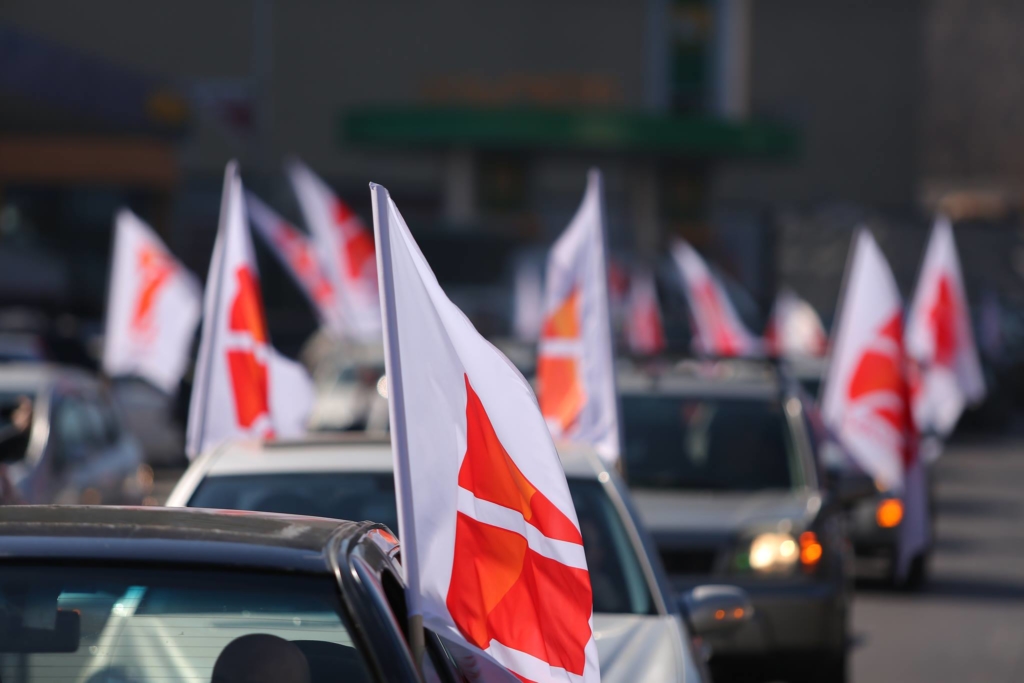 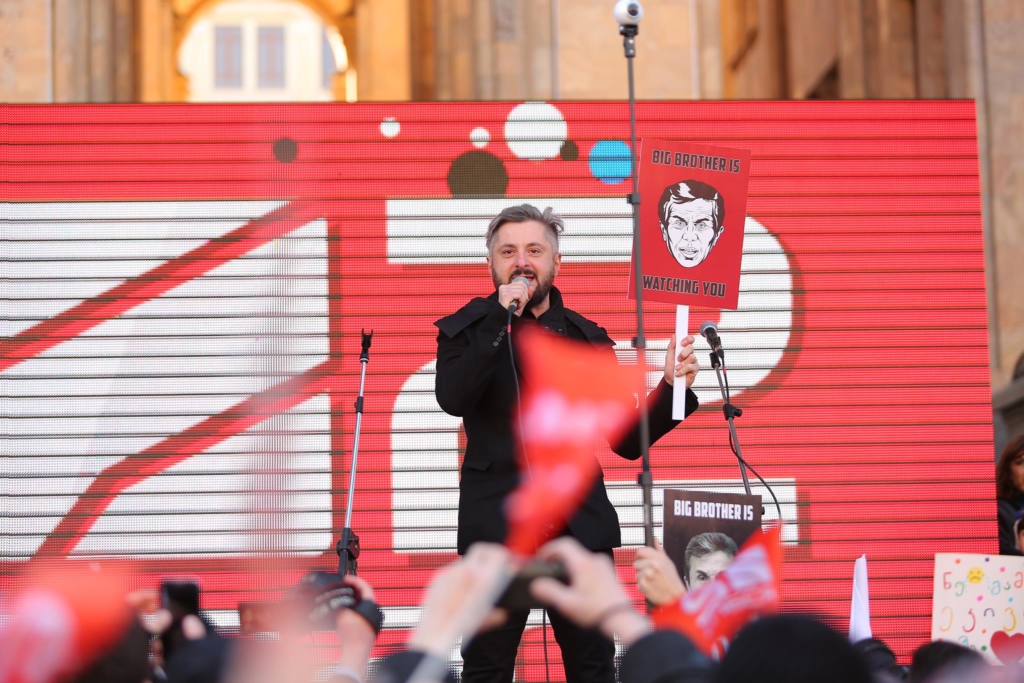 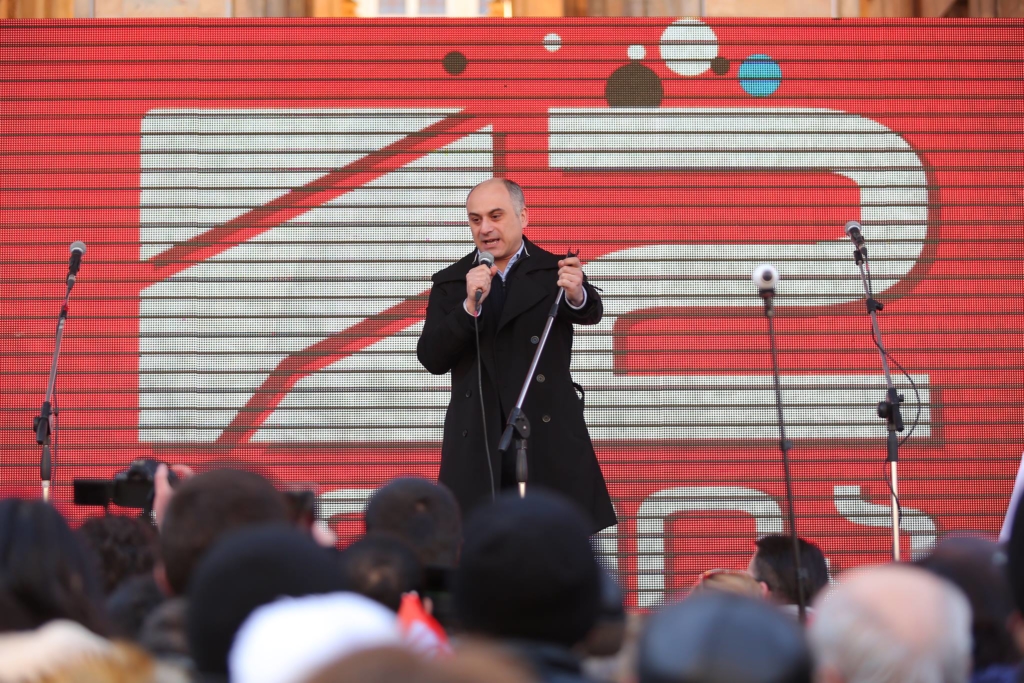