Russian presidential aide Vladislav Surkov, who handles issues related to Abkhazia in the Kremlin, arrived in Sukhum on July 31 – pundits and social media users agree that he has come to lend support to the candidacy of incumbent President Raul Khajimba in the presidential elections scheduled for August 25.

However, the official purpose of the Kremlin official’s trip is to inspect infrastructure facilities in Abkhazia, which are being built with Russian money. 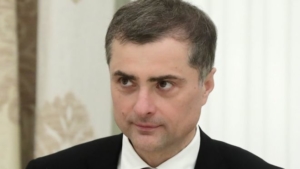 Formally, he deals with issues related to Abkhazia, South Ossetia and Transnistria.

Informally, he also oversees the unrecognized DPR and LPR in the south-east of Ukraine, where war has been going on since 2014.

Surkov began his career in Russian oil company YUKOS as a security guard. After the nationalization of the company and the arrest of its owners in 2015, Surkov’s rapid career growth began in the Russian presidential administration.

Vladislav Surkov is also known as a publicist and the creator of colourful political science terms as “sovereign democracy” and “the deep public.” Surkov is the author of several written works as well, which critics have called “graphomania”, and pointed at Surkov himself as a ‘hack.’

•What is the difference between Abkhazia and Switzerland?

During the day, Surkov inspected several buildings under construction and major repairs.

He visited the Gagra 1 electrical substation, which was built with Russian funds, with Prime Minister of Abkhazia Valery Bganba,

Before the reconstruction, the power of the substation was 20 MW, now it reaches 50 MW, which makes it possible to supply the entire central part of Gagra with high-quality electricity. Before the launch of the substation in Gagra, there were regular interruptions of electricity, especially at the height of the holiday season.

The cost of the reconstruction was 167 million rubles [approximately $2.6 million].

In addition, in the Gudauta district, Vladislav Surkov visited the largest Abkhaz village of Lykhny, where the overhaul of a local school is also being completed with Russian money. The estimated cost of the object is 135 million rubles [approximately $2.1 million].

A meeting was held with President Raul Khajimba, at which, according to official information, a draft investment programme to support Abkhazia from Russia for 2020–22 was discussed.

The Caucasian Knot writes that the amount of financial assistance that Russia allocated to Abkhazia in 2018 and 2019 was estimated at about 3.24 billion rubles [approximately $51 million].

According to the Ministry of Economy of Abkhazia, from 2010 to 2017, the investment assistance that Russia provided to Abkhazia amounted to about 14 billion rubles [approximately $220.6 million].