Yerevan has taken to streets, after death of Artur Sargsyan, the symbol of last year’s confrontation between opposition and police

Artur Sargsyan, aka ‘Hats Berogh’ [translated as a ‘bread-bringer’] died of ‘cardiopulmonary failure’ in ‘Armenia’ medical center at 3:40 p.m., on March 16. According to the Armenian Health Ministry spokesperson, Anahit Haytayan, Sargsyan was admitted to hospital on March 15 and was timely operated on the same night. However, despite the efforts, medics couldn’t save his life.

This news stirred the Armenian public: people gathered on the Freedom Square, in Yerevan center, blocked the carriageway on Mashtots Avenue and then marched towards the justice ministry building.

On July 17, the Armenian patrol police regiment was seized by the armed group that demanded release of Jirair Sefilian, an oppositionist, who had been arrested 1 month before the incident. Sefilian, a founder of the Founding Parliament movement, was arrested for illegal procurement, transportation and storage of firearms and ammunition. The rebels demanded release of Safilian and resignation of the Armenian President, Serzh Sargsyan’s resignation.

On July 26, at about 7 a.m., Artur Sargsyan drove his car through a police cordon to deliver food to the group members. Artur Sargsyan, who was referred to in mass media as ‘Ats Berokh’ (the bread-bringer), was accused of penetration into the patrol police regiment area, seizure and retention of the given regiment and the adjacent area.

Until February 9, Artur Sargsyan had been released on his own recognizance. However, on February 9, the court decided to replace the measure of restraint and arrest him for 2 months, referring to violation of Article 131 of the Criminal Code of Armenia by the accused (breach of conditions of the written undertaking not to leave the place). Afterwards, Artur Sargsyan went on a hunger strike, which lasted for 23 days and seriously affected his health.

The date of the protest rally, March 16, was set earlier and it had different demands. Artur Sargsyan was also expected to participate in it. The protesters intended to hold a march to the Russian Embassy in Yerevan, where they were expected to collect signatures for flying the Russian flag at half-staff on April 2 [a 4-day war between Nagorno-Karabakh and Azerbaijan started on that day in 2016]. The rally organizers explained that during the April war, the Armenian were soldiers were killed from the Russian weapons that the RF is supplying to Azerbaijan. 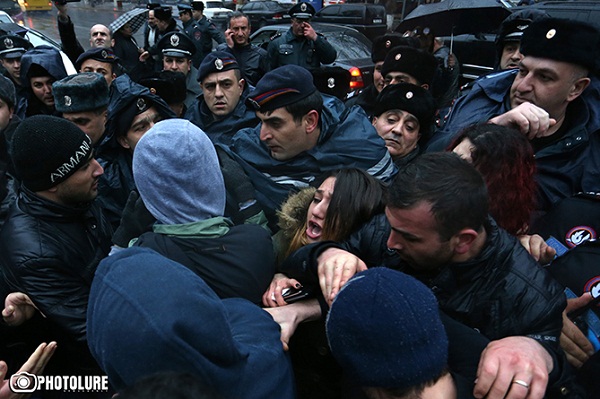 However, the death of the ‘bread-bringer’ changed the initial scenario. During the march, the protesters were chanting: ‘Artur, Artur!’ and ‘He who brought thee bread, has been killed’. Police officers accompanied the protesters.

Deputy Police Chief, Osipyan, from time to time tried to convince the protesters to disperse home, calling on them no to provoke clashes between the sides.

The rally organizers, in turn, responded that they didn’t aim to provoke clashes, they had no claims against the police and their objective was reach the Justice Ministry building and leave a loaf of bread with a black ribbon there.

The protesters also demanded resignation of the Armenian health and justice ministers, whom they blamed for the death of the ‘bread-bringer’. 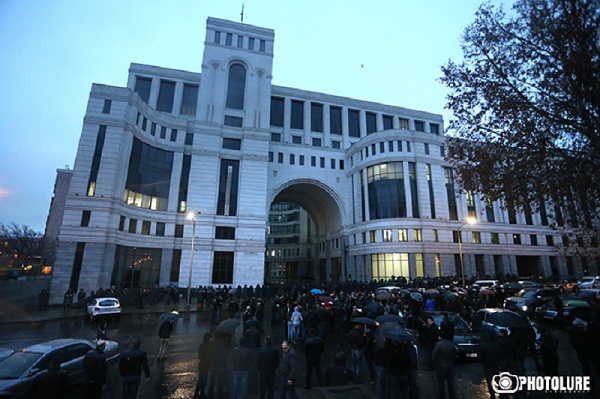 It took the police quite long to persuade the protesters leave the territory adjacent to the ministry.  Finally, the rally organizers made concessions on the condition that they would continue the rally on March 17.