Poisoning, shootings and elections – the main events of Abkhazia in 2019

The five most important events that took place in Abkhazia in 2019:

1. How the opposition helped the incumbent president get a second term in office

The presidential election was hands down the main event of 2019 in Abkhazia.

Incumbent President Raul Khajimba emerged the leader in the first round of elections in August, but he did so with such a low percent (24%) of votes that no one believed that he could expect anything other than a fiasco in the second round.

But then the opposition came to his aid.

Two opposition candidates, Alkhas Kvitsinia and Oleg Arshba, completed the first round almost on par with the president. But in the second round only one of them would be able to compete. They been bargained with each other for so long and in such a public manner that Raul Khajimba received the impossible: on September 8 he won the second round and another term in office.

The opposition continues to challenge his victory in court, but has no special illusions about what they may be able to achieve.

• How we got ‘criminal Abkhazia’ instead of the dream of a wonderful, small country

2. Was the opposition leader poisoned and who did it?

Perhaps the presidential election would have had a different outcome, if not for one circumstance. 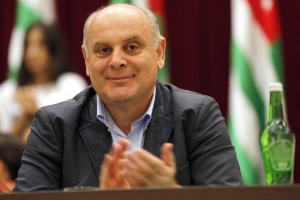 In mid-April, opposition leader Aslan Bzhania was hospitalised in a Moscow clinic, and later transferred to Berlin. According to tests carried out in Germany, he was poisoned.  A large concentration of mercury, cadmium and aluminum was found in his blood.

Few argue that his sudden illness is directly related to the presidential elections, but we are unlikely to find out who exactly was involved in this crime anytime soon.

Bzhania did not recover in time for the presidential elections. As a result, the opposition had to urgently seek a replacement, which was found in the person of the head of the largest opposition party Amtsakhara, Alkhas Kvitsinia. However, he, as the elections showed later, did not cut it.

3. Shooting on the Sukhumi embankment

This crime will surely be remembered for a long time with a shudder.

On the afternoon of November 24, a car drove up to the Ritsa Hotel, located in the very center of the Sukhumi embankment. Two men in balaclava jumped out and opened fire from machine guns at people sitting in a street cafe.

As a result, in addition to two “thieves in law” who were the targets, a 22-year-old waitress was also killed and several more injured.

For Abkhazia, such an impudent murder was a shock. Under pressure from relatives of the victims, the Minister of the Interior and the Prosecutor General with their deputies were dismissed.

• The poisoning of the Abkhaz opposition leader – did or didn’t it happen?

For several years, the national Abkhaz payment card APRA was a product exclusively for domestic use. It was impossible to rely on it outside of Abkhazia.

However, in 2019 the situation has changed.  APRA is now integrated into the Russian payment system MIR. This means that at any point in the world where the MIR card is serviced – and this is more than two dozen countries – the APRA card will also be accepted automatically.

Now, when leaving, the residents of Abkhazia do not need to bring large amounts of cash with them.

5. The tragedy of Sukhumi palm trees

2019 was a black year for palm trees in Abkhazia. The weevil pest reached the republic and destroyed several hundred trees, including almost all unique elephant palms. 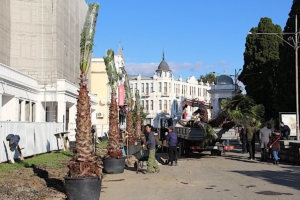 Until November, it seemed that it would take a very long time to make up for the loss.

But the newly appointed Sukhumi mayor Kan Kvarchia bought at his own expense and gave the city 61 ivory palm trees.

They were immediately planted on the Sukhumi embankment.  Following the mayor, several Sukhumi businessmen also decided to help their hometown with green spaces, and now Sukhum has begun to look much more beautiful.

Fateful 180 days: can Georgia become an EU candidate and what Tbilisi should do to meet all criteria?

Food war: yet another batch of fruits and vegetables from Azerbaijan stopped at the Russian border

"Home, to Europe" - large-scale rally to be held in Tbilisi in support of country's pro-EU course

"Home, to Europe" - one of Georgia's most crowded rallies in recent years. Photo/video