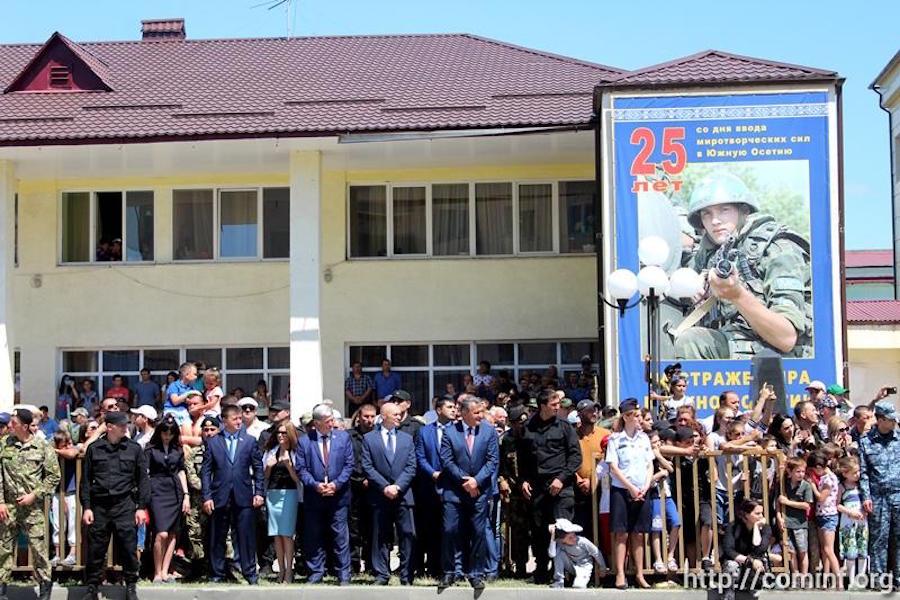 South Ossetia celebrated 25 years since the establishment of a unique peacekeeping force, meant to control the situation and prevent violence in the Georgian-Ossetian conflict zone.

The decision to establish a “Joint peacekeeping force” was taken in Dagomys on 24 June 1992 by Eduard Shevardnadze, the chairman of the State Council in Georgia, and the Russian president Boris Yeltsin. The decision to bring peacekeepers to the conflict zone was part of the agreement “On principles of Georgian-Ossetian conflict peaceful settlement”.

Four battalions from each of the sides involved – South Ossetia, Georgia, North Ossetia and Russia – made the force unique.

President Bibilov of South Ossetia along with members of the government visited the Russian military base №4 in Tskhinval. They attended a rally to commemorate those who died fighting for South Ossetian independence.

Two festive events turned out to be of particular interest for local residents.

A show re-enacting the arrival of the Russian military convoy on 14 July 1992 was staged near the village of Itrapis.

The Peacekeepers Street in Tskhinval saw a bikers parade. First came kids on ATVs followed by experienced bikers and skateboarders. In total, 70 bikers from Russia and South Ossetia took part in the show. The crowd was delighted to see biking freestyle.

The culmination came with festivities in the Pioneers Park in downtown Tskhinval.

Alan Jossoev, the leader of the Your Choice – Ossetia movement, told JAMnews:

“25 years after the establishment of the peacekeeping force, there is no doubt about it. The Peacekeepers brought stability and security to the region. They prevented the elimination of South Ossetians. It is worth remembering, that more than 100 000 Ossetians, who lived in Georgia, have suffered from ethnic cleansing under Gamsakhurdia in 1992, according to the UN’s statistics. The Peacekeepers in South Ossetia prevented ethnic cleansing, and provided peace and stability.”

14 July is an official holiday in South Ossetia.

The 1992 Agreement on the principles of peaceful settlement created the Joint Control Commission with the mission to control ceasefire, armed groups withdrawal, self-defense forces disbanding, and security along the line of contact.

The Joint Control Commission lasted until the next armed conflict in the region in 2008. On the first day of the 5-day long conflict, the peacekeepers base came under fire.

The conflict resulted in Russia`s decision not to support Georgia’s territorial integrity and recognize South Ossetia. Georgia supported by UN viewed this as a closer step towards Russian annexation of the region.

In 2009 two agreements were signed – the first “On friendship and cooperation between Russia and South Ossetia” and the second “Mutual efforts to safeguard the state border”, providing for the establishment of the Russian military base and the Border control department run by the Russian FSB.

The terms and toponyms, as well as views and ideas, used in the publication reflect a position of a certain community, and don’t necessarily coincide with views and opinions of JAMnews or any employees thereof. JAMnews reserves the right to delete comments it considers to be offensive, inflammatory, threatening, or otherwise unacceptable