From a physicist to an agronomist

The life of Suren Harutyunyan, a person majoring in physics, unexpectedly changed after her got involved in the production of organic teas and oils. It all happened after the collapse of the Soviet Union. 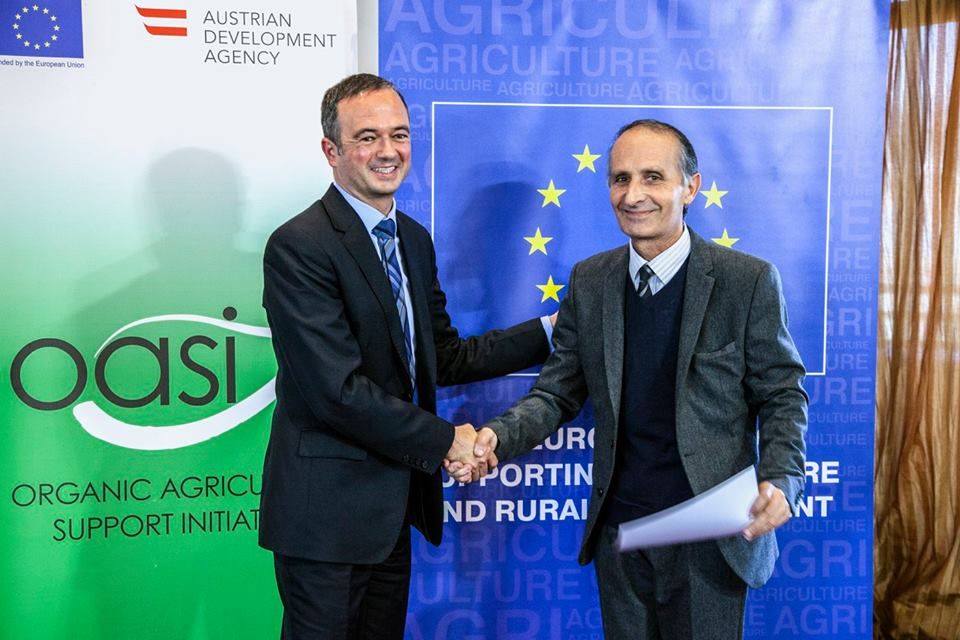 “At the time many of us had to deal with the challenge – to start doing something else, and I chose this path. I remembered that in those years many complained about a shortage of rosehip oil. This idea appealed to me and I decided to produce the rosehip oil myself. My knowledge of physics turned out to be useful in this regard. It was impossible to buy the technology, so we developed it ourselves, and later we organized the production,” says Suren Harutyunyan, Director of the Bizon-1 company.

Upon organizing the production of rosehip oil, they started manufacturing sea buckthorn oil, which was in higher demand. In 2012, the company got a certificate attesting to the quality of its products, and it started looking for markets beyond Armenia. 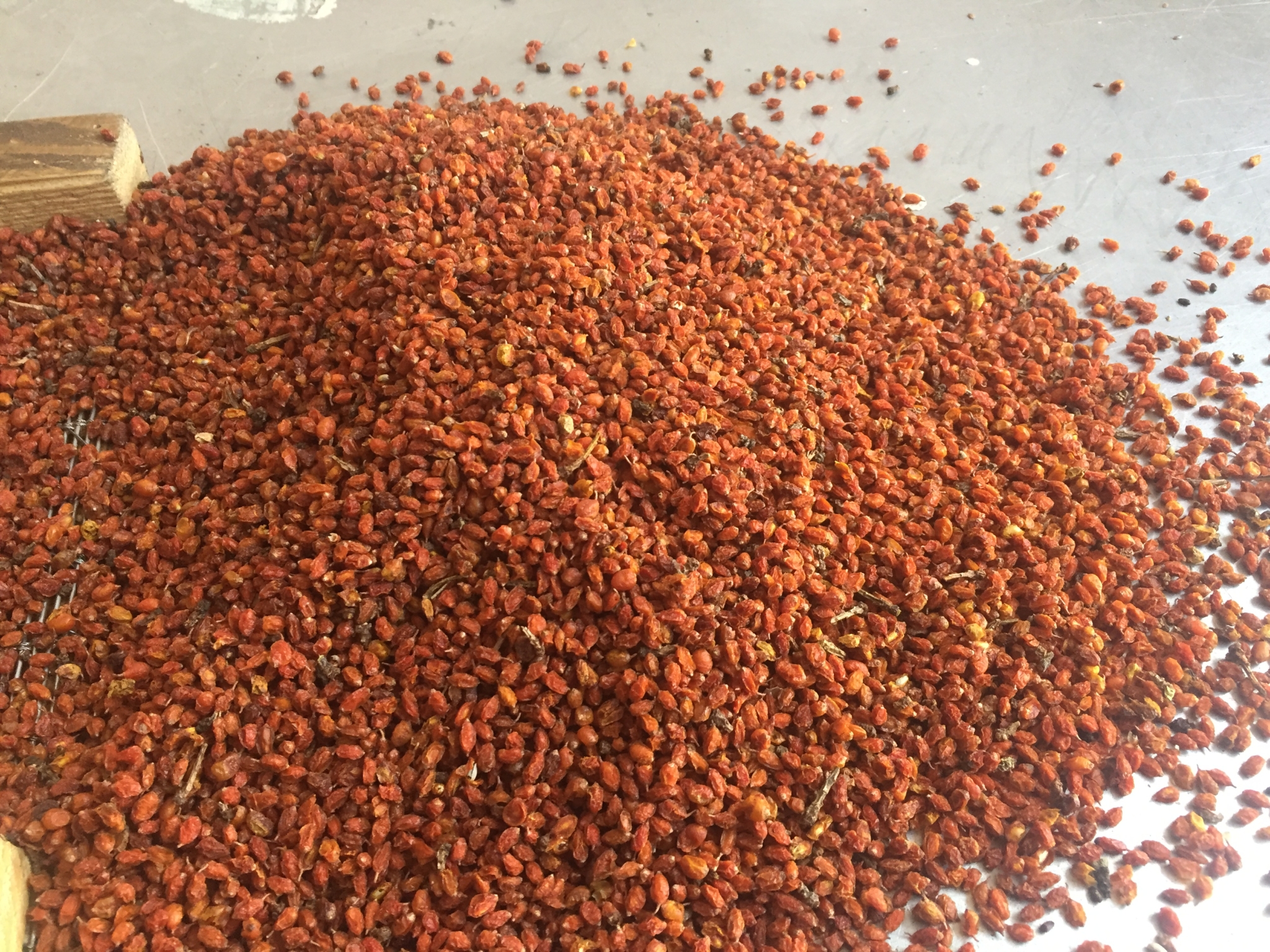 According to Harutyunyan, there was a lot of competition on the European market and, in order to kindle the Europeans’ interest, it was necessary to present a new and interesting proposal.

“As a novelty, we offered types of tea that we ourselves developed from idea to production. We offered 8 varieties of traditional teas and 6 kinds of organic ones,” says Harutyunyan.

Organic fruit seed oils is yet another branch of his company’s production. 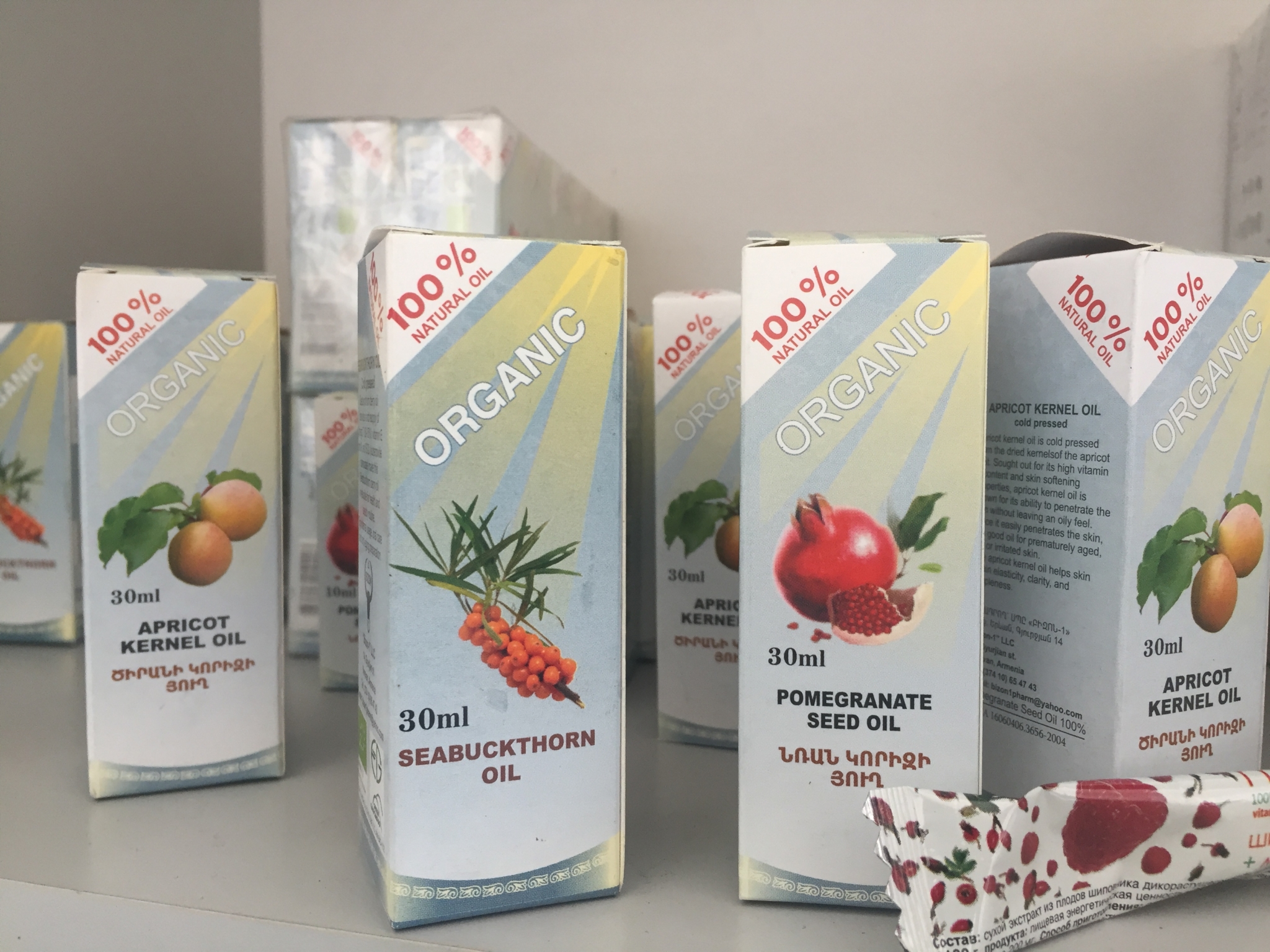 “Armenian organic oils such as sea-buckthorn, apricots and peaches are well-known to the Europeans. The company buys seeds from processing companies, including those manufacturing organic products.

“As for the sea buckthorn, rosehip, cornel berry and hawthorn, the rural population gather them from wild areas which are regarded as the basis for organics. Everything that grows on a wild mountain is clean. Raspberries are the only thing that we buy from organic farms,” says the former physicist.

Bizon-1 LLC is one of the 40 companies operating in Armenia who were granted an Ecoglobe certificate. Founded in 2002, the Ecoglobe company is the only Armenian organization issuing certificates to those who produce organic agricultural products and foodstuffs.

“About 20-30 companies in our country are currently on a transitional stage, on the way to obtaining a certificate. As the certification company, Ecoglobe meets all international standards, in particular those of the EU, USA, Canada, Switzerland and some other countries. The company’s certificates are recognized and accepted in all those markets,” says Nune Darbinyan, General Director of Ecoglobe and a holder of a PhD in Agricultural Sciences.

Armenian organic juices and dried fruits appeared on the European market largely due to the Shen charity NGO. It was with the assistance of this particular organization that the first organic orchards were planted in Armenia in 2001, which remain the largest certified orchards up until now. 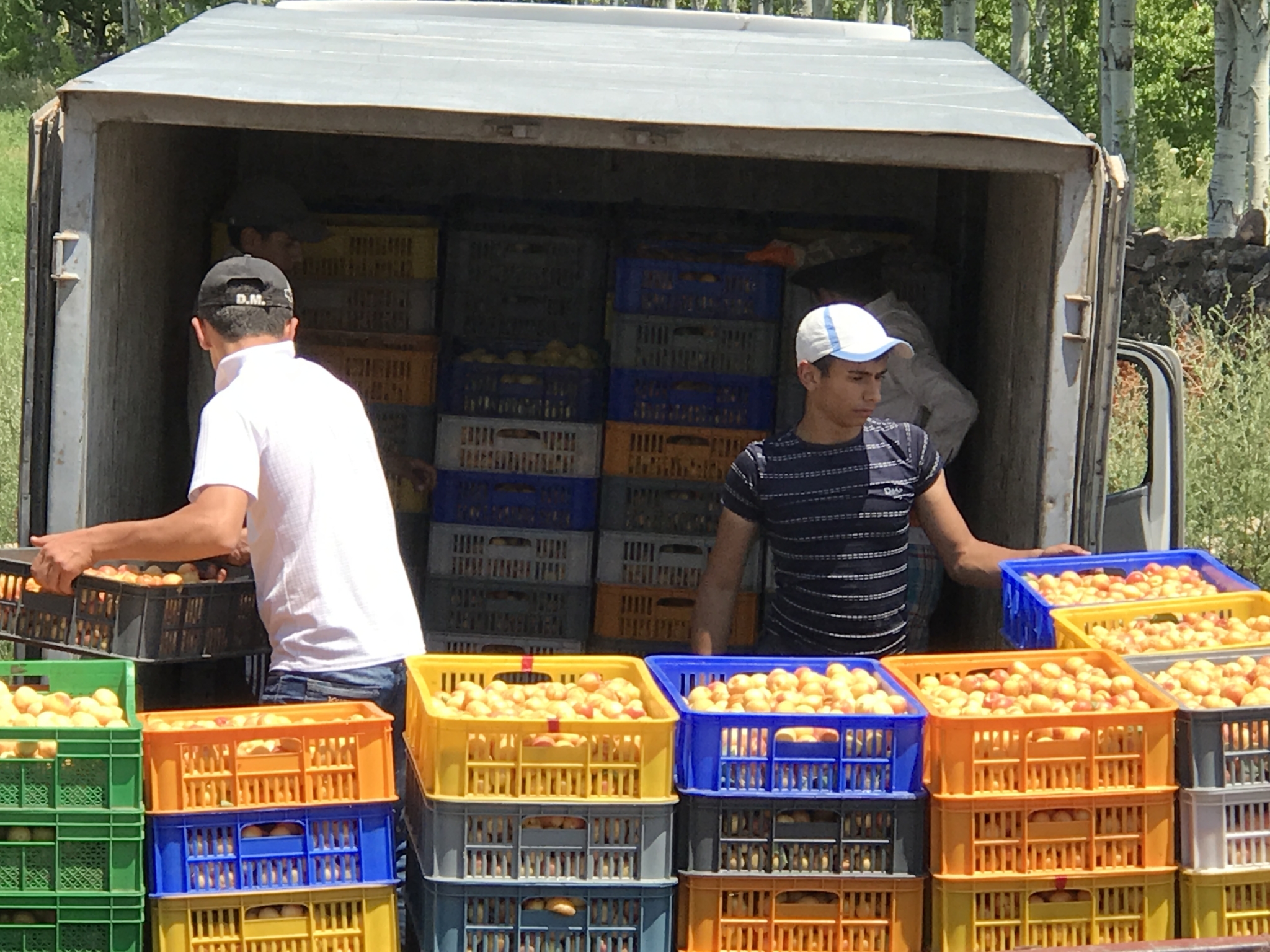 “Most of the orchards are apricot orchards, but we have apple, plum and peach orchards as well. We supply raw materials for organic dried fruits, preserves and juices. Processing companies obtain a processing certificate, but that’s actually two certificates – one for raw materials and another one for processing. You may often find labels that read as follows: produced from organic raw materials, which means that the production wasn’t organic. If there is an inscription ‘organic product’, then both the raw materials and the production process were organic.”

Armenian-made juices are for sale in Germany, France, Switzerland, USA and Canada.  The world’s largest baby food manufacturer Hipp has been buying organic apricot puree in Armenia in bulk. As for fresh apricots, they haven’t been supplied to the European market yet. 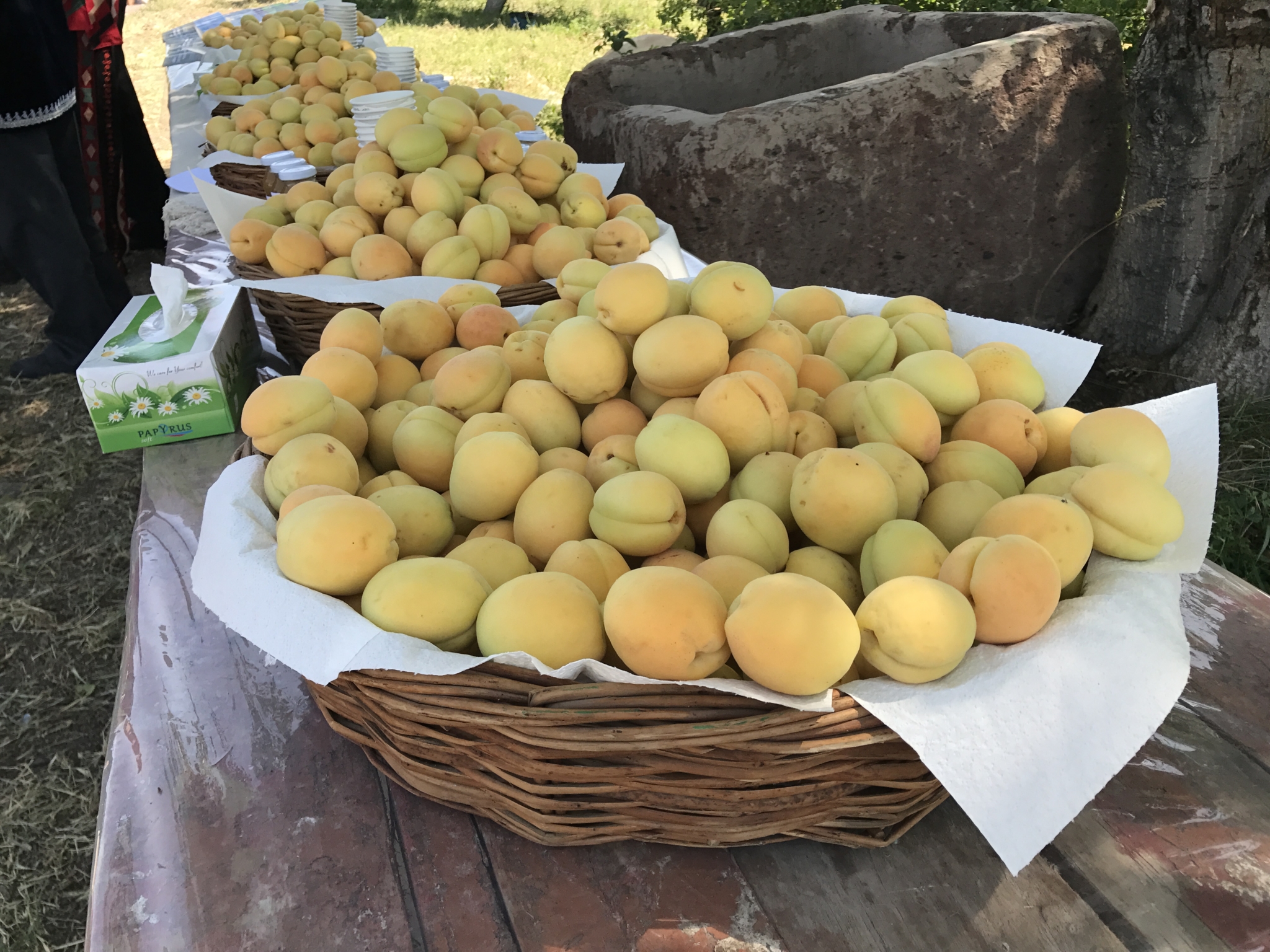 “Armenian-produced organic apricots have all the chances to enter the European market. However, it’s not really possible now as the Armenian borders are sealed … It would have been easier to solve this issue if the road via Turkey was open.”

After lengthy talks with the European farmers, the Coordinator of Agricultural Programs at Shen NGO has come to the same conclusion: apricot exports are associated with certain risks.

“It’s a rather long journey for fresh fruits: fruits don’t lose their quality, but there is very little time left to sell them on the market. It’s risky for an importer. One should manage to store, pack and sell fruits. Fruits could have been on the market for 10 days, but in this case there are only 4 days left. It’s a great risk. One has to manage to sell them in 10 days,” says Nvard Shahmuradyan.

Nune Darbinyan, General Director of Ecoglobe LLC believes that Armenia’s organic agriculture is developing slowly due to certain factors, including:

“The government’s support for organic farming is manifested only during0 negotiations, but otherwise there is no actual assistance. The government can subsidize land and water taxes for organic farmers, which will further boost organic food production. Low-interest loans can be offered to organic farmers. These are the levers for the development of this particular sphere,” says Nvard Shahmuradyan.

Andranik Mkhitaryan, Director of the Tsirani Haygi Co. recalled that when he first became involved in organic agriculture a few years ago people avoided to use the word ‘organic’ and they mocked him.

“Afterwards, as they saw us selling fallen apricots for AMD 200, while they were selling them for AMD 50, they understood the difference.”

“Organic farmers are facing problems at the domestic market, where many just label their produce as ‘organic’ and put it up for sale.”

“There is no agency to regulate the aforesaid process. Ecoglobe just issues certificates, but it doesn’t exercise control.  It’s the government that should control it through legal acts and inspections. ‘Bio’-milk and ‘bio’-eggs are available at the market, but most of the customers don’t even know how to check the conformity of those products, therefore all products should be labelled. A supermarket doesn’t require any certificate – it’s a business approach. They see that those goods sell well and they accept them. However, if there had been any control, they would have been more careful,” said Nvard Shahmuradyam.

Armenia passed a Law on Organic Agriculture in 2008. Experts believe it has certain drawbacks in terms of control. Shahmuradyan noted that interested organizations were preparing a package of legislative acts that would soon be submitted to the Ministry of Agriculture.

“If it is introduced, many fake companies will lose their ‘name’,” she said.

Nune Darbinyan, General Director of Ecoglob Co. believes that the production of organic goods should become a part of Armenia’s lifestyle:

“Those who want to be involved in organic agriculture should change their attitude, their vision and their way of thinking. I studied organic agriculture from different perspectives: it facilitates the development of ecotourism, produces of eco-friendly goods and creates new job opportunities.”

In her opinion, this field needs good managers, individuals responsible for production, as well as inspectors and consultants:

“The nature in Armenia is wonderful and it allows markets to be supplied with organic products, but we are actually losing this potential nowadays. On the one hand, the state provides subsidies for procurement of mineral fertilizers and for the use of chemical pesticides, which attracts the farmers. On the other hand, we are losing opportunities because we are not creating a backbone of professionals who will further promulgate this idea.”

Ministry of Foreign Affairs officials arrested in Azerbaijan for bribery, embezzlement – claim they were ‘helping ministry’

Ministry of Foreign Affairs officials arrested in Azerbaijan for bribery, embezzlement – claim they were ‘helping ministry’