Op-ed: Will changing Abkhazia's Minister of Internal Affairs help the fight against crime?

The appointment of Harry Arshba, the fifth new Minister of Internal Affairs in the past three years, was met by the Abkhazia police force with a business-like air.

On the day of his appointment, several main streets in the capital were cordoned off by law enforcement (20-30 individuals per street) who stopped and checked vehicles.

I never understood the meaning of these pointless actions – if anyone didn’t want to be stopped they could have just turned down a side street earlier in either direction and it would have been easy to get around the barrier without any problems. Not only big fish, but also the smaller fish have already learned not to get caught in these nets. They’ve been trained.

Moreover, the militia always welcomes a new leader with such useless ‘raids’. It’s an imitation of the ‘fight against crime’ and has become just a ritual.

And the word ‘reform’ itself, with which each new minister begins his activities, gradually disappears. Not only does it not work, but it’s annoying, especially when there are no actual reforms to speak of.

‘It is ordered from above: do not make any sudden movements’, sighs an acquaintance, a major, during a chat over a cup of coffee.

By the way, even if the authorities were to seriously approach the question of implementing reforms of the law enforcement system, nothing would come of it. To conduct reforms in one area and not in another is the same as replacing a toilet and sink in an apartment where all the pipes are sticking out of the walls.

The biggest obstacle to law and order is the authorities themselves. Never before has there been so much crime. Funny enough, the participants of it have been the children of highly-placed officials and people close to the top.

Under the current president’s rule, they have stolen right in front of video camera lenses, ferociously beaten up policemen and provided ‘protection’ for businesses. But criminal activity has been poorly handled – there haven’t even been any resignations. 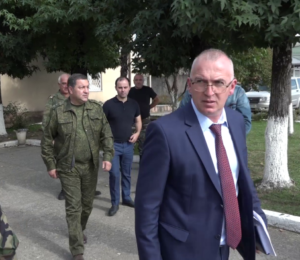 No one is jealous of Harry Arshba who was probably appointed just as an observer. Of all the ‘instruments and medicine’ required in order to treat a very sick patient, he has been equipped with a few meagre pills.

At the top, some think that if they were to enforce law and order it would be a blow against the fragile political system and stability, which must be extended at any cost up until the next presidential elections – that is, up until the summer of 2019.

But there are fears that such a ‘lacquered’ fight against crime will lead to chaos, rather than to the elections planned for 2019.

More people on the streets in Belarus, less violence. What will come after Lukashenko

Op-Ed: what Turkish-Azerbaijani military exercises in Nakhchivan mean for Armenia

More people on the streets in Belarus, less violence. What will come after Lukashenko