Nagorno-Karabakh: should the OSCE be or not

In a recent interview to Tert.am, Richard Hogland, a newly appointed Co-Chair of the OSCE Minsk Group for peaceful resolution of Karabakh conflict, called on Armenia and Azerbaijan to get back to negotiation table and comply with the agreement reached in Vienna and St. Petersburg.

What is it all about?

According to the Armenian sources, during the talks in Vienna and St. Petersburg, the parties agreed on deployment of investigation mechanisms on the contact line of Armenia-Azerbaijan troops. However, later, the Azerbaijani side repudiated the initial agreement, claiming it hadn’t signed any documents.

Further developments question not only the agreement itself, but the OSCE activity in the region, in general.

Armenia assumes that the problem doesn’t lie in the OSCE Yerevan office, but rather in funding the investigation mechanisms that is perceived by Baku as a means to consolidate the present status quo in Karabakh.

In this regard, the crisis of trust towards the OSCE has been recently widely discussed in Armenia.

This issue has become particularly topical, because one of the provisions of the Karabakh settlement plan envisages ‘international security guarantees’. If the OSCE cannot even ensure the deployment of equipment on the border and expand its representation mandate, then what guarantees can it offer in case of settlement of the conflict? This question has been frequently voiced both, in Armenia and in Karabakh.

The OSCE’s efficiency has been questioned in Russia too. Recently answering the Azerbaijani journalist’s question, Russian Foreign Minister, Sergey Lavrov, also called for deployment of the incident investigation mechanisms, but he recommended asking the ‘relevant organization’, why those mechanisms hadn’t been deployed so far.

Armenian analysts say, Russia may use those ‘doubts’ about the OSCE’s efficiency as a background for further shifting the Karabakh settlement from the OSCE format into a more ‘pro-Russian’ one, for instance, to put it under control of the Collective Security Treaty Organization (CSTO).

Azerbaijan, in turn, has been long making no secret of its intention to lead the Karabakh talks out of the OSCE Minsk Group format into the one that will be closer to it and will allow changing the status quo. And it seems that discrediting the OSCE is a rather ‘justified’ move on this path.

As Armenia stated at the Foreign Ministry level, the country was going to further cooperate with the OSCE. This organization is perceived in Armenia as the most optimal format for ensuring security, though it is admitted that the OSCE, which oftentimes observes an artificial parity, is incapable of accusing a party that has violated the ceasefire and, consequently, imposing sanctions against it.

The most recent bloody incident , according to the Armenian side, was reported on December 29, 2016. It is noteworthy that the incident took place on the Armenian-Azerbaijani border, in Chinari village, Tavush province, rather than in Karabakh. Three Armenian servicemen were killed and the Armenian side still has the body of the killed Azerbaijani commando. The OSCE again failed to name the guilty, confining itself merely to calling for deployment of the incident investigation mechanisms that would allow to expose violations. However, Azerbaijan refused in response again.

No assessments on part of the OSCE and other organizations make for building up escalation on part of Azerbaijan. Since the beginning of new year, there have been military reports on casualties among the Armenian military almost daily. It all resembles a tactic of inflicting minor but daily damage.

At the Russian Foreign Minister Sergey Lavrov’s news conference on January 16, Azerbaijani journalist straightforwardly asked him, what Russia was going to do if Azerbaijan decided to launch a ‘counterterrorist operation’ in Karabakh for solving its ‘internal tasks’. Lavrov also gave a straightforward answer, saying Karabakh was not Azerbaijan’s internal affair. What the Foreign Minister actually meant was that the ‘occupied regions can be regained’ only peacefully and, if agreed, with Karabakh’s final status. 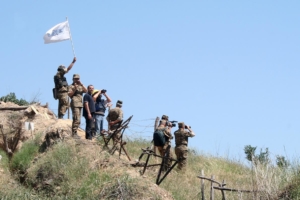 There are speculations in Armenia that Azerbaijani journalist’s question concerning ‘counterterrorist operation’ obviously aimed at provoking Lavrov. On a side note, as it turned out later, Azerbaijani journalist, who had put ‘a provocative question’ to Lavrov, was immediately fired. But it seems that an idea of certain ‘punitive operation’ has been actively pushed through in public discourse in Azerbaijan.

Azerbaijan attempted to carry out such ‘counterterrorist operation’ back in April 2016. As a result, the President of this country, Ilham Aliyev, had to appeal to Moscow for help and agree to cease fire provided that the ‘Armenians wouldn’t advance any further’. Moscow managed to establish armistice, but the risk of hostilities wasn’t subsided.

It means that Azerbaijan is making some underlying accusations, blaming the OSCE for maintaining the status quo. No matter what steps the OSCE makes now, Baku can take advantage of them for pushing through its next step and breaking the status quo.

In particular, if Azerbaijan’s veto is ignored by the OSCE, Baku will have ‘a moral right’ to withdraw from the organization and, consequently, from the Minsk negotiation format. Whereas if the OSCE meets Azerbaijan’s demand – closes the Yerevan Office and gives up on the investigation mechanisms, Azerbaijan will regard it as a sanction for waging a more wide-scale ‘counterterrorist operation’.

The OSCE has been silent so far, and, along with it, the status quo that Azerbaijan has been so desperately trying to change.