Munitions continue to be cleared after ammunition warehouse explosion 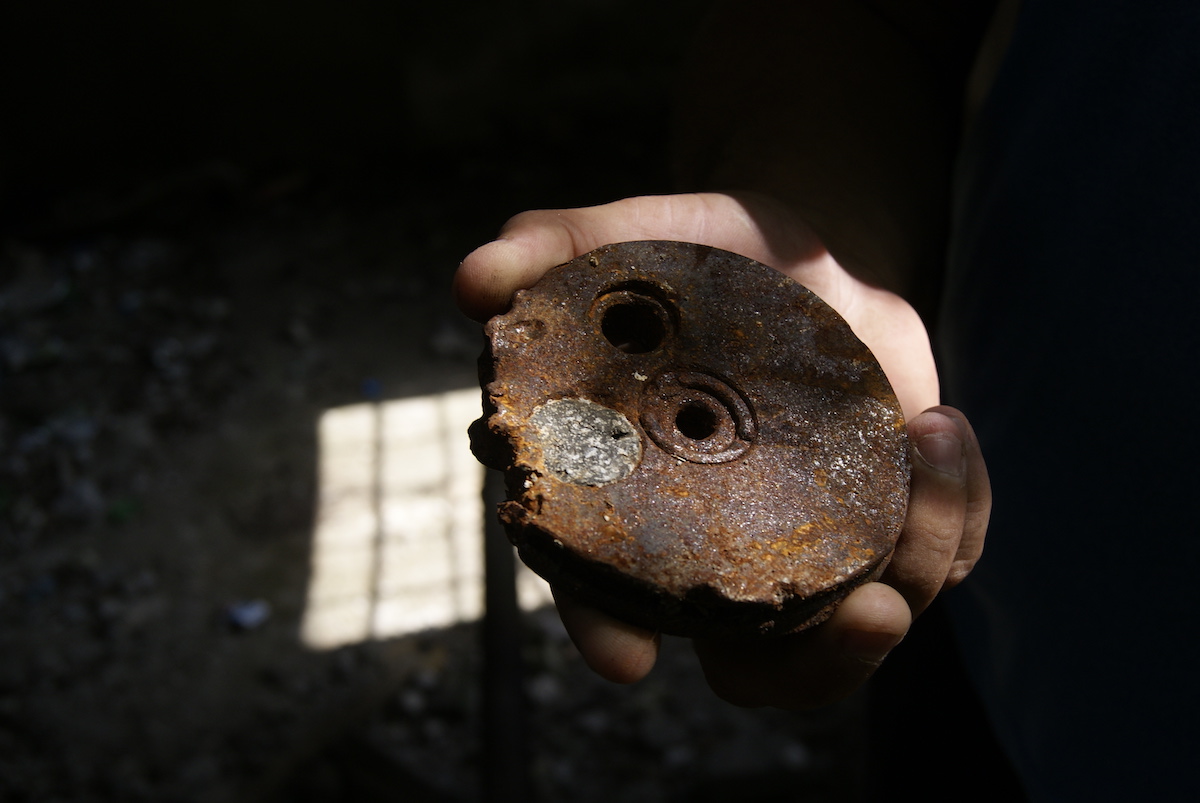 Life is improving in the Abkhaz village of Primorsko, where an army munitions warehouse exploded earlier on the 2nd of August. Tourists have once again been lured to the local hot sulfur springs. Not all is safe in the vicinity, however. Sappers continue to check the surrounding areas and constantly find unexploded shells scattered long distances away from the site of the explosion. A JAMnews correspondent visited the area and told what he learned and saw.

Witnesses of the explosion

Residents of a five-story building in the village, located at 1 Arsaul Street, 700 meters from the warehouse, say that everything happened abruptly.

“It was about half past four in the afternoon. It was hot, as usual, and nearly no one was on the street. Suddenly our neighbor’s son, Hasik, ran into the yard and started shouting that everyone should leave the house. A fuss began, and immediately a loud explosion was heard. After that, we ran to the side of the road in a state of shock. Only then did we understand what happened. At first, we thought war broke out,” said Aida, a resident of the building.

At the time, her 15-year-old daughter was at a friend’s house nearby. Aida didn’t know, so for nearly an hour she tried to get in touch with her. After some time, the girls were brought back by car, unharmed.

“It was a very powerful blast,” added Aida, Artemiy’s neighbor. “The windows and doors of houses rattled, ceilings and home appliances were damaged. Shards of munitions were lying in the yard. Everything has been restored now. We never thought that this warehouse could explode. We weren’t worried about it – we didn’t know what was in there,” he said.

The first explosion was on 2 August 2017 at a military ammunition warehouse located near the village of Primorsko in the Gudata district, which caused a powerful blast. Explosions then continued for three days. At least 64 people were injured, three of them children, with two women dead. The blast and debris damaged homes and cars in a 1.5-kilometer radius.

The Military Prosecutor’s Office has initiated a criminal case under Article 358.3 ‘Violation of the rules for the handling of weapons and objects presenting an increased danger to others’. The investigation has not yet determined the cause of the explosion. 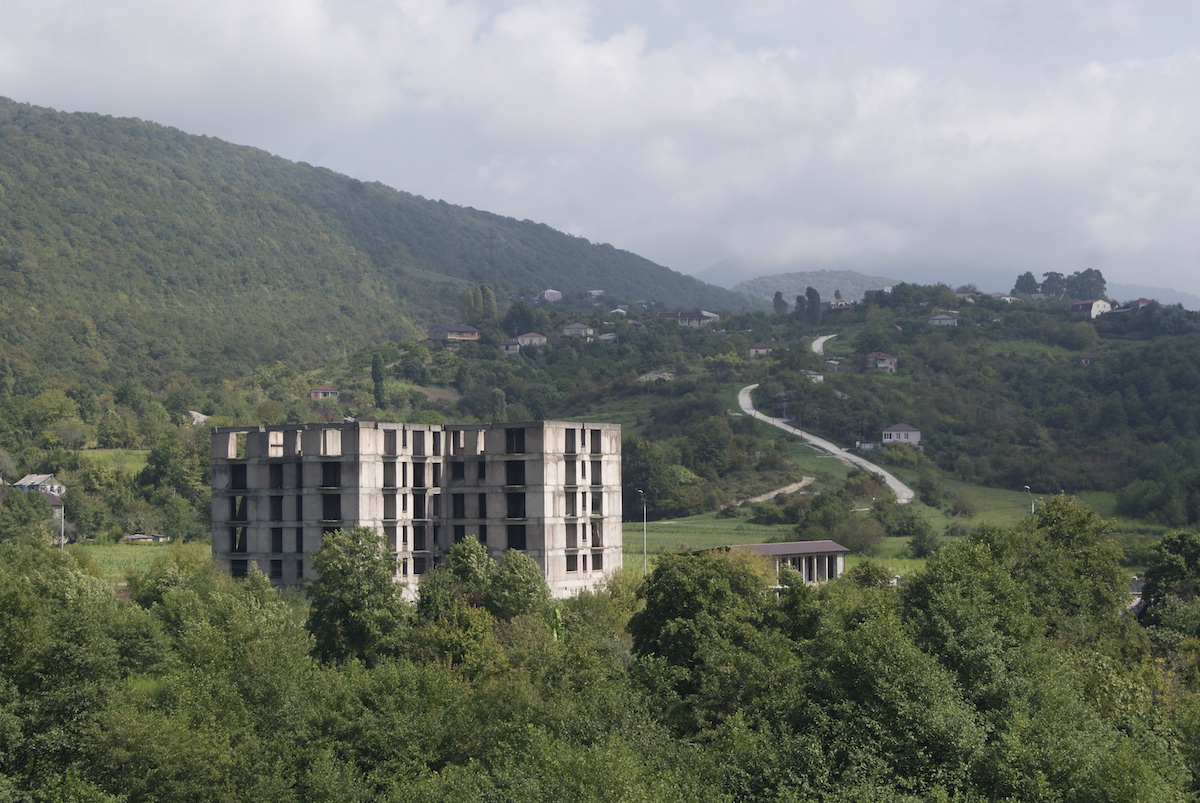 The most complex objective

British charity and American non-profit organization “HALO Trust”, which deals with the clearance of landmines and unexploded bombs, has been working on-site from day one. A representative of the organization, Ismet Zadeh, said that soldiers have already defused more than 7,000 munitions since the explosion. By his estimation, it could take up to two years to completely clear the area of shells.

“The priority for us is residential areas, arable fields, and meadows. Then the warehouse itself. Further on, hard to reach places. Until 14 August, we just drove and collected ammunition which was openly lying on roads, houses, in yards, and on the roofs of cars,” he said.

Initially, 12 people took part in the search and disposal of ammunition. Then the group grew to 49 people. 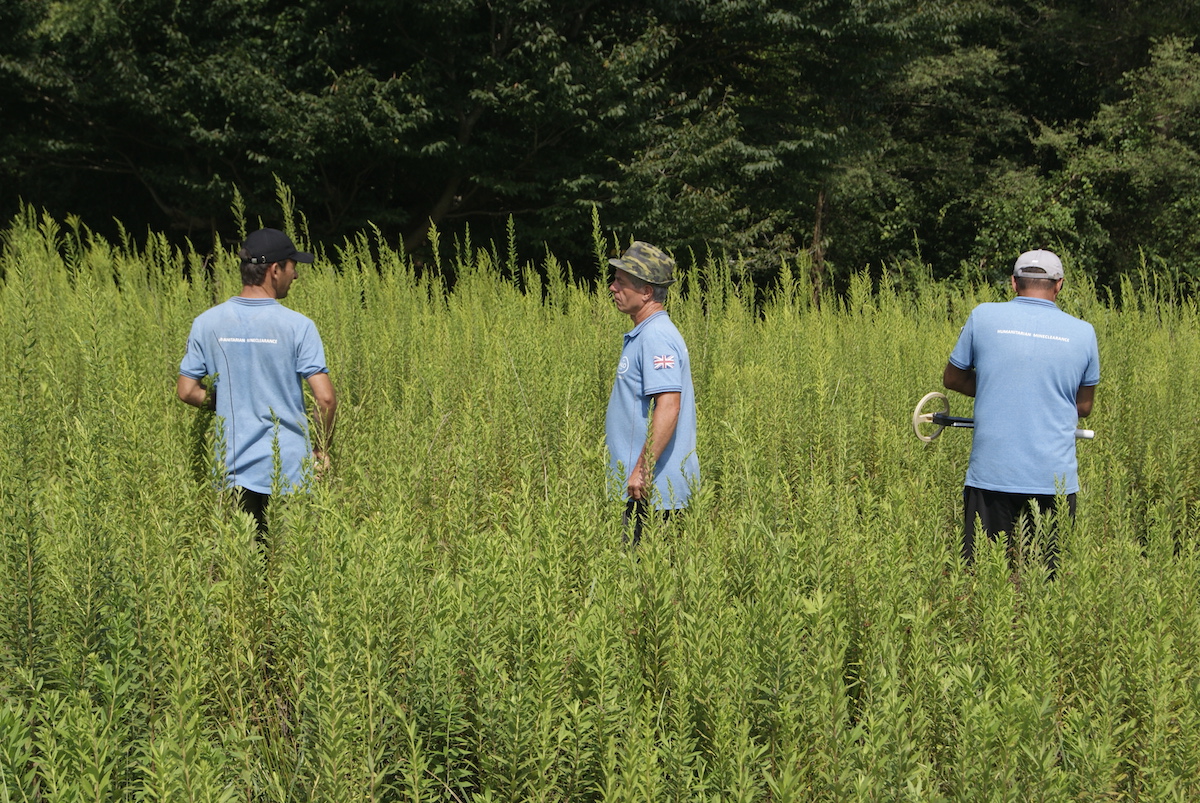 A few years after the Georgian-Abkhaz war, from 1997 until 2011, the HALO Trust sappers cleared 336 minefields and defused 9,788 mines, and about 50,000 munitions. Ismet Zadeh said that the most important sources of information about mines were captured Georgian maps given to them by the Abkhaz Ministry of Defense, as well as information from local residents.

Before the arrival of the HALO Trust in Abkhazia, there were 479 explosions, 110 of which killed people.

Ismet said that today’s work in Primorsko is some of the most difficult in his experience:

“The difficulty isn’t only that there is a large amount of diverse ammunition and a large area with hard-to-reach places, but the fact that this is a settlement.”

At the entrance of the village of Primorsko, signs hang indicating the way to the hot springs. There is also a warning to be careful, and in the case explosives are found, to call the specified numbers on the board. An ammunition disposal officer, Temur Azhiba, has extensive experience in this area – he has been working in the HALO Trust company for 19 years.

“See where the pegs are? Before them it is safe, but don’t go behind them. At one time, residents thought that the mines were under the pegs, but we reassured them and explained it to them,” he said.

Despite the fact that the road to the waterfall, a favorite place for vacationers, has been cleared of shells, the entrance is still off-limits. There are still unexploded shells and mines in the water and bushes around it. 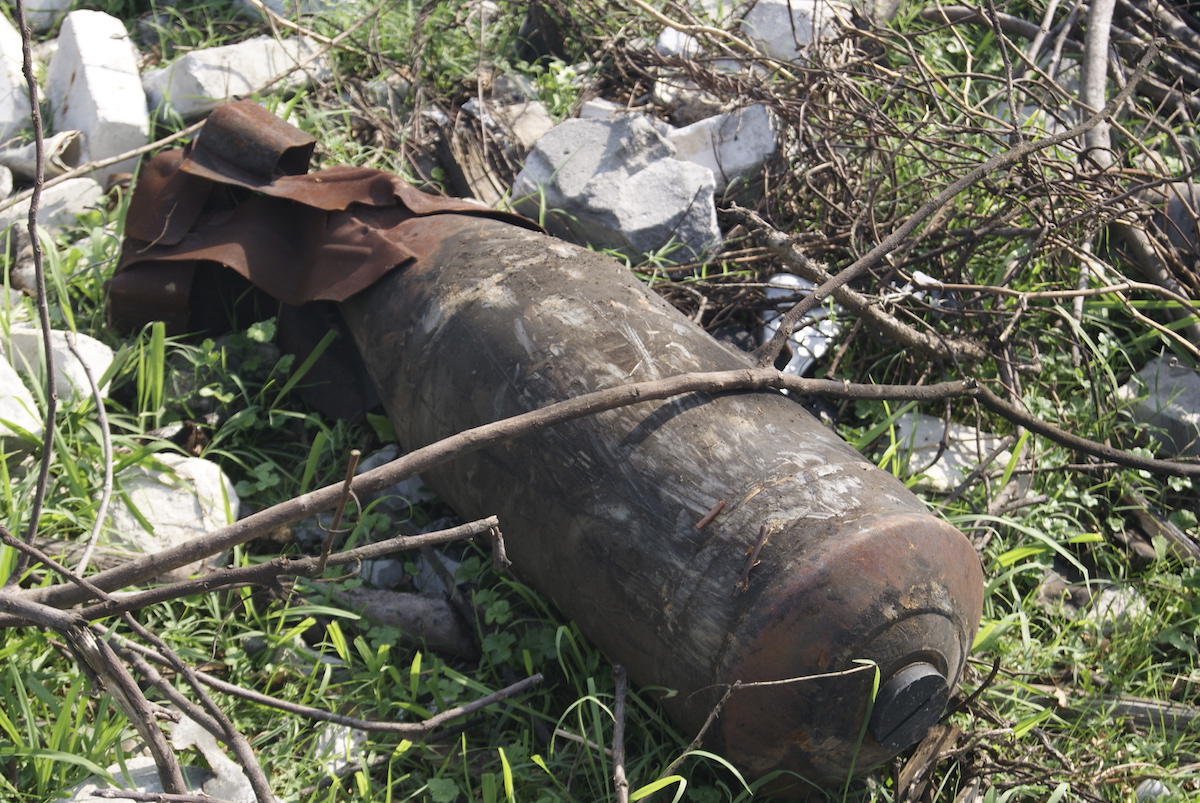 Cows were not harmed

We were in a huge meadow where cows grazed. Sappers have a short “smoke break” once per hour. Some smoke, some just relax. The work day lasts from 9am to 3pm. Lunch is only twenty minutes. During the three days when the shells exploded continuously, not a single animal was injured, even though it was daytime, and the distance from the ammunition warehouse to the pasture is only about a kilometer.

“Cows are calm. A shell fell near one, it looked in its direction, walked five meters away and continued to chew grass. Sheep are skittish. Some rustle and they immediately run away,” said Temur.

The field and pasture have been completely cleared.

Go to top
S appers say that the most difficult aspects of this work are the weather and underbrush.

“When we find a mine, we look at what condition it’s in, and report that to management. We detonate complex ammunition on the spot. Ordinary munitions are taken to the shooting range and destroyed there,” said Aslan Adleiba, field commander of the sapper detachment. 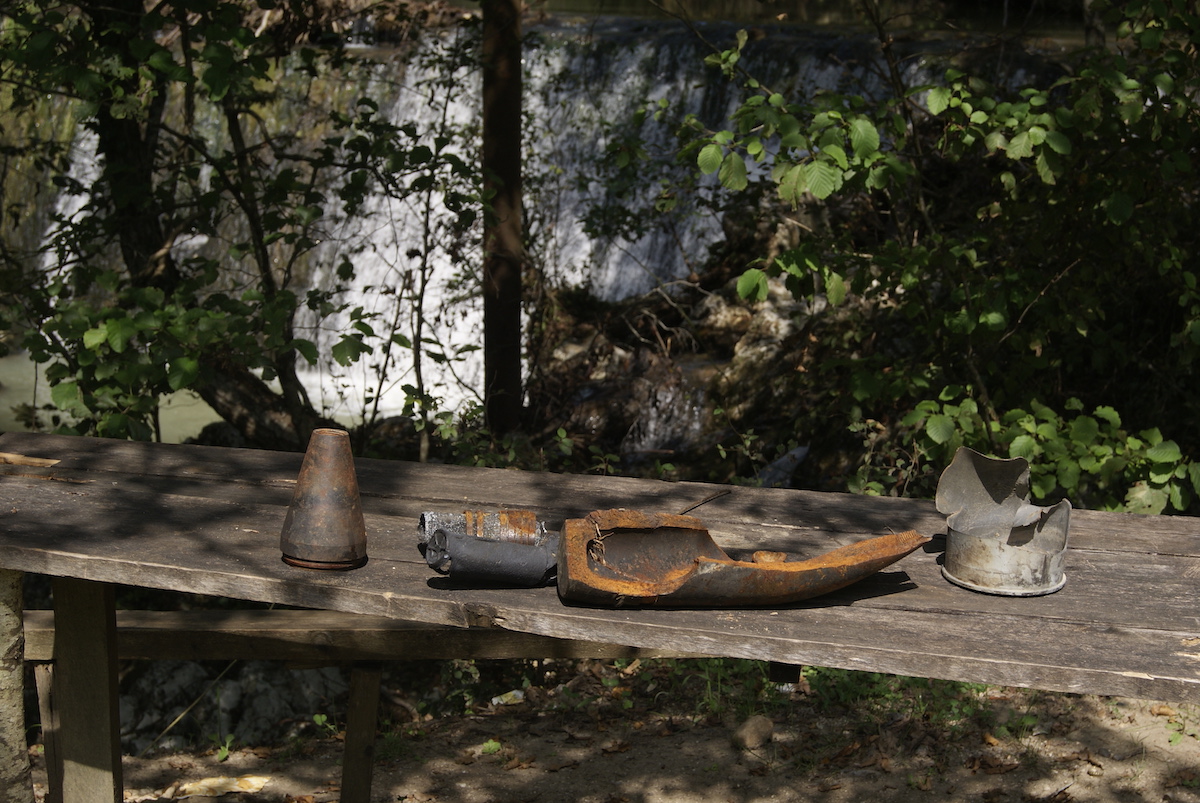 Epicenter of the explosion

The ammunition warehouse had been in Primorosky since 1973. Now in its place – a huge pit. Surrounding it, scorched and torn up trees. A piece of burnt saddle lies by the road. In approximately the same spot, two female tourists from Saint Petersburg were killed. They had set off on a horseback tour and were riding past the warehouse at the moment of the explosion. 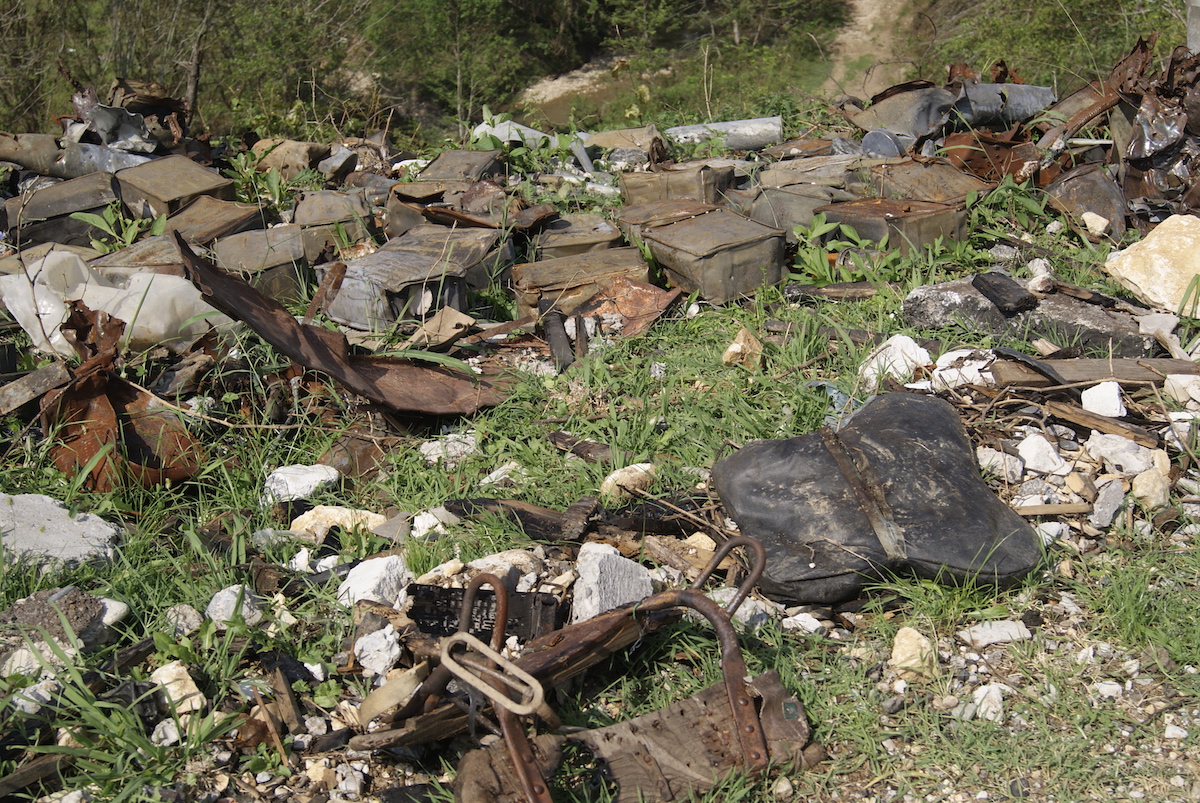 “They had a little boy with them, about 12-14 years old. When the first explosion went off, the shockwave pushed him far to the side, and the women fell here. Rescuers couldn’t reach them because it was simply impossible. They were pulled out the next day, when the explosions ceased, but they were already dead,” Temur said.

There are warning signs along the road, and every five meters there are red and white bricks. The entire area going deep into the forest is dangerous, except for the road. Along the roadside, there are fragments of ammunition, a lot of unexploded mines and shells, as well as thousands of machine guns, submachine guns, gas masks, and cartridges. The military is on duty in the area.

Toponyms and terminology used by the author, as well as views, opinions and strategies expressed by them are theirs alone and do not necessarily reflect the views and opinions of JAMnews or any employees thereof