Love has triumphed over hate

What has Clooney to do with ‘Aurora’?

The posters with the inscription: ‘I was saved by the ‘Aurora’ hero that have recently appeared in the streets of Yerevan have been neither ripped off nor drawn over, but not as a result of indifference. The posters were incomprehensible only to tourists, but the locals eagerly explained to them: ‘Aurora’ is a prize. Moreover, everyone was inspired by the upcoming visit of the Hollywood celebrity, George Clooney. He was expected to hand the prize over to the ‘Aurora’ laureate. About the ‘Aurora’ prize

The ‘Aurora’ Prize for Awakening Humanity was set up as part of the 100 LIVES global initiative and the Armenian Genocide laid the foundation for it.  About 1.5 million people perished during the Armenian deportation from the Ottoman Turkey in 1915.  Only a few people managed to survive thanks to the individuals who showed courage and saved them, as well as due to humanitarian missions.

The title ‘Aurora’ was come up with on a whim. This is a name of one of the who experienced hardship in 1915. Arshaluys (Aurora) Mardiganian managed to survive.  Eventually, she described what she had been through in her book, entitled ‘Ravished Armenia,’ and had a starring role in the film based on the book.  All the funds raised from the film screening ($30 million US) were donated to provide relief to 60,000 Armenian orphans that remain in the Middle East.

People in Armenia have not forgotten the developments that took place one hundred years ago.  Armenians are known in the world scole also due in part to those who managed to survive the genocide.  Their descendants have not forgotten about what happened to their next of kin; Armenian authorities demand world recognition of the Armenian Genocide, calling on Turkey to stop rejecting the reality in order not to be an accomplice to the crime committed in the Ottoman Empire. Who founded the ‘Aurora’ prize and why? As a victim of a crime against humanity, Armenia calls for prevention of new tragedies through disclosure and condemnation of the past cases of wrongdoing. This very idea was taken as the basis for the 100 LIVES initiative by its authors, businessmen Ruben Vardanyan and Noubar Afeyan, as well as president of the Carnegie Corporation of New York, Vartan Gregorian. Having introduced the ‘Aurora’ Prize they, on behalf of survivors of the Armenian Genocide, express gratitude to those who risked their lives rescuing Armenians. But the ‘Aurora’ Prize is not just limited to the Armenian tragedy. It aims to raise public consciousness about atrocities occurring around the world and rewarding those working to address these major issues in a real and substantial manner. The “Aurora Nominees and Selection Committee

They have had to choose among the following nominees:

• Dr. Tom Catena, the only resident physician practicing in the Nuba Mountains, southern Sudan, responsible for the health of 500,000 people amidst non-stop shelling;
• Syeda Ghulam Fatima, who rescued thousands of Pakistanis, including children-the victims of bonded labor at the brick kilns. Due to that, she has been a target of a series of assassination attempts.
• Father Bernard Kinvi, a Catholic priest, who provided refugee and medical services to representatives of the warring Seleka rebel group and the anti-Balaka militia;
• Marguerite Barankitse, who saved 30,000 children in Burundi and founded a shelter for them.

Who got the “Aurora Prize

‘Love has triumphed over hate,’ said Marguerite Barankitse when accepting from George Clooney the first ever ‘Aurora’ prize, awarded for the loyalty, courage and significance of her actions.

Marguerite Barankitse set up the ‘Maison Shalom (House of Peace) shelter for 30,000 children, orphaned during the ethnic cleansings in Burundi, Rwanda and the Democratic Republic of the Congo in the 1990s. It was precisely on April 24 last year when she fled Burundi, as she was subjected to political reprisals. She is now convinced that the prize will help her break the chain of violence.

As the first “Aurora Prize Laureate, Barankitse will be rewarded $100,000 US, which she is going to donate to her colleagues to assist the children in need.

She will continue the cycle of giving by donating the accompanying $1,000,000 US grant to the humanitarian organizations that have inspired her work. ‘For me, this award is, first and foremost, an opportunity to challenge the wrongdoing of Burundi politicians. This will make them realize that people should not be ousted and mothers and women should not be turned into exiles.  All criminals must ask themselves whether they are doing the right thing?  I have no hate but rather compassion for the Burundi president, who is commiting murders, or for any other criminals for that matter,’ said the prize laureate.

The Selection Committee has assessed Marguerite Barankitse’s activity as dangerous and, at the same time, as of exceptional value and impact.

As George Clooney stated at the inaugural “Aurora Prize ceremony, none of the nominees had graduated from a ‘super’ school. They were just everyday people who realized the need for their help and responded. ‘Today we honor them. And in doing so we honor the 1.5 million lives that were lost 101 years ago.  Furthermore, we honor those lives by calling their tragedy by its true name-genocide.  The Armenian Genocide.  ‘Hitler once famously said, ‘But who remembers Armenia?’  ‘The answer is-the whole world, that’s who, said the actor. 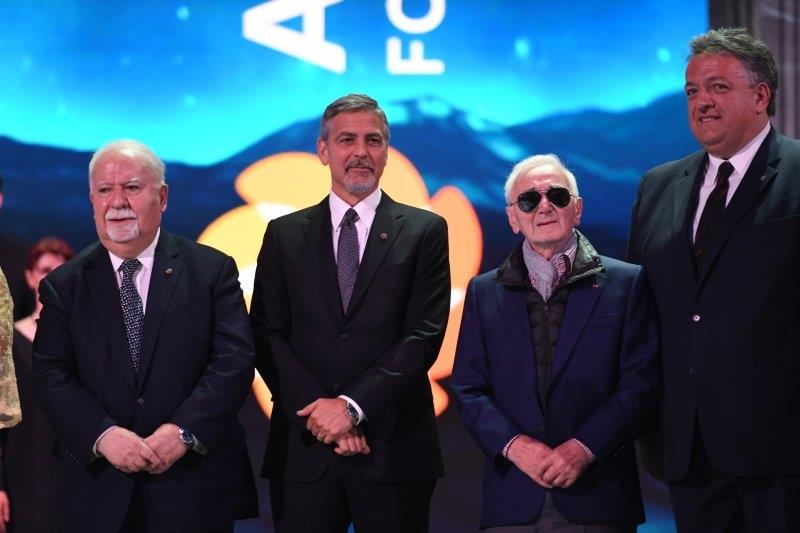 Clooney stressed that crimes against humanity should be prevented in future.  “It happened to Armenians starting 101 years ago and we’ve seen it repeated all over the world since: Germany.  Cambodia.  Bosnia.  Rwanda.  I’ve seen what mankind is capable of at its worst.  But I’ve also seen something else, something much stronger than hate.  I’ve seen bravery and kindness and incredible acts of love.  Tonight we celebrate the best examples of that, the Hollywood celebrity stressed. Marguerite Barankitse has admitted that her only dream is to send the children from her orphanage around the world with the ‘never again’ mission.  ‘If I can send the children to different countries, so that they could see what is going on in the world, they may be able to prevent another tragedy, since saying ‘never again’ is hardly enough-genocides happen recurringly and the crimes don’t stop,’ said Marguerite Barankitse.