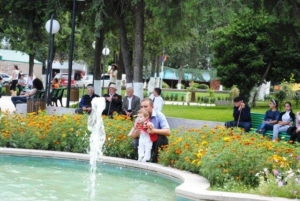 A transitional-stage presidential election is scheduled in Nagorno-Karabakh for 19 July. Two candidates will stand in the presidential race: the incumbent President, Bako Sahakyan, and NKR Parliament member, Eduard Aghabekyan.

A presidential system of government has been approved in Karabakh as a result of a constitutional referendum held on 20 February 2017, with the system coming into effect in 2020. However, under the new Constitution, for the next three years Karabakh will be governed in a transitional stage mode. At this stage, the Nogorno-Karabakh Republic (NKR) will be ruled by the president, who will be elected by the NKR Parliament.

Three out of five political forces – the Karabakh-Free Motherland, Artsakh Democratic Party and Armenian Revolutionary Federation ‘Dashnaktsutyun’, support Bako Sahakyan’s candidacy. The ‘Movement-88’ faction, which enjoys three seats in Parliament, naturally supports its leader, Eduard Aghabekyan. On a side note, Aghabekyan held the post of Stepanakert Mayor from 2004-2007, and served as the Prime Minister’s adviser in 2008.

The ‘Revival’ opposition faction is the only political force in Karabakh who has not nominated any presidential candidate. Hayk Hanumyan, the only representative of the faction, hasn’t decided on his choice yet. As he told mass media, he would definitely vote against the incumbent president. However, he hasn’t decided yet whether he will support Aghabekyan or not.

“I think Aghabekyan stands little chance of winning the election. As you know, the President will be elected by the Parliament, and the three political forces that make up the majority in the National Assembly support Bako Sahakyan’s candidacy. Anyway, it’s good that there is an alternative,” he said.

Representatives of the three political forces that support the incumbent president said that their decision wasn’t unexpected at all, as they had backed Bako Sahakyan in two previous presidential elections as well. The ruling wing MPs claim that Bako Sahakyan is thus given an opportunity to proceed with unfinished matters.

Back in the period of constitutional reforms, the Karabakh opposition claimed that everything was done to expand Bako Sahakyan’s term in office, and that the aforesaid plan was carried out in plain view.  The opposition believes that the new constitution will allow Sahakyan to be nominated as president after 2020, which actually means that there will have been no change of power in over a decade.

Eduard Aghabekyan noted that, despite certain problems in NKR, he was satisfied with Bako Sahakyan’s ruling in general. He admitted that he himself didn’t stand much of a chance to be elected as the NKR President. However, he pointed out that the reason he was standing in election, was to raise and voice the existing problems in Karabakh.

Armenian politicians also expressed their opinion with regard to the ongoing political processes in Karabakh.

According to Eduard Sharmazanov, the Armenian National Assembly Vice-Speaker, the democratic principles will, in no way, be violated if Bako Sahakyan maintains the President’s post until 2020. “Franklin D. Roosevelt (32nd President of the USA) held the President’s post from 1932, and was re-elected four times. The USA can’t be blamed for the lack of democracy in that period,” said the Armenian Parliament Vice-Speaker.

Suren Zolyan, a political analyst, stated in turn that a transitional-period presidential election in Karabakh wasn’t a political process, but rather a trivial procedure that was done as part of the preliminary plan. “I would like to meet a person with a different outlook who doubts that Bako Sahakyan will be elected, and who thinks that someone else will be elected instead,” Zolyan said ironically.

Toponyms and terminology used in the publication, as well as views, opinions and strategies they contain, do not necessarily reflect the opinions of JAMnews or any of employees thereof. JAMnews reserves the right to delete comments it considers to be offensive, inflammatory, threatening or otherwise ethically unacceptable