It is cold and lonely outside

The guard by the entrance checks my documents. Sudies the photo and my face. Then lets me in. I am at the shelter for the homeless.

It is the only place of its kind in Tbilisi, and it was brought into good shape about a year ago. The place might remind one a students hostel, but it is not. The lodgers – 5-6 in one room – are brought as a rule by patrol cars. Some come on their own, especially in winter, when it is so chillingly cold outside. Maia Akhrahadze, the social worker, calls them: beneficiaries”.

Theresa had been living in the tent settlement in Vazisubani, the bedroom community in Tbilisi, and was one of the first to come to live in the shelter, built by the mayor`s office.

“We were renting a room together with my mom. I could not pay for it after mom died. That is how I found myself on the street. Police took me to the tent settlement. This place is very good, I am getting my medicines here”, Theresa says.

Theresa has epilepsy. She knits bracelets from beads and studies English.

The shelter is situated on the outskirts, near the famous Lilo shopping mall. The neighborhood is crowded at day and quiet at night. At the moment 105 people lodge at the shelter. It is capable to accommodate 240, but there has been more than 160.

More people come in winter, especially when the temperature falls below zero. But many come (or are brought) and soon leave, not willing to obey the rules. And come back with the new frost.

Nanuli is 79, and she does not see well. She is to have an operation soon, and her neighbors dream that it is a success (nanuli prays for it before going to sleep).Her son got drowned in the sea several years ago, and she has no other relatives.

She has been living in the monastery for some time, but it is already 3 years that Nanuli has nowhere to go. Finally she chose the shelter. Now I have friends and interesting acquaintances, Nanuli says.

Mentality of a homeless person

The most interesting place at the shelter is the psychologist`s room, full of drawings and hand-made articles. Psychologist Ani Subari says most of lodgers have mastered the new crafts here.

“Their psychological state and potential vary. Often they are prone to aggression, and cautious approach is demanded. Some are excessively sensitive. Each has his or her tragic story to tell. To all of them we propose art-therapy, an excellent method to relax and stay calm. We came to trust each other with my patients, and they are enjoying self-realization”, Ani Subari says. 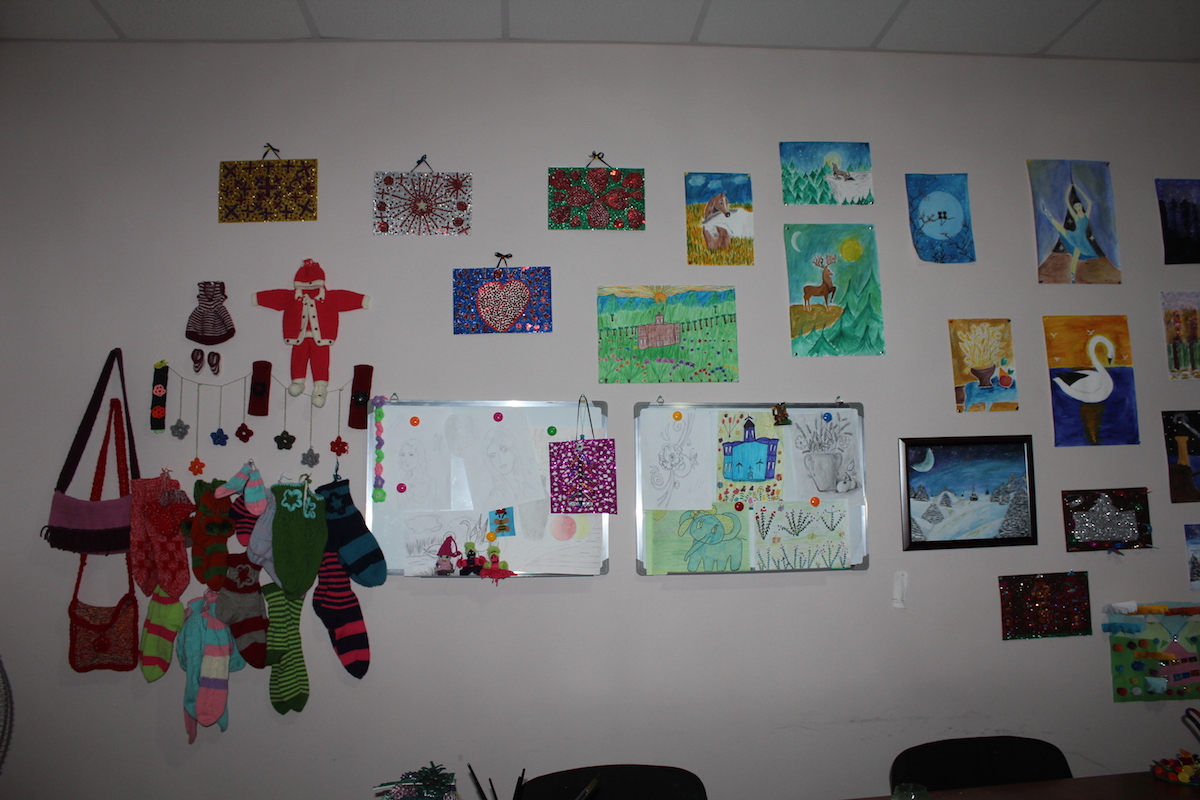 Health of a homeless person

The rules of admittance here are the same as in the tent settlement. Some are brought by police, some by relatives or friends, some come voluntarily. All the newcomers are being interviewed, and then are either let to stay, or not.

The rules are strict enough. Those, who want to stay at the shelter, must 1. Be out of age 2. Be registered in Tbilisi for at least 2 years 3. Have no property 4. Be capable of taking care of himself.

Another strict rule says: no alcohol or other stimulators addiction. The first breach of this rule is punished by the protocol, the second case means immediate exclusion without the right to return.

“We diagnose and treat them. But the medicines are given to them only here, in the doctor`s room. Some of our clients are ready to go far, and full control is a necessity”.

All lodgers receive towels and means of hygiene. Each has a personal closet. Bed cloths are changed once a week – under the condition, that one carries the used cloths to the laundry himself.

Grandmother Izo is a former pharmacist, she has been working in a drugstore for years. Izo came to live in the shelter a month ago. She does not want to tell her story. Izo put her properties on the bed – a book, a photo of herself as a young girl, a mirror and lipstick. She has always liked to smarten up, Izo says.

The social workers have come to work at the shelter in October 2016. As Maiya Akhrakhadze told us, she and her colleagues are now working on “bio-psycho-social passports”. After the work is completed, each of the lodgers will be offered an occupation.

Though some have jobs already. All they have to do is to inform the shelter management of their schedules and receive the passes.

A fair-haired woman writes in a notebook. Jiliet Iluridze is 58 and she is learning Italian. One of the shelter staff is the teacher of Italian. Jiliet has made up her mind to learn it. Five lessons have already been taken.

Juliet does not have a family, she came to live at the shelter four months ago. “I was deceived  by the crooks, who stole my apartment. The case is under investigation now, and the mayor`s office proposed me a place in the shelter for the time being”, she says.

Nargiza is watching a movie on TV. She came to live at the shelter long ago from the tent settlement. Her husband also lives here, but in a separate block – there are no family rooms.

“I have children, but they are at the boarding school now. We have never had an apartment of our own, but the local authorities have been helping us to pay the rent. Then something has changed, and we have nowhere to live now. And there is no way out”, Nargiza says.

Gocha Mindiashvil, the shelter director, is very grateful to the recently established Donors Service, through which an unnamed American company gave three washing machines to the shelter.

But the major source of help remains the mayor`s office. Salaries, medicines and everything the shelter needs is being paid for from its budget.

The dining room is very clean with a slight smell of bleaching powder. Mziya, the director – tall, unsmiling woman – is compiling the winter menu.

“We feed them twice a day. There are special meals for the sick and diabetics, who are allowed to take some food with them”, Mziya says.

The last Ne Year eve was the real holiday for the people, who had just moved into the shelter from the tents. They are now preparing to meet 2017 with surprise gifts, lots of fruits and sweeties.