In expectation of ‘Restart’

A rapid development of Armenia-Iran relations, both political and economic, was observed after recognition of Armenian’s independence.

However, a pace of development of the economic cooperation slowed down end of 2000s’ due to the imposed sanctions against Iran. Yet, since early this year, after the sanctions were lifted, both countries have resumed talks on possible intensification of bilateral relations, new programs and opportunities. Many expect that lifting of sanctions will lead to a ‘reset’ of Armenia-Iran commercial and economic relations for the mutual benefit of both countries.

However, before we start talking about the prospects, let’s take a brief look at the present-day picture and the history of commercial relations.

So, according to the most up-to-date data (January-August, 2016), Iran is ranked 5th among Armenia’s trading partners. It’s share in Armenia’s overall foreign trade makes 5,1% (Armenia has greater commodity turnover with Russia, China, Germany and Georgia).

The volume of Armenia-Iran trade turnover made US$157,6million in January-August, 2016. Export from Armenia to Iran in the reporting period made US$48,9million, whereas Iran exported US$108,7million worth goods. In other words, trade with Iran has a negative balance: import rates exceed export rates.

It is noteworthy that Armenia-Iran trade turnover has dropped by 13,3% as against last year, while export to Iran has decreased by 9%, import – by approximately 15%.

A drop in trade turnover is partially conditioned by deflation, and partially by worsening of the overall economic situation in Armenia.

In 2016, the European Union has lifted a ban on financial communication with Tehran. This implies that Iranian banks can now open their representations in the EU countries, and the European banks – in Iran. Iranians can again avail themselves of the SWIFT international system. In addition, all restrictions on rendering financial assistance to this country have been also lifted.

The EU has also lifted a ban on imports of oil and oil products from Iran, which was imposed in 2012. In addition, a ban on provision of Iran with equipment and technologies, necessary for oil industry, has been also lifted. Tankers for oil transportation can also be sold to Iran now.

The USA has also lifted similar financial and commercial restrictions. Passenger plane sales to Iran has been also permitted. At the same time, the EU countries have been also allowed to sell planes to Iran and Tehran has already expressed intention to purchase Airbus and Being planes. Moreover, Iran’s international accounts, that were frozen a few years ago, have been unblocked.

Namely, the matter concerns Iranian Central Bank funds (over US$20billion) and oil revenues. Iran will again have access to the sum amounting to about US$100billion.

What does Armenia import and export

Overall 300 denominations of commodities (unified groups) have been imported to Armenia.

Natural gas accounts for the largest share of turnover. In H1 2016, Iran exported US$31,4million worth (186,5 million cub.m.) natural gas to Armenia, which is over 40% of the total import from Iran. Armenia doesn’t pay for gas in cash, but instead it provides Iran with electric power. Alongside the natural gas, Armenia also imports Iranian sulfides (6,1% share in import), polymers (5,9%), fertilizers (5,1%), oil and oil products (4,8%) etc. In other words, except for gas, the rest of imported goods are rather diversified.

What does Armenia export to Iran?

This means that the goods that are imported from Iran are far more diversified than those exported to Iran.

The chart below clearly shows the dependence on a single commodity item in terms of import and export. 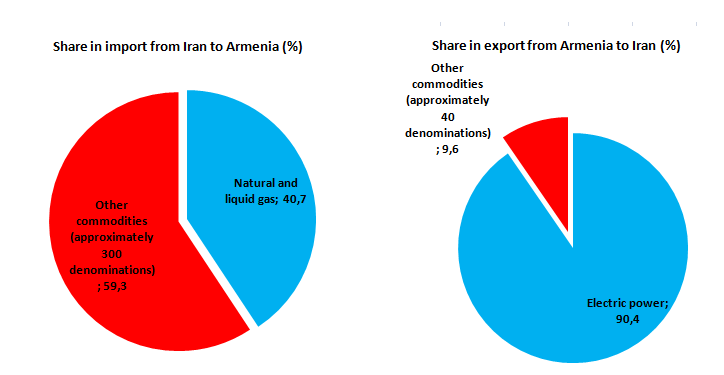 Source: Customs Service of the State Revenue Committee of Armenia

How has the trade between Iran and Armenia developed since 2005

After 2005, there was a sustainable growth in Armenia-Iran foreign trade turnover, except for 2009 crisis year. Total commodity turnover increased almost trice: from US$117,7million up to US$323million.

At the same time, a scheme of electric power supplies in exchange for natural gas took its effect in 2009. In other words, a reciprocal growth of trade in 2005-2009 was not related to that factor. 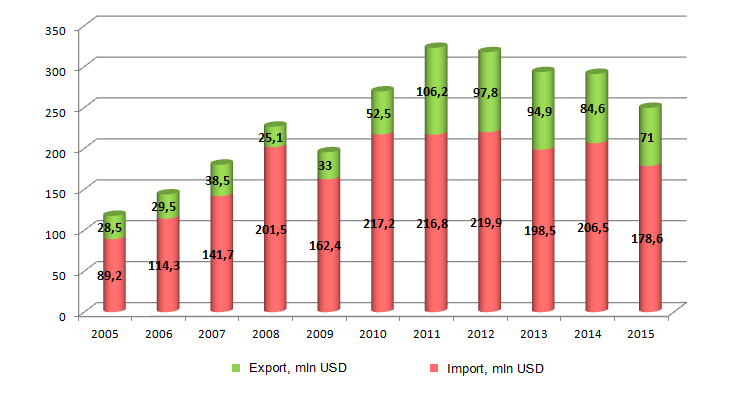 Sanctions were imposed on Iran in 2012. This affected the official trade rates: the decline began, which continued in the ensuing years.

2015 data cover the period from January till November, since December data hadn’t been presented by the time this article was written.

After Iran was lifted sanction, Armenia has started active discussions on possible intensification of the economic relations, as well as on economic benefits that could be gained from it.

As far as the foreign trade is concerned, there is an opinion that the foreign trade volumes will increase again (like it was before 2011). It will probably be so in terms of imports from Iran. However, when it comes to exporting goods to Iran, especially in view of the general structure of Armenia’s export, we can’t be that optimistic. The matter is that Armenia now has no serious assortment that could be offered to the Iranian market.

However, Armenia could serve as an intermediary between Iran and the Eurasian Economic Union, between Iran and Georgia. For example, negotiations on possible supply of Iranian gas to Georgia through the territory of Armenia were launched almost immediately after lifting the sanctions. However, no serious steps have been made in this regard so far.

A program on transportation of Iranian goods via Armenia to the European market and vice versa is also promising. Railway is a perfect variant: the Armenian government has been long cooperating with Iran for construction of the railway. However, execution of such construction is a costly affair that requires huge investments and a lot of time. Therefore, a far more realistic option is being considered at this stage.

Under this option, Iranian cargo will be delivered to Armenia’s Yeraskh railway station by motor vehicles. Then it will further transported by Armenian railway to the Georgian Poti sea port, and afterwards, to the European market. Vardan Aloyan, the South Caucasus Railway (SCR) official, recently pointed out that it was an appealing idea for the Iranians and that there were extensive discussions on this issue.

Tourism sphere is the most important trend of development of Armenia-Iran economic relations. Experts believe, it has great potential. At this point, Iran is already Armenia’s major partner in this field.  In particular, the vast number of Iranian tourists are visiting Armenia during Novruz Bayram holiday. 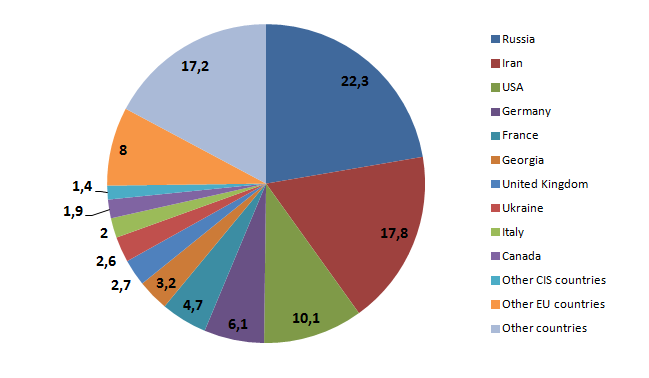 At the same time, the number of Iranian tourists has considerably increased (by 50,2%) as compared with H1 2015. Iran is ranked 1st in terms of the growth rate.

Certainly, these are hardly all fields of cooperation that have the development potential. Experts also see the prospects for effective cooperation in the energy and banking spheres. However, an unfailing and efficient policy is required to turn this potential into development.