Highlights of the U.S. Vice President’s visit to Georgia

Air Force 2, the U.S. Vice President’s plane, landed at Tbilisi International Airport at 7 p.m., on 31 July. Mike Pence, the U.S. Vice President, the first top official in President Trump’s Administration, arrived on official visit to Georgia. The Georgian Prime Minister, Giorgi Kvirikashvili and the U.S. Ambassador to Georgia, Ian Kelly, met Mike Pence and his wife, Karen, at the airport. Journalists and Tbilisi residents also gathered outside the airport to greet the U.S. guests. They were standing behind specially installed fencing, in 37-degree heat, waving U.S. and Georgian flags. 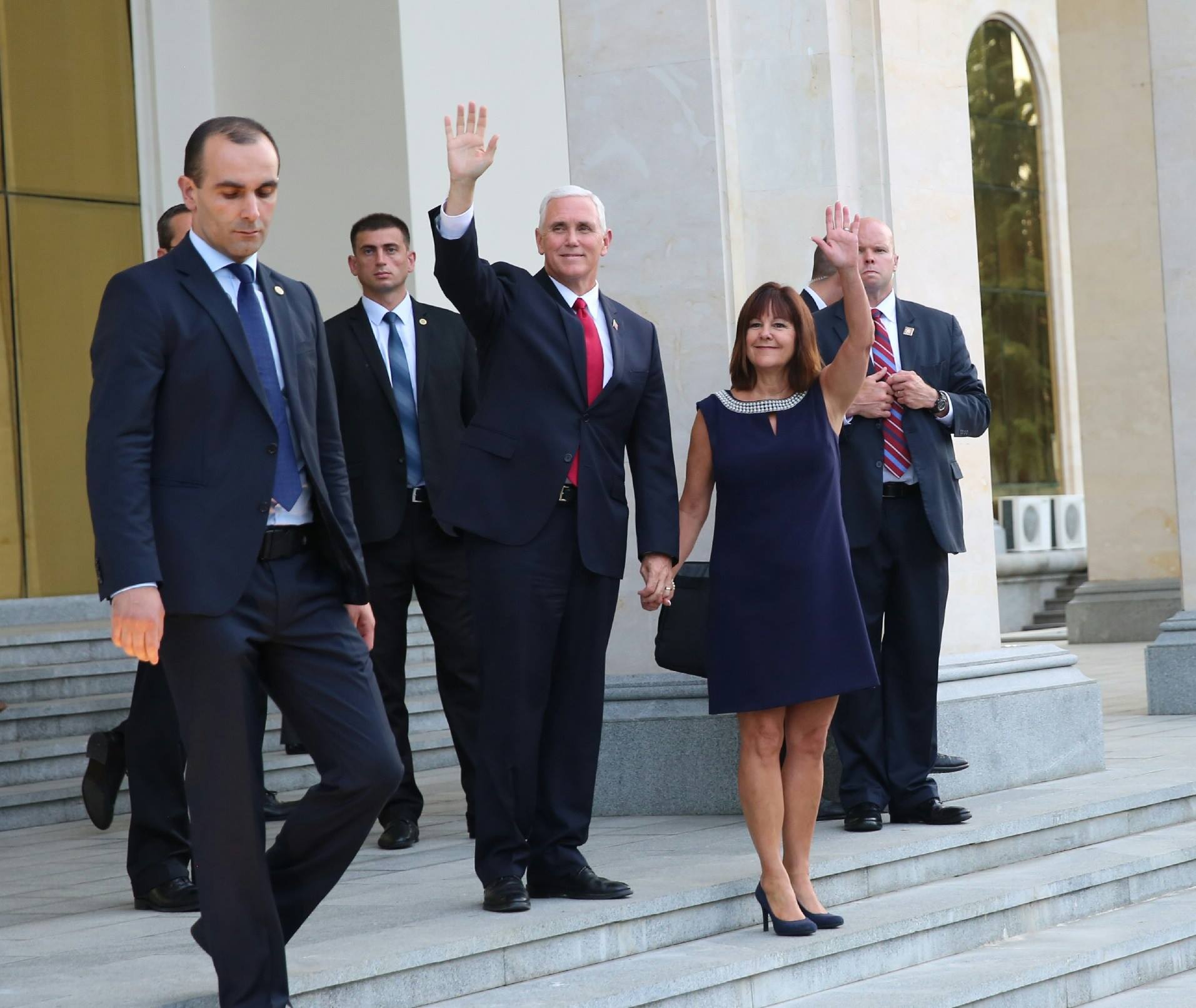 Georgian TV channels were operating in emergency mode, providing detailed coverage of the visit. The TV viewers were able to watch how the Vice President’s plane landed at the airport. Then, Mike Pence and his wife walked the red carpet and a concert band performed the two countries’ national anthems.

All the euphoria over the visit of a high-ranking guest resembled the situation some 12 years ago, when the then U.S. President, Georgia Bush, visited Georgia.

Tbilisi made special preparations for the visit. Europe Square, the Metechi Bridge and the TV broadcasting tower were lit up with Georgian and U.S. flag colors. The U.S. flags were put up in the capital’s central avenue.

From the airport, Mike Pence traveled to Mtatsminda funicular for an official dinner. During the dinner, the guests enjoyed Georgian folk songs and the Georgian Premier and the U.S. Vice-President proposed a toast for the two countries’ friendship.

What was said at the joined news conference

Speaking at a joint news conference following the meeting with the Georgian Premier in the Government’s Administration, Mike Pence once again reiterated USA’s support to Georgia. According to the U.S. Vice President, the USA stands ready to further intensify bilateral cooperation with Georgia.

Mike Pence repeated on a number of occasions that President Trump was soon going to sign the Senate’s approved sanctions bill against Russia.

“It was a great honor to host you in the White House, and now it’s a great pleasure for me to visit this historic country. President Trump sent me here with a very simple message – to you, to your government and to the good and courageous people of Georgia: we are with you, we stand with you, for your freedom and for our shared values,” said Mike Pence, particularly focusing on Georgia’s history and traditions.

According to the U.S. Vice President, the USA condemns the fact of occupation of 20% of Georgia’s territory and the deployment of Russian troops 40 kilometers away from Tbilisi.

As Mike Pence pointed out, Georgia was trapped in the Soviet Union, but then that cruel regime collapsed. “Georgia extended its hand to the West and Europe and we are ready to get closer to Georgia and further strengthen our relations,” the Vice President noted.

“It’s through your assistance that Georgia is no longer either a Soviet or a post-Soviet country,” – that’s how Georgian Prime Minister, Giorgi Kvirikashvili, addressed the U.S. Vice President at the joint news conference.

In the Georgian Premier’s words, at the meeting with Mike Pence, the discussion focused on the challenges that Georgia was facing as a result of Russia’s occupation.

“The USA plays a significant role in the Geneva Security Discussions and it’s very important that, through high-level involvement, some particular solutions have been found to ensure security and de-occupation of the country’s territory, as well as in terms of political resolution of conflict,” said Kvirikashvili.

As the Georgian Premier pointed out, the discussion also focused on further intensification of the bilateral cooperation, first of all, in regards to defense and security issues.

According to Giorgi Kvirikashvili, the USA’s support is of particular importance for peaceful resolution of the Georgian-Russian conflict. Kvirikashvili termed the decision made by the new U.S. Administration and the U.S. Congress with regard to occupied regions of Georgia as ‘unprecedented’.

Mike Pence traveled to Georgia from Estonia. This is his first Eastern European tour which covers Estonia, Georgia and Montenegro. As he himself put it, he is going to deliver President Trump’s message to those countries. Georgia is the only non-member state of NATO among the aforesaid countries, which is viewed by Georgian analysts as an additional positive signal for the country aspiring for rapprochement with the Alliance.

According to Mike Pence, his key message is that the USA views those countries as major partners in Eastern Europe and that it isn’t going to tolerate Russia’s aggression.

“President Trump sent me to Europe with a very simple message. And that is that America first doesn’t mean America alone. Our message to the Baltic states, my message when we visit Georgia and Montenegro, will be the same: To our allies here in Eastern Europe, we are with you, we stand with you on behalf of freedoms. It’s a great honor to be with you,” he said in an interview with Fox News during a stop in Tallinn, Estonia.

With regard to the U.S. Vice-President’s visit to Georgia, the analysts point to some important facts. This is, first of all, the Senate’s approved bill, which provides for toughening sanctions against Russia.

The bill, which, according to Mike Pence, President Trump is going to sign soon, implies introduction of stringent economic sanctions against Russia, North Korea and Iran. This document, that has already stirred up sharp reaction from the Kremlin (Putin restricted powers to 755 U.S. diplomats, saying he is pessimistic about the chances to rapidly improve relations with the USA), also covers Georgia’s issues. As is pointed out in the document, Russia’s aggression poses serious threat to the sovereignty of Georgia, Ukraine and Moldova.

Earlier, President Trump’s Administration passed one more important document related to Georgia, that is, the U.S. federal budget law, approved by the U.S. Congress and signed by President Trump. Under this document, the USA will not cooperate with countries that recognize the independence of the occupied regions of Georgia.

The second factor underlined by the analysts is the U.S.-Georgia joint military drills ‘Noble Partner 2017’, that Georgia has currently been hosting. Servicemen from 8 NATO member and partner states are involved in the drills. Thus, this event is of particular regional importance.

Before travelling to Georgia, the U.S.  Vice President met with the leaders of three Baltic states. When in Tallinn, Mike Pence made a statement that was much expected in Tbilisi. He talked much about ‘unpredictable neighbors’, saying that ‘Russia sought to redraw international borders by force, undermine democracy in sovereign nations, and divide the free nations of Europe, one against another.’

“Under President Donald Trump, the United States of America rejects any attempt to use force, threats, intimidation, or malign influence in the Baltic states or against any of our (North-Atlantic) treaty allies,” Pence stated in Tallinn.

According to the Georgian Foreign Ministry, all the aforesaid clear statements and messages testify to the unconditional support to Georgia’s sovereignty and territorial integrity on part of the U.S. President’s Administration.

Speaking at a special briefing on 31 July, Georgian Foreign Minister, Mikheil Janelidze, pointed out that: “The message sent out by the Vice President proves that the USA recognizes Georgia as a firm ally and a strategic partner.”

Meeting with the opposition: Georgia first and America next

Mike Pence started the business part of his 2-day official visit by meeting the leaders of the four opposition parties on 1 August.

As the opposition leaders told journalists following the meeting, the discussion focused on domestic political processes, as well as on the country’s integration into the Euro-Atlantic space.

In particular, the opposition touched upon constitutional reforms, electoral system reforms, freedom of speech, the Rustavi 2 TV case, the informal rule in the country and the authorities’ excessive powers.

“I proposed to the Vice President to agree on the following formula: if for them America is first, then let Georgia be next. Whereas for us, Georgia is first and America is next. So, we agreed upon this formula. It means that we will further closely cooperate with each other. I focused on strengthening the country’s economy, without which we won’t be able to perform the role that the USA has assigned to us,” said David Usupashvili.

Before coming to Georgia, Mike Pence received a letter from 24 influential Georgian NGO figures, in which they called on the Vice President to focus during his visit not only on the occupation problem, but also on the problems in the sphere of freedom of speech, media plurality, independent judiciary and constitutional reforms. Georgian NGOs believe that strengthening of democratic institutions in Georgia largely depends on the partners’ reaction.

“Restriction of Russia’s aggressive revanchist policy has become an important component of the USA’s foreign policy,” said Batu Kutelia, the Vice-President of the Atlantic Council, Georgia’s ex-envoy to the USA. In his words, the Vice President’s visit to Georgia is linked to the legislative act approved by the U.S. Congress.

In his words, amidst tensions caused by Russia’s aggressive policy, ‘Georgia has found itself on the frontline of that confrontation and it’s role is obviously increasing. According to Kutelia, if Georgia makes appropriate use of the USA’s unconditional support, it will get a chance to solve, among others, its territorial integrity problem.

Even those U.S. experts, who rule out any possibility of NATO’s expansion in the near future, admitted to the Voice of America, that the U.S. Vice President’s visit is an important message to Georgia, as a non-member of NATO.

Steven Pifer, a Senior Fellow at the Brookings Institute, the USA’s ex-envoy to Ukraine, noted that this visit underlined the importance of US-Georgia relations.

“Although Georgia is not a member state of NATO, the USA shows serious interest in it. This visit proves that there are strong bilateral ties between Washington and Tbilisi,” said Pifer. In his words, Georgia needs tighter ties with the USA and Europe on its path towards NATO.

“I think that before Georgia joins NATO, the USA and Europe should maintain strong bilateral relations with Georgia. It will be a great support to the country who will be further exposed to certain pressure from Russia,” said the U.S. ex-envoy to Ukraine.