Gyumri: the Russian base that kills

The detailed list of tragic incidents and bloody crimes connected to the Russian military base in Gyumri was published recently by the online resource, Caucasian Knot.

The most recent horrifying incident has just come to an end. August saw Valery Permyakov, Russian serviceman, sentenced to life.

His trial lasted for 18 months. On January 12, 2015 Permyakov murdered six members of the Avetisyan family in Gyumri, including a six-month old baby.

Below is the list of the crimes committed by Russian servicemen in Armenia (compiled by Caucasian Knot).

On April 14, 1999 two Russian border guards, intoxicated and armed with machine guns, opened fire at random at the local market. 2 were killed, 9 were wounded.

The border guards, corporal Alexander Kamenev and private Denis Popov, were disarmed and taken to the police station by market vendors. Their interrogation took several months. Russian and Armenian judicial authorities have agreed that the two were going to be tried in Armenia by a local judge, under the Armenian criminal code.

On December 27, 1999 the Gyumri court sentenced Kamenev and Popov to 15 and 14 years terms of imprisonment, respectively.

Kamenev served his term in Armenia until June, 2011. He was then transferred to Russia to serve the rest of his term there on the request of Russia.

Popov has served only two years of his term in Armenia. He was handed over to Russian authorities on April 18, 2001. Caucasian Knot failed to discover any information on where the two have been serving their terms in Russia.

On June 11, 2003 a group of young men attempted to enter a base. According to witnesses, guard on duty resisted them which resulted in a conflict and shooting.

Two local residents, Artur Pogosyan and Armen Aroyan, were killed. Two others were wounded and taken to the hospital.

After the incident, Major General, Alexander Titov, the base commander, was fired. The report of the Transcaucasian Military District Council included a statement that went, he has allowed serious breaches of discipline and has “neglected his duties.

On April 7, 2013 A. Mkrtchyan, 12 and M. Gevorkyan, 16, died at a Russian tank training ground near the Vagramberd village in the Shirak region. According to the most widespread account of the events, the teenagers were killed by a mine they found at the site when taking sheep to the pasture.

According to the prosecutor`s office, the teenagers had entered the grounds unauthorized at the moment of a firing drill.

Six-month old Serge Avetisyan survived the massacre but later died in the hospital. 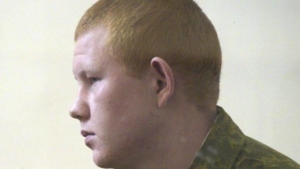 Valery Permyakov, a serviceman who had left the premises of the 102th Russian military base unauthorized earlier that day came under suspicion.

On January 13, Permyakov was stopped by the border guards when trying to cross the Turkish border near the Bayandur village in Western Armenia. He was dressed in civilian clothes, had no documents with him, save 3 cell phones, a flashlight and an equivalent of $13 in the local currency.

Permyakov confessed to the killing of the Avetisyan family that day. He told interrogators that he had planned not to kill them, just to get away. He was unwilling to serve in the army, and killed out of the fear that the Avetisyans might report him to the authorities.

Permyakov was put under arrest for two months in the base guardroom.

On January 15, 2015 mass unrest occurred in Gyumri, involving thousands of people who demanded the Russian serviceman to be freed.

On January 19, Alexander Basrykin, the Russian Interrogation Committee chairman, promised while visiting Armenia that Permyakov would be tried publically in Armenia by the Russian Military Court.

On Februay 3, the Armenian Prosecutor General requested his Russian colleague to hand Permyakov over to the Armenian side.

On August 23, 2016, Permyakov was convicted in Gyumri on charges of murder, assault and robbery and illegal border crossing.