A new plant producing gloves that’s been launched in Choratan, a village abutting on the border with Azerbaijan, is an attempt to support the local residents who’ve lived in the limbo of unresolved conflict, and to curb the soaring rates of emigration from Armenia.

Two years ago, the Tavush-Textile company opened manufacturing workshops in Choratan village – located some 220 km from Yerevan – in addition to neighbouring Artsvaberd and Movses villages, and in the town of Berd. Up to 165 people are currently employed at the Choratan-based factory alone. The company has created a total of 300 jobs.

“We’ve started buying cigarettes and pasta with cash. We couldn’t do that before. Earlier, there used to be a debtors’ lists in shops, from which names were gradually crossed out. It was a deliberate move aimed to prevent youth migration. If that hadn’t been done, there wouldn’t have been anyone left in this area after a while. And now, thank God, we have jobs. My wife, daughter and I have a combined income of AMD 400 000 [USD 840] per month,” said Valery Yeritsyan, a driver at Tavush-Textile, while he loaded yet another batch of gloves. 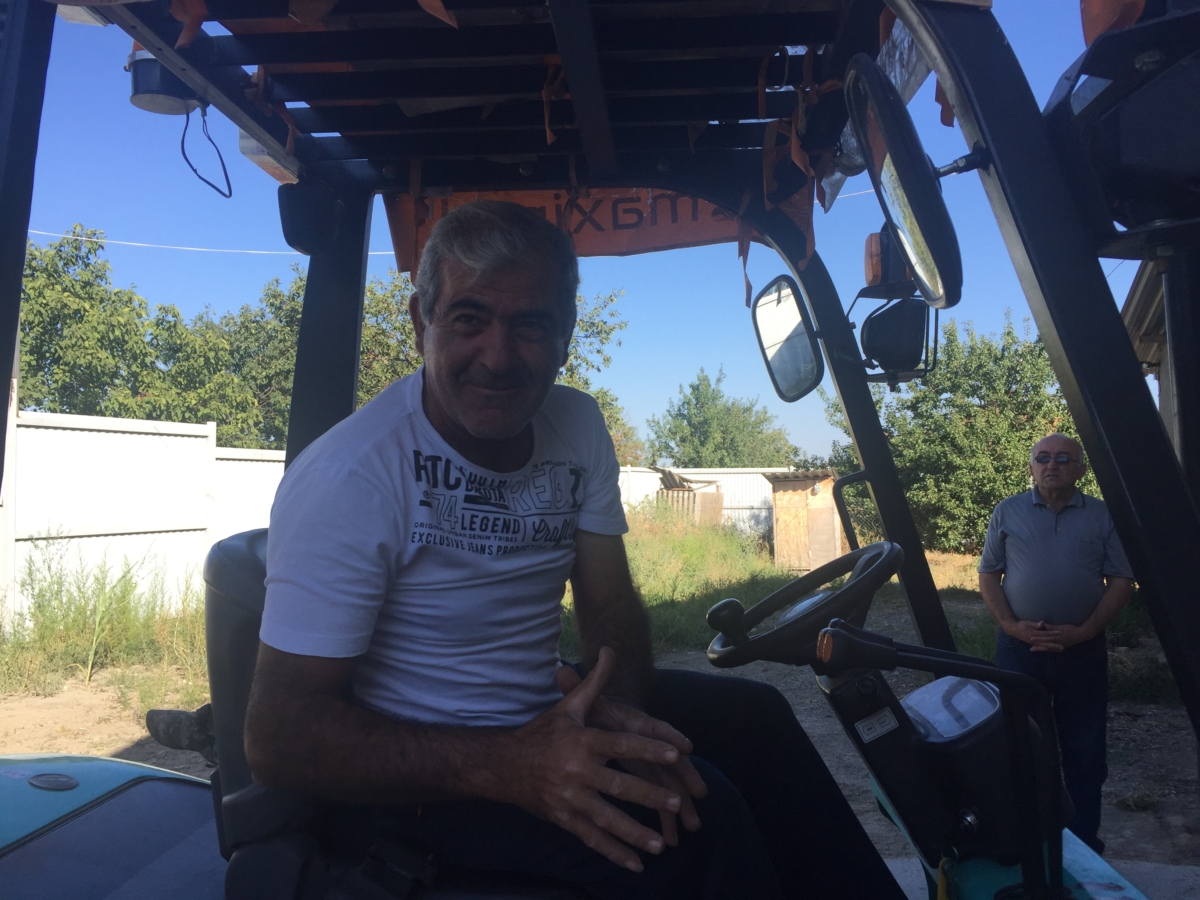 According to Anna Babayan, 50, a native of Choratan village, the factory has changed not only her life, but also that of the entire village.

“Now you can see smiling faces again and people have become calmer. But most importantly, the families that once migrated from the village are returning back. What does a man need? If there is a job, people will stay at home, on their own land,” said an auxiliary worker, who is employed at the Choratan plant.

The Tavush-Textile company was set up by Suren Yeritsyan, a native of Artsvaberd village, Tavush province, who currently lives in Moscow. In 2015, the Armenian government decided to grant a tax exemption to those investing in Armenia’s border areas. So, Suren Yeritsyan, a businessman, established the glove workshops here.

The Choratan factory is located 5-6 kilometers away from Azerbaijani military positions, whereas the workshops in Movses village are within just a 300-400 meter distance from the border.

“The fact that people live here while there are soldiers stationed at their posts is already risky enough. It’s a risky investment, but the investor isn’t concerned,” says Hovsep Ananyan, the chief workshop manager at the Choratan factory. 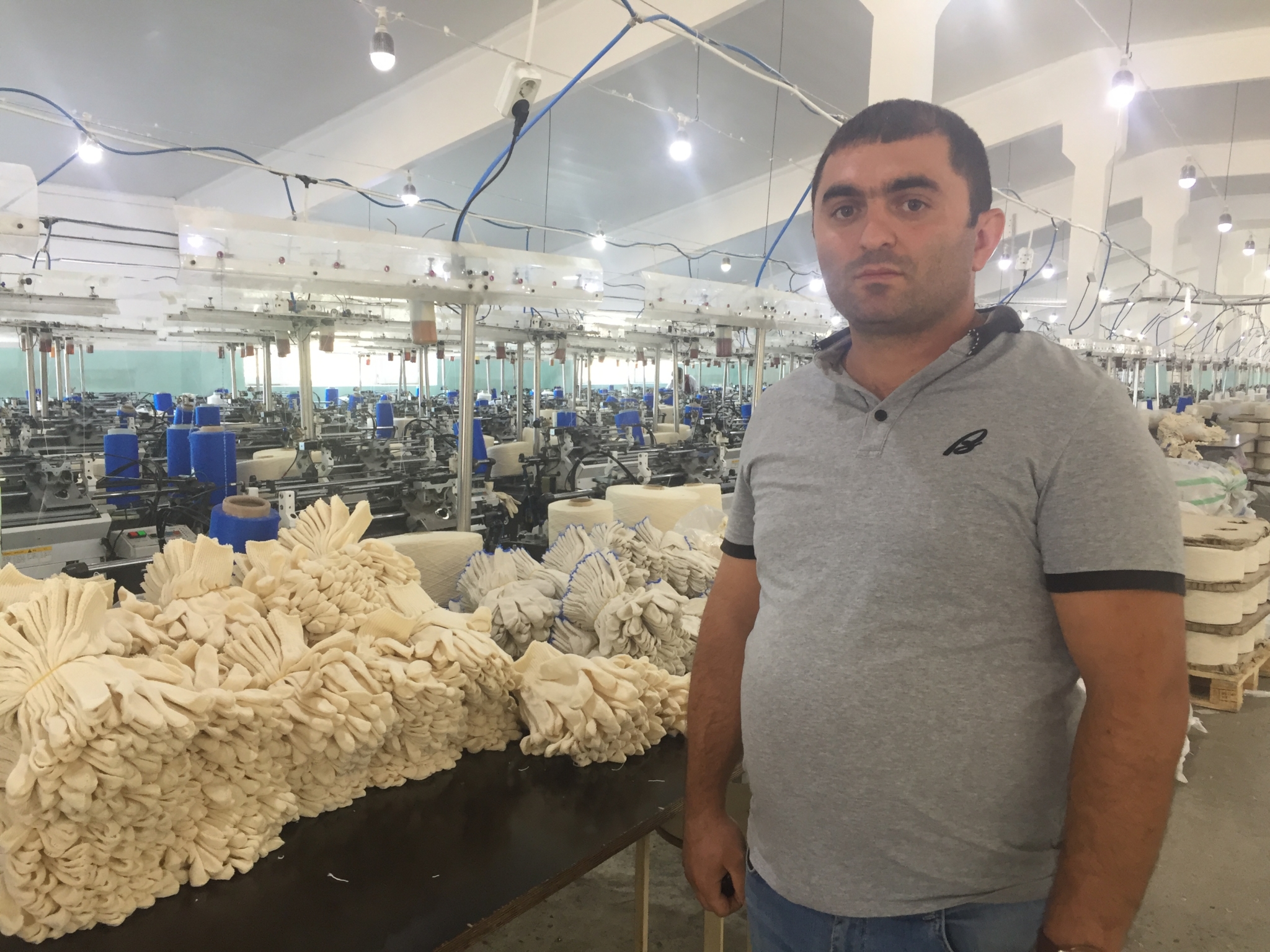 Hidden in the emerald woods, Choratan has sunk into silence. Varuzhan Bagmanyan, the head of the village says that everyone is busy doing their jobs. You can hardly find anyone here who is willing to work but can’t find anything to do:

“Choratan is one of those few villages in Armenia where there are jobs and there is no migration. Moreover, six families have moved to our village over the past year. Four of them have returned from Russia and two families have moved from Byuregavan town, Kotayk province of Armenia.”

Today, there are more than 1 000 residents in this border village. Alongside the factory, people also work in the rural administration, at the school and at the daycare facility. An emergency and rescue service center will be opened here soon, offering jobs to 25 more people.

Protective gloves that are manufactured at the factory are exported to Russia and Ukraine. The daily salary of factory employees ranges from AMD 5 000 to 8 000 depending on the duties allocated to them. People travel from the neighbouring villages to work at the factory. Yet, according to the head of the village, there is a labour shortage at the factory as it still needs another 10 employees.

Armenuhi Hakobyan came to Choratan from Ijevan. She is staying at her aunt’s place. She has already been working at the ‘Tavush-Textile’ factory as an operator for three months. 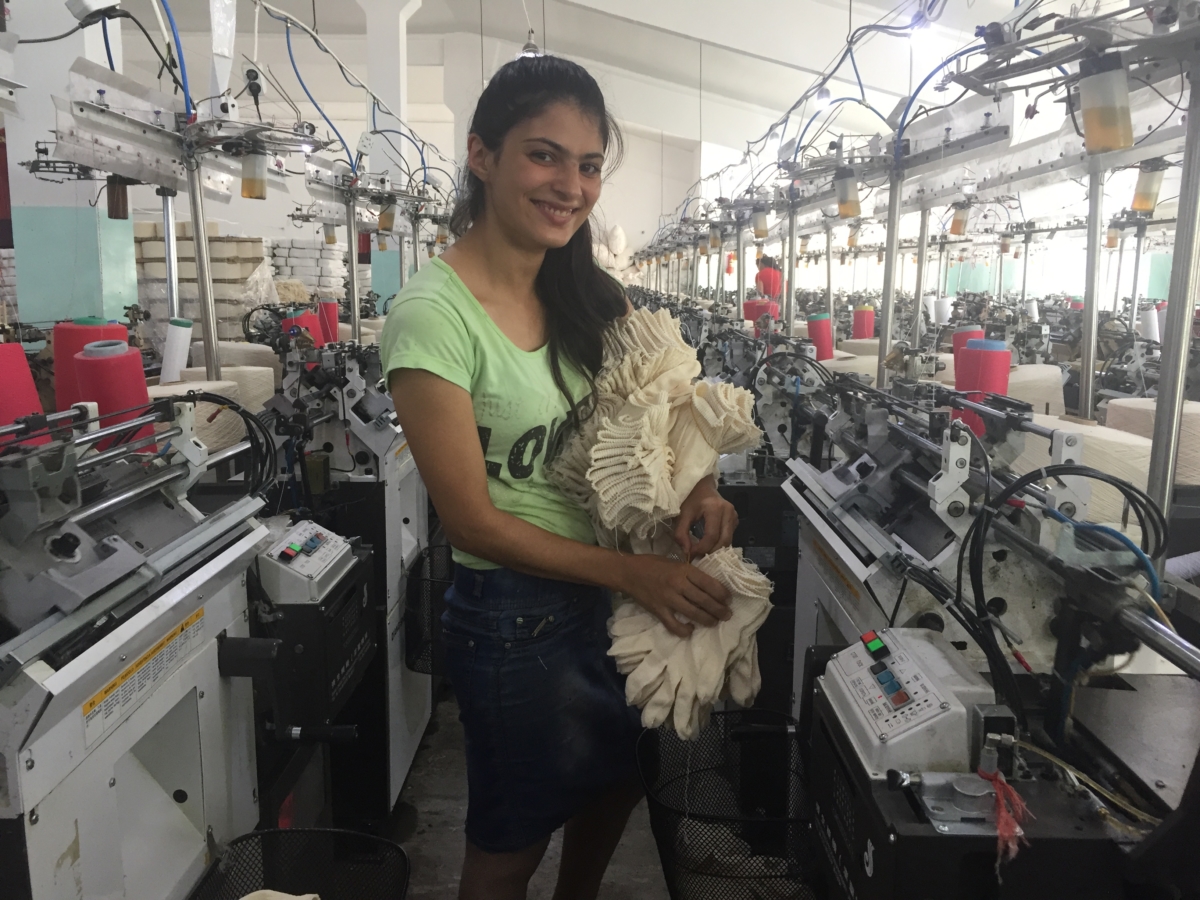 “I collect the gloves, bundle them up and put them into sacks. I also actuate machine operation and load the yarn. I’ve learned all that throughout the working process. Although I live far away from home, my mind is at rest now,” she said.

Mary Virabyan, a native of the neighboring Verin Karmiryakhpyur village, travels to Choratan for work every day:

“There are also people who come here from Yerevan and Gyumri. They don’t have any other choice, do they? It’s better to work far away from home, but in your native country, rather than to leave the country.”

According to the head of the village, about 70 families received social benefits a few years ago, whereas they have now been reduced to 10.

“People’s lives have changed after the factory was put into operation. Now people have money, they can cover their debts and pay off their loans. People feel more confident nowadays. For many years they couldn’t do repairs to their homes, whereas now they can replace their doors and windows. People feel that they are needed and duly appreciated. It’s an example of how a single factory can stop migration in any village and facilitate people’s return,” the head of the village believes. 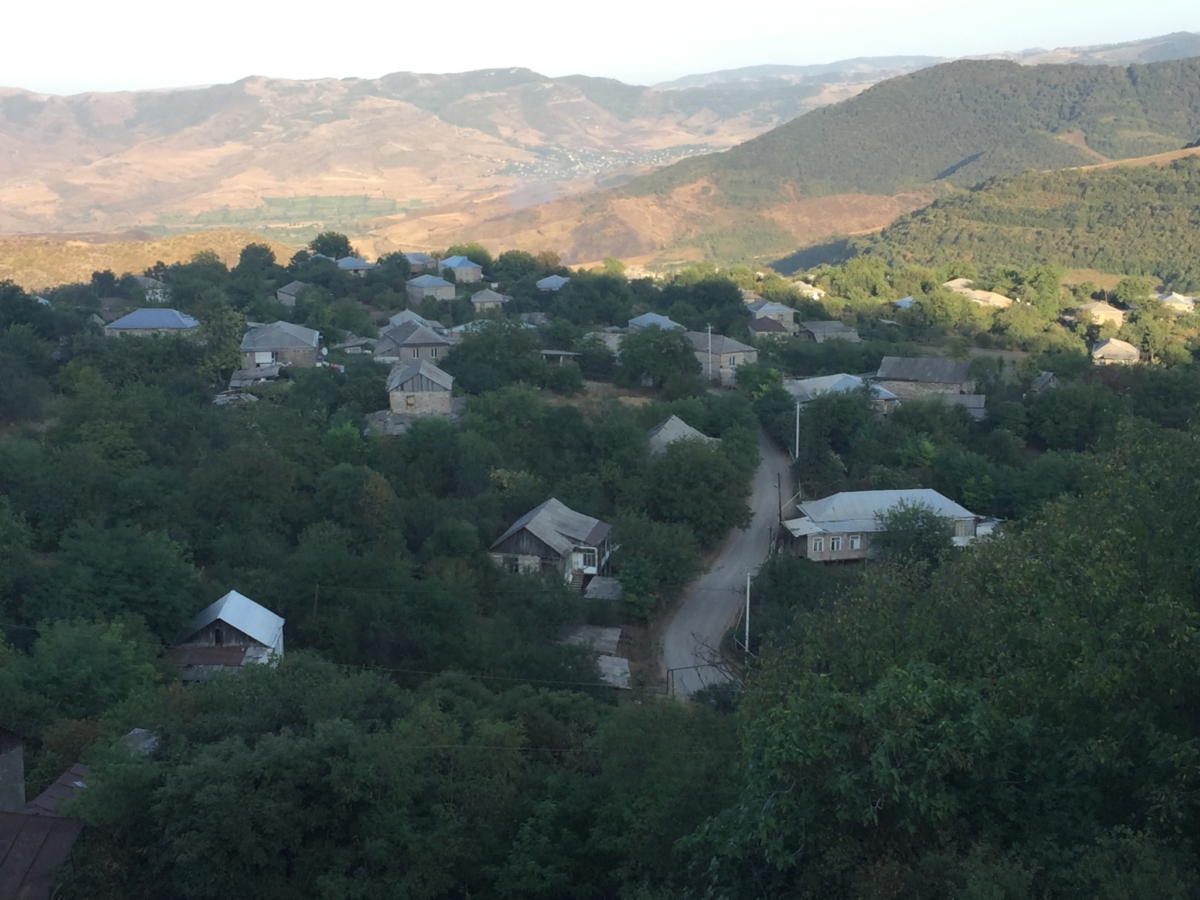 The residents of the border villages reflects peace through their lives and through their presence at the border, whereas gun shots and the presence of the military has become part of their daily lives. “That’s our lot,” they say.

There are several contract servicemen among the residents of Choratan village. Although the glove factory offers them safer work, it hasn’t ensured their return from the border.

Hayk Babayan, 34, a resident of Choratan village, has been serving as a contract-based soldier in the military for 12 years already. He spends half of the month on duty, and the other half at home. His two sons, Hovsep, 5, and Erik, 9, run around their dad who has just returned from a military position.

“It’s not the job for me. I’ve devoted myself to this matter as I’m defending my family, my village. Once I’d left for Russia, but then I returned. It’s my labour of love. I will serve and defend my children and my village as long as I can keep my feet,” says Hayk Babayan. 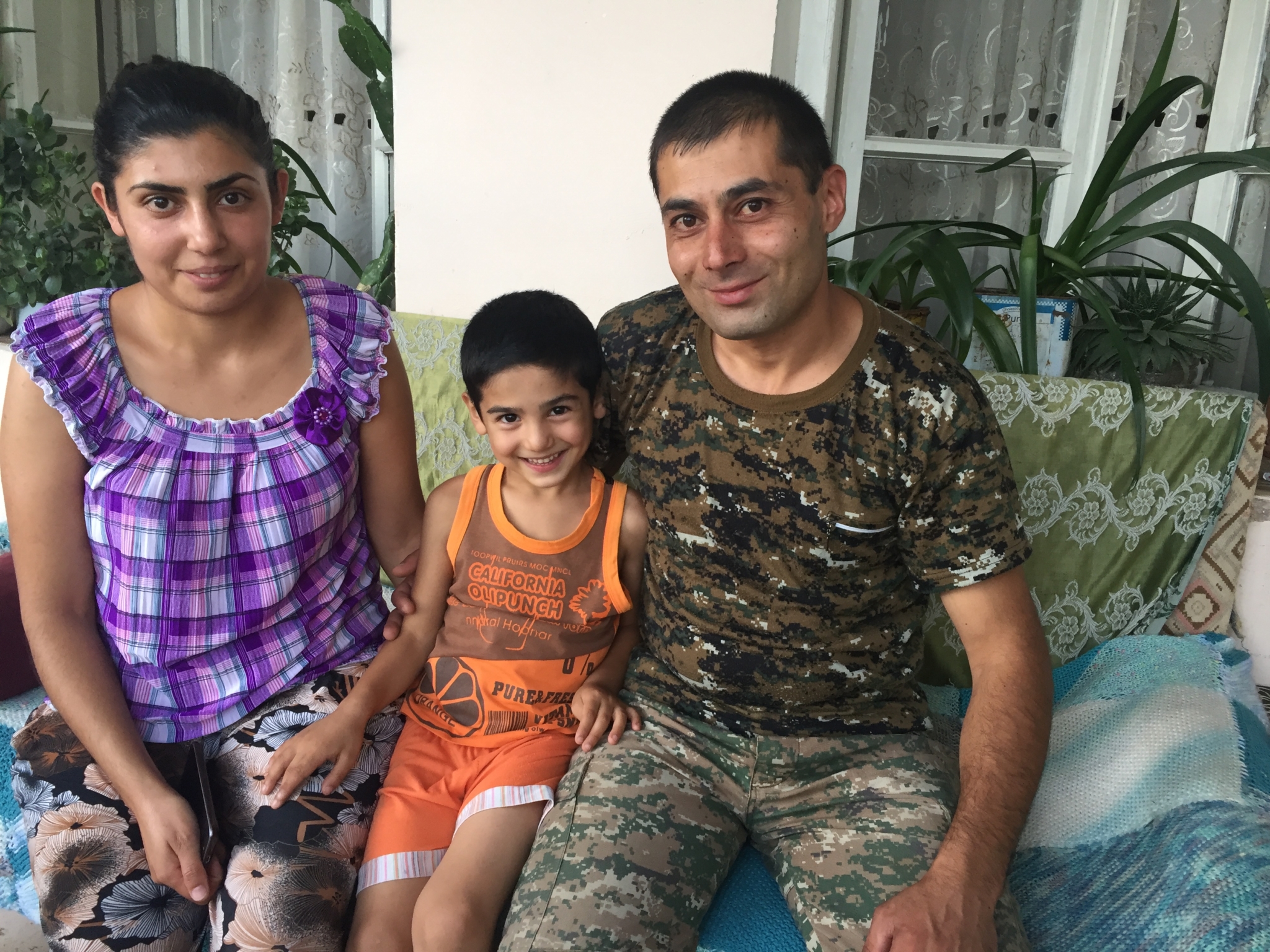 Manushak Babayan, 35, and her family lives in a house on a hilltop. The Armenian-Azerbaijani border is clearly visible from their yard. Like all others residents of Choratan village, Manushak is well-aware of where the Armenian and Azerbaijani positions are.

“Chinari, an Armenian village, can be seen a little further off and there are Azerbaijani villages over there. My husband is serving now and he has signed a three-year contract. This is all very much depressing – it feels as if my life is shortened by half with stress until he calls at dawn. After all, he is exposed to danger every second,” said Manushak, waving her hand towards the border.

She was cooking dinner and her children were beside her. Her mother-in-law, 82-year-old Sirush Kalantaryan also came to join the family. 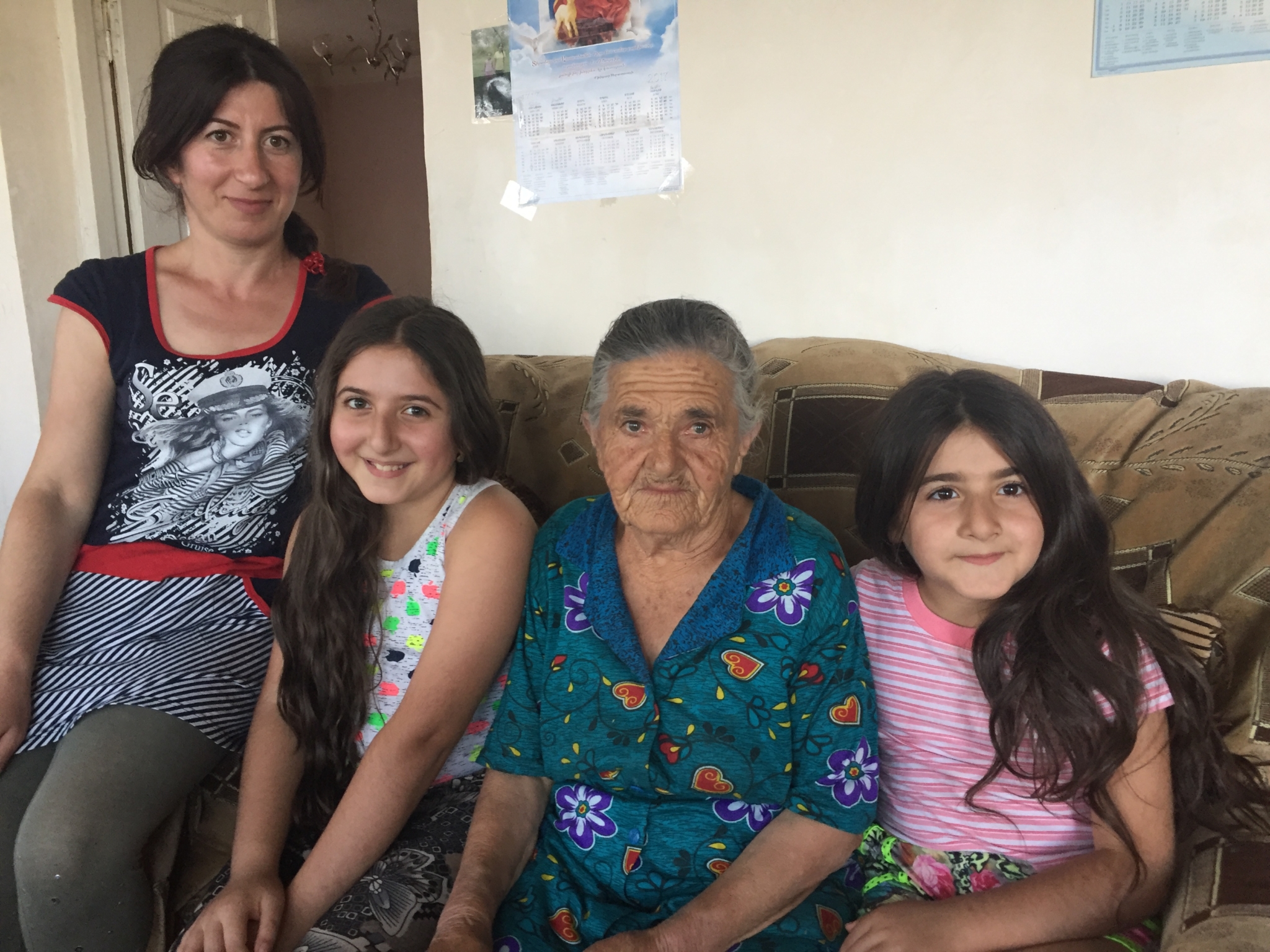 “He doesn’t want to work at the glove factory. I very much wish that he worked there because it’s safe there, but Ara prefers military service,” said the serviceman’s mother.

You can meet more people in the village in the evening when Choratan residents return home from work.

“The most important thing is to have a job. The rest of the problems can be solved. Now, as jobs are available here the main thing is to keep people from leaving. When residents leave, the military will have nothing to defend,” says Varuzhan Bagmanyan, the head of the village.