The tweet was soon erased from her account, but not before it attracted the attention of the public.

Government officials, the opposition and pundits are now discussing whether it was an innocent mistake. 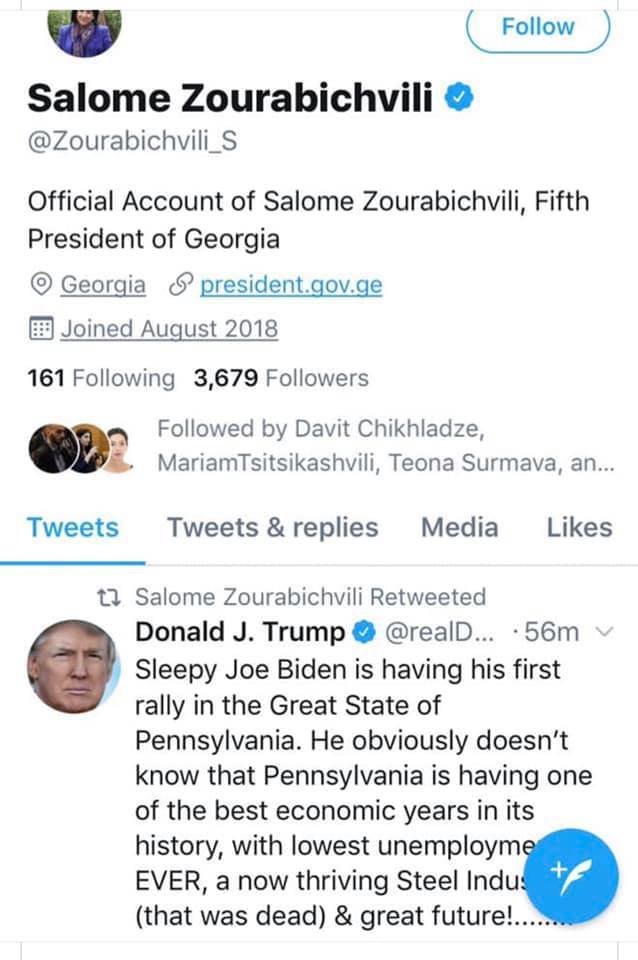 Clarification from the presidential administration

Presidential spokeswoman Khatia Moistsrapishvili says the re-tweet was a technical error made by the social media manager.

However, she said that it was a “primary assessment” and “at this time, analyzing various facts, of course, the likelihood of a cyber-attack cannot be ruled out either”, and that a corresponding inquiry should be made.

The reaction of the authorities

First Vice-Speaker of the Georgian Parliament Tamar Chugoshvili says it is “incomprehensible” as to why there is such excitement concerning the re-tweet.

“This tweet belongs to the current US president. If you have any complaints about him, what he posts on Twitter and how, ask his administration questions. I don’t know – ask the President of Georgia what her motives are,” Chugoshvili told reporters.

European Georgia leader David Bakradze says that Salome Zurabishvili is harming the interests of the country in the international arena with such actions.

“Our main achievement and the main task regarding the United States was to have good relations with both parties, regardless of which party will be represented in the White House or have a majority in Congress. Therefore, I consider any public interference in the internal policy of the United States by Georgian officials harmful, irresponsible and unacceptable,” Bakradze said.

One of the leaders of the opposition United National Movement, Salome Samadashvili, said that the president of Georgia “will have to apologize, including through communication with the US Embassy”.

“These uncoordinated statements harm the state interests of Georgia. What is the way out?! Very simple, you need to block her accounts on Twitter and Facebook, maybe she will stop writing posts. Or, let Mr. Ivanishvili recall her in the same way he put her forward.”

“This is not an ordinary scandal, which may be limited to an explanation of the presidential administration … In the place of the Georgian authorities, I would wonder if Salome Zurabishvili purposely set the stage for a change of power,” political analyst Khatuna Lagazidze told Rustavi-2.

Political analyst Ghia Nodia, in an interview with the same television company, says that if an error occurred due to the fault of the presidential administration, this means that the incompetence of the administration has gone beyond the permissible limits:

“There is a good explanation for the president regarding the online incident. If someone can spread such messages on behalf of the president, then affairs in the presidential administration are very bad.”

The president in parliament

On 30 April, the president of Georgia addressed parliament to take part in a festive ceremony dedicated to the 20th anniversary of Georgia’s accession to the Council of Europe. Neither she nor her parliamentary secretary answered journalists’ questions about Donald Trump’s tweet.

Another embarrassment awaited Salome Zurabishvili in parliament: opposition MPs did not meet her standing.

A leader of European Georgia Sergo Ratiani says Salome Zurabishvili does not have legitimacy in the eyes of the opposition, as she got into the presidential palace by falsifying the elections:

“[In the elections] there were serious bribes and pressure – it was a step back and an erosion of democracy. This has been noted by all international organizations; what happened was an expression of this.”

How did the Georgian government react to Lukashenko's visit to Sukhumi?

"Lukashenko strengthens relations with Abkhazia, but does not want to recognize it" - commentary

How did the Georgian government react to Lukashenko's visit to Sukhumi?

"Lukashenko strengthens relations with Abkhazia, but does not want to recognize it" - commentary