If you want to know where your hazelnuts come from, Wikipedia and Google will quickly give you the answer. The top five hazelnut-producing countries are: Turkey, Italy, the USA, Georgia and Azerbaijan.

Ninety percent of Georgian hazelnuts are grown in the country’s west, in Samegrelo, along the border with Abkhazia.

Up until this day, it is namely with the help of hazelnuts that the region has been able to get along economically, especially after the damage it saw during the conflict of the 1990s.

However, this may soon change. This year in Samegrelo, farmers weren’t able to harvest even half of what they got last year and the prognoses are disappointing.

A guillotine for nuts 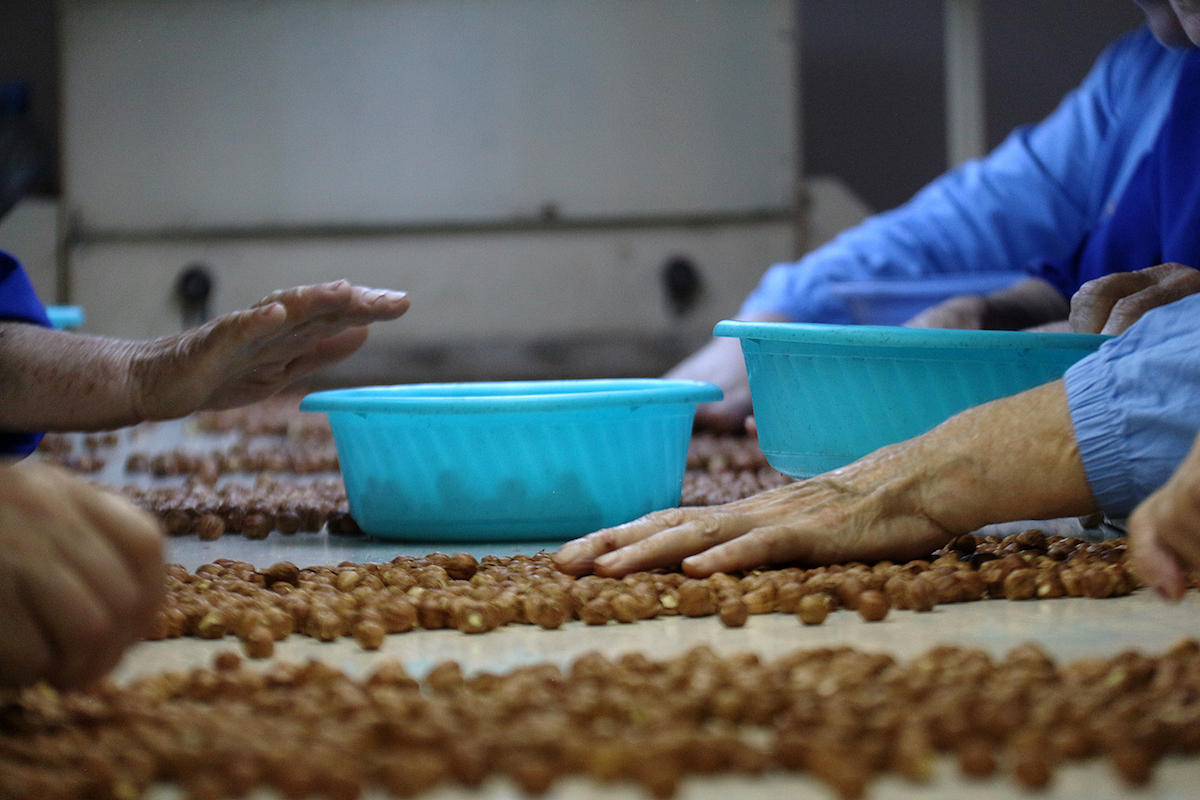 It’s the busiest season right now in Samegrelo. Farmers are harvesting the region’s main crop – hazelnuts. In Zugdidi and surrounding settlements, there are numerous points for hazelnut collection.

A car has stopped by one of them and is carrying several bags. This is the annual harvest and the only source of income for a resident of Kakhati village, Roman Chakhai.

This is done with the help of a procedure that has long since become routine – they take samples of several nuts from every bag. They split about one hundred nuts and the cores are placed in a special device, a so-called guillotine, which then cuts the nuts in two with a flat blade. If 90 percent of the nuts’ cores are ‘healthy’ and ripe, the farmer receives the maximum price established for this year – four lari (1.6 US dollars) per kilogram.

Roman already knows that the nuts from his plantation aren’t of good quality. However, he hoped to sell them for at least a lari a kilogram. He was awaiting the result of the check as one might await a court sentence, while an employee of the reception point checked the nuts. Out of 100 nuts, only nine of their cores were ripe and healthy. This is truly a sentence: the reception point refused to accept the hazelnuts, and the farmer had to take his harvest back.

“I was expecting three tonnes, and I barely harvested three hundred kilograms. I thought I’d sell them for at least a lari, but they didn’t take them. There is no point in taking them to other points – no one will take such nuts,” says Roman.

Temur Gvilava, along with his wife and two children, lives in the seaside village of Anaklia. In earlier years, his harvest and income wasn’t bad – he was able to sell his hazelnuts for about five lari per kilogram (two US dollars and change). The price wasn’t the highest, because the harvest wasn’t of a very good quality. Earlier, Temur says, he was able to sell hazelnuts for about nine to ten lari a kilogram (3.60 – 4 dollars).

When it payed well, many in Samegrelo started up their own farms – they took credit from banks and set up large hazelnut plantations.

That’s what Temur did as well. The bank gave him a 15,000 lari loan (about 6,000 dollars) because he already had a large planation and hazelnuts could be sold for good money back then.

Temur was able to buy an extra half acre next to his house with this money and he expanded his planation to a full acre.

He was supposed to harvest, at minimum, 1.5 tonnes of hazelnuts from this planation. However, this year, he wasn’t able to harvest anything.

“I have to pay every harvester 25 lari a day (about 10 dollars). We examined the nuts, and it turns out that the harvest won’t even cover these expenses. For that reason we didn’t even harvest them,” he says, holding up a hazelnut.

One can see at first glance that the nuts have rotted. Some nuts look healthy from the outside, however if you examine the core, one can see brown stains on the inside.

Temur is now thinking about how he’ll be able to pay back his bank loan.

Farmers with large plantations have also taken a hit this year in the region. Mariam Kodua, a 24-year-old from the village of Darcheli, has a 15-acre hazelnut plantation.

“Last year we harvested 25 tonnes of hazelnuts on this piece of land. This year, only seven. It will be good if 35 percent of the hazelnuts will turn out okay,” says Mariam.

What is happening to the hazelnuts?

The brown marmorated stink bug, or stink bug for short, has completely destroyed the harvest in Samegrelo.

The halyomorpha halys, as it is known by its scientific name, feeds on plants. In Georgia, it appeared for the first time in 2015, and last year it hit the harvest hard.

According to information from the National Food Agency, the damage done last year by this bug was estimated at 60 million lari or about 24 million dollars.

The stink bug is harmful not only to hazelnuts, but for other crops as well, such as corn.

Last year the Georgian government created a strategic plan to fight against the pest. To put the plan together, a biologist from the University of Pennsylvania was invited, professor Greg Kravchuk.

About 7.5 million lari (about 3 million dollars) was allocated for the project, and another 8 million in aide was received from the USA.

On 12 June, hazelnut plantations were given a chemical treatment against the pests. In total, an area spanning 351 villages in the regions of Samegrelo, Guria and Adjara, 53,000 hectares of land was treated, including local plots of land of residents and corn fields.

However, this was all in vain; the residents of Samegrelo say that apart from the hazelnut harvest, the pest has also devastated corn fields.

This is a Facebook post of a local resident, Kakhaber Adamia. He wrote that stink bugs are destroying everything. This summer, there were many similar posts on social media.

Pessimism is rife at the National Food Agency. The leader of the Department of Phytosanitary Inspection and Certification, Zurab Lipartia, told JAMnews that the USA has been spending an enormous amount of resources for the past 16 years in the fight against this pest, but so far the efforts have remained largely without results.

According to him, it will never be possible to fully eradicate the pest.

“But if the population supports us and follows our recommendations, we can control its reproduction and deal with the problem,” says Lipartia.

However, local residents say that the reason for the damage is the ineffective actions of the authorities. In particular, they say, the chemical treatment began too late.

David Khurtsilava from the village of Ingiri, who has almost completely lost his harvest not only of hazelnuts but of corn as well, says that if the authorities had started earlier in May, the damage would not have been so extensive.

The National Food Agency says it wasn’t possible to start the treatment earlier this year because of rainfall. Moreover, because of the precipitation, 17 kinds of different fungal infections hit plantations this year.

“We started the chemical treatment on 12 June. This was when the stink bugs moved onto the plantations. This wasn’t late. The damage done by the pest was no more than 10 percent of the overall damage. The harvest was hurt much more by fungal and bacterial infections. The harvest is healthy in places where people fought against these things,” says Zurab Lipartia.

Locals say that they were not informed of the proper methods for dealing with the fungal infections, nor with the pest.

“There are practically no work places in Samegrelo. Hazelnuts are our only source of income. We never sell it all at once, we leave some for a ‘rainy day’. In winter, when we need it, we sell 100-200 kilograms and we buy medicines or other things for the family. Now we have nothing. Everything that the stink bug got into has been spoiled. We have no more corn to eat, no money nor food for products. Now, the stink bug has moved onto the kiwis. How are we supposed to treat the plantations next year if this winter we are doomed to starve,” says David Mirtskhulava.

What was the damage?

There is no definite information on the extent of the damage yet. According to the Minister of Agriculture of Georgia Levan Davitashvili, the hazelnut harvest may be 20-30 percent less than it was last year.

Residents of Samegrelo are asking for compensation, but the government says that there are no funds for that in the state budget.

Farmer Mariam Kodua says that if the government does not find the money for the farmers, then next year one can expect an even worse situation, as the small-time farmers that have been left with nothing will not be able to fight against fungal infections and pests.

“It takes more and more money and resources every year to take care of the hazelnut plantations,” she says.

Last year, Mariam spent 5,000 lari to treat her lands, or about 2,000 dollars. This year, she spent 12,000 lari. She says that, taking into account the extent of the problem, maybe even 15,000 lari might not be able to take care of the problem, as a result of which they may have to consider growing something other than hazelnuts, which have become one of Georgia’s staple exports in recent years.

Georgia is one of the top five exporters of hazelnuts to the EU, just after Turkey and Italy:

Hazelnut farming in Georgia began during the period of independence after the collapse of the USSR without subsidies of any kind and without any help from the state.

Now, hazelnuts are grown on about 60,000 acres of land in Georgia. The majority of the plantations are found in Western Georgia – in the regions of Samegrelo and Guria.

Georgian hazelnuts are also exported to Kazakhstan, Iraq, Ukraine and China, but the largest export market is the EU.

Mariam Kodua says that in addition to plantations, she also has a factory that processes hazelnuts, which prepares about 100 tonnes of produce for export to Italy, Germany, Poland and the Czech Republic.

“This year, we bought five tonnes of hazelnuts from the local population. We probably won’t buy anymore. The harvest has been scarce, and what has been harvested isn’t of a very good quality,” says Mariam.

And the EU won’t accept bad hazelnuts. For that reason they need special care. For example, if hazelnuts aren’t chemically treated in time, it’s already too late, because then traces of the pesticide remain in the core of the nut and they are no longer eligible for export, explains Mariam.

The company Euronuts-2009 is one of the largest processing enterprises and it often returns nuts back to farmers. Currently, the factory has accepted only around 100 tonnes, while last year same time it processed about 500 tonnes.

A representative of Euronuts, Nana Khasia, says that the demand for Georgian hazelnuts is big, and that this year the company gained a new partner in Germany. However, now it would appear the entire business is under threat.