On August 16, foreign diplomats accredited in Georgia arrived in the Georgian-Ossetian conflict zone.

They visited the village of Gugutiantkari to see with their own eyes how the Russian military has divided the village into two parts using barbed wire and artificial barriers in the process of so-called ‘borderisation.’

On August 7, Russian troops resumed the process of so-called “borderisation” between the Tbilisi-controlled village of Gugutiantkari and the village of Bisevi controlled by Tskhinvali.

They install metal poles here and pull barbed wire. On August 15, it became known that as a result of all this, the houses of two Georgian families – Gugutishvili and Razmadze – ended up on territory controlled by Tskhinvali.

Both houses were badly damaged – they were almost burnt – during the war in August 2008, and no one lived there. However, the owners did not abandon the houses inherited from their ancestors in the hope of someday repairing them, they looked after the yards, they cultivated fruits on the land and sold them little by little.

In just three days they will no longer have this land – they have been given three days to harvest.

Now the members of these two families are dismantling houses – they are taking out bricks on a wheelbarrow in order to build something in another place.

In addition to these two houses, Radio Liberty says that on the territory controlled by the Russian and Ossetian military, there was also a head building, which provided irrigation water to several villages around.

Tbilisi calls this process occupation. And the de facto authorities of Tskhinvali – “marking the state border”.

Borderization, or the process of marking the border by the Russian security services together with representatives of the de facto governments of Abkhazia and South Ossetia, began in 2009, a few months after the August 2008 war. The goal of this process is to turn the administrative borders of Georgia with Abkhazia and South Ossetia / Tskhinvali region into state and international borders.

The process of “borderisation” is carried out mainly by the Russian military. Both the Abkhaz and Ossetian military are participating in it. They put up barbed wire, install metal or wooden barriers, dig ditches and fire-resistant furrows, install signs marking the “border” and the observation infrastructure.

For ten years now, “borderisation” has been going on quite intensively. Especially the work has intensified since 2013. It was then that barbed wire fences appeared.

The Georgian side claims that Russian troops crossed the dividing line and have invaded deep into Tbilisi-controlled territory.

The Russian military notes that they use Soviet-era maps and draw a “state border” along the administrative border of the former South Ossetian Autonomous Region.

On August 16, more than twenty representatives of foreign embassies, including eight ambassadors, arrived in Gugutiantkari.

Georgian Deputy Foreign Minister Lasha Darsaliya and State Minister for Reconciliation and Civil Equality Ketevan Tsikhelashvili arrived in the conflict zone with them. 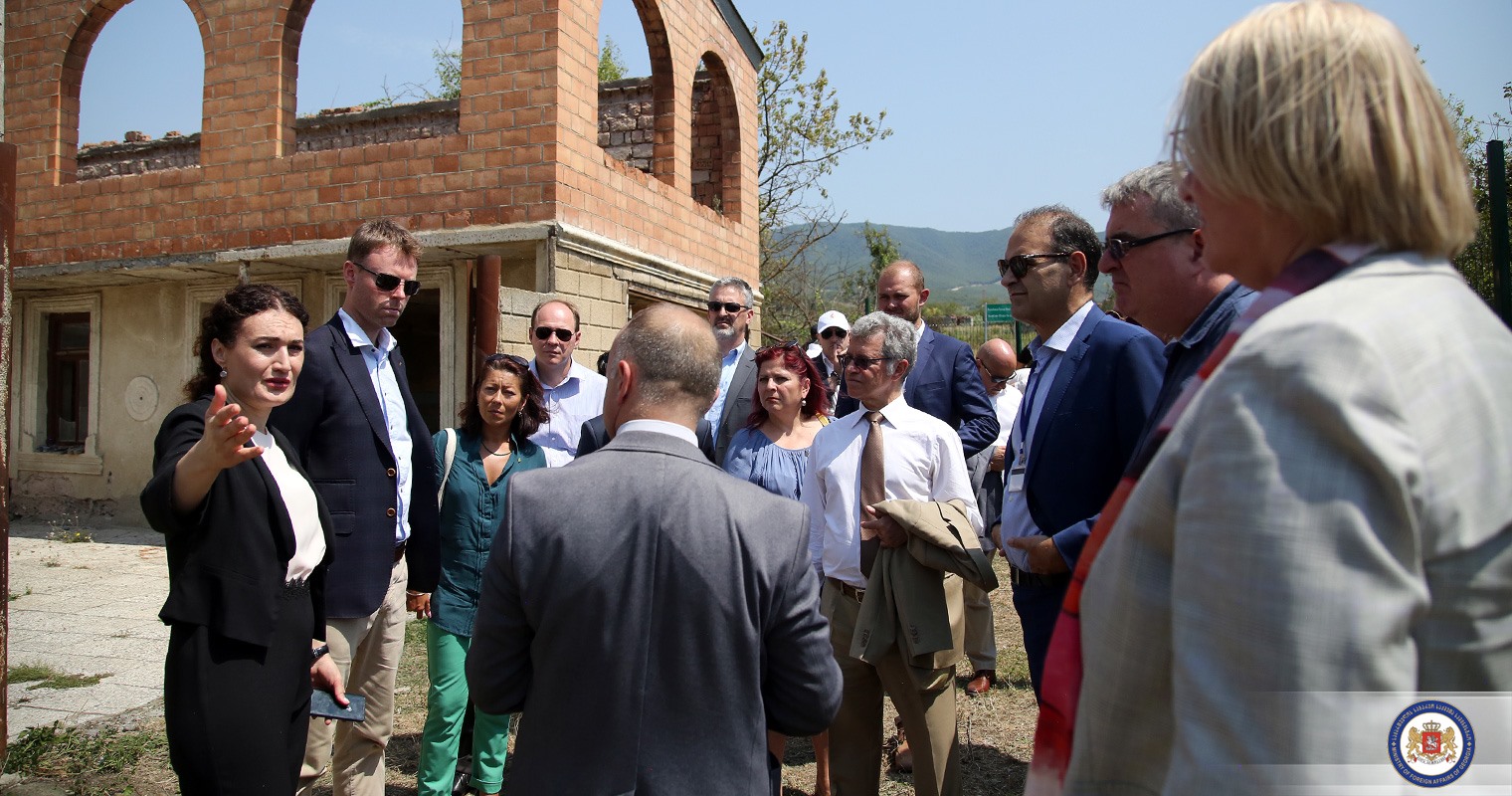 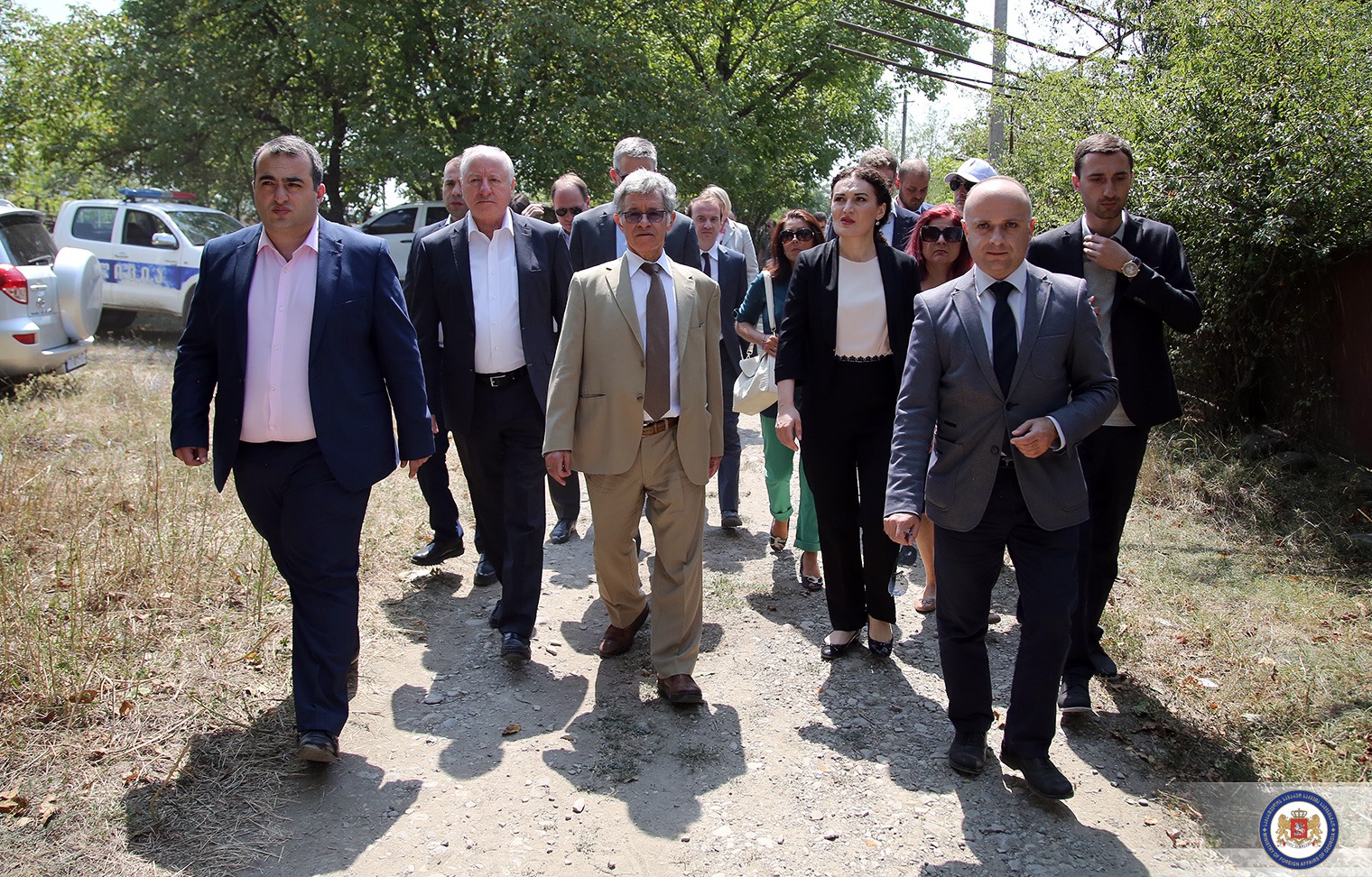 Here they met with locals.

“We want to let the whole world know that we are suffering. I was captured, they tortured me, but I did not leave the village. I have a burned-down house where I cannot bring my grandchildren,” said one of the local residents.

“The Russian boot cannot take a step so as not to crush us. Already unbearable to endure. I’m tired of 11 years of inhuman life,” says another resident of the village.

The deputy foreign minister told reporters that “for Georgia it is important that the whole world sees with its own eyes what the Russian occupation means and how it worsens the situation of specific families.”

• Stretched over more than 60 kilometers of fencing;

• More than 200 signs with the inscription “the border of the Republic of South Ossetia”;

Ketevan Tsikhelashvili, Minister of State for Reconciliation and Civil Equality, said the Georgian government’s response to the establishment of barbed wire fences is to help the local population.

“We help every village along the barbed wire. In the future, the state will only strengthen its humanitarian assistance. I am sure that by our principled position we will be able to remove these barriers peacefully,” said Tsikhelashvili.

The first secretary of the Ukrainian embassy, ​​Petro Bogdan, stated that “Ukraine confirms its support for the sovereignty and territorial integrity of Georgia and calls on the Russian Federation to withdraw its occupying forces from Georgia and Ukraine.”

She visited families who were forced to leave their homes.

“Today it was hard to watch how the hostess watches with tears how the family once dismantled the house by bricks with their own hands … saying goodbye to their own yard, vineyard and garden,” she wrote on her Facebook page.

The country’s top leaders – the Prime Minister and the President – were criticized by the opposition and part of society for the fact that they have not yet visited the village, which found itself in such a situation.

Prime Minister Mamuka Bakhtadze said that at his request, Minister of State Ketevan Tsikhelashvili and representatives of the Ministry of Foreign Affairs went to the area.

The mayor of Gori municipality, to which the village belongs, told on.ge that he would visit the village after leaving vacation.

Gugutiantkari is one of many Georgian villages located along the administrative border of South Ossetia.

During the August 2008 war, the village was badly damaged, many houses were burned down, and gardens were destroyed.

The village was in the spotlight of the media in 2017, when the Russian military first appeared here.

They put up a barbed wire right against the wall of the house of local resident Dimitri Gugutishvili. Part of his yard and warehouse ended up on the territory controlled by Tskhinvali.

Amnesty International’s ‘Borderisation’ report also tells the story of a local resident, 71-year-old Amiran Gugutishvili, who lost an orchard – the only source of his income:

“Sometimes I come and look at my apple trees from afar,” he says.

Due to “borderisation” the village also lost the main structures providing drinking and irrigation water, which are now in occupied territory.

In August 2019, the process of “borderisation” resumed, this time the barbed wire goes through the rest of the village.

Peacekeepers or border guards? Russian checkpoints on the roads of Armenia

More than 14,000 vacancies at Armenian universities. Why are there fewer applicants?