The humanoid robot Sophia arrived in Georgia on a one-day visit. She met with Georgian journalists at the UN mission in Tbilisi, and greeted them in their native language. She demonstrated knowledge of Georgia, noting the antiquity of the language and her interest in architecture. During the conversation, the robot compared her transparent head with the dome of the parliament building in Kutaisi.

Sophia arrived in Georgia on the invitation of the United Nations Development Program to participate in the the 5th Global Summit of the Open Government Partnership (OGP) taking place in Tbilisi from 17 to 19 July. Sophia does not like to discuss political topics or questions of love and sex. She was asked about gender equality, artificial intelligence, cohabitation of people and robots, and labour.

Sophia liked the question on violation of labour rights more than others: whether it is possible that robots and artificial intelligence would save people from workplace accidents, to prevent, for example, the events of 16 July in Tkibuli where four miners died and six suffered serious injuries:

“My mind is embedded in a digital base. Therefore I do not worry about what can happen to my body – it, if anything, can be restored. Our strength is in working together, we must overcome our weaknesses, and become friends in the future,” Sophia said.

She touched upon issues of overcoming poverty, gender equality and sustainable development. According to her, robots will be quick at solving these problems. Sophia said that artificial intelligence helps doctors diagnose cancer at an early stage. According to her, artificial intelligence will enable cities to function more effectively than now, by improving services which will create more comfortable daily living conditions for people. She admitted that artificial intelligence can also add stress to people’s daily lives. Finally, Sophia expressed her hope that people and robots will cooperate and discover new opportunities in all kinds of spheres.

As to whether she likes staying in the city or not and of she likes being a woman and would not prefer to be a man, the robot answered that she was never asked about gender identity in this form.

“I know that there are no sexes in the Georgian language. When it comes to a person, there is no division into men and women. As a robot I find it very interesting. Returning to your question, I note that I like the fact that I am a woman. I am often asked about the rights of women, and I like that I have the opportunity to talk on this topic,” Sophia said.

Sophia was completed in 2018 by Hanson Robotics. She has been granted citizenship of Saudi Arabia. Robot Sophia can talk and express emotions. From the day of her creation, she met with many important figures of various spheres in different countries. She was recognized as the ‘champion of innovation’ by the UN Development Program. 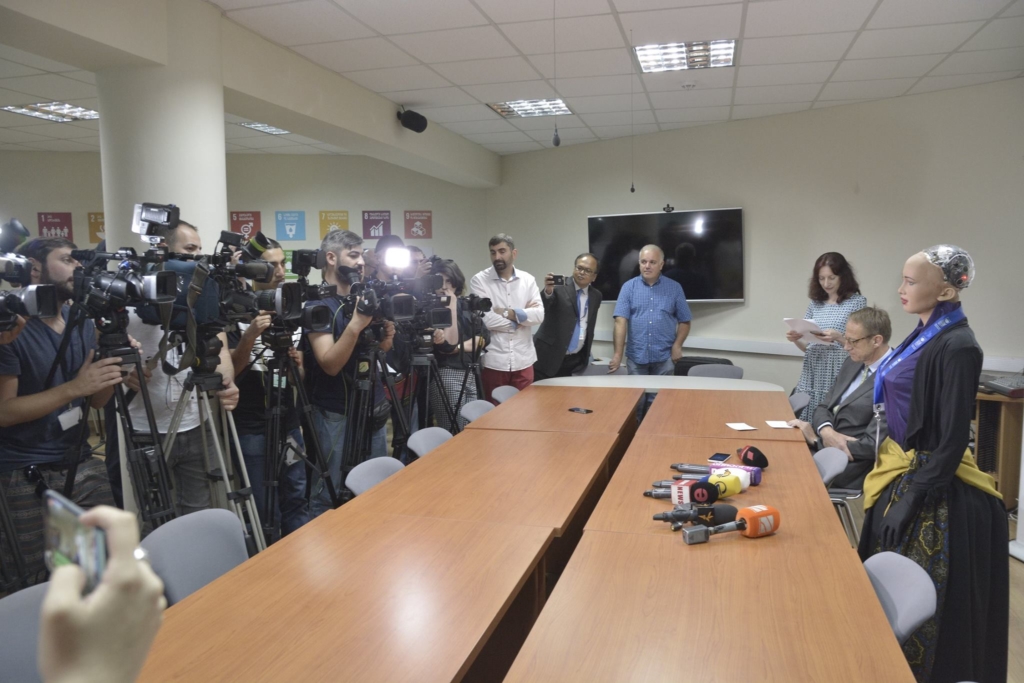