Five stories of Armenia’s unsung heroes of the Velvet Revolution

Protest movements began in Armenia on 13 April against the then-authorities.

It was initiated by opposition MP Nikol Pashinyan. And though few believed that the public would come out and join the fight of the opposition, thousands of residents did indeed join. They closed the streets everyday, sometimes even national roads, and shut down the airport for a day. As a result, the mass, peaceful protests achieved their goal. On 23 April, then PM and leader of the former ruling Republican Party Serzh Sargsyan resigned. On 8 May, the parliament elected a new prime minister, Nikol Pashinyan. This article is about those people who supported him and actively participated in Armenia’s ‘violet revolution’.

Immediately after PM Nikol Pashinyan’s election, she ran to Republic Square. Pashinyan was awaited by thousands of protestors. But on Abovyan street the PM’s car got caught up in traffic. Ani, who had recently just came out of the hospital, was in one of the cars stuck in traffic along with him.

Ani Vardanyan is 18 years old and is a member of the ESU Restart student initiative. She had never participated in political protests. When the movement against the authorities began, she did not intend to join them. But everything changed when they tried to prevent her from making her way there.

“On 13 April we were at our lectures when we heard that the administration of the university had closed the doors of the building and were not letting anybody out. On that day I understood that if I don’t go out onto the street right now, these days will be closed to me forever. We had never participated in any political demonstrations. The aim of our initiative was and remains a quality education system, but the system itself forced us out onto the streets through its actions.”

The student movement quickly organized itself and brought tens of thousands of students out onto the streets. The youth became the main symbol of the revolution.

On 16 April, Ani and her friends were on Baghramyan street by the parliament building. Climbing on her friend’s shoulders, she saw the police blockade approach and behind it, the many thousands who had gotten together for the demonstration. 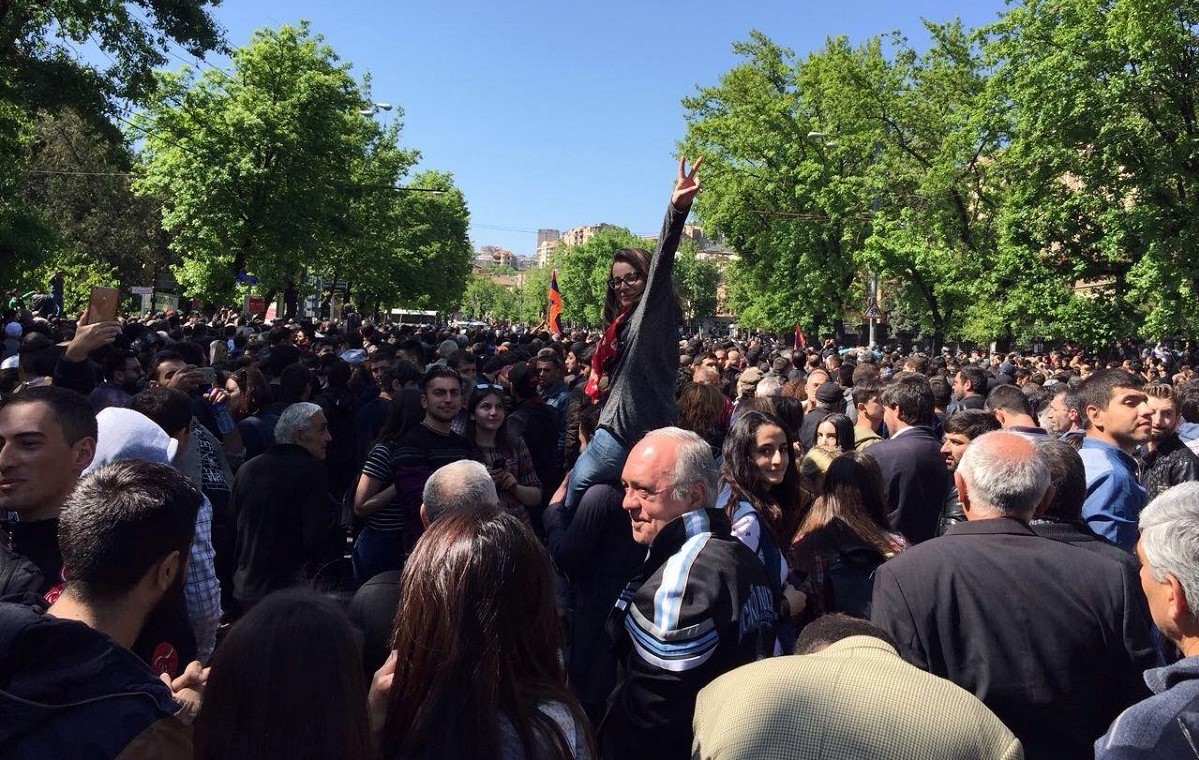 In just a few minutes, the police began their operation. They exploded a sound grenade just underneath Ani’s feet.

“My leg was seriously injured, and I was immediately taken to hospital. I couldn’t walk, the pain was too much. The doctor told me they might need to operate.

“I followed the live feed of the National Assembly from the hospital on 8 May, and when I understood that Pashinyan would be elected, I ran out of the hospital, got into a taxi and wanted to get to the square. I wanted to see this victory, but I couldn’t get there. I celebrated the victory with the taxi driver and my friend in the car while we were stuck in traffic.”

The final victory, Ani says, will be the creation of a country where people will actually want to live and stay:

“I want the new government – whoever it may be – to clearly understand: if it will repeat the mistakes of the former government, it can expect the same fate. We are already a ready and strong opposition with clear demands of the authorities.”

The new Prime Minister was already at the square. For the first time in the past month of protests you could hear the national anthem of Armenia.

Edik was there too among the thousands that had gathered on the square. 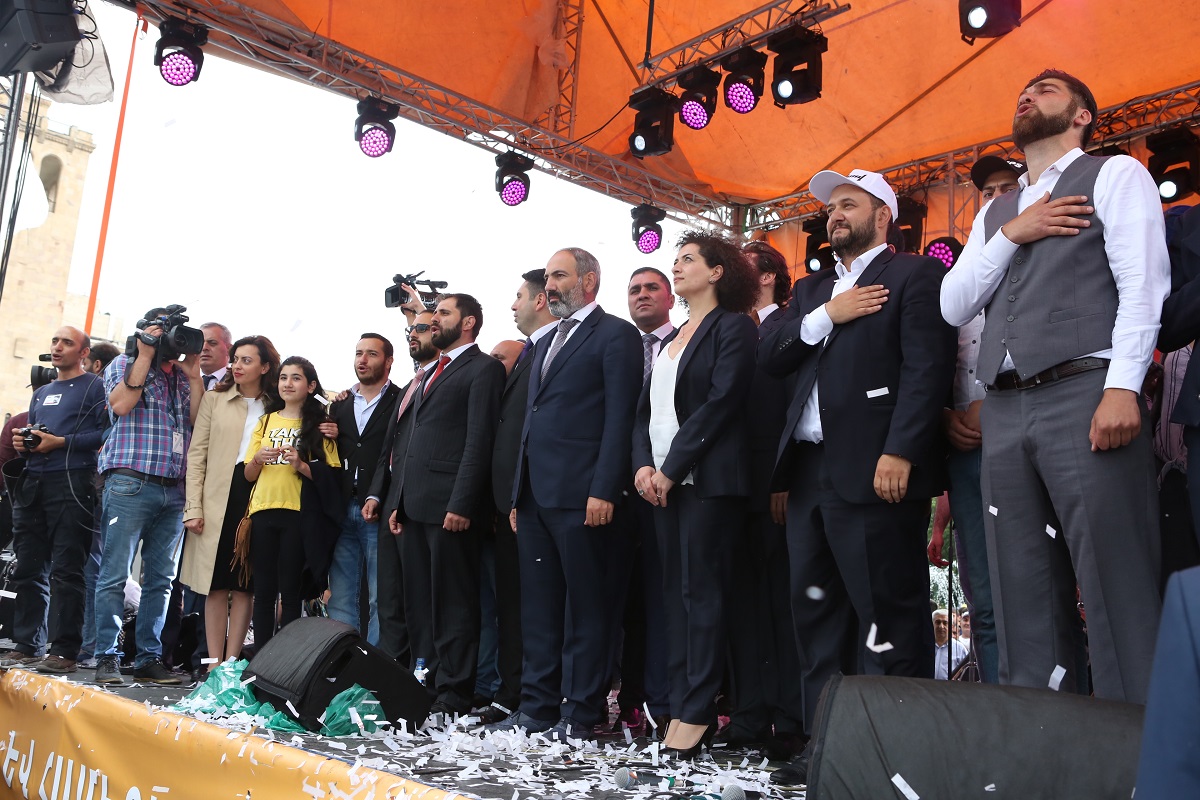 He wasn’t hard to spot. He had a hat with a feather sticking out of it. Edik Poghosyan came to Armenia in 2007 from Iran. He is an artist but in Iran he was well-known for his translations of modern Iranian literature.

Edik says that when the anthem began, he understood that coming to his homeland was the right decision.

“I take the word revolution with a grain of salt, because I saw the Islamic revolution of Iran. This is a completely different animal. I am happy for these changes, they were much needed,” he says.

Edik believes that the one real ‘revolutionary’ day was 22 April when the protest movement leader Nikol Pashinyan was detained. On that day, a revolution took place in people’s consciousness.

“During one of the marches, someone was giving out sunflower seeds. At first I thought it was an unimportant moment, but it was clear that the many-thousands strong demonstrations could interact and have one aim.

“During the demonstration, the music of Komitas was playing, and music from the pop-singer Tata, and sunflower seeds and kabab and chocolates. A real revolution will take place if this cultural variety will intersect and learn to co-exist. When people learn to greet one another and not throw garbage on the street and cross the street at the right place…”

Edik doesn’t expect any major political miracles to happen now after the protests, but he demands that the new government keep to its word.

At the demonstrations there was a sewing machine in front of the main platform. A woman in a white t-shirt was sewing an enormous Armenian flag. 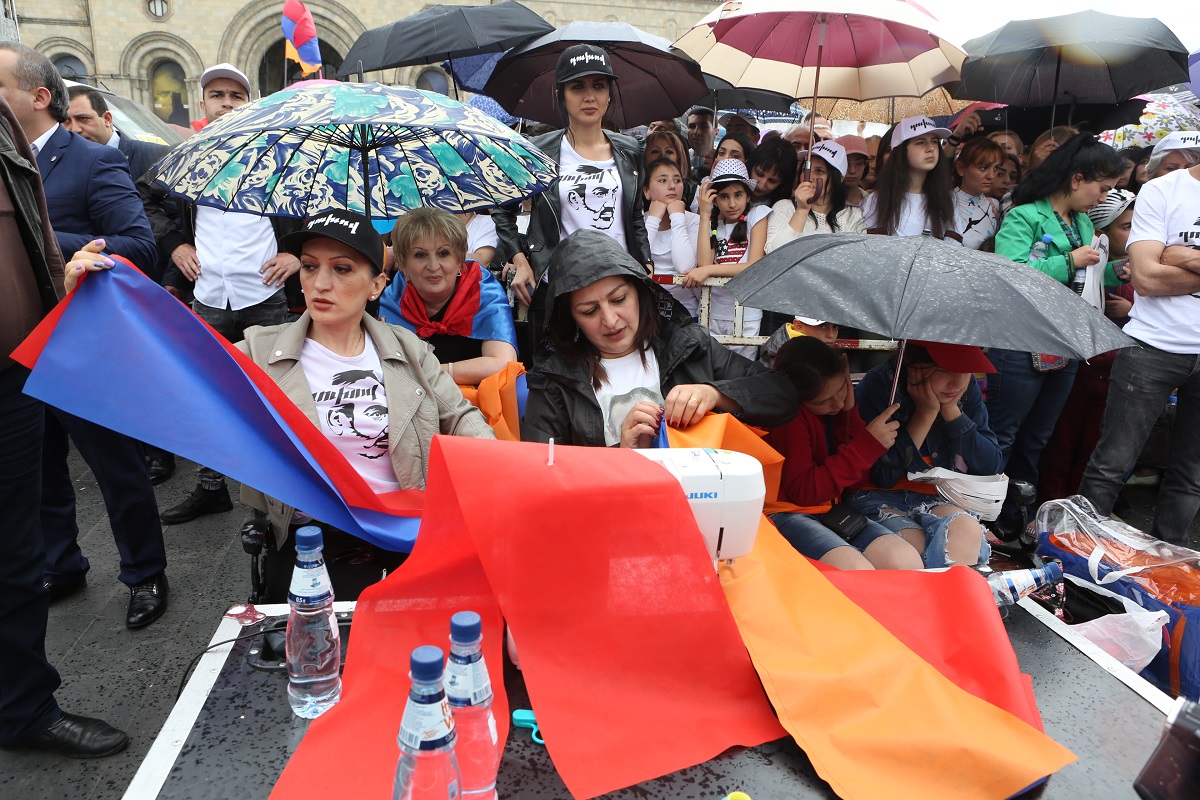 Grandma Leyla stood looking over her shoulder watching her work from one of the front rows.

She was always present at the demonstrations, several hours before even, in order to get a front row seat and observe the events. She is hard of hearing and from this position she can read the lips of those speaking.

The first photographs of Grandma Leyla appeared on social media on 1 May. Everybody noticed the woman who stood for 12 hours on Republic Square. The joyous and energetic woman had seen much in her life: the years of repression and war. She had been participating in demonstrations since 2008.

“On 1 March I was at the demonstration and I saw everything. On that day a tank even tried to run me over, but I wasn’t afraid, I stood my ground. I saw Nikol back then. There were many people but I knew that he would be the leader,” she says.

After the presidential elections on 19 February, the Central Election Commission claimed that Serzh Sargsyan had won. Supporters of another candidate, Levon Ter-Petrosyan, did not believe the results and thought them to be falsified. Many believed Ter-Petrosyan had won. From 20 February mass protests began in the country. On 1 March 2008, 10 people died while the protests were being dispersed.

A hope for life in a fair and just country, Leyla says, is the right of the youth.

Leyla wants to live to one hundred years old in the new Armenia.

“I want to see with my own eyes that my grand-children and great grandchildren live in a good, peaceful Armenia. It will be difficult but Nikol will take us towards a better future.”

Veterans of the Karabakh war, in uniform, were meeting with the new Prime Minister in front of the platform. Some were in wheelchairs, while others had canes. Levon Martirosyan also stood with them. 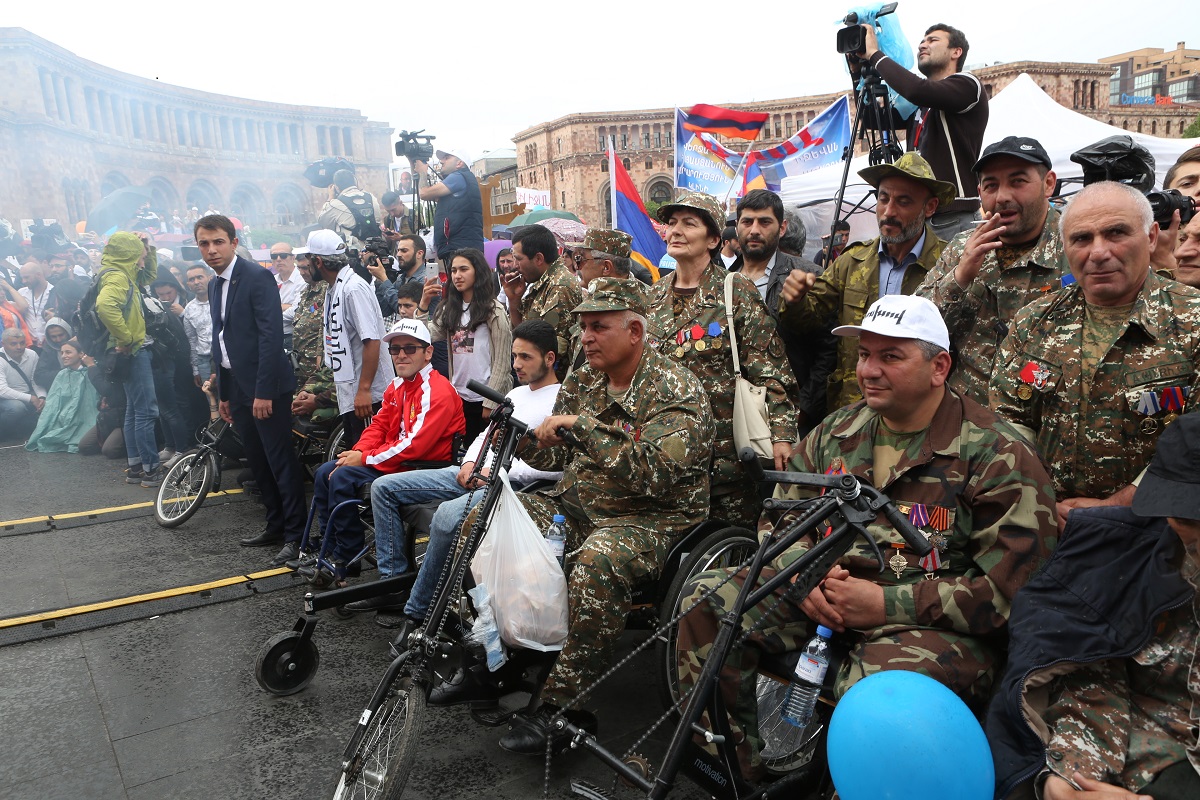 “I thought two times, seriously, about moving. The first time was a few years ago. But when the war began, I stayed and I went to fight. The second time around was several months ago. I tried living away from Armenia, but it didn’t work for me.”

“The country has been brought to a point where you simply can’t imagine a future for your child. During the war, there were dark, cold and hungry years, but people were not as disappointed because they knew what they were suffering for. The question remains: what are they suffering for now? Why have they been so deprived?” says Levon.

Levon participated from the very first day the demonstrations started. He was delighted by the participation of the youth.

“They say that Armenia is an aging country. But if its aging, where did all the youth come from? Now there is hope that there will be young people standing side-by-side with this new prime minister and he will not have to rely on the older generation,” jokes Levon.

He believes that in 2-3 months, there will be observable progress and changes in the country. The first thing that he is waiting for from the new government is a raise in pensions.

Colored umbrellas appeared above the heads of the people on the square. Several hours in a row the crowd watched as four girls joyously danced in the powerful rain.

David was on the stage. He was always more reserved than others.

David Hovhannisyan is the head of the MIND public organisation. It has long been a participant in the civil struggle. After the events of 1 March 2008, he has participated in practically all civil demonstrations. David came up with the main slogan for the revolution – #rejectSerzh (#merzhiSerzhin).

“Our struggle started on 1 March this year as well. After the annual march, my friends and I got together and discussed the political situation. We wanted to prove that Armenia is not Turkmenistan and that there can be no ‘Turkmenbashy’ here, that there are no other alternatives for the country.

“As a result of these discussions, the initiative ‘Reject Serzh’ was born, which later joined in with Nikol Pashinyan’s ‘My step’. We set out a program for ourselves. The minimum was to demonstrate resistance and to make the election of Serzh Sargsyan as difficult as possible. The maximum would have been to not allow it to happen at all.”

At the beginning of the fight, David understood that the older generation had no hopes and did not believe there was any reason to count on change. They had cast their bets on the youth.

“Starting in 2007 I used to say, ‘Our struggle is unbreakable, and victory is inevitable’. People thought I was crazy, an alien. But I believe in the laws of nature. Progress cannot fail to beat regress,” David says.

He believes that in Armenia, a unique revolution has taken place. The change of authorities is only just beginning. The end aim, David says, is to dismiss parliament which is incapable of reflecting the people’s will and to hold fair elections:

“The resignation of Serzh Sargsyan was the first step. Afterwards, it became clear that now the political will belongs to the people. After all these events, the agenda [of the country] will be dictated by its citizens. This is the main achievement of the revolution.”