The meeting, mediated by the OSCE Minsk Group, will aim to resume the negotiation process between Armenia and Azerbaijan at the level of heads of state, which was interrupted more than two years ago. 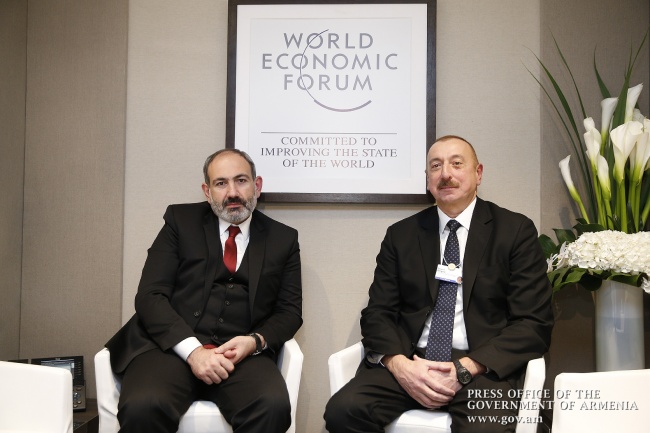 The March meeting of Nikol Pashinyan and Ilham Aliyev will be the first official meeting of the heads of state.

Until now, Pashinyan and Aliyev have met several times in informal settings. During these unplanned meetings, the parties were able to agree on establishing a calmer situation on the line of contact.

However, PM Pashinyan at the time stated that the informal meetings with President Aliyev could not be considered the beginning of the negotiation process – they were only meant to clarify the two sides’ positions and try to specify the subject of negotiations.

The foreign ministers of Armenia and Azerbaijan have also managed to hold several meetings during which an OSCE statement was made about the need to “prepare the peoples of the two countries for peace.”

The fact that Nikol Pashinyan and Ilham Aliyev had agreed to a meeting was announced in early March.

The approach of the Prime Minister of Armenia

Nikol Pashinyan announced his approach regarding the negotiations on the Karabakh conflict settlement immediately after he became prime minister.

Pashinyan says Nagorno-Karabakh must return to the negotiating table.

The Azerbaijani side does not agree with this, although the ceasefire document from 1994 was signed by the Karabakh party, which indicates its participation in the first stage of the negotiation process.

The negotiators, the OSCE Minsk Group Co-chairs, urged the sides to refrain from “unilaterally changing the format of the negotiations”, in a recent statement.

“We highly appreciate the efforts being made by the OSCE Minsk Group Co-chair countries in the settlement process. But the main question is who represents the people of Artsakh in the negotiation process … The fact is that there is no legitimate, authorized representative of Artsakh at the negotiation table today. Because, at the negotiating table, there is no official elected by the people of Karabakh, or, as some of our colleagues prefer to say, the Armenians of Karabakh.

“On multiple occasions I have said that the Prime Minister of Armenia has no such powers … And this is not a whim, not a precondition, but a question of legitimacy. And legitimacy is a key factor in modern relationships – not only in domestic politics, but also interstate and international relations. By the way, comments to the effect that the Republic of Armenia or the Prime Minister are absolving themselves of responsibility and imposing it on the authorities or the people of Artsakh are absurd … I consider it necessary to emphasise that the Republic of Armenia was, is and will be the main guarantor of the security of Artsakh and will continue to participate in the peace process.”

At a press conference on 19 March, when asked whether his approach would lead the the dialogue between the heads of state to a dead end, Nikol Pashinyan answered:

“New initiatives of Armenia, in the framework of the negotiation process on the Nagorno-Karabakh conflict, are not a challenge, but a call for dialogue … We will continue discussions with our friends on the basis of facts. Where our partners find our position inflexible, we can soften our position. But, we expect the same from our partners. Otherwise, it will not be negotiations.”

However, it is not clear what concessions the Armenian Prime Minister is ready to make regarding the format of the talks.

At his press conference, he also expressed his readiness to speak directly with the people of Azerbaijan and prepare them for peace:

“I don’t think that only the president [of Azerbaijan] should prepare his society for peace. I think that I should participate in the preparation of Azerbaijani society for peace and vice versa. I wonder if the President of Azerbaijan has something to say to the peoples of Armenia and Artsakh? I have something to say to the Azerbaijani people, and I would be very happy for this opportunity. But such an approach cannot be one-sided. A constructive atmosphere is important.”

Armenia is ready to move from defensive to offensive

After the leaders of Armenia and Azerbaijan agreed to strengthen the ceasefire agreement on the contact line, Armenian Defence Minister David Tonoyan made a statement that in case of the resumption of hostilities in Karabakh, Armenia would be ready to attack.

He also said that in connection with the change of strategy, new types of weapons are also being acquired, but the minister refused to say which ones: he only noted the purchase of Russian SU-30CM fighters and a defence credit line from Moscow to the amount of $100 million.

“The psychology is changing, approaches are changing, as defending armies always fail. We are not going to remain in a defensive position,” the minister said.

Traditional exacerbation on the border before the meeting

The latest incident on the Armenian-Azerbaijani border, according to Armenian media, occurred on 26 March. The Azerbaijani armed forces tried to carry out engineering work and advance their positions near the Armenian village of Berdavan.

From the Armenian Ministry of Defence it was reported that the Azerbaijani armed forces opened fire on Armenian positions. But, “the enemy was drowned out by retaliatory fire, and the engineering work was suspended.”

What do experts say

Armenian experts have remained restrained in their discussion of the meeting scheduled for 29 March.

Most believe that immediate results should not be expected, and that this will be the first difficult and serious dialogue between the heads of state.

Many Armenian political analysts suggest that the parties are currently only disposed not to compromise, but to achieve goals which are beneficial exclusively to their state.

President Aliyev has not yet made any official statements about the upcoming meeting with the Prime Minister of Armenia.

The Foreign Ministry of Azerbaijan however says that there will be no significant change forthcoming in its official position:

“…the last statement of the OSCE Minsk Group Co-chairs should be reiterated, in which they unequivocally supported the invariability of the format of the negotiation process. Similar statements were made by high-ranking officials of the European Union. This position of the world community serves as a serious message for Armenia, and also indicates support for the well-founded position of Azerbaijan.”

MP Elman Nasirov says that the president of Azerbaijan will have an advantage in these negotiations, because Pashinyan cannot change the format of the talks:

“Ilham Aliyev displayed a resolute and principled position on this issue with which the OSCE Minsk Group and the leadership of the European Union agrees. That is, Pashinyan is being sent to the meeting under serious pressure.

“If a prolonged pause occurs in the negotiation process, the fragile cease-fire may be seriously disrupted. The April War showed that…Pashinyan should be aware of the responsibility for the resumption of military operations and predict the consequences of attempts to make the puppet regime a participant in the negotiations.”

Azerbaijani soldier Ellez Ellezov died during the evening of 26 March as a result of an exchange of fire between the Armenian and Azerbaijani sides on the contact line of troops near Fizuli.

The Azerbaijani Ministry of Defence reported that the shootout was provoked by the Armenian side:

“On 26 March during the day, units of the Armenian armed forces resorted to provocations at various locations along the front. The Azerbaijani army suppressed enemy firing points.”

Also, the ministry refuted the message of the Armenian press that the Azerbaijani side had tried to push its positions forward:

“We officially declare that the broadcast information is not true – it is another provocation of the Armenian side and aims to aggravate the situation on the front.”

The head of the State Border Service of Azerbaijan, Colonel-General Elchin Guliyev, examined the situation regarding the troops of the Qazakh border detachment units. Measures have been taken to strengthen the protection of the territory and strengthen the border defence.

Instructions to strengthen the defensive positions were issued.