An Armenian judge has ruled to have former Armenian President Kocharyan released on bail.

Kocharyan had been in prison for five months on charges of ‘overthrowing the constitutional system’ and taking a $3 million bribe. His trial will now continue, but he will not be held in custody.

Kocharyan was not present when the judge announced his decision, and his lawyers announced that in the next few hours their client would be released.

What happened up until the announcement

He demanded the intervention of the authorities of the country and law enforcement agencies, referencing what he said were the ‘provocative actions’ of Hayk Sargsyan, a member of parliament from the ruling My Step bloc.

“There is information that the judge in the case of Robert Kocharyan is under pressure and wants to [have him released on bail] today. A person who seized the city of Yerevan with tanks, killed 10 citizens, crippled the fate of thousands of people, should not be allowed to be released on bail by two Karabakh presidents and under pressure from 20 to 30 participants of a demonstration in the courtyard of the courthouse. Only an impressive mass of the people, its ever-growing indignation and the inevitability of punishment will force the judge to make a fair decision. Today, at 13.00, let us all gather outside the court building … “

Hayk Sargsyan later deleted the post, however the message got out.

Hayk Alumyan stated that the MP violated the presumption of innocence of Robert Kocharyan:

“What is this, if not the crudest, direct pressure on the court? And after that we are told that now [ed. since the revolution] pressure on judges is [impossible] in Armenia? This statement is a fairy tale. Over the past year, pressure on judges has increased dramatically in the country.”

Kocharyan’s lawyer appealed to the President of Armenia to fulfill the obligation entrusted to him by the Constitution to protect the constitutional order:

“The fact that Hayk Sargsyan published this post on his social media page, and that his supporters continue to spread it, is nothing more than a direct call to overthrow the constitutional order. Namely, to put pressure on the judge with the help of the assembled people so that he would leave Robert Kocharian in custody.”

During the press conference, an appeal was also made to the Prosecutor General to accept this statement as a report of a crime and to open a criminal case.

The lawyer asked the police chief to take immediate steps to prevent the demonstration announced by the MP.

There was also an appeal to the Prime Minister of Armenia:

“Dear Mr. Prime Minister, we all know that such persons would not have made such an appeal without your approval. I urge you at least at the last moment to prevent such a development of events.”

Many more people gathered in front of the court building than on the days when the court hearings were being held. The situation was extremely tense.

It is difficult to say how much this was a consequence of the call of MP Hayk Sargsyan.

In order to prevent clashes, the number of police officers in front of the courthouse was also increased.

Supporters and opponents of the release of the ex-president tried to agree among themselves not to insult each other – as in the previous four days of court sessions.

Supporters of the ex-president chanted “Robert is a hero”, opponents of his release chanted, “Robert is a criminal.”

At the same time, music accompanied both demonstrations, as on previous days.

After the announcement of the judge’s decision, the supporters were jubilant, while opponents of his release left the area of the court.

What is the ex-president accused of?

Robert Kocharyan is accused of ‘overthrowing the constitutional order’ – that is, complicity in the events of 1 March 2008, when 10 people were killed as a result of military grade weaponry being used to disperse demonstrators protesting the results of recent presidential elections.

Kocharyan has been under arrest since December 2018.

In February 2019, another charge was brought against him – that of receiving a bribe of 927 million drams [about $3 million]. The accusation was related to a statement in November 2018 by Silva Hambardzumyan about giving an alleged bribe. Her statement talked about the period of Kocharyan’s presidency.

“I made a deal with an Arab businessmen, and in order for them not to get in the way, I paid both Armenian President Robert Kocharyan and Prime Minister Serzh Sargsyan,” Hambardzumyan said at a press conference at the time.

Hambardzumyan said the affair concerned selling 100 percent of the shares of a mining company to an Arab sheikh. The amount of the transaction itself was 40 million dollars.

Kocharyan said that the second case was initiated against him in order to freeze his assets.

The court hearings went on for four days.

Details of the first three days below:

Updated: issue of bail for ex-president of Armenia drags on 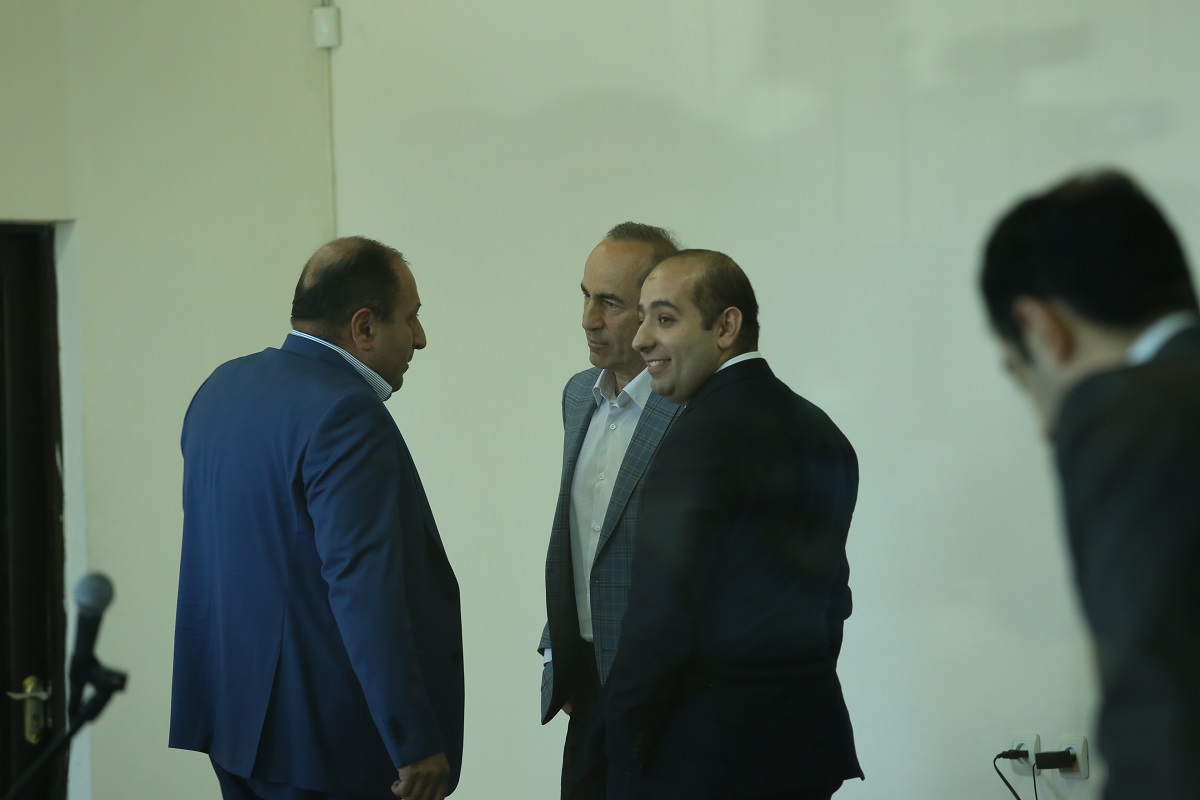 The 1 March case and the charges against Kocharyan

Kocharyan has been in prison on charges related to the 1 March 2008 case since December.

At the time, Kocharyan was the outgoing president. Presidential elections were held in late February 2008, according to which the Central Election Commission announced Serzh Sargsyan the victor.

Protestors came out in support of the first president of Armenia, Levon Ter-Petrosyan, and demanded a recount.

The demonstrators were dispersed with military grade weapons and soldiers. 10 people were killed as a result.

Kocharyan has thus been accused of brutally dispersing the demonstration and overthrowing the constitutional system.

The investigation of the March 1 case did not move a single step forward since its occurrence until the Armenian Velvet Revolution, when revolutionary leader and PM Nikol Pashinyan made it a cornerstone of his government’s administration.

From that day on, the second President of Armenia has been in prison.

Human rights activists believe that the authorities were forced to take this step under the pressure of international structures.