Ella Kesaeva: ‘I saw the tank firing. Who can prove anything to me now?’

Ella Kesaeva lives in Beslan and is engaged in goat-farming. Majoring in microbiology, she started breeding goats after 3 members of her family were killed and her daughter, Zarina, was seriously wounded but managed to survived, in that terrible terrorist attack on September 1-3, 2004.

“I decided to breed goats and cows two years after the terrorist attack. My father loved them so much, that when the kids were born, he, a true ‘meat-eater’, forbade to slaughter them. I also stopped eating meat; I don’t want to kill the animals. I make cheese and sell milk. My sister aspires to vegetarianism, too. And also, she completely refuses food and drink one day a week. But I think, she thus punishes herself for having survived,” says Kesaeva.

What does Ella Kesaeva seek after

Ella Kesaeva – it’s a famous name in North Ossetia, as well as in Russian. This name is familiar to many in other countries too. For already 12 years, Ella Kesaeva, together with a group of other women from Beslan, has been claiming that there was no impartial investigation into the developments in those 2,5 horrible days. And she has been insisting on conducting such investigation.

Kesaeva was among those 435 people, who signed a lawsuit, filed to the European Court of Human Rights (ECHR) in 2007. The court proceedings are still underway and there is no rough information as to when the court is going to deliver its judgment.

Throughout those 12 years, several groups and commissions probed into the terrorist attack independently of each other. However, they have failed to arrive at a common view. Many aspects of those developments are argued until now. And that’s, first of all, the question about how many terrorists there actually were.

It’s an extremely important question for Beslan residents. According to the official data, 32 terrorists were killed in the school building assault on the 3rd day of siege. 1 terrorist was captured alive and he is currently serving a life sentence. However, some independent investigations suggest that there were more terrorists and some of them fled.

Another point that stirs big controversy and criticism is the authorities’ actions during the negotiations with terrorists, their decision to storm the building and how all that was done.

The third issue, that the commissions were dealing with and that Kesaeva and her colleagues are still trying to figure out, is- why the Russian TV channels and print media were so limited and controversial in their coverage of the developments during the terrorist attack throughout the years after it.

“I saw it with my own eyes. I saw the school being shelled, and I was shouting: ‘What are you doing? Nobody will survive there!’. I saw the tank firing. Who can prove anything to me now?” Ella said calmly.

In her words, when she was starting the investigation 12 years ago, it seemed to her and to other women, that the matter would be cleared up soon and all the guilty would be punished.

“However, later it turned out that it was quite the contrary and they just wanted to hush us up. And then we also realized that our children’s death was used as an argument to pass a law on top-down governance and significantly strengthen their powers.”

Shortly after the Beslan terrorist attack, by the end of 2004, Russia abolished direct election of governors and heads of federation entities. Since that time, senior officials of the entities of the Russian Federation were elected by the territorial legislative assemblies, based on nomination of the Head of State.

“If my mother had been at school then, she would have been surely executed,’ – that’s what my daughter always says about me, because I can’t keep my mouth shut,” says Ella Kesaeva.

“My nephews weren’t going to school on September 1 – the eldest one was 16,5 years old and he considered themselves too big for the school ‘celebratory assembly’,” she said. “They saved money and were going to travel to the city to spend time with their friends. But suddenly their father arrived and urged them to go to school.”

“So, my sister’s 2 sons, their father and my daughter left the house. Whereas I stayed at home for a while and was going to follow after them, but when I went out, I saw a car driving to the building and the terrorists rushing to it… I saw it firsthand, because our house is near the school. I hurried in that direction, but suddenly someone grabbed and dragged me away. It was our neighbour.”

“Throughout these years, I’ve been asking myself why I am still alive. I’m a religious person. So, I think, it was probably the God’s will.”

Ella Kesaeva’s family lost 3 of its members in that terrorist attack. Ella’s nephews died, their father was shot dead in public on the very first day of school siege, when he tried to calm the children down in Ossetian language, which was forbidden by terrorists. Her daughter, Zarina, was wounded, but she survived. 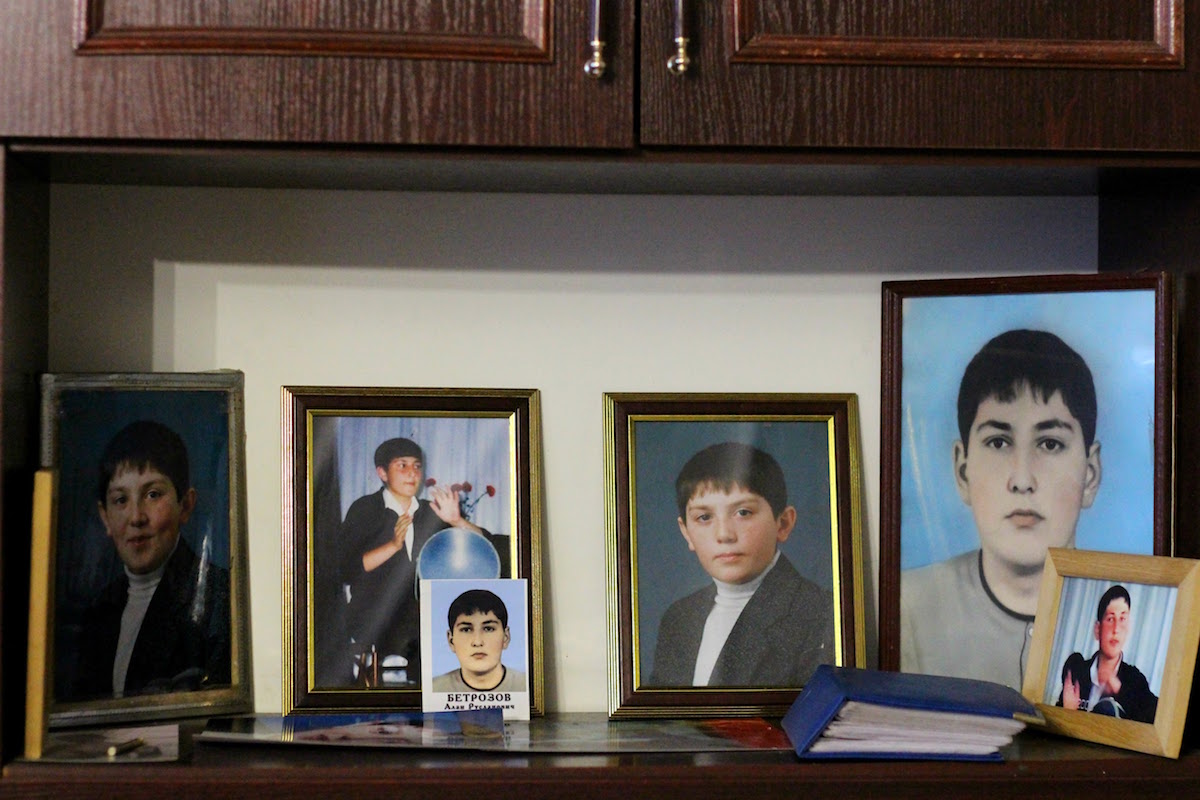 Ella Kesaeva says, she wouldn’t have believed if someone had told her 12 years ago that after so many years they would be still seeking justice.

There are no results of the official governmental investigation and the criminal case hasn’t been formally closed yet. However, there are no signs of any work carried out in this regard either.

It’s a long period, but I feel that we will finally get the truth,” she said.

When Kesaeva says ‘we’, she means her friends, the mothers who also experienced that grief on September 2004. They have long united into the organization entitled ‘Voice of Beslan’. In 2008, they were deprived of legal status, but that has hardly changed anything either to them or to those, whose attention they are trying draw.

More than 100 court hearings on the claims and lawsuits filed by the ‘Voice of Beslan’ have been held throughout these 12 years. The most recent court hearing, held on September 2006, turned out to be the most scandalous one. Ella Kesaeva and her 4 colleagues held a rally on the day of anniversary of the terrorist attack. They were wearing T-shirts with the inscription that read: ‘Putin executed Beslan’.

All rally participants were arrested. One of the women was beaten hard during the arrest.

Later, all 5 persons were sentenced to public works and imposed RUS5,000 fine [approximately US $80].

But the ‘Voice of Belsan’ is not going to surrender.

A theatrical play entitled ‘New Antigone” was premiered at Moscow-based ‘Theatre.doc’ documentary play theatre, in December 2016. The play was staged based on court session materials by journalist Elena Kostyuchenko. She attended that rally in Beslan in September 2016 and she was also attacked and arrested.

“Antigone” is a tragedy by Sophocles, written 2,500 years ago. The play character opposed the authority and followed her call of conscience. Antique Antigone knew that she was right and believed in justice or, at least, in the rancor of gods of the Greek pantheon.

Throughout the years of litigation, Ella Kesaeva has become a savvy lawyer. She even helps her friends to do the paperwork. Yet, she believes, her mission and job is to finds out the truth about Beslan.

Jointly with Italian journalist, Massimo Bonfatti, Kesaeva wrote and published a book, which describes the developments of those days. She is now planning one more project – a chronicle of all court proceedings.

“We’ve recently received the letters from the Italian school students,” says Ella Kesaeva. “During the classes, the teacher told them about our tragedy and the recent rally. So, they wrote us a letter. We’ve found such amazing words there. So, we aren’t doing all that in vain. People hear us and start thinking about it.” 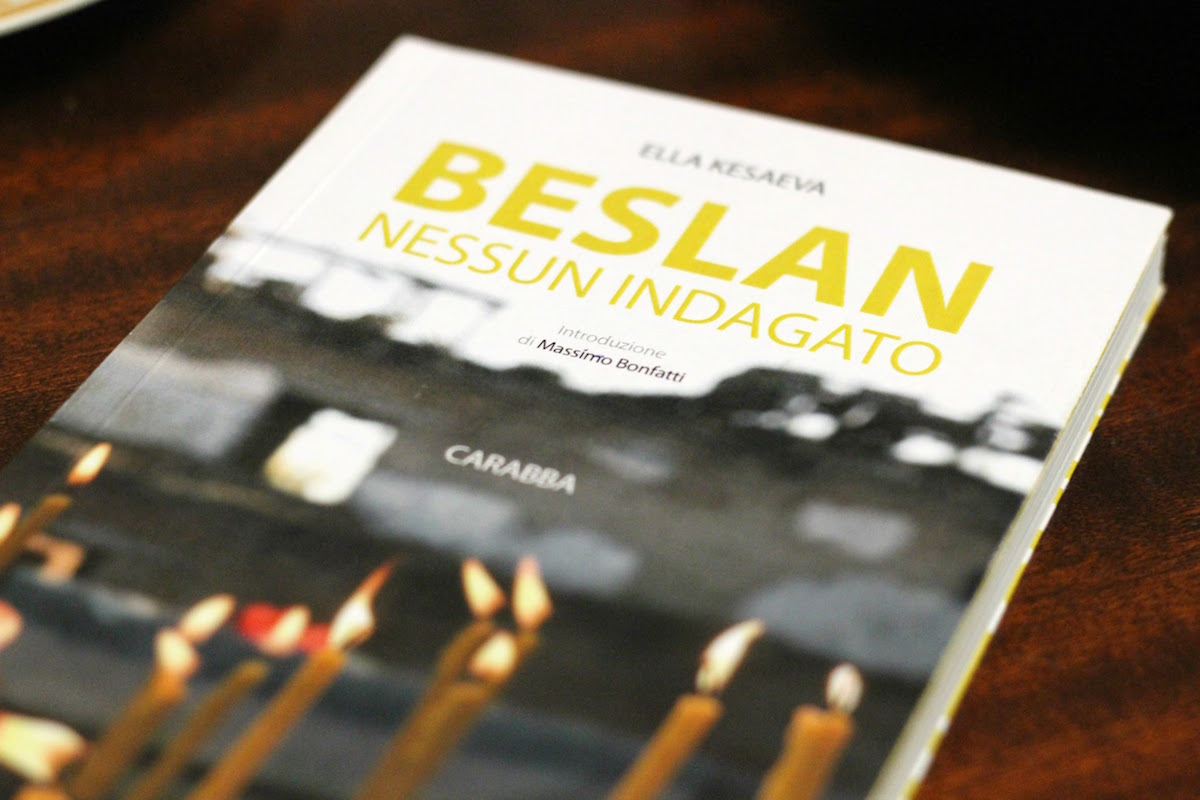 What will ‘Voice of Beslan’ do

They pin hopes on the European Court of Human Rights. Beslan case has been considered by court for already a decade.

“If it happens so and no one is eventually punished, how am I supposed to further live with all that? Kesaeva wonders.

However, even when, and if, the European Court delivers its judgment, it still doesn’t mean that someone will be punished. In 2015, the Russian State Duma abolished a principle of priority of the international law over the domestic one in Russia. The law on prevalence of the Russian Constitutional Court ruling over the verdicts of the international instances, was supported by 436 MPs. Only 3 MPs opposed it.

“It’s all about the Koschey’s needle (Koschey the deathless, a Russian folk take character, whose death was hidden separate from his soul inside the needle-ed.). Well, you probably understand, whom I mean. But his being on this post isn’t eternal. Therefore, I often tell my friends that when this day comes, we should be as fit as fiddle,” says Kesaeva.

The life of those, who suffered in 2004, has been long divided into ‘before the terrorist attack’ and ‘after it’. Ella Kesaeva, a food industry microbiologist, is now the chairperson of the ‘Voice of Beslan’ public committee and a goat-farmer. Ella’s daughter, who was held hostage in that school at the age of 12, dreamt of becoming a lawyer before the terrorist attack, whereas now she is studying medicine. 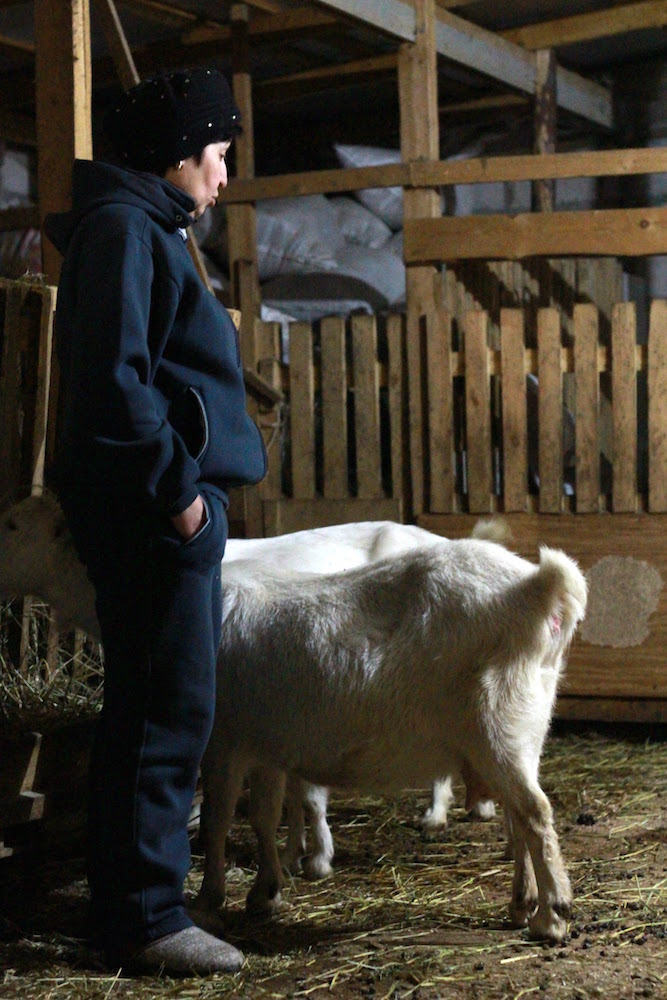 US may make 15% of aid to Georgia contingent on reforms

US may make 15% of aid to Georgia contingent on reforms