The center of Istanbul, especially Taksim Square and Istiklal Avenue, are very lively today, with music, dance and marches everywhere – some chanting party slogans, others holding flags and portraits of party leaders.

Today, June 23, the city will elect its mayor in repeat elections.

Supporters of the ruling Justice and Development Party sing a song dedicated to President Recep Tayyip Erdogan, and supporters of the opposition candidate chant the main slogan of his election campaign: “Herşey çok güzel olacak!” (“Everything will be very good!”).

In the previous elections held on March 31, the candidate of the opposition party Ekrem Imamoglu won by a small margin – he took 48.80% of the vote, and his opponent from the government party Binali Yildirim received just a bit less, with 48.55%.

But the new mayor lasted only 19 days – the ruling party appealed the election results, and a second vote was scheduled.

• Turkey between Erdogan and Gulen

• Turkey: inflation out of control, opposition hopes to gain

In April 2017, amendments to the constitution were adopted by a referendum initiated by Turkish President Recep Tayyip Erdogan, which strengthened the powers of the president and entailed a transition from parliamentary to presidential rule. The referendum was held in a state of emergency, and the opposition disputed its results.

In June 2018, Erdogan was again elected president of Turkey, receiving 52.6% of the vote. Then his party won the parliamentary elections, receiving 42%.

If you don’t succeed at first

Many are unhappy that repeat elections are being held – some people with whom we had a chance to talk on the streets of Istanbul consider such an expenditure of funds by the authorities to be inappropriate given the difficult economic situation in the country.

The opposition party, which lost the post of mayor, believes that the decision to hold repeat elections is “absolutely political.”

“In Turkey there is the problem of one-man rule [President Erdogan]. Since the referendum, our party is trying to explain this to citizens”, said Dunya Senturk, a member of parliament from the opposition Republican People’s Party (CHP), told JAMNews.

“If you give all powers to one person, the courts will not be free, autocracy will arise, all decisions will be made at his will. If this person is dissatisfied with the election results, you will have the situation we currently have in Turkey now. Judges under pressure will decide on a repeat election until a result is achieved that satisfies this person. Unfortunately, in Turkey, faith in elections and the law has been undermined.”

For its part, the ruling party says the decision to contest the results of the previous elections was a “forced step.”

“We are not supporters of repeat elections. On March 31, there were elections and violations occurred. After the protest of the Republican People’s Party, we were forced, on the basis of violations recorded also by the Central Election Commission, to run for repeat elections on June 23”. Ibrahim Khalil Aslan, head of the department for foreign affairs of the Istanbul branch of the AKP, party told JAMNews. 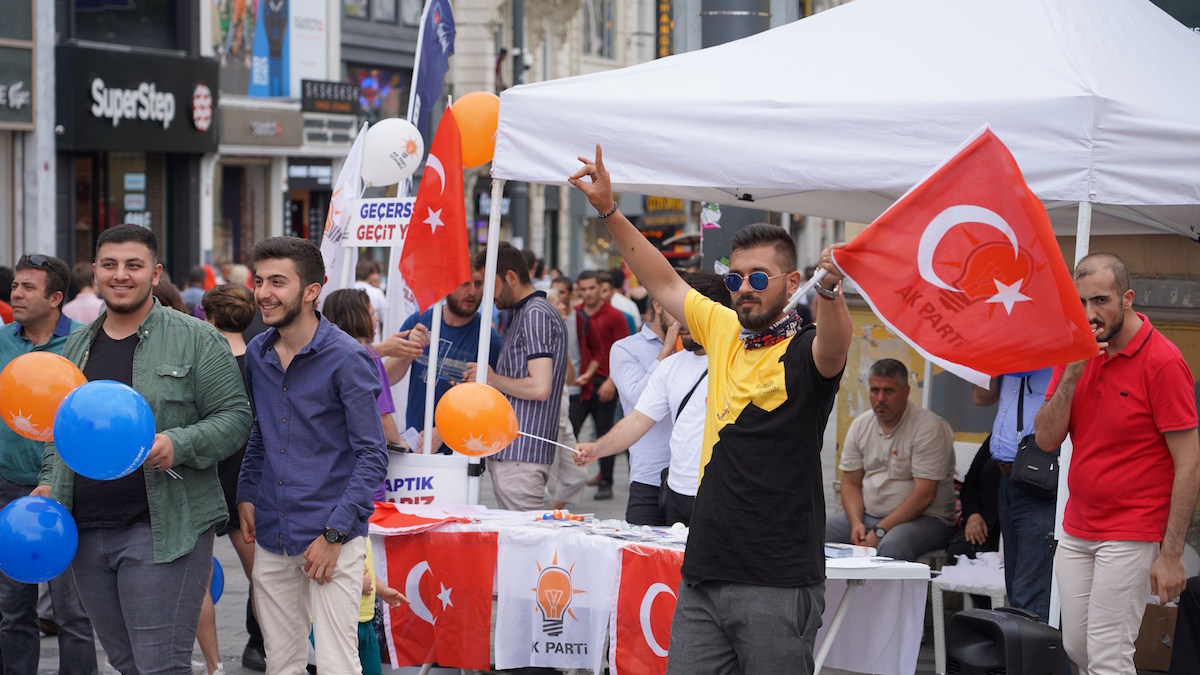 For 25 years, the mayor of Istanbul has been a candidate from the ruling party or its allies – the Rifah and Fazilet parties.

In 1994, current President of Turkey Reccep Yayyip Erdogan became the mayor of Istanbul, and this is the first serious success in his political career. Experts believe that this is why Istanbul is so important for the ruling party.

But the opposition adds to this other, equally important factors, such as financial control:

“Istanbul is the heart of Turkey, the main financial center, and therefore the feeder of the  government. To conquer Istanbul is tantamount to conquering Turkey”, says Derya Senturk.

The ruling party believes that it has much to be proud of. During the rule of the ruling AKP in Istanbul, new metro lines were built and new buses appeared.

In the previous elections, the ruling party won the elections in Istanbul by a large margin.

But recent elections have shown that Istanbul residents are no longer so pleased with their rule. To win, both the ruling party and the opposition have created coalitions.

“We created the Cumhur alliance with the Nationalist Movement Party (MHP). Our opponents, the CHP, made an alliance with the Iyi Party and HDP. These parties in Istanbul and throughout Turkey have a rather serious electorate. Alone, these parties have always lost to the AKP. But they found a way out in uniting against Erdogan,” explains Ibrahim Khalil Aslan.

JAMnews conducted a survey on the streets of Istanbul: “Who will be the best mayor and why?”:

The support lent to the opposition party by the HDP, which largely represents the interests of the Kurdish minority, has provided the ruling party the chance to call their opponents “supporters of terrorists.”

The HDP (the People’s Democratic Party) entered parliament with 10.5 of the vote in the last parliamentary elections.

Currently, several deputies from this party, including its chairman Selaheddin Demirtas, are serving sentences on charges of supporting Kurdish terrorist groups.

After the announcement of repeat elections in the Istanbul municipality, Demirtas appealed from prison to his Istanbul supporters and urged them to vote for the opposition candidate, Ekrem Imamoglu.

“Just what won’t they about us, about people who did not vote for them. They even called us terrorists. But we are citizens of the Turkish Republic, and Muslims, more true Muslims than themselves”, said one Istanbul residents who supported Imamoglu in the previous elections.

Despite the serious recriminations, the CHP announced its readiness to manage the largest city of Turkey within the framework of cooperation with other parties, including the ruling “AKP”, in case of winning the elections in the municipality.

“We want to get rid of the management system, in which all roles are assigned only to party members of the powerful. The main factor for us is the human factor. Religion, confession, ethnic origin, political views of a person are not decisive for us. We are eager to work with everyone who is an expert in their field”, says Derya Senturk.

“Will AKR, in the event of a victory in the elections, cooperate with other parties?”, JAMnews asked AKP spokesman Ibrahim Khalil Aslan.

“We will in no way shake hands with parties united in one alliance with those whose hands are in the blood of martyrs.” 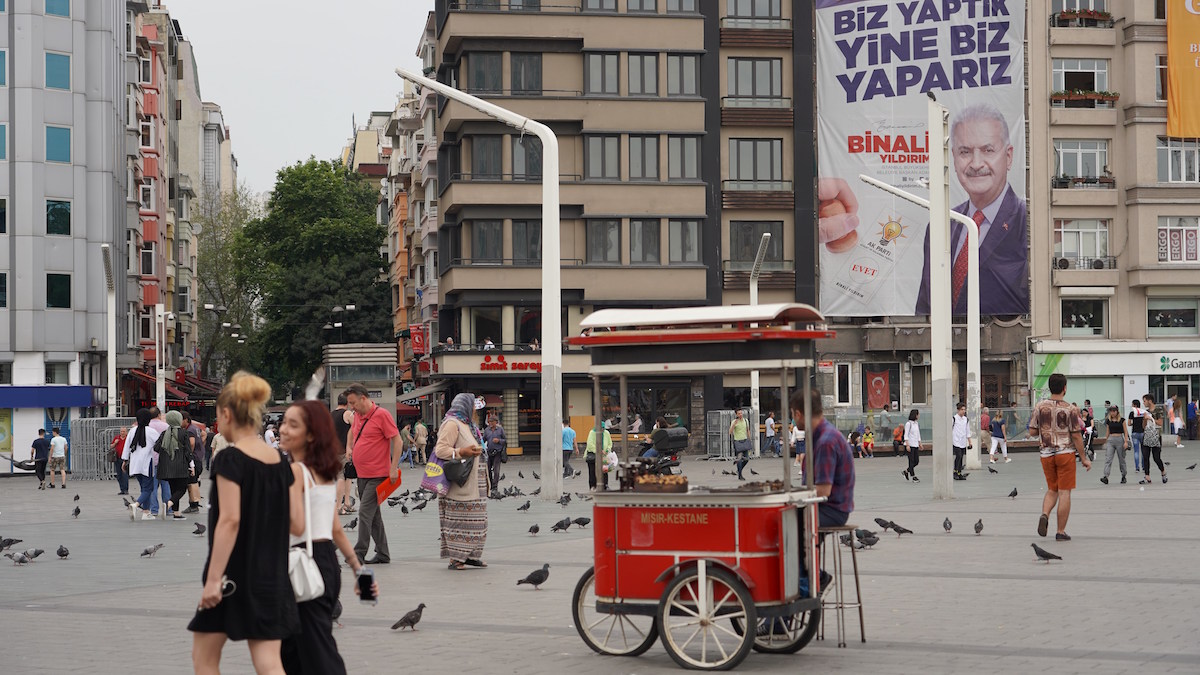 The most difficult thing now is to predict the victory of this or that party in today’s election.

Many experts say that since March 31, there have been practically no changes in the mood of the voters and the position of the parties.

In an interview with MedyascopeTV, chief director of research and consulting company KONDA Bekir Agyrdir said that from the last election to the present there was no jump in the number of supporters of the opposing parties:

“Over the past period of time, neither Binali Bey’s supporters nor Ekrem Bey’s supporters changed their convictions, and have not made decisions to vote for other candidate. I think that people have already decided who they will vote for. The victory of one side or another will again depend on that tiny difference in percentages.”

Indeed, the popularity of candidates among residents of Istanbul seems about equal.

Even according to the results of our blitz poll on the streets of Istanbul, the votes of candidates’ supporters among the respondents were shared almost equally.

Supporters of the ruling party say under the ruling party, there have been a number of successful projects in the city and the welfare of the general population has increased.

However, the economy in recent years has been in a crisis – the rate of the lira is falling, inflation, according to official data, for the period from January 2018 to January 2019 has reached more than 20%. Should the opposition candidate win, some voters hope that the authorities will be more ready to address their mistakes.

34-year-old Esma, who works in the service sector, explains her position:

“I love Erdogan. But I will not vote for him. Because after all his ‘successful’ feats, our life has become very difficult. They say that salaries have increased. True, but prices have gone up more than our wages. They (the authorities) cannot stop the increase in prices.”

“Apparently, a person stops seeing even the tip of his nose if he sits at his post for too long. For me, Imamoglu is a hope. I don’t expect any good transformations from the CHP, but I’m sure that if the AKP loses Istanbul, Erdogan will understand his mistakes and he will have the opportunity to correct them”, she says.