Blackout in Azerbaijan: how it happened, who is to blame and how will they account for it

Just one incident at the Mingachevir thermal power plant left the whole country without power, water, traffic lights and metro for two days. What happened?

A chronology of events

The power went out in the early morning hours of 3 July in Azerbaijan. People struggled to cool down in the +40°C heat as air conditioners stopped working. However, all three mobile operators and mobile internet services continued to function, with social network users from across the country reporting the power outage.

The power came back on later that morning. The AzerEnerji power company explained that the blackout was caused by overheating at the Azerbaijan Thermal Power Plant (TPP) in Mingachevir. Cooling fans failed and a fire broke out.

The Mingachevir thermal power plant TPP is the largest in the South Caucasus, with a total capacity of 2 400 megawatts. Its construction began in 1974 and consists of 8 blocks, the first of which was launched in 1981 and the eighth in 1990.

The power came back on 3 July, however, water stopped running. Azerbaijan’s water supplier, Azersu, put out a statement saying that due to problems with electricity, water processing at the purification plants on the Kura River and the Jeyranbatan Reservoir had been suspended.

The evening of 3 July saw another power outage in most of Baku and other areas. This time there was a failure at the alternative stations used to replace the Mingachevir TPP.

The Baku metro shut down on the morning of 4 July, and was operational only by the evening. Water and electricity were provided with varying success. It took until 6 July to fully restore the water supply.

At present, the main TPP is down and the country’s energy supply is being provided by increasing the capacity of other TPPs, with Georgia and Russia supplying the lacking energy.

At first, government-aligned media only reported reactions of individual departments and announced that ‘the president created a special commission’.

On 4 July the special commission’s meeting was aired on the state television channel, and then President Ilham Aliyev addressed citizens for the first time thanking them for their patience and understanding.

Patience and understanding, indeed, have been shown. Although people expressed themselves in the spirit of ‘officials ate the money for repairs again, that’s how everything broke down’, the indignation was unaddressed to specific officials or departments. In general, the blackout was perceived as a kind of natural disaster. Nobody demanded an apology, and no one apologized.

Stories about the ‘July Apocalypse’ in a JAMnews photo report

The president further demanded a response from the ministers and other members of the commission, with each reporting what was being done in their sphere.

First Deputy Minister Yagub Eyyubov and chairman of the commission said that he inspected the scene of the incident. According to him, about a thousand litres of oil poured out of a broken transformer directly onto the cables and technical equipment nearby, starting the fire at the power plant. Another electric block, which ran on gas, also stopped working. The gas also caught fire.

The accident did not only inconvenience the population, but also caused economic set-backs.

Additionally, some electricity had to be bought from Russia and Georgia.

This was when the citizens of Azerbaijan enjoyed the spectacle of a man in power with his head down like a guilty schoolboy, and the following dialogue:

“ … I express my deep gratitude for taking control of the situation in connection with the accident at the thermal power plant. Over the past 15 years in the energy sector under your leadership …” Pirverdiyev started, before being interrupted by the president:

“We know what has been done in 15 years. Tell me why the accident happened and the country was in the dark. For what reason?”

Further, the president chastised Pirverdiyev for the harm caused and demanded a thorough investigation.

The causes of the disaster became more or less clear after the speech of the head of the Ministry for Emergency Situations, Kemaleddin Heydarov. He said that the Mingachevir Thermal Power Plant has grown obsolete and functioned with systematic violations of safety rules, of which the Ministry of Emergency Situations had warned the leadership of AzerEnerji after each of its visits. In confirmation of his words the Minister presented a thick stack of the issued warnings.

Coping with the ‘July apocalypse’

Many hospitals either had broken generators or none at all. Rumours about numerous deaths and births by candlelight and more were circulating on social media. The Ministry of Health denied these rumours and claimed that there were no lethal outcomes among infants or adults. But eyewitnesses say that the hospitals were not ready for the disaster.

According to a nurse of a hospital in one of the suburbs of Baku, the generator there worked only in the operating theatre and resuscitation unit. A doctor at a dental clinic admitted that he had to cancel all patients scheduled for 6 July as the clinic tried to urgently have a generator installed.

The transport system turned out to be the biggest inconvenience for Azerbaijanis, in many respects because of the heat.

The head of Azersu, the company responsible for supplying water, reported to the president that they had dealt with the issue. Those regions where water is supplied by pumps ‘went into saving mode’. Containers of water were delivered to those areas lacking running tap water.

Strange as it may seem, the situation was not so difficult because not all residents of Azerbaijan have access to running tap water. At least forty per cent of Baku residents receive water on a schedule, that is, several hours a day only. In many towns and cities people use groundwater from wells. For them the problem was that pumps which pump water into the tanks did not work without electricity. There are water tanks in both city apartments and on the roofs of private houses. People had their own ‘plan B’ for water shortages.

The ‘spoiled’ residents of the few districts which had a constant supply of tap water suffered most. 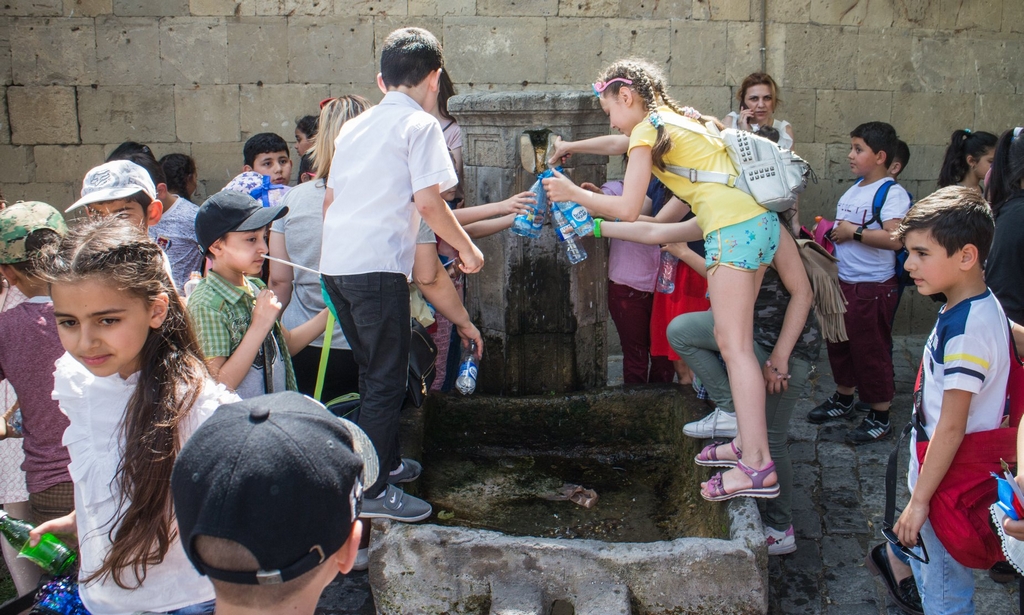 Who will be punished and how?

Azerbaijani social media users are divided between two trending sentiments: ‘Do not panic, the government will take care of everything’ and ‘they do not care about us’.

The reaction to the president’s speech and officials’ reports corresponded to the ‘camp’ to which these comments belonged:

Both camps doubt that the head of AzerEnerji will be fired. It seems more likely that he will be punished informally or simply ‘scolded and forgiven’.

Nevertheless, the chief prosecutor of Azerbaijan Zakir Garalov said that the prosecutor’s office started a criminal case on charges of abuse of official power, violation of safety regulations and criminal negligence.

But, as experience has shown, opening a criminal case in Azerbaijan does not mean that the results thereof will be reported in the near future.