The Armenian border town Berkaber is just 800 metres from Azerbaijan. Two kilometres of the border lie on land, and another two cut through a water reservoir. The Joghaz reservoir has been one of the main attractions of the village and the entire region since the 1980s. In Soviet times, the farm plots in the region, both in Armenia and Azerbaijan, were even irrigated with its water. 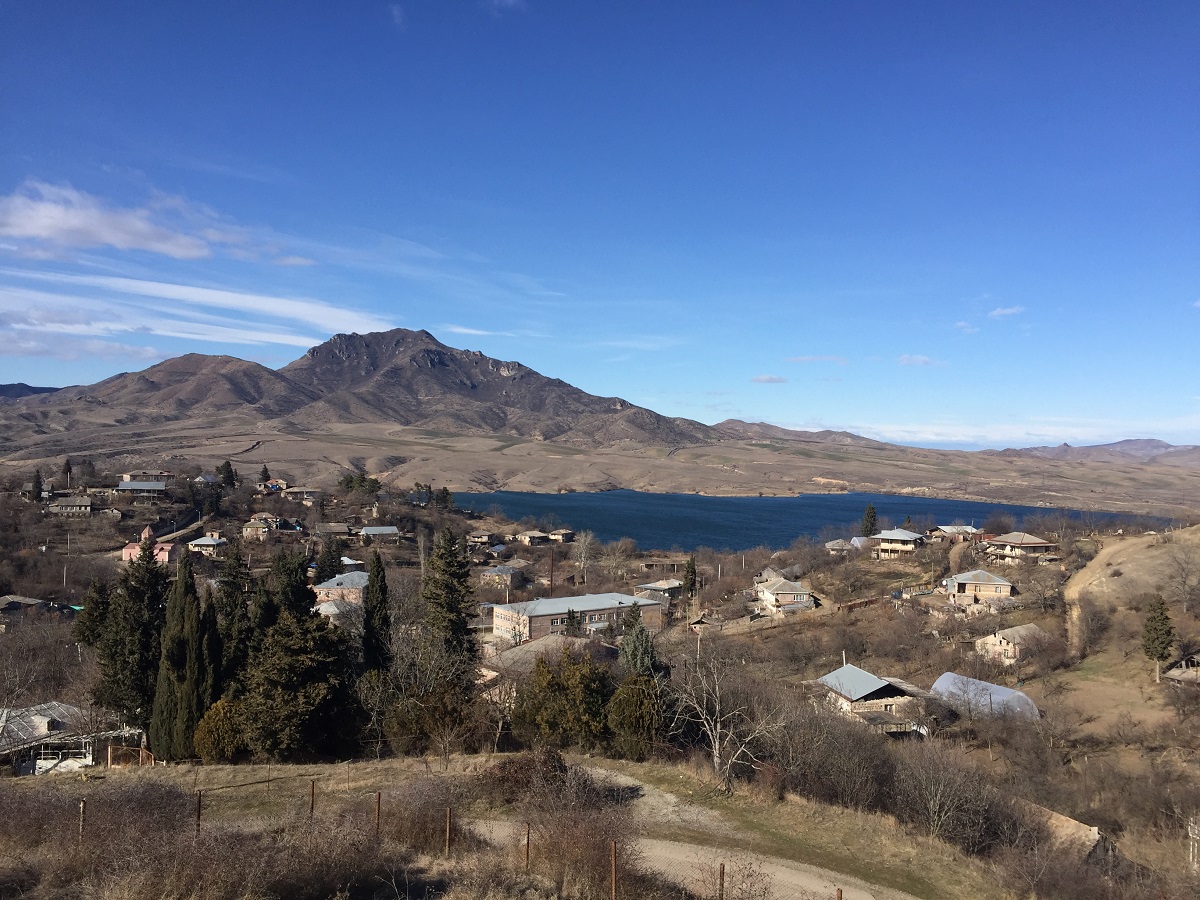 The Karabakh conflict made the reservoir inaccessible to both sides. It is no longer used for its intended purpose and has instead turned into a buffer zone between Armenia and Azerbaijan.

For Tatul Mailyan, the Joghaz reservoir is his workplace. The 29-year-old resident of Berkaber earns his living by fishing here, and he is not alone as there are five other fishermen in the village. 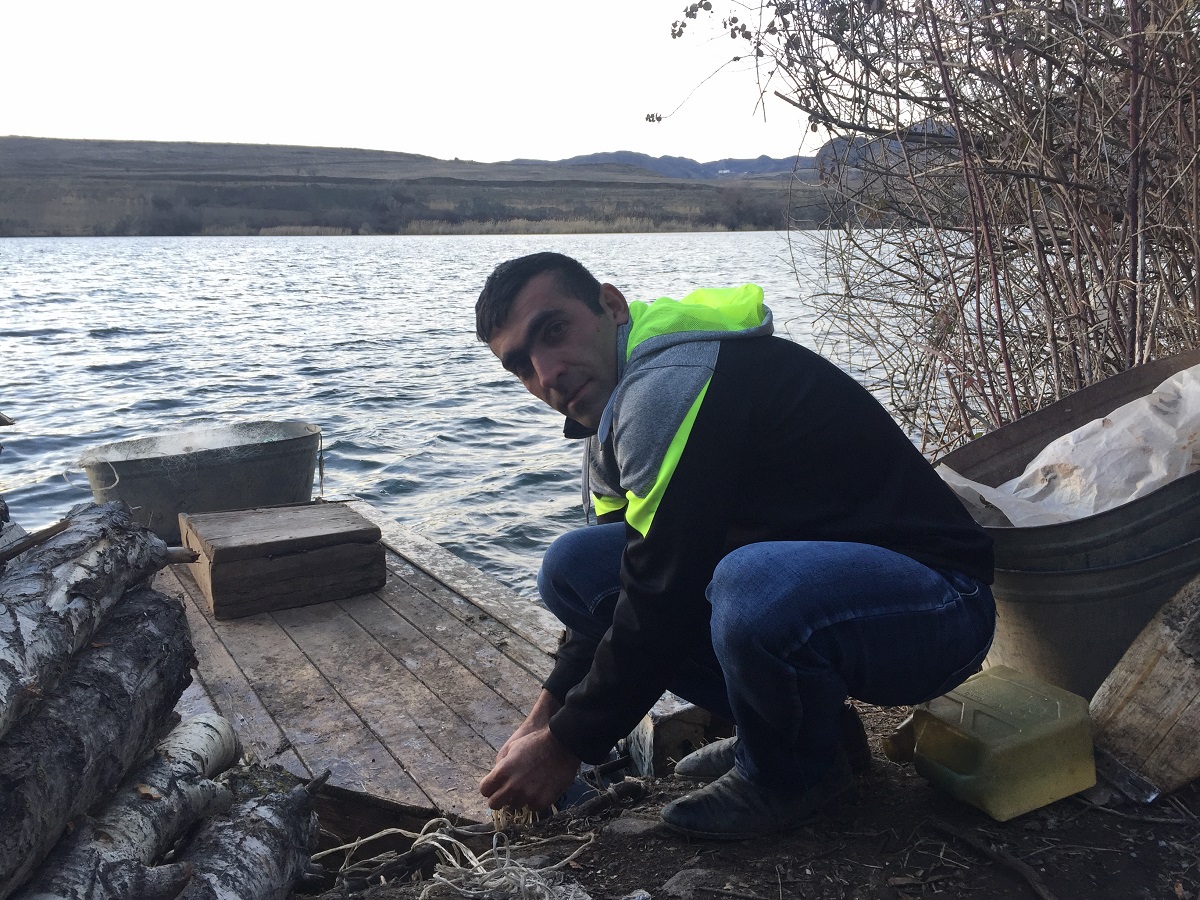 Each time he approaches the reservoir, Tatul thinks: “Will they shoot from that side of the bank, or will I be lucky again?”

“There is always danger. But what can you do? We don’t shy away from fishing further out from shore. For example, at this time of year, it is better to fish in the deeper parts. Recently the situation has been quieter. They [the Azeris] also sometimes fish, but less often than we. The area where I fish is just 400 metres from the opposite shore. They see us, and we see them. What is there to say? They are people too!” says Tatul Mailyan. 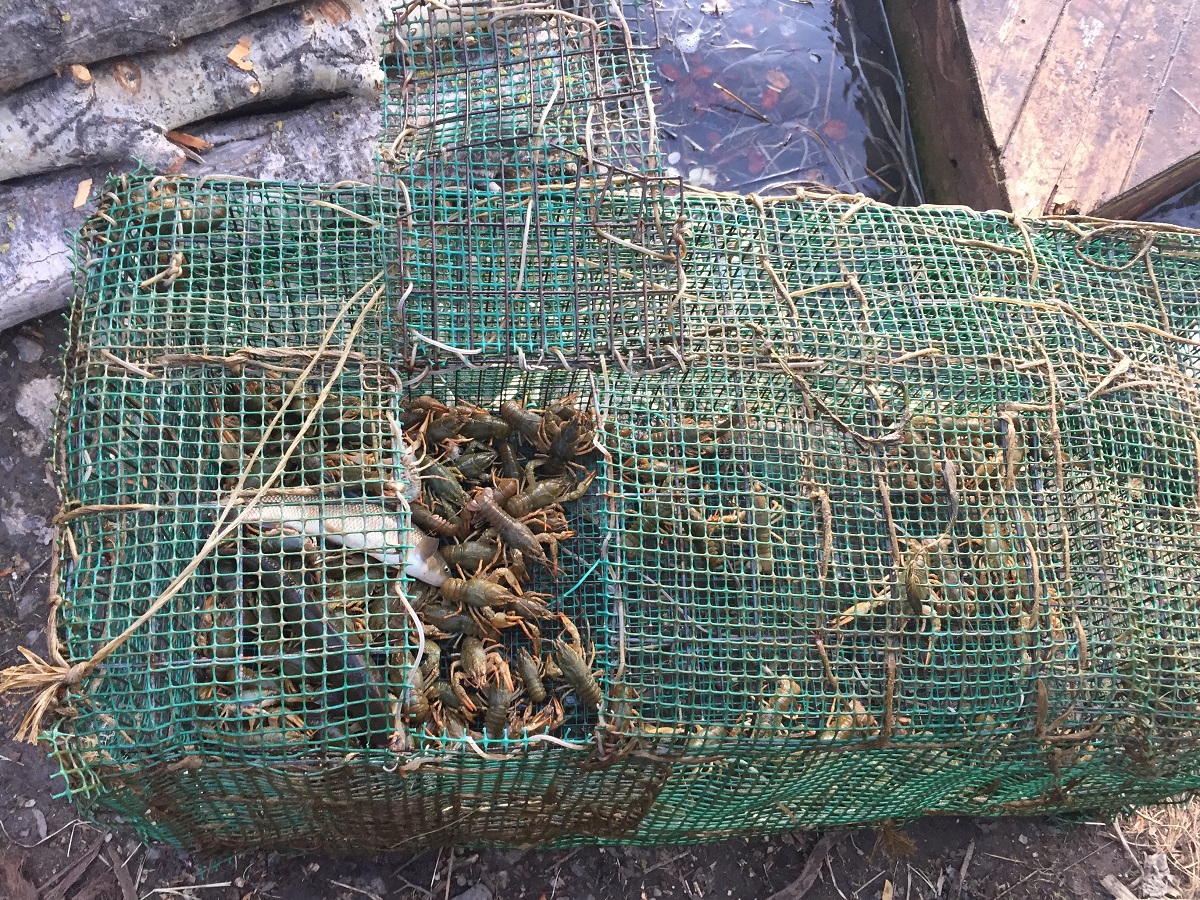 Berkaberians say that although the shooting has continued for decades, it doesn’t mean they have gotten used to it. All 567 locals live in fear. One resident says:

“We sleep like hares — with eyes open, so that in the event of a shooting we have time to gather the children and run to the basement. This is a situation of neither peace nor war. Of course, we hope that peace will come soon. We haven’t gotten around to repairing the house. What if there is a bombing again, and everything collapses?”

“But I’m not going to leave. Where should I go? This is my home. If I leave, another will leave, and who will stay?” says the father of three children and war veteran, 45-year-old Robert Khudaverdian. 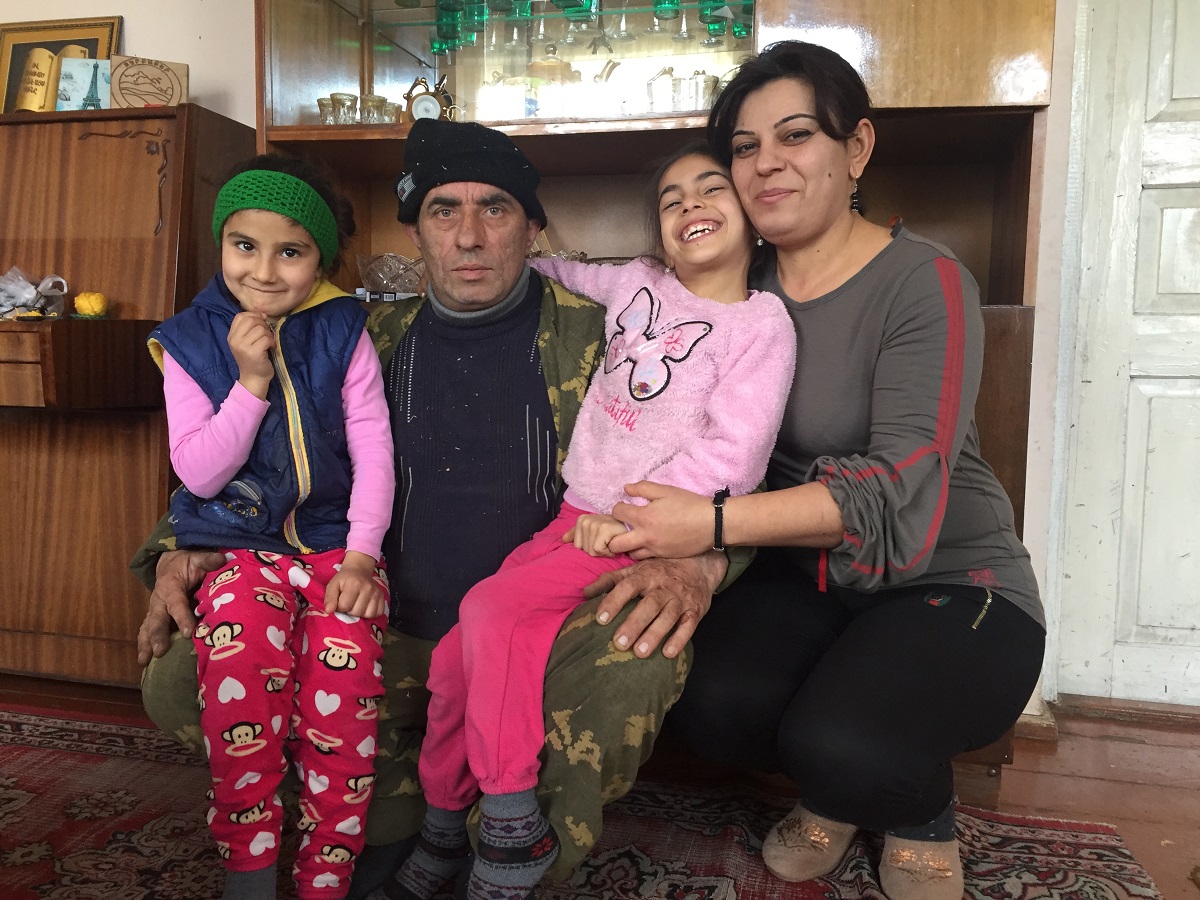 Many of those who left did not return to their hometowns – this can be seen from the number of pupils registered in the local secondary schools. Before the war, at least a hundred pupils studied here, now, there are just 47.

However, local villagers say they are optimistic about the future – much in part due to last year’s velvet revolution, led by current Prime Minister Nikol Pashinyan.

“Now we even have a family who has returned from abroad!” says village headman Argam Arzumanyan. “People are offering new ideas, bringing them to life – people are doing all they can for the village to develop. People are inspired, and [they believe] that now there will be a new and better approach to border villages, as everything will be distributed fairly.”

Various sources put the number of casualties on both sides of the conflict at 20,000 – 30,000. Ten of them are buried in Berkaber. In addition to these irrecoverable losses, the vast majority of local residents lost a considerable amount of land.

Around 75 per cent of the rural land that used to belong to this village is now under the control of Azerbaijan. Village resident Suren Khudaverdyan showed us his plot from his home – a piece of land on the opposite bank. He says that only 84 hectares of arable land are available to the village today. Every family gets about 5,000 – 6,000 square metres of land. 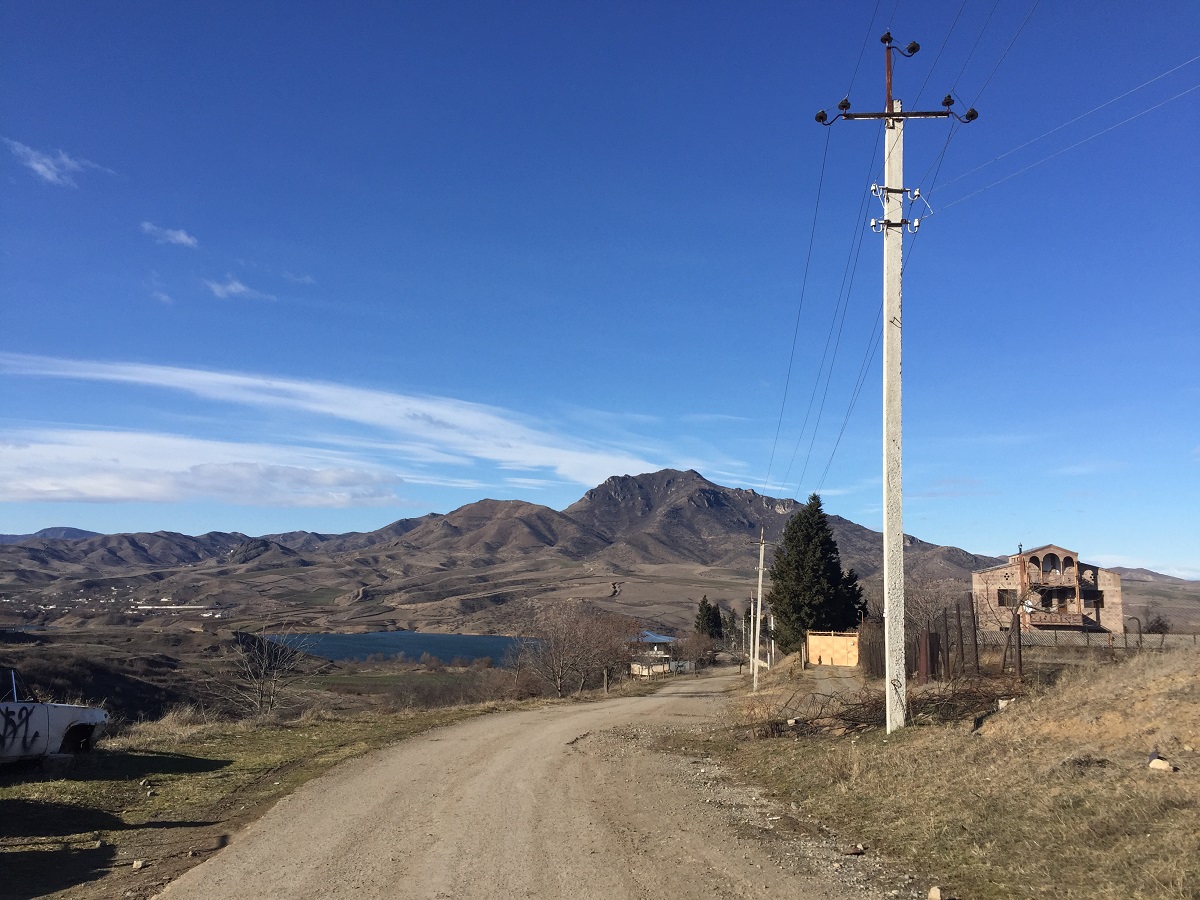 Because of this, many Berkaber residents have begun using greenhouses to grow their crops.

You can see the greenhouses scattered about the private plots like sails. Village headman Arzumanyan says there are currently 22 of them in the village, and that they mainly grow tomatoes, cucumbers and peppers.

Suren Khudaverdyan says that the organization Sahman [Arm. border] helped him build his greenhouse. The organization gave Suren the task of growing seedlings here for greenhouses throughout the region:

“Every year we grow about 10 thousand sprouts, and people buy them for their greenhouses. They give harvests earlier than in vegetable gardens, and therefore they can sell their produce for more.”

The land in the village is very fertile, and locals claim that any fruit sapling will take root. Greenhouses were popular in Berkaber in Soviet years as well, when lemon farming was popular at the time. The village used to produce about 2-3 tonnes of lemons. Locals say they want to restore this tradition.

In the greenhouse of 65-year-old Edik Harutyunyan there are 31 lemon trees which have grown so large it is difficult to pass between them. In Soviet years, Harutyunyan was a senior agricultural expert in the village, and now he has decided to establish two large lemon orchards in Berkabera. 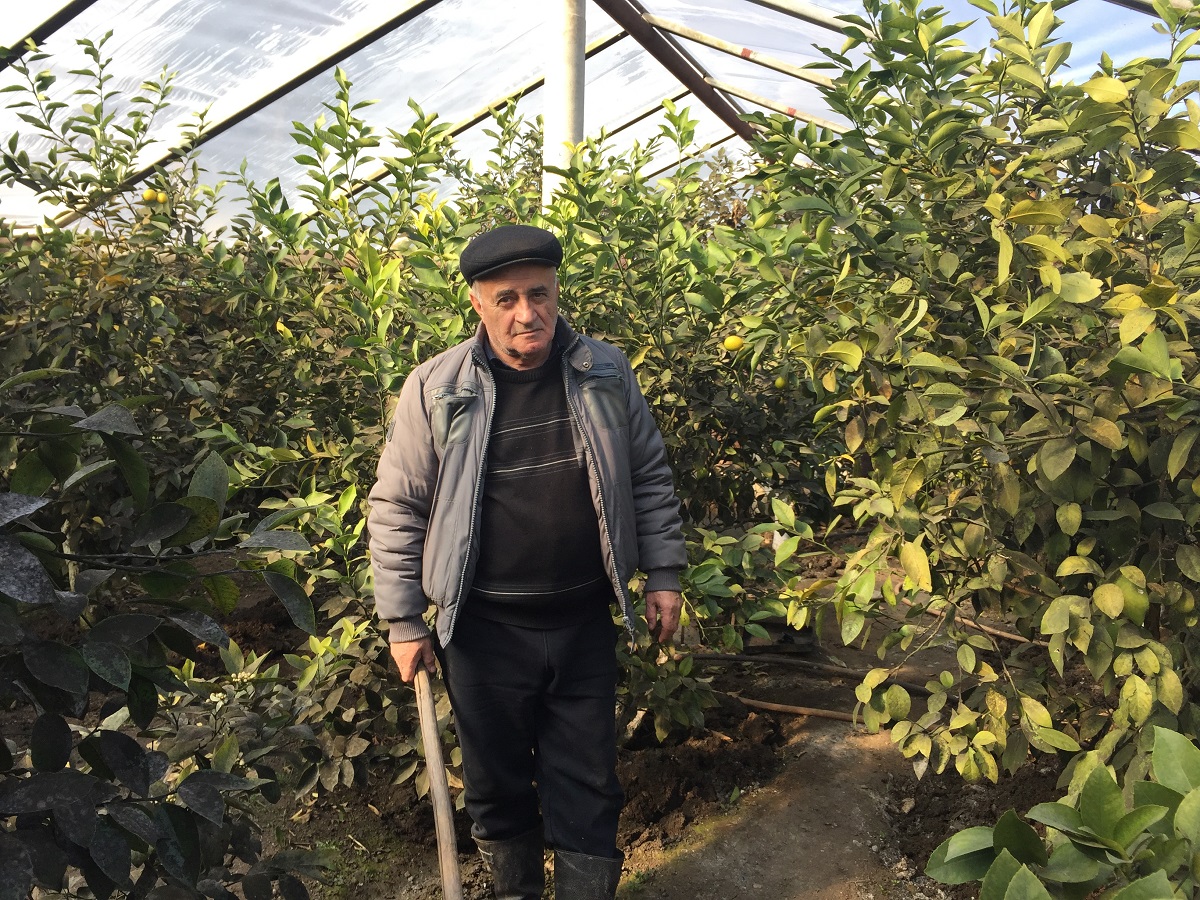 “There are financial difficulties. It’s not so easy, but I want to take on this business. In the new greenhouse, I’ll have about 200-300 trees. This year we have been heating our greenhouse for just a month – and heating is expensive. If they bring gas to the village, it will be a completely different story,” says Harutyunyan.

Making a living here is not easy. People take out loans from banks in order to move their businesses forward, but then they find themselves in an even more difficult situation – they cannot pay back the interest. 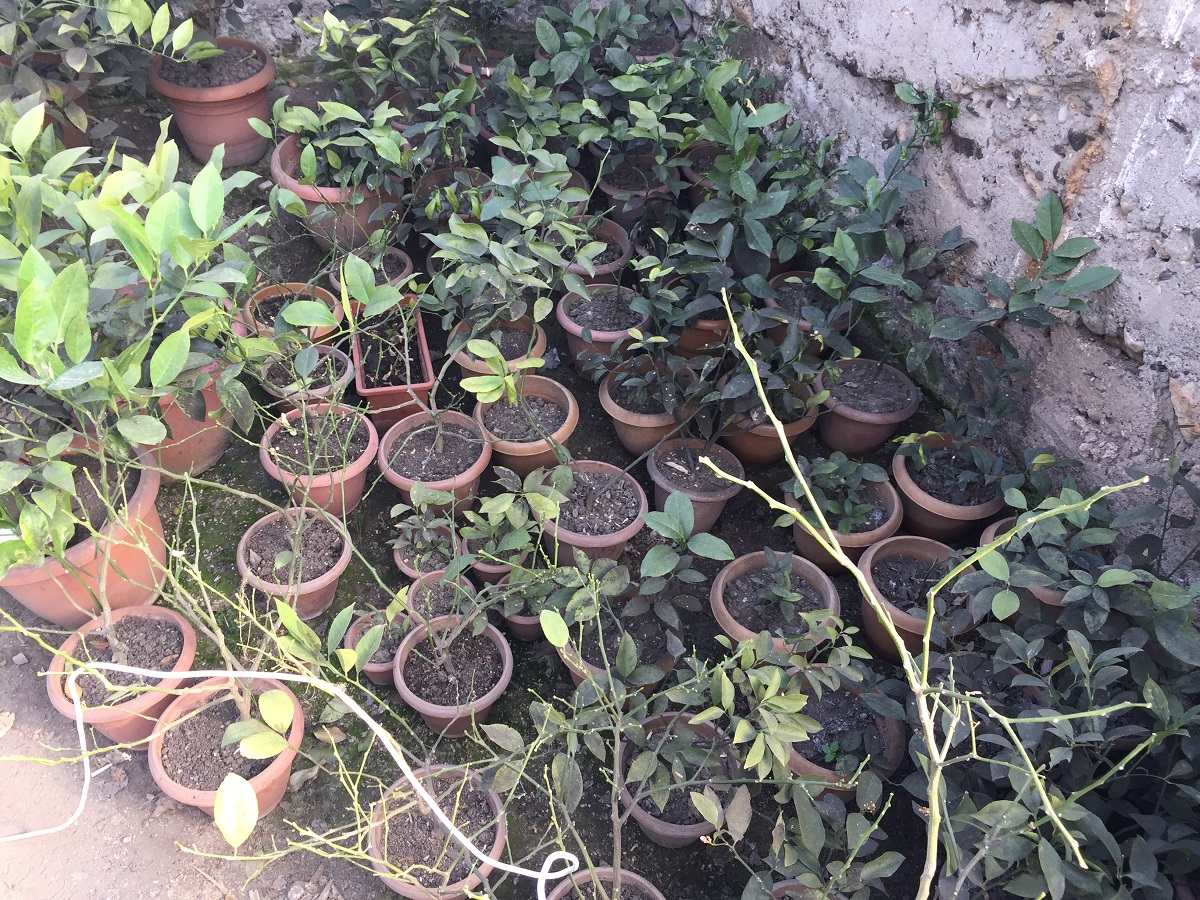 Suren Khudaverdyan says that he took a loan of 3 million drams (more than 6 thousand dollars) to heat his greenhouse, thanks to which he was able to harvest in winter. However, he didn’t have the funds to purchase enough firewood. After January, it was impossible to heat the greenhouse, and all the seedlings died due to frost.

Suren Khudaverdyan says that the village doesn’t need much in order to get on its feet. He thinks the state should pay more attention to border villages:

“We need the state to help us. They must step up. A programme should be set up to attract investors who will want to try and make a factory here. They would be exempt from taxes because Berkaber is a border village,” Khudaverdyan says.

In addition, the state has exempted residents of border villages from paying land tax. But this is not essential for Berkaberyans, since most of their land is no longer theirs. Residents of Berkaber could, in theory, enjoy cheaper gas prices – if they had access to gas. 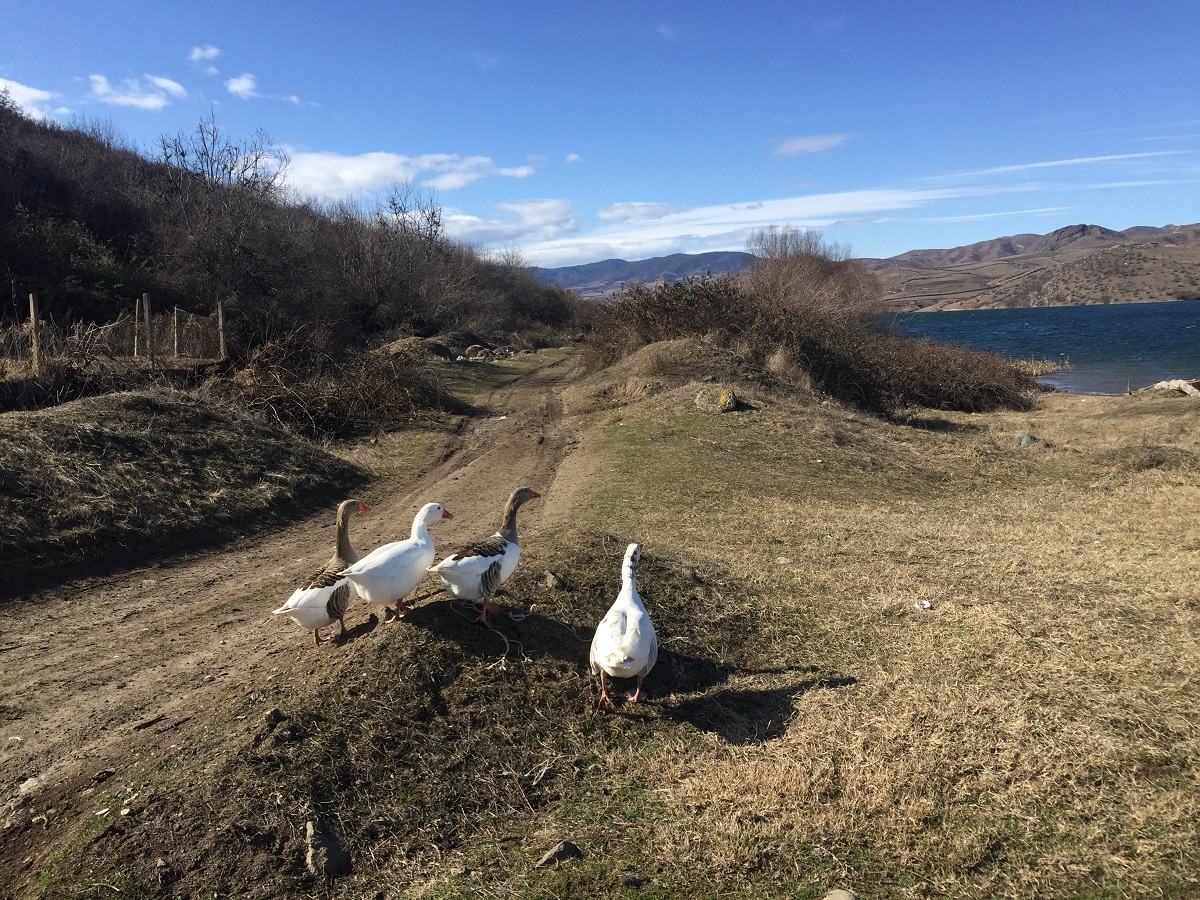 Berkaber does, however, benefit from cheaper electricity prices. Therefore, Robert Khudaverdyan says, new life could be breathed into the village if enterprises were to be introduced, be they funded by the state or private sector.

“Even if there was just a small factory, people would start working. Nothing more is needed, the people would heal.”

Several small industries in the village are working now. The public organization Sahman helped them get a start, and the Armenian diaspora helps to keep them afloat.

Not waiting for outside help

Armine Eganyan and a number of other women founded a business four years ago. They knit eco-toys from environmentally friendly yarn. They came up with the name Berkaber Toys. Most orders are from the USA. 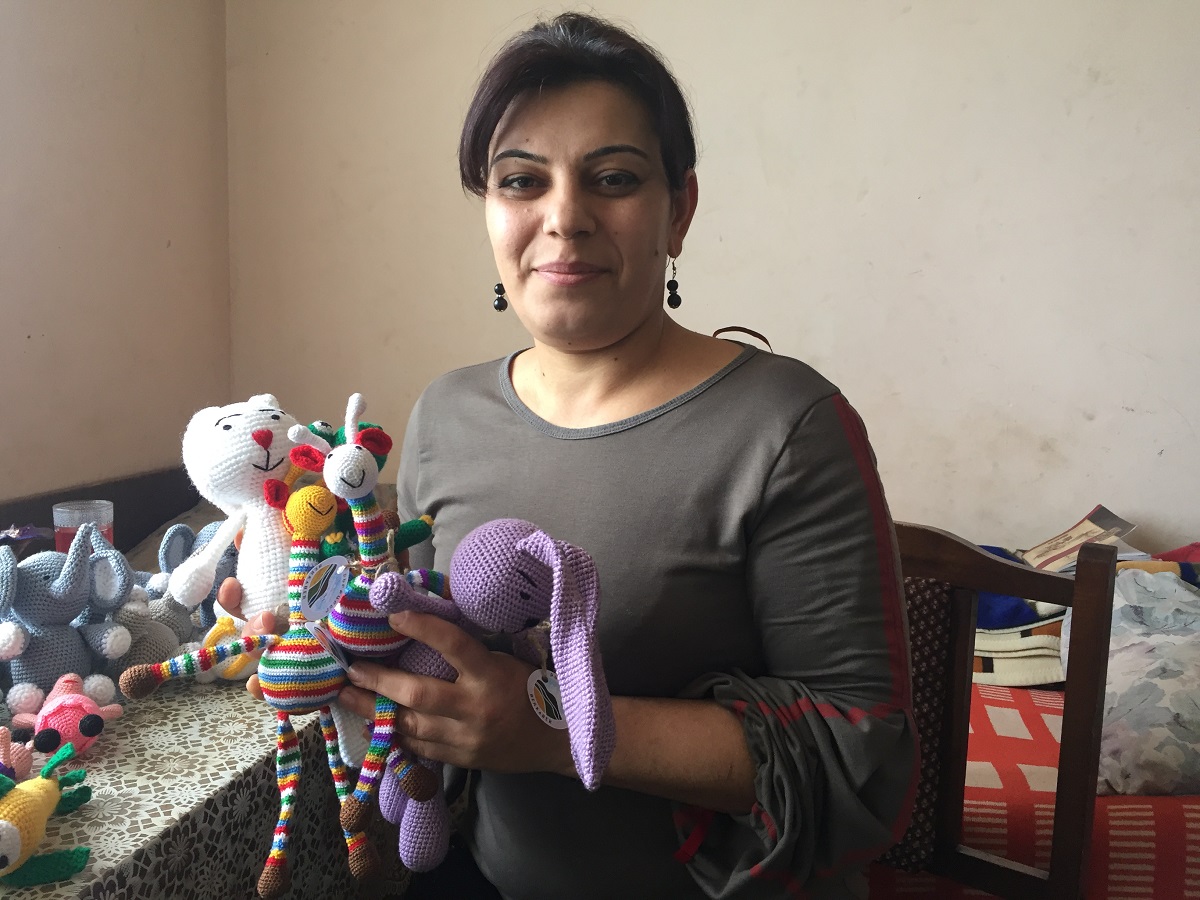 “We receive orders from different countries. Most orders are online, and in the summer tourists come to the village to buy. I draw sketches. We knit dogs, elephants, giraffes, bunnies and pandas. Our best workers manage to knit one toy a day. For one toy we get 2,000 drams (4 dollars). On average, I earn up to 50 thousand ($103) a month,” says Armine.

Ara Khudaverdyan annually harvests 20-30 tonnes of persimmon. He has a large garden on the banks of the Joghaz reservoir.

“After the war, people were afraid to invest in something on the border because they thought they would lose everything. They saw no future here. But our generation has broken these stereotypes. There are many young people in the village who have started their own business. I get about five tonnes of organic dried fruit from 30 tonnes of persimmon. For two years I have been engaged in the dried fruit business,” says Ara Khudaverdian.

He says he started the business after receiving a grant. Later he participated in various international exhibitions and presented his products in Dubai and London:

“There are interested people and there are orders. The only problem is that there are few organic dried fruits in Armenia, and customers want to buy in large volumes. There is a demand, and this means that it is necessary to develop organic agriculture in Armenia.”

Berkaber’s geographical position is peculiar: towering heights and precipices, picturesque gorges, the Joghaz reservoir – all this makes quite an impression on tourists. In recent years, residents of other regions of Armenia have started to visit the village regularly. 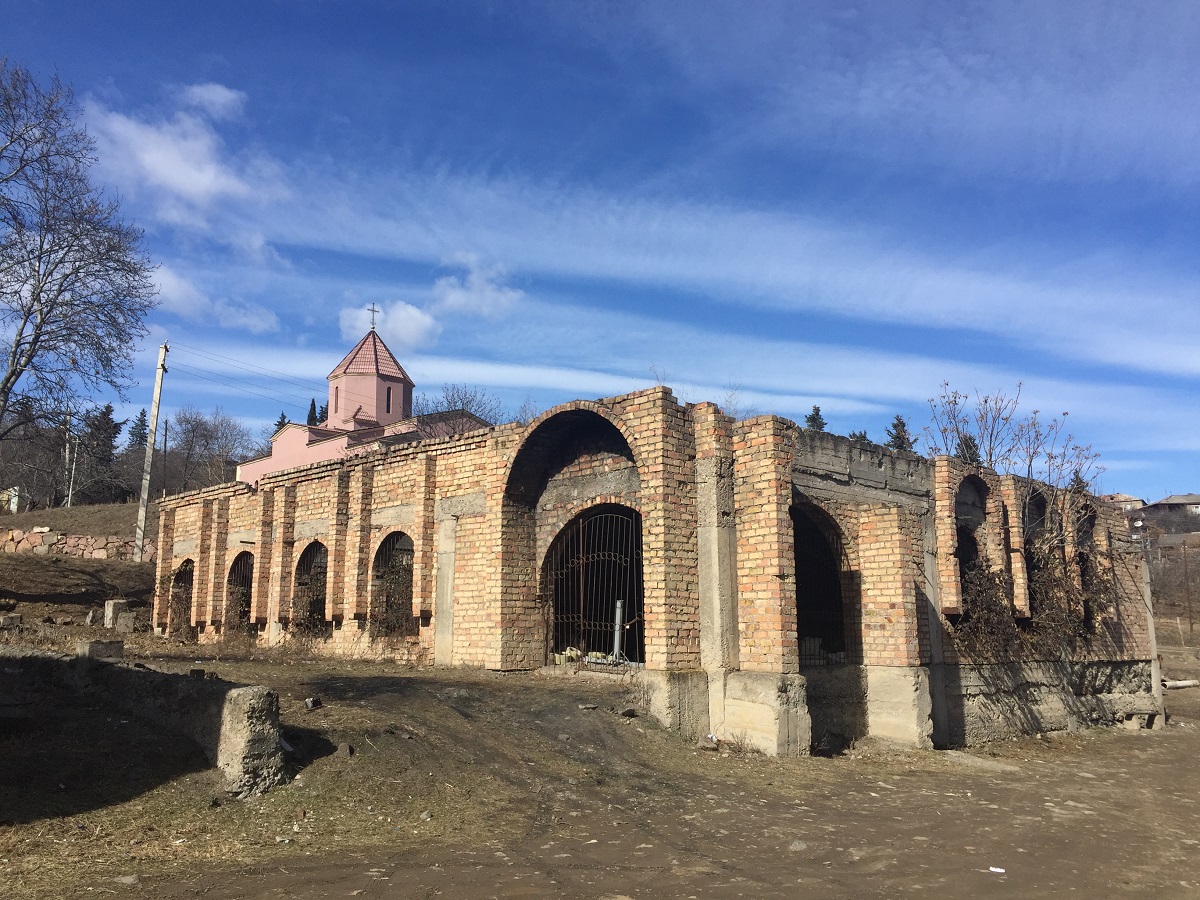 Elder Argam Arzumanyan says that the village hopes to develop its tourism sector even further:

“At first, I did not believe that  it was possible to develop tourism in our situation, but now I understand that it is possible. There is very beautiful nature, unique air, water, and a sense of peace. Extreme Cafe can also be one of the incentives for tourists to come visit. The cafe is built right on a hill – from the windows you can see Azerbaijani villages, the Joghaz reservoir and the combat posts of the Azerbaijani armed forces.” 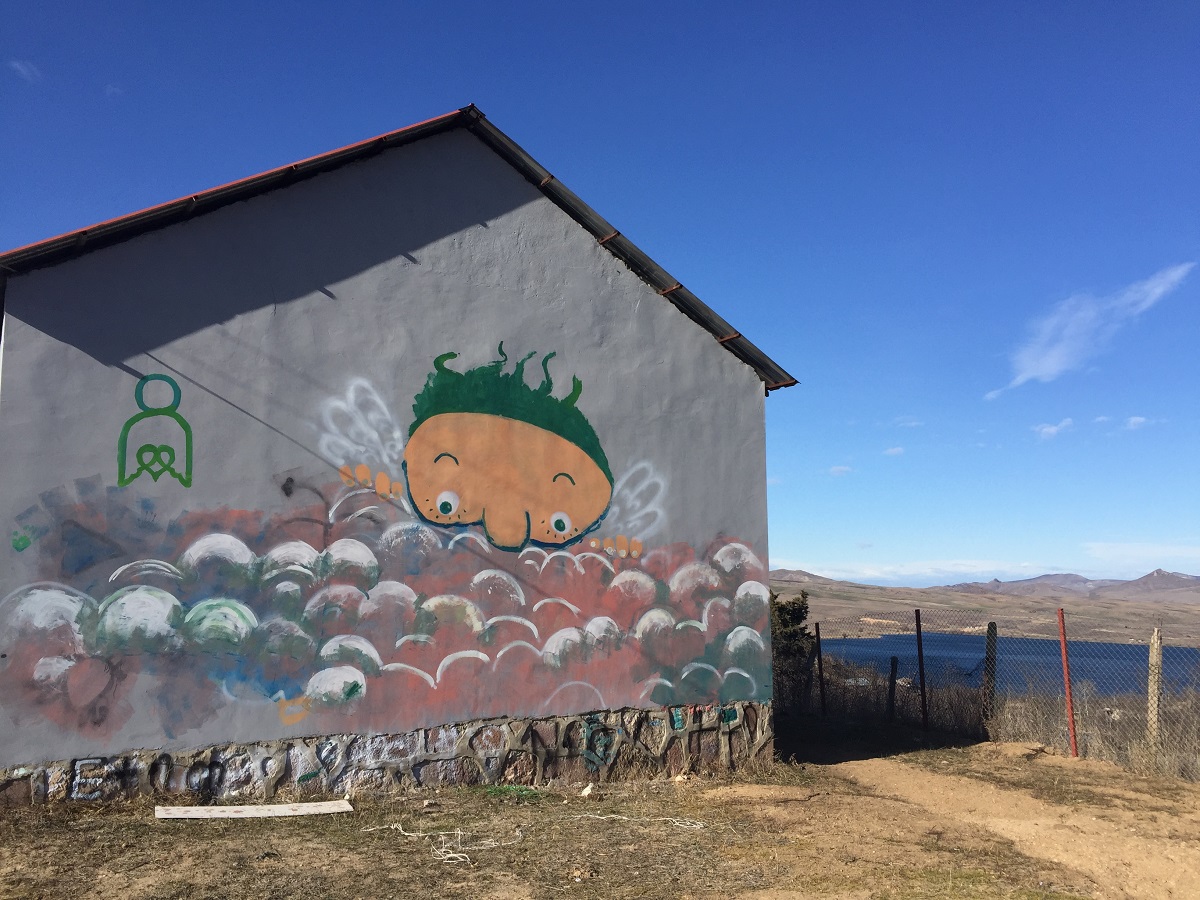 “At the moment they are renovating the place, but by the summer the cafe will be ready. Tourists will be able to enjoy a cup of coffee just 500 metres from Azerbaijani military positions, and for the Berkaberians themselves, the cafe is a symbol of the fact that life goes on, even though the conflict has not yet been resolved.”

Nursing homes in Georgia – both shunned and in critical demand

How have Armenian villages ended up in Azerbaijan?