On May 9, Azerbaijan marks the Day of Victory over Fascism. This is certainly the day of disputes on whether it is ‘our’ holiday and how it should be perceived. For someone it’s the day of mourning for the victims, whom the republic sacrificed at the altar of the imposed war. For others it’s a celebration of the triumph of good over evil. Anyway, each Azerbaijani family has its own story about the WWII. And if it turned out to be the story with the happy ending and the soldier returned home – his grandchildren cherish his stories to further pass them to their children. 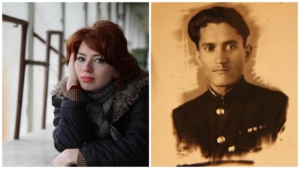 Natalia and her veteran grandfather Leonid Abdullayev, 1924
My grandfather departed for the front at the age of 16.  He had to do it secretly, because underaged persons were not recruited.

His first impressions of the war:  a column of tanks and trucks, whose rhythmic movement and constant crunching was subtly audible the whole time.  “At first I thought it was the soil, my grandfather used to tell.  “But then I saw that the vehicles were driving over corpses.  There were bones and faces being crunched under the wheels and just walking on the the ground make your boots brown and sticky with blood.  “It’s scary, isn’t it? I asked him.  “At first you’re scared and then you get used to it so quickly that you don’t even notice it.

Before being transferred to artillery, my grandpa was appointed the commander of a penal battalion.  His ‘team’ was divided into two groups: the inveterate criminals, as was the jargon for them and exiled political prisoners, citing Pliny the Elder in our conversations.

Naturally, the situation was tense.  However everyone loved my grandfather, a 17-year-old boy then, whom they called “Sonny.  They did their best to take care of him.  Then, a shell exploded over his head; he was wounded and shell-shocked.  It was dangerous to take him to a hospital, since all the roads were under fire.  Then the penal battalion claimed it would nurse ‘Sonny’ back to health itself and would not let him be taken anywhere.

There was no skirmishes within the battalion while he was ill.

He participated in the occupation of Vienna and Budapest.  He never told me about the battles, but was always recalling how lovely and beautiful Vienna was and that he was really lucky to have been there.  He would tell me about the Soviet soldiers, who already had good rations at those times and who shared them with the starving women and children in the villages and city suburbs.

Almost all of his fellow soldiers returned home from Europe with a lot of gold.  In the occupied cities, all the jewelry shops remained open after being bombed, and the soldiers took advantage of that.  To my grandmother’s great surprise, he did not bring anything home from the war save a steel razor that he shaved himself with over the next 60 years and unbelievably thin pink paper use for letters, including monograms, with envelopes of the same size from one of the bombed-out stores. When asked why he had act this way, he replied, ‘They things are beautiful, aren’t they?’

“For me there’s just one–that’s May 9, my grandpa used to say.  “It’s my birthday, my New Year’s Eve, everything.

My grandfather taught me how to ride a bike, running after me in a dash, holding onto the seat.  We used to play football, volleyball and all those games for boys that I loved.  And he also taught me how to fix outlets and vacuum cleaners. 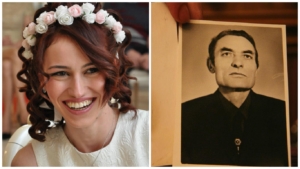 I have never seen my grandfather, but I listened to my mom’s stories about him and spared no efforts to find out information about the places he had served.

He was from the Cherny Yar village, in the Astrakhan region.  They had just one cow in a family of six, but they were still regarded as ‘kulaks’ and were exiled to Kazakhstan.  This happened in 1923.  My grandpa’s younger sister, who was 4 at the time, died on the way there and was buried along the road.  After living in Kazakhstan the family returned to Cherny Yar.  He was conscripted for military service in 1939.  He went straight to the Finnish war and then, in 1941, was relocated to the front.  He was a machine gunner; he served in the 201st anti-infantry regiment.  He was captured in July of 1941.  A bomb exploded close to him, he was wounded, he could neither see nor hear anything, and that’s how he was taken captive.

He never told my mom about the war or his captivity either, but from the fragments of conversations with the conclusion was reached that he was incarcerated in a concentration camp in Salaspils, in the Baltics.  Not only was he imprisoned there, but he also took part in its construction.  There was a Polish woman who saved him from the gas chamber.  My grandpa never told us anything about her, but he carried her photo with him throughout the war and kept it until his death.  We have been long trying to find out the name of that cheerful blond woman in the photo, who saved my grandpa, but so far it has been in vain.

All former prisoners of war faced exile to Siberia, but my grandfather was lucky.  The NKVD (the People’s Commissariat for Internal Affairs) officer, who dealt with his case, was probably a kind man.  He didn’t send him to exile.  Moreover, he most likely destroyed all his documents. I appealed and sent letters to different everyone I could, even making a query for the Russian Defence Ministry’s archive, but I couldn’t find anything. It seems that this man simply did not exist.

He never told anything us anything about the front or captivity.  He only shared it with his brother, instructing him to keep everything a secret.  His brother kept his promise, until his death in 1962. 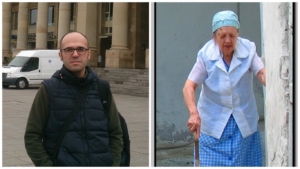 She was born in Tatarsk (in the Novosibirsk Oblast province).  She was going to become a ballet dancer after graduating school, but the war broke out a few days after the graduation party.  Naturally, like everyone else, the young lady, Tamara, went to war.

So skip forwards, the war was finished, and the time came to return home.  I don’t know why geographically speaking, but she had to return via Baku.  So, she and one girl got out of the train with their luggage, at our capital’s railway station, and stayed in the waiting room ready to take the morning train that would take them far, far away.  Tamara Voronina fell asleep in the waiting room, and I don’t know what her dreams were about.  But what I know for sure is that her companion did not get any slumber.  What happened was, when Tamara woke up, her companion and luggage was gone.

Her documents and tickets were among the things stolen. So, there was Tamara Voronina, alone in a strange city.  What was she supposed to do?

I don’t know all the details, but Tamara started working at several locations to earn a living.  One of these places was a home for the disabled.

Among her, so to say, patients was one whom she nursed in a particularly loving way.  Some time later Tamara found out that she was pregnant. The patient did not weasel out and asked for her hand in marriage.

He was an Azerbaijani and his family was very much against it, but the man was persistent and they got married.  Two sons came from this marriage.  After a while, Tamara Alexandrovna’s husband became blind and she has had to raise the children and take care of her husband single-handedly.

Eventually, her husband died.  Then, her children grew up and created their own families.

She was alive until not too long ago–she died 4 months before she was going to turn 90.  She also lost her eyesight, but she moved around by touch and even did the laundry.  The only thing she could not do herself was to pour tea and put food on a plate.  Every morning she urged herself to get up, make her bed and go out of the bedroom.

She used to say: ‘The most important thing is to never stop…’ 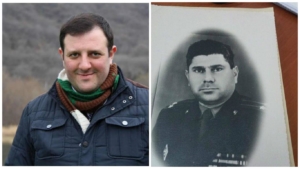 My grandfather went to the army in August 1941, right after graduating from medical school.  He participated in defending Moscow; he took over for a killed commander in one of the battles and led a battalion in the attack. He was just a military doctor.  He was awarded the Order of the Red Banner for his initiative and courage.

Then, his battalion entrenched on Kryukov village, not far from Rostov.  A fierce battle was expected in the other direction, so the situation was relatively calm there. The battalion commander, accompanied by a detached unit, went to meet a food cart, as well as a few more battalions that were to join Gadamshah’s battalion for the offensive.  But the detached unit was attacked and defeated by the Germans, after which they headed towards Kryukov.

Gadamshah assumed command.  But there were just a few people left.  There was also a folk musical instruments’ museum in Kryukov.  So, when the Germans approached, he lined up the soldiers and ordered part of the battalion to advance directly upon the Germans.  They took all the musical instruments and started playing and singing, making as much noise as they could.  They played some ethnic flutes and the sound they made was very loud and strange.The Germans were befuddled.  While they were trying to figure out what was going on, the second part of the detached unit approached from the rear and attacked the Germans.

In 1943, when my grandfather was just 22 years old, he became a Major. Then he got shell-shock, one serious and one light wound.  In short, he experienced it all.  He aslo got a lot of medals for his heroic deeds.

I did not know him myself.  My grandfather died in 1966, but my father told me about him.  He said my grandfather slept little and read a lot; he taught at the Medical University and while doing that also wrote philosophical books and poems.  He was said to be friendly and hospitable.

He lived a short life – just 45 years. The most important that I’ve inherited from my grandfather are his poems, his newspaper articles and essays. The last of which is dated 1965, 15 years before I was born.