As promised last evening, the prime minister commented on the situation in the country’s judicial system:

“The people perceive the judiciary as a remnant of the formerly corrupted system, where conspiracies against people were constantly developed and carried out … Obviously, the public does not trust the court decisions. And I say this not only as the Prime Minister, but also as a representative of the Armenian people, who has the right to speak on its behalf …”

Pashinyan said that the government will take effective steps to improve the judicial system. If it is necessary to make changes to the constitution, they will be made. If a referendum needs to be held, it will be held.

The prime minister outlined the points for further actions that will allow for a truly independent, rather than a “puppet” judicial system:

After the speech, Pashinyan urged his supporters to unblock the entrances to the courts.

The PM also touched on the situation in Karabakh.

The situation with the blocking of courts and the decision to urgently reform the justice system is connected to the case of ex-President Robert Kocharyan, whom the court released on bail on May 16.

Judge David Grigoryan, taking this decision, took into account the guarantee of the current and former presidents of Nagorno-Karabakh. They appealed to the court with a request to release their “friend, countryman, as well as the first president of Karabakh.”

Meanwhile, the Pashinyan government considers one of its main achievements that Kocharyan and some other high-ranking officials are being prosecuted. The prime minister said this during a press conference summarizing the year of his work as head of state.

• 100 facts about the new Armenia from the Prime Minister

The court recently decided to release ex-President Kocharyan on bail, however the criminal case against him for his complicity in the events of 1 March 2008 will continue.

However, in his statement, Pashinyan called on the people of Karabakh to reject “forces whose activities are aimed at sowing discord and contradictions between the two parts of our people. All other forces clearly have one goal: to use the people of Karabakh to serve their intra-group interests, in order to avoid responsibility for past crimes, provoking conspiracies against the sovereignty of Armenia and Karabakh. ”

Reaction to the PM’s summons

The Supreme Judicial Council, the Chamber of Lawyers, the Ombudsman, the Dashnaktsutyun Party and the Prosperous Armenia Party, the parliamentary faction Bright Armenia, called upon the Prime Minister to reconsider his decision.

In particular, the ombudsman’s statement says: in Armenia any interference in the work of the courts and in justice is prohibited, the current situation may be dangerous to the security and stability of the legal system.

Political parties considered Pashinyan’s actions an attempt to put pressure on the courts.

The Catholicos of All Armenians made a call to the people to show restraint and prevent violence.

Chairman of the Court of General Jurisdiction Ruben Vardanyan, the first of the judges, said in an interview with the Armenian media:

“I officially declare: no matter what decision Prime Minister Nikol Pashinyan makes, I am ready, if necessary, to submit a resignation letter. Moreover, after being dismissed, I am ready to transfer my professional knowledge and help the formation of a new judicial system.” 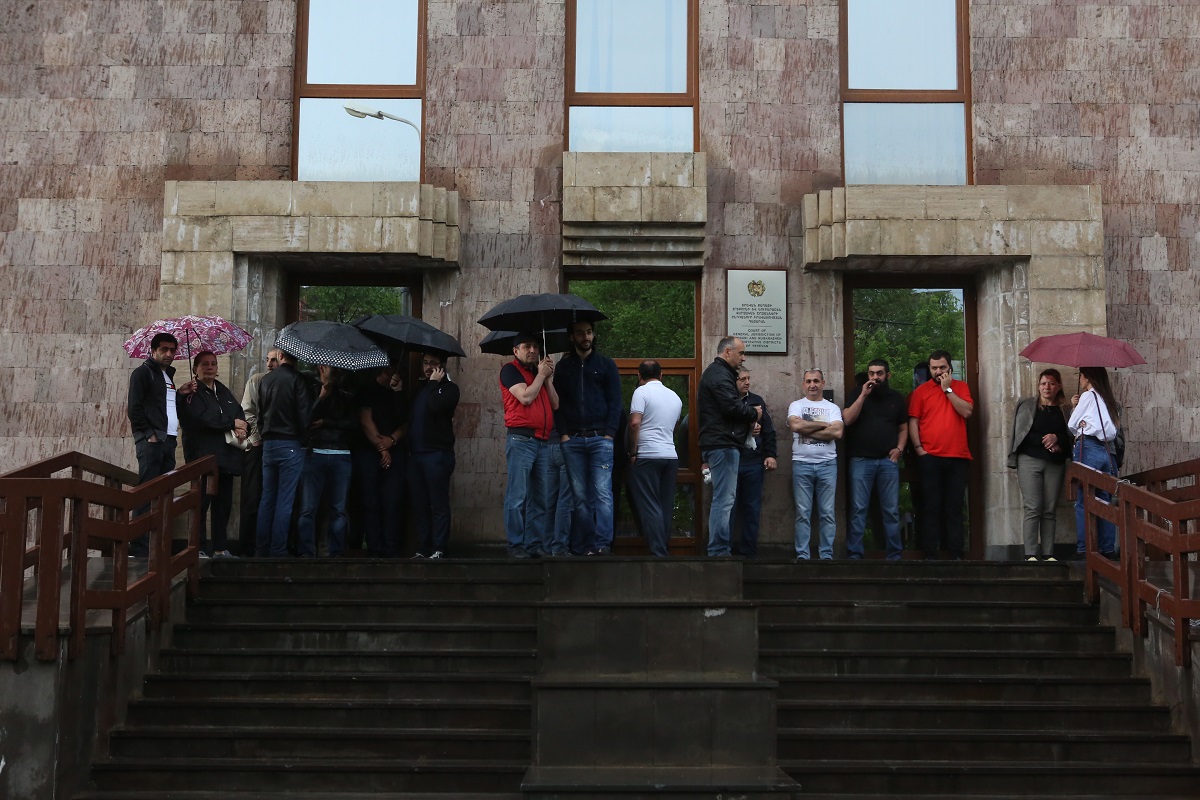 Armenian Prime Minister Nikol Pashinyan called on the public to block all public court buildings in Armenia on his Facebook page yesterday on May 19.

“Starting at 8:30 am [May 20, 2019] we block the exits and entrances to any and all court buildings in the republic so that no one enters inside.

Pashinyan in a live stream spoke about the upcoming demonstration but called on the public to exercise restraint.

Pashinyan did not name specific goals for the demonstration, but said he is relying on the public’s support.

• 100 facts about the new Armenia from the Prime Minister

In his speech, the prime minister touched on the people’s dissatisfaction with the judicial system in the country.

This refers to the demonstrations that took place in Yerevan on Saturday, May 18, held by the opponents of the release of the former president of Armenia, Robert Kocharyan.

On May 18, the court announced its decision to release Kocharyan on bail. He had been in police custody for five months for ‘overthrowing the constitutional order’, as well as receiving a $3 million bribe.

The current and former presidents of Nagorno-Karabakh presented themselves as guarantors of Kocharyan’s bail, and they each paid 500,000 AMD [approximately $1,000].

Robert Kocharyan is a native of Karabakh and was its first president, which explains why the Karabakh leaders vouched for him.

Kocharyan stands accused for his complicity in the events of 1 March 2008, when 10 people were killed as a result of military grade weaponry being used to disperse demonstrators protesting the results of recent presidential elections. Two of those killed were law enforcement officers.

The demonstrators said that the first president of Armenia Levon Ter-Petrosyan had won the elections, and demanded a recount of the vote. However, the Central Election Commission announced Serzh Sargsyan the victor.

Kocharyan was president of Armenia at the time.

The investigation of the 1 March case remained at a standstill up until the Velvet Revolution, after which the new government, with Pashinyan at its helm, took up and revived the case.

From that day on, the second Kocharyan was in prison until his recent release.

Human rights activists believe that the authorities were forced to take this step under the pressure of international organizations.

The president pipes up

After Pashinyan’s address, a message to the residents of the country appeared on the website of the President of Armenia:

“The fact that democratic processes in the Republic of Armenia are irreversible should not be in doubt either in Armenia or outside its borders.

“According to the constitution of Armenia, power belongs to the people. Therefore, the branches of government – legislative, executive and judicial – should reflect the collective will of the people of Armenia …

“In this regard, I urge all citizens of Armenia, regardless of their social and political position, to remain calm and tolerant.” 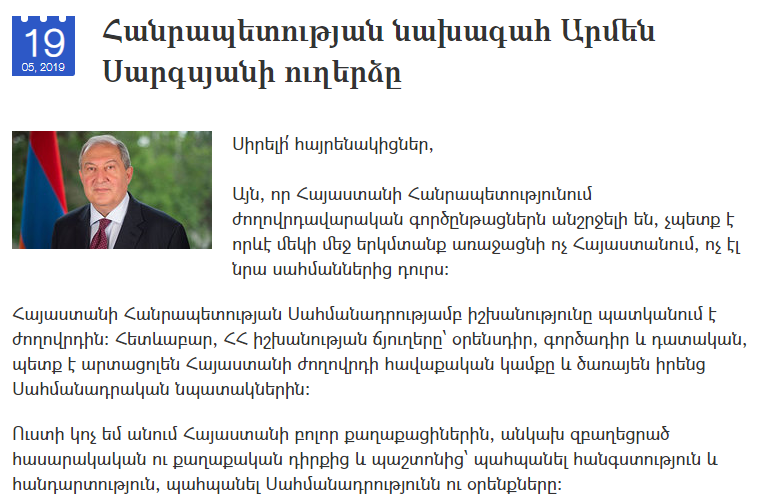