A similar ruling was passed down on September 17, when Danibekyan ruled that Kocharyan, accused of “overthrowing the constitutional order” for the events of March 1, 2008, would remain in prison.

The previous court decision was made regarding the petition of lawyers after the decision of the Constitutional Court of Armenia, which recognized the unconstitutionality of one of the articles on which the ex-president is accused. All details below

Immediately after the ruling, Kocharyan’s lawyers appealed for their client to be let out on bail.

Danibekyan will announce her ruling on September 20.

This is not the first decision regarding the arrest and release of ex-president Kocharyan. The last time he was arrested was on June 25.

Kocharyan stands accused of “overthrowing the constitutional order” in the March 1, 2008 case.

More specifically: 10 people died during the dispersal of mass demonstrations in Yerevan after the presidential election of February 2008. The president at that time was still Robert Kocharyan, even though Serzh Sargsyan had been announced the victor in the election by Central Election Commission.

After the Velvet Revolution of spring 2018, the new Armenian government resumed the investigation of those events, and Kocharyan was one of the first accused. Over the past year he has been arrested several times and released again.

On September 12, Kocharyan’s lawyers submitted a motion to change the preventive measure against the former head of state.

The basis for this was the verdict of the Constitutional Court, which ruled that Article 35 (which mentions the admissibility of the criminal prosecution of an ex president) violates Article 27, which guarantees ‘personal freedom’ to all former presidents.

Kocharyan’s lawyers said that on the basis of this decision, the ex-president should be immediately released. The public prosecutors disagree.

The defence’s appeal for bail

After the court decision was announced on September 17, Kocharyan’s lawyers said there was no reason for Kocharyan to remain under arrest.

The main justification being: throughout the entire investigation, ex-president Kocharyan has never interfered with the case, and has not evaded participation in the trial or investigation.

His lawyers suggested the court give Kocharyan bail, noting that Kocharyan’s property and members of his family are under arrest, but that his relatives are willing to pay an amount determined by the court.

Robert Kocharyan joined in the request of his lawyers for bail.

First, the ex-president commented on speculation that he could evade the investigation:

“I’m not the kind of person to hide. If I were like that [ed. A person who would try to hide from responsibility], now Azerbaijanis would be drinking tea in Stepanakert.” 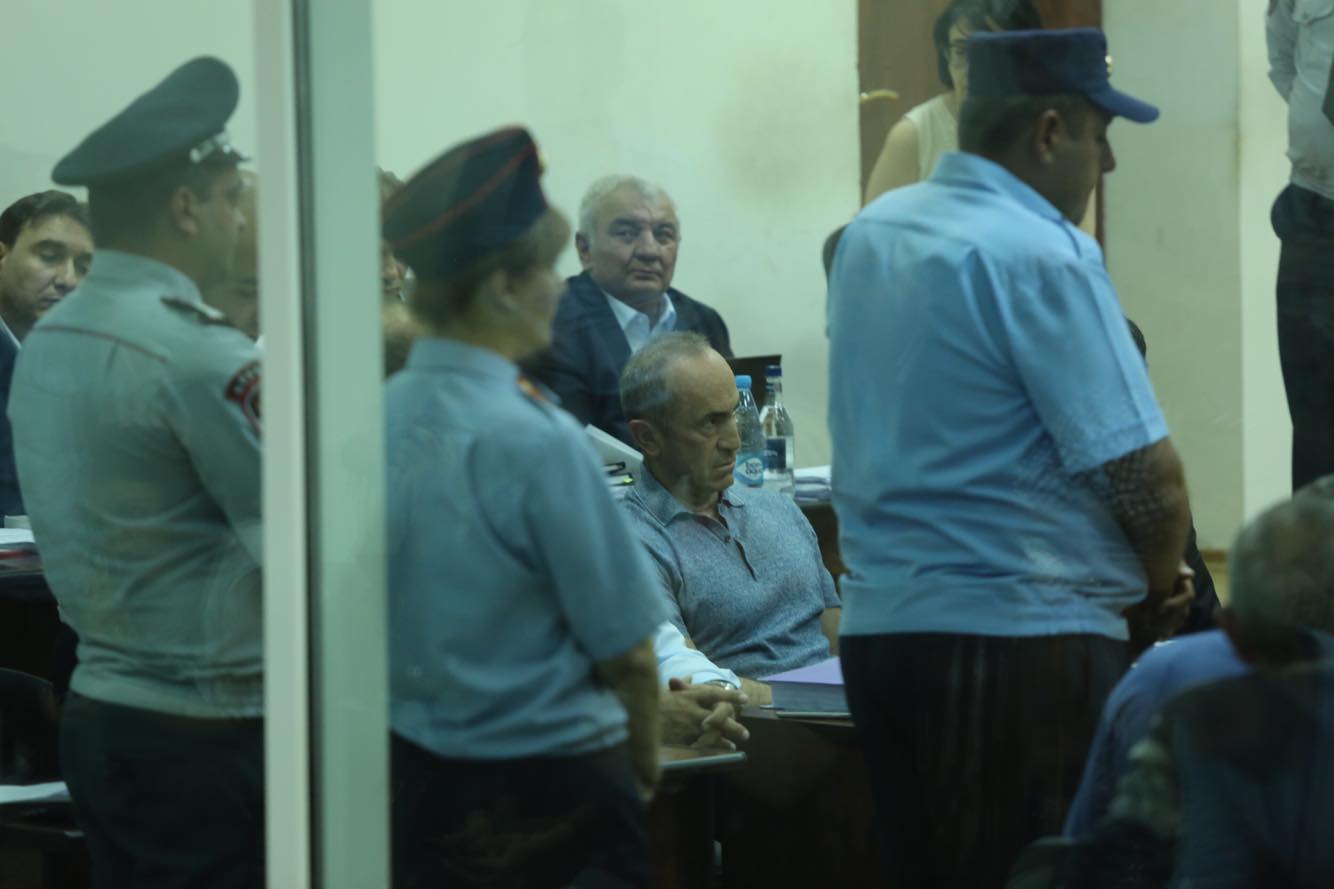 Regarding the release on bail, Kocharyan could not name the amount that he could pay and suggested that the judge herself decide it:

“It’s one thing if you remove the freeze from my accounts, another thing – if you do not remove it. I don’t know what you’ll do … The fact is that my accounts and those of my family members have been frozen. But I’ve never taken a loan in my life.”

Lawyers also said that the court’s decision was taken amid pressure from the authorities the day before it was announced.

One of Kocharyan’s lawyers recalled: earlier, the most influential officials in Armenia – the Prime Minister and the speaker – made statements about the “illegality of the Constitutional Court’s decision”, which was a clear message for Judge Anna Danibekyan presiding over this case.

“This is not the first time that, on the eve of a fateful court decision, officials intervened in the process. These statements could not but affect your decision”, emphasized lawyer Hayk Alumyan.

The Armenian PM has been paying close attention to the Kocharyan case.

During a press conference in Vanadzor on September 16, Pashinyan called the decision of the Constitutional Court illegal.

Pashinyan said the ruling was influenced by the fact that the president of the court is a member of the former ruling Republican Party of Armenia, which was evicted from power in the 2018 revolution.

Pashinyan also stated that two of the judges who made the decision are related to the March 1 case, and it is unclear why they did not recuse themselves.

In addition, the prime minister accused the Constitutional Court of being involved in a number of legal violations in the country, beginning with the presidential election, which took place in the country in 1996:

“And it seems to them that they can continue to work against the people? In the name of corruption and fraud? The National Assembly and the people should think about what to do with such a Constitutional Court”, Pashinyan said.

Parliament Speaker Ararat Mirzoyan at a meeting on September 16 stated the National Assembly is the only legal representative of the people of Armenia and that expresses its dissatisfaction with the work of the Constitutional Court:

In addition, the speaker accused the Constitutional Court of the fact that the parliament still has not received the Armenian text of the statements sent by the Venice Commission of the Council of Europe and the European Court of Human Rights. In July 2019, the Constitutional Court appealed to these European structures and asked for consultations in the case of the ex-president.

What are the accusations against Kocharyan?

Kocharyan was charged with responsibility for the 1 March 2008 case back in July 2018 for “overthrowing the constitutional order.”

Following the presidential elections of 19 February 2008, the Armenian opposition and supporters of first president Levon Ter-Petrosyan came out onto the street to protest the election results which they said had been rigged, after the Central Election Commission announced Serzh Sargsyan the victor.

During the dispersal of the demonstration, military weapons were used and 10 people were killed, including two policemen.

The president of the country at that time was Robert Kocharyan.

Up until the Velvet Revolution of 2018, the investigation of the 1 March 2008 case did not move forward.

However the new government, headed by revolutionary leader Nikol Pashinyan, immediately took up the case.

Kocharyan was first arrested on July 28 in the case – however two weeks later, he was released, as a court ruled he had immunity.

After Kocharyan’s release in August 2018, on November 15, the Court of Cassation sent the case to the Court of Appeals.

And on December 7, 2018, the appellate court decided to re-arrest the ex-president. From that day on, the second President of Armenia was again in prison until May 18, 2019.

On that day, Kocharyan was released on bail, after the current and former presidents of Nagorno Karabakh, Bako Sahakyan and Arkady Ghukasyan, vowed to act as guarantors and asked the judge to take into consideration Kocharyan’s “contribution to the formation of the two Armenian republics, his enormous contribute to the Karabakh war and the formation of the Armenian army.”

Kocharyan stands accused of one other crime.

In February 2019, Kocharyan was charged of receiving a bribe of 927 million drams [about $3 million].

Kocharyan said that the second case was initiated against him in order to seize his assets, which the first charge was unable to do.

The ex-president does not recognize any of the accusations against him and considers them a political order and vendetta of the current Armenian authorities.

Why are the events of March 1, 2008 so important for Prime Minister Pashinyan

Prime Minister Nikol Pashinyan has been an ardent oppositionist throughout his political career. In the 2008 presidential election, he represented the interests of presidential candidate Levon Ter-Petrosyan.

Pashinyan also actively participated in protests that began after the announcement of the election results. After breaking up the demonstration on March 1, he went underground for a year and four months because of allegations of rioting.

On July 1, 2010, Pashinyan voluntarily appeared at the prosecutor’s office, was arrested and sentenced to seven years.

But after a year and 11 months came under an amnesty dedicated to the 20th anniversary of the independence of Armenia.

Human rights activists believe that the country’s authorities then had to take this step under pressure from international structures.

Robert Kocharyan has openly and repeatedly stated that he is a categorical opponent of the new authorities of Armenia.

'The Future Armenian' - an action plan to rebuild the country

'The Future Armenian' - an action plan to rebuild the country