An unexpected turn of events in Abkhazia: government and opposition unite

The Abkhazian political landscape is awaiting reformation in the near future. Some leading players have serious intentions leading up to the 2019 presidential election.

The idea to approach it with a new format, where those already in power and their opposition will unite and choose a single presidential candidate, was voiced by former president of Abkhazia and now oppositionist, MP Alexander Ankvab.

“A consensus only between oppositional forces doesn’t mean an agreement will be reached in society as a whole. It will be clever and useful for everyone if the opposition and pro-government forces also come to an agreement,” Ankhab said in an interview with Abkhazia-Inform.

In his opinion, if this consensus is successful, it would be the beginning of the development of a ‘not imaginary, but real’ political culture.

In a rather lengthy interview, acting president Raul Khajimba was never mentioned. Nonetheless, based on the information that is actively being exaggerated in Sukhumi coffee houses – Alexander Ankvab intends to unite with him.

It’s known that a few days before the interview, negotiations between the two politicians had already been held, and judging by Alexander Ankvab’s tone (although he did not say a word about this meeting) it was very successful. 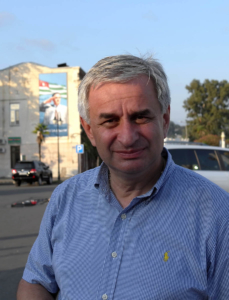 In May 2014, Raul Khajimba, who at the time headed the united opposition, forced President Alexander Ankvab to leave his seat ahead of schedule. Three months later, he himself became the head of Abkhazia.

Back then it seemed that these two politicians had forever separated as enemies. However, in the Abkhazian political environment, sometimes they can make an alliance, setting aside personal differences.

The electorate in Abkhazia is accustomed to trenches, and this rather diverse alliance may give them real motivation: to end the split in society from election to election, and to reach a public consensus. 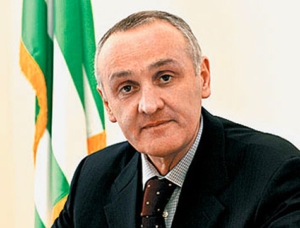 “It’s not about maintaining tranquility and stability for a certain period of time … I’m talking about how this state has become a characteristic of our society as a constant value,” Ankvab stated.

Due to age restrictions, he himself cannot run for president in the next election as he will turn 65 in December of this year. According to the law on elections, restrictions begin at this age for politicians intending to lead the republic.

However, there are plenty of other important posts in the Abkhazian column of power, and Alexander Zolotinskovich Ankhab is certainly counting on one of them if the idea he voiced succeeds.

The discourse is more about the Prime Minister’s place on the team as Raul Khajimba heads for a new presidential term. The current Prime Minister Bestan Bartsiz will be running for the position of Vice President.

Choosing most of the elective company will be the responsibility of Ankvab and is unlikely to be given to anyone else. In this interview, Alexander Ankvab openly hinted to this.

If everything is clear with the main motive of the association, if discourse is about achieving internal political stability, then by what means a new team is going to pull society from other non-political crises isn’t very clear.

“I would like to talk about reforms least of all … Because I am a realist, and well aware that the implementation of any meaningful reform requires more than political will and legislative support. Implementation of reforms is impossible without financial support … money doesn’t just appear ‘under our feet,” said Ankvab.

It’s too late to be an anti-reformer. However, he isn’t deciding himself:

However, if nothing realle changes in the approaches of management, the economy or the law enforcement system, but simply continues to follow the track already traversed for years as it is now, Ankvab seems to suggest that a new political crisis cannot be avoided since the political situation is directly related to the socio-economic situation of the state and its citizens.

The elite can agree to nominate a single presidential candidate among themselves without much resistance in order to win these elections. But further, if the problem is not solved, the consensus will quickly dissolve under the onslaught of deceived citizens. Then we will again find ourselves at a broken table.

That said, if the union between Khajimba-Ankvab, or Ankvab-Khajimba (as some want to call it) takes place, the prospect of winning the next presidential election is not as unquestionable as it may seem. Again, one of the reasons is reluctance to take any drastic steps in governance of the republic.

There is still another important aspect. Under this scheme, the opposition plus pro-authority powers may lead to other alliances arising. Politicians with serious ambitions are in abundance in the Abkhaz political environment for the 2019 elections.

Of course, they don’t have the same experience as the gray-haired Alexander Ankvab and Raul Khajimba, but there is an energy and desire to establish their own line of behavior with no regard to notorious authorities.

This younger generation can use the same scheme to unite and accompany this union with a clear plan for withdrawing the republic from a socio-economic crisis. Then, Alexander Ankvab will need to accomplish his project more than he will need to achieve ephemeral ‘political stability’.