Presidential elections in Abkhazia have been officially moved from 21 July to 25 August.

30 MPs of the Abkhaz parliament voted today on whether to move the elections to late summer – 25 voted in favour of the motion, five against. The vote took place behind closed doors.

In order for the motion to pass, 24 votes were needed.

• Has Abkhazia’s war on corruption finally taken off?

“According to the acting version of the law, it was stipulated that the elections be held no earlier than three months before the expiration of the powers of the president, and no later than two. The new version of the law says that this period is reduced to one month. The term of office of the current president expires on September 25”, Dmitry Shamba, the presidential representative in parliament, commented to journalists.

On May 22, the Abkhaz president Raul Khajimba and opposition agreed to postpone the presidential election from July 21 to August 25 after several days of protests involving thousands of people.

The opposition demanded that the presidential election be postponed to a later date, because its candidate for the presidency of Aslan Bzhania was poisoned a little over a month ago and has not recovered enough so as to be able to participate in the elections.

Aslan Bzhania has been in a serious condition in a hospital in Moscow since April 19. His breathing is disturbed and he cannot speak. A large dose of metals was found in his blood, in particular, mercury and aluminum, which doctors say could not have naturally occurred. Two days after Bzhania’s hospitalization, two of his bodyguards with similar signs of the disease were taken to the same hospital, although in less severe condition. The bodyguards were discharged from the hospital, but they continue treatment. However, it is hard to say as to when Bzhania will be able to leave hospital.

As one of the participants in the negotiations from the opposition, Teimuraz Khishba said, it is impossible to move the election date to a later date since then the election law will be violated:

“August 25 is the maximum that could be done,” he said.

Bzhania, however, is unlikely to recover by August 25. It is assumed that he will participate in elections in absentia.

Khishba says he is in constant contact with the family of the opposition leader, who says that Bzhania will recover in September. Therefore, a special clause of the agreement with the president was an agreement that Bzhania would run in absentia in the elections.

Aslan Bzhania, for whom the Abkhaz language is native, cannot fulfill any of these requirements of the law. Therefore, according to the agreement with the opposition, President Raul Khajimba will appeal to the election commission for Bzhania to count the results of a similar exam that he passed during the previous presidential elections of 2014.

President of Abkhazia Raul Khajimba has published a special appeal to the people, in which he accused the opposition of trying to seize power.

The address was a response to a protest demonstration which the united opposition announced on May 20. The protesters also say that Khajimba should resign.

The main demand of the opposition is to postpone the presidential election scheduled for July 21, 2019 until the fall.

The reason for this demand is that the candidate for the presidency from the opposition, Aslan Bzhania, was poisoned and thus is not in condition to participate in the elections as a candidate: he has been in a serious condition in the hospital for over a month.

Opposition supporters blame the current government for poisoning their leader.

“These days we have witnessed the destructive actions of the opposition forces, which, under the seeming pretext of being concerned by the health of Aslan Bzhania and his participation in the upcoming presidential election, they have in fact exposed the essence of their main intentions – the early resignation of the head of state”, said President Khajimba in his address.

He stressed that “jointly with our Russian colleagues, our law enforcement agencies are conducting a thorough investigation of the case of Bzhania’s poisoning”, and that the authorities “are taking all necessary measures to prevent provocations” and called on the people “not to succumb to provocations and show restraint and vigilance”.

On the morning of May 21, through negotiations, the Abkhaz militia managed to unblock the central highway Psou-Ingur, which was blocked at two points by opposition supporters from the previous evening.

In Abkhazia, many public transport drivers also went on strike, and the authorities are negotiating, trying to stop the strike. 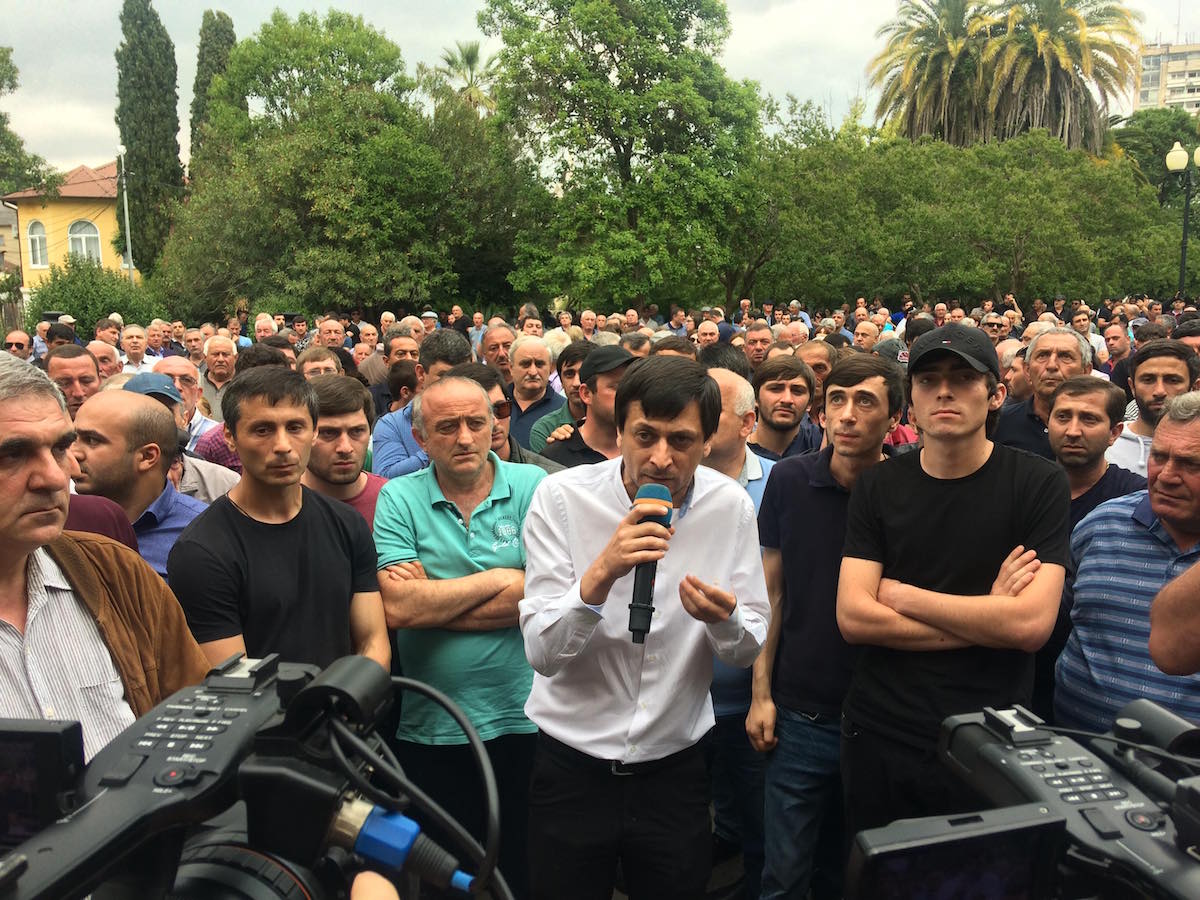 The indefinite disobedience demonstration was announced by the opposition after the Abkhaz parliament at a meeting on May 20 decided not to agree to the opposition’s proposal to postpone the presidential elections from July 21 to the end of November 2019 due to the poisoning of the opposition leader Aslan Bzhania.

The presidential election campaign season of Abkhazia officially started on May 21.

Commentary by a prominent public figure and writer Nadezhda Venediktova in Abkhazia:

“These days, the current government is loosening up what it started four years ago. Again they demand the resignation of the president, again before the start of the holiday season.

“It turns out that in five years we have not learned anything. Although after the first coup d’état, the new opposition swore that it would act only within the framework of the Constitution.

“Now imagine that Khajimba gave way to the requirements and resigned just a few months before the presidential election. The second coup in a row – does our country need such a reputation?

“Yes, the requirement to transfer the presidential election is based on a sense of justice. But the demand for the immediate resignation of the president does not meet the long-term interests of the country.

“If the election is not postponed, the reputation of the current government will be so damaged that it will completely lose its legitimacy even in the eyes of many supporters. It cannot win the election. Yes, it is difficult to stop in the midst of the rally of fever, but it must be done to strengthen the Constitution and the rule of law. He who knows how to keep his horse at a trot demonstrates higher class than one who rushes headlong.”

A week after the start of the war. Baku in video and photos