– What is Europe? What is the European Union?

– The European Union is a democracy.

– It also implies well-being and the protection of human rights.

– Which part of Europe is well-off? And if we identify Europe with well-being, then which part of the European continent is Europe for us? Do we regard Slovakia, Croatia and Romania as Europe, or is it only France, Germany and Italy?

– I would say that Europe is ‘diversity in unity’.

T his kind of ‘brainstorming’ could be observed during the events that are referred to as the ‘tea party’ at the Caucasus Institute. Here various issues are discussed, from seemingly plain to more complex and ambiguous ones.

But most importantly, all discussion themes are conflict-related: how ethnic conflicts emerge and develop, how cultures and conflicts are linked to each other and how Europe’s diversity is related to its inherent methods of conflict resolution.

Firstly, Alexander Iskandaryan, a political analyst and director of the Caucasus Institute, puts all the questions to the participants. As he gets the participants’ answers, he asks them counter-questions, that are unexpected and sharp, as if taking a blindfold off of one’s eyes. And the discussion participants, or, to be more precise, their perception of the world and their attitude towards certain issues, sort of undergoes a durability test, like in a lab. 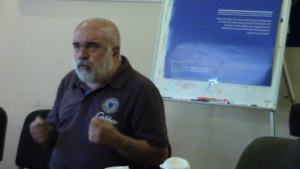 This unique format, referred to as a ‘tea party’, was developed at the Caucasus Institute. It has been supported by the British Embassy in Armenia through funding provided by the United Kingdom Conflict, Security and Stability Fund.

Young people of different majors and interests gather here after their work day. You can find students there, as well as professionals who are accomplished in their careers, including journalists, political analysts, orientalists, international experts and even art historians.

It’s very pleasant to have a cup of tea after work, whereas if you combine it with an interesting lecture, it becomes more useful.

This two-hour discussion may not break the participants’ stereotypes completely, but it surely undermines them, allowing them to face up to reality in a different way. As a permanent participant in those discussions, I can say that sometimes you are just overwhelmed by devastation, but then you feel how this vacuum is filled with new content: about conflicts, Europe, culture, etc. It’s an interesting way of relaxation after a hard day.

“We are learning and having tea,” say the participants in the evening meetings at the Caucasus Institute.
Go to top

M eanwhile, the ‘tea party’ is just part of a broader project, aimed at ‘initiating a peace dialogue around the Karabakh conflict at the community and elite level in Armenia and Karabakh. In other words, it promotes peace discussions that have become less intensive after the April hostilities in the Karabakh conflict zone in 2016, giving way to a military rhetoric.

“Some 5-7 years ago, discourses in the Armenian society about inadmissibility of concessions in the Karabakh conflict in the form of ‘not an inch of land’ were marginal (in Karabakh they have always been in the mainstream, because the situation there is different), whereas now they are voiced by the country’s top officials,” said Alexander Iskandaryan. In his opinion, under such circumstances, it’s necessary to maintain a peace dialogue and rationalize discourses.

Due to the specific nature of the problem and the acuteness of the Karabakh confrontation, the researchers and international organizations find it hard now to initiate work between Armenia and Azerbaijan, Azerbaijan and Karabakh. “It’s inefficient now. It’s a non-optimal method of work. But there is also another pressing problem, that is, perpetuation of various sentiments in the isolated communities, separately in Armenia, and separately in Karabakh. And this is reflected in the statistics,” said Nina Iskandaryan, Project Manager and the Head of Curriculum at the Caucasus Institute.

A survey was conducted to get an insight into the public’s moods.

“The public’s moods in Armenia and Karabakh are very radicalized, and the communities are more radically disposed than the elites,” says Nona Iskandaryan.

According to the survey findings, 90% of the population in Karabakh nowadays are against any form of conflict resolution that implies territorial concessions. Moreover, about 83% of those surveyed in Karabakh claim they stand ready to take arms and oppose any government that will attempt to yield even a single district to Azerbaijan.

In her words, after the escalation of the Karabakh conflict in April 2016, phobias in the community have aggravated to such an extent that even ‘racial scenarios’ have become actualized.

“The most topical among them is the one involving racial hatred, under which the two nations cannot live together because they fear each other. People are not ready at all to accept the idea of peaceful cohabitation, the idea of compromise.”

She also noted that talks about the importance of the status-quo superseded the peace dialogue in the discussions on the Karabakh issue:

“People think less about peace. The important thing for them is that few military die now in the frontline area. Talks about long-term peace have been forced out of the people’s minds. People either don’t imagine peace at all, or they perceive it as something very remote and incomprehensible. Or, in their view, peace implies a well-armed army and a strictly guarded border.”

The survey revealed differences in sentiments with regard to the establishment of peace not only among the experts, political elite and ordinary people, but also in men and women. And it turned out that women are much more radical.

According to Nina Iskandaryan, the radical mood among the female population of Armenia could be attributed to the fact that women succumb more to propaganda and emotions. Alexande Iskandaryan views it as a phenomenon rooted in the foundations of traditional communities: “In the Armenian community, women are probably more radically disposed, because they tend to fall in line with existing discussions, while men are accustomed to push through their opinion.”

“The material is being processed. It’s just the beginning of the research and it’s not finished yet. Therefore, final conclusions can’t be drawn. We haven’t proven anything yet – those are just assumptions.”

W ork with journalists and active politicians in Armenia and Karabakh is also carried out as part of the project; experts are interviewed, with unstructured (biographical) interviews and focus group discussions also held. Communication with the youth is not just limited to the tea parties in Yerevan. The discussions are also organized in Karabakh and Tavush, a border region of Armenia.

In each group the method is done in a different way: in some groups they clarify the group members’ opinions on the Karabakh conflict, in other groups they deliver certain messages about the possibility of a peace dialogue.

“For example, when discussing the Karabakh theme with journalists and editors, we propose to discuss the editorial policy with regard to this issue. It’s an incentive to think: ‘What’s my policy on the Karabakh problem?’ We ask their opinion on this issue, and we offer ideas and different approaches,” Nina Iskandaryan explained.

The collected material is being processed now and the final research is expected to be published in September. Then they plan to organize discussions within the groups they worked with at the initial stage of the project. It is also planned to publish a study on how the Karabakh problem is reflected in the political parties’ programs, including what the politicians think about it.

All that is done for the purposes of the project, that is, to support a peace dialogue on the Karabakh issue in Armenia and Nagorno-Karabakh.

I t is noteworthy that Azerbaijan isn’t implementing a similar project. Consequently, Alexander Iskandaryan believes it’s impossible to draw conclusions about the Azerbaijani community’s attitude towards the Armenians and to a peace dialogue in general.

“There is of course anti-Armenian propaganda in Azerbaijan, but we don’t know how it actually influences ordinary Azerbaijanis – there is no verified data available.” He explains his idea by providing the following example:

“In the USSR, there was also complete propaganda that one should hate the United States, listen to Kabzon and wear a pioneer tie. However, many preferred rock music, wanted to wear jeans and listen to the American Freedom Radio.”

Iskandaryan understands that it’s very hard to support a peace dialogue under such conditions, and a clear example of the aforesaid was ‘an experiment’ of Levon Ter-Petrosyan, ex-President of Armenia, currently a leader of the ‘Armenian National Congress’opposition political force:

“His party, which was promoting the idea of peace at the last parliamentary election, gained 1.5% of votes. It was a kind of referendum. The prospect of peace disappears against the background of radicalization of the rhetoric,” the expert noted with regret.

“Today, many people say: ‘Not one step back’ and ‘by force of arms’. Okay, but the problem is that this scheme requires about 100 lives per year. On the other hand, it’s impossible to live like that forever. In this regard, it’s regrettable to lose peace goal-setting in general because different opinions, pluralism and rationalising disappear along with it. Discussions become overly emotional. Much work is to be done to ensure that peace discussions remain within the society. Armenians should talk about that with each other, they should understand each other,” the political analyst believes.

According to the preliminary survey findings, the younger generation, especially in Karabakh, is nowhere near ready for progress in the peace process.

“They say they can imagine peace with the Azerbaijanis, but they honestly admit: they are not ready for that yet. Interestingly, they themselves note that their children and grandchildren will be ready for that. In other words, they realize that neighbors should live peacefully and visit each other, but they aren’t emotionally prepared for that. As for their grandchildren and children – why not. There are also people, though few, who are ready for peace right now,” says Nina Iskandaryan.

Toponyms and terminology used in the article, as well as views, opinions and strategies they contain, do not necessarily reflect the opinions of JAMnews or any employees thereof. JAMnews reserves the right to delete comments it considers to be offensive, inflammatory, threatening or otherwise ethically unacceptable.

"We can do everything" - stories of labor migrants in Abkhazia