Tbilisi may soon lose all its charm" />

Tbilisi may soon lose all its charm

Tbilisi is an ancient city with a mixture of different architectural styles, artistic tastes, geographic conditions and historical influences. These ingredients, which at times seem to be incompatible with each other, have been amassed through the centuries in order to yield a surprisingly harmonious city. 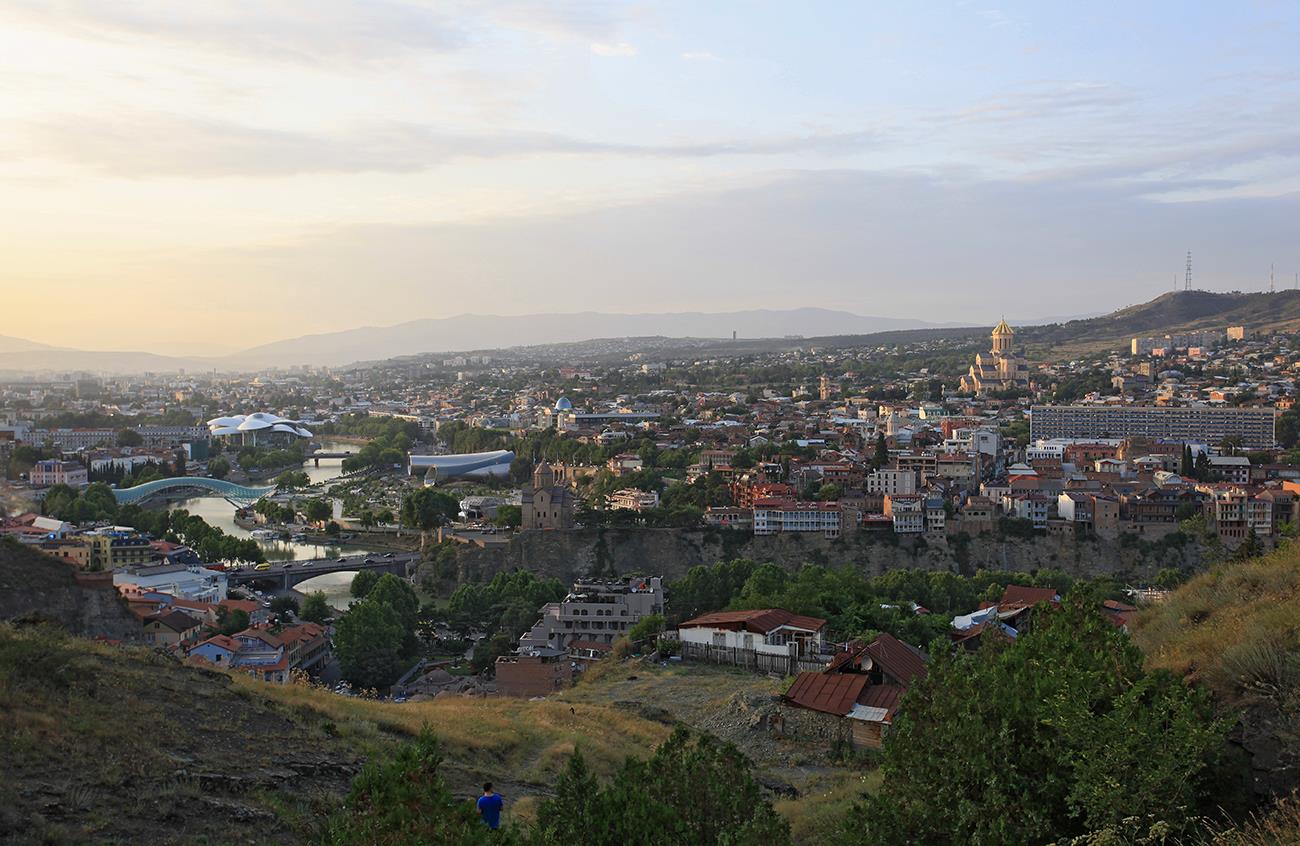 Today Tbilisi is still an attractive and remarkable city for foreigners, but the locals don’t feel the same way. The city residents are concerned about the ever-increasing and ongoing construction projects in the historic part of the city, already for two decades now. The law practically doesn’t regulate the impact the new buildings will on the image of this historic center. 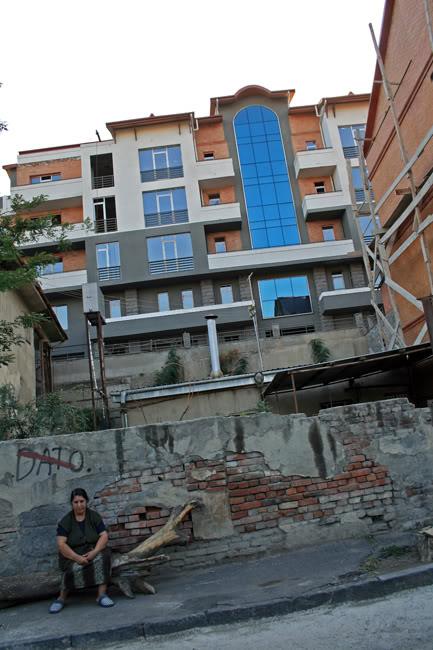 The General Layout Blueprint is the most important document for the development of any city. Best practice shows that even the slightest error in the general plan can negate all efforts made by urban specialists.

The most recent general plan in Tbilisi can be dated back to 1970. The general plan has not been officially nullified, but it has been very much neglected since 1992, when the “first portent new high-rises, appeared in the city’s historic districts. By the early 2000s, when the so-called ‘infill’ development gained momentum, builders no longer adhered to the general plan, adding additional storeys to new buildings at their own liking.

The municipality of Tbilisi’s official documents show the specific areas that need to be treated with particular caution- Sololaki, Avlabari, Chugureti and some others. These are the districts where construction is taking place (will take place), and it makes the blood of many devoted citizens run cold in regards to its historical appearance. 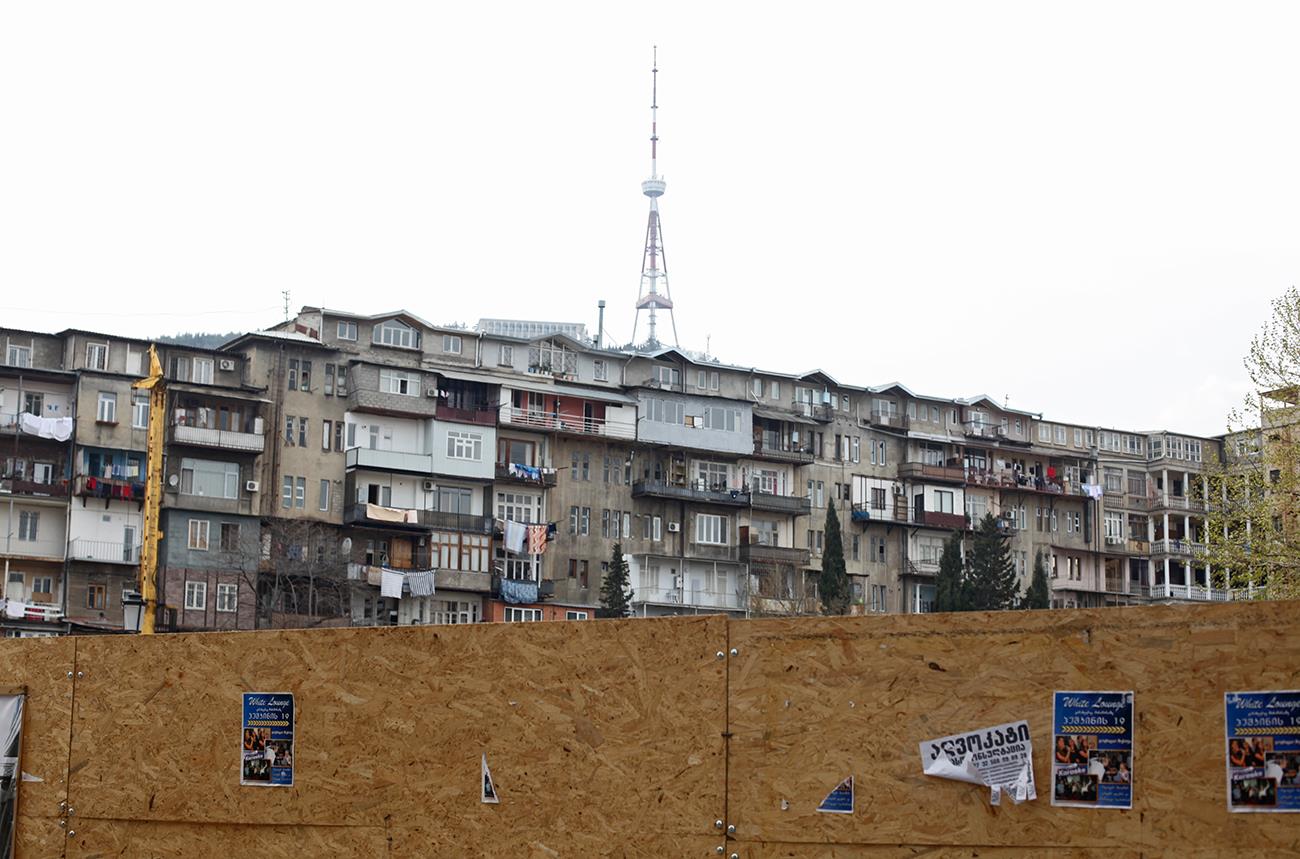 Old photos of Tbilisi can often be seen on social networks of late: typical places in the city, familiar streets and buildings, all buried in verdure. Nowadays, one can hardly find a park or a square in the central districts of Tbilisi where nothing has been built yet; one could hardly find a vacant lot, a playground, or simply a broad sidewalk, that has not been ‘consumed’ by the construction of a new multi-storey monster.

A number of Georgian media outlets have recently wrote about trees continually falling in Tbilisi. According to these publications,  they referring to the audit service data from 2009-2011, which indicates that permits were issued in Tbilisi for the cutting down of 20,690 trees. 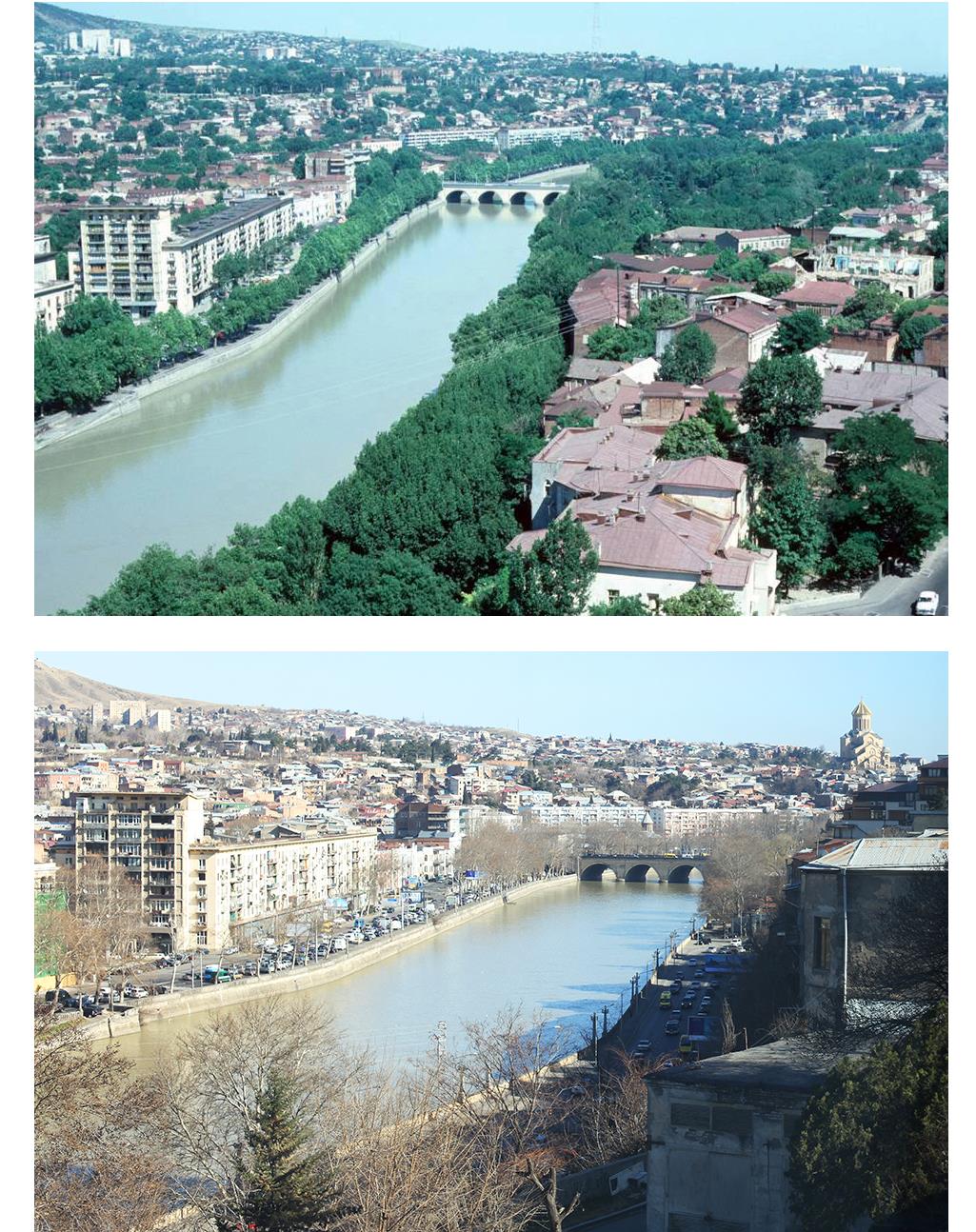 ‘Keep your hands off the historic part of the city!’, ‘Old Tbilisi is the city’s history’, ‘Don’t destroy history’, ‘It’s our City.’ With these slogans the opponents of the ‘Panorama Tbilisi’ project have hit the streets in protest. The project is to be implemented in the historic Sololaki district; it’s with good reason that it is associated with Bidzina Ivanishvili, a local rich

‘Panorama’ turned out to be so terrifying for many that it has made Tbilisi residents team up in a new civil union called ‘Together’.

‘Panorama”s opponents claim that the new architecture will have a considerable impact on the city’s landscape, but that’s still half of the trouble. The main problem is that this project can literally destroy the old center, since no mandatory construction and engineering studies have been conducted. In other words, the historical buildings will be even more damaged by the vibration generated during the construction works and by vehicular traffic. 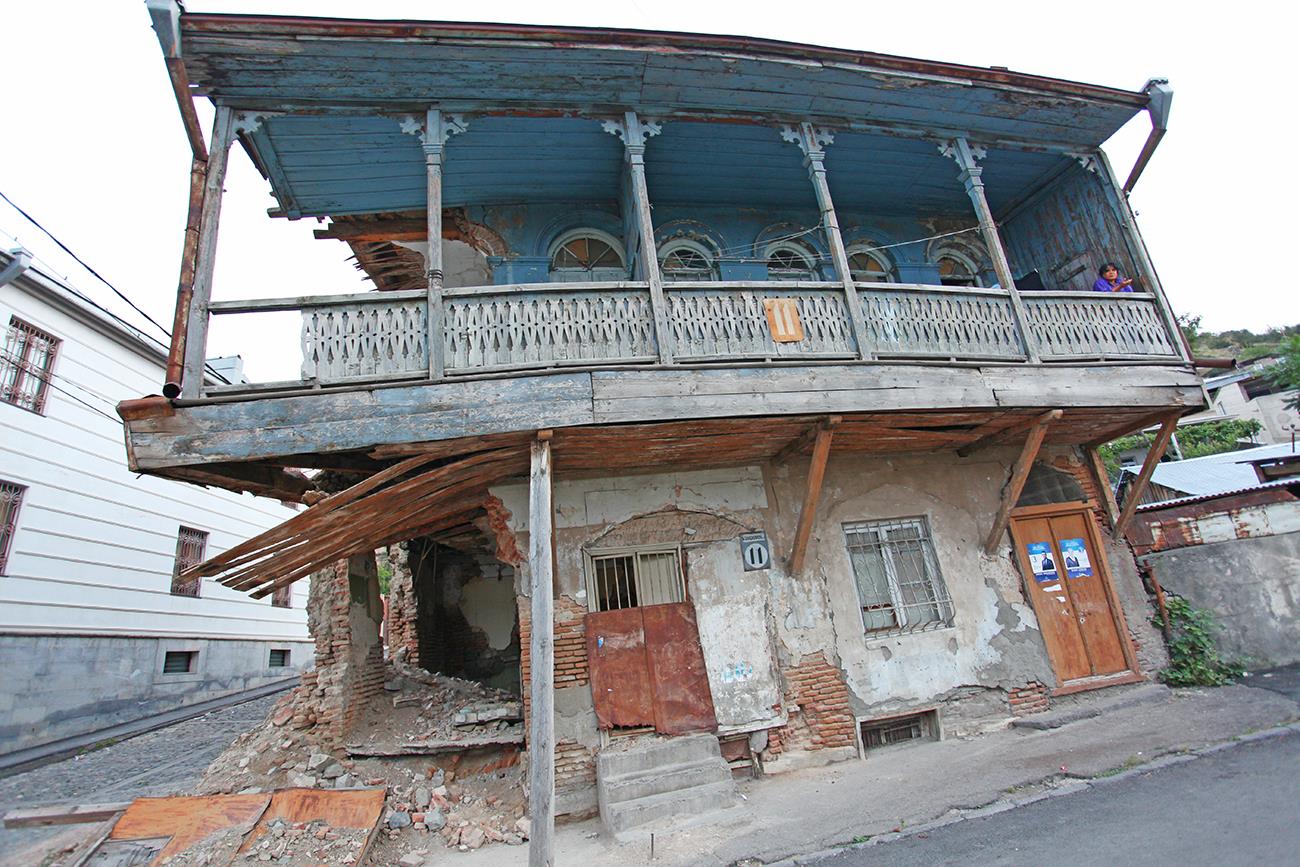 Buildings in dangerous conditions is one of the most pressing problems in Tbilisi. It has become particularly unbearable following the 2011 earthquake, which seriously damaged its central districts. The municipal authorities, both present and former ones, have nothing to boast about in this regard: nearly 30% of city residents live in conditions that can be regarded as life-threatening. It seems to be an overwhelming task for the city budget to provide for proper reconstruction that would make the homes of all Tbilisi residents safe, and, at the same time, would not in any way tarnish the ancient districts’ appearance. It is often more beneficial for the city authorities when an investor-developer negotiates directly with the population. The locals are usually ready to gladly abandon their old property in favor of an apartment in a high-rise building, which is usually constructed in a year or two at the old house’s location.

The buildings in terrible condition are not only those built in the 18th and 19th centuries, but also the relatively new houses which have recently been erected. Tbilisi City Hall has officially recognized that there are 400 dangerous blocks of flats (i.e. residential high-rise buildings) in the city. Thეse are mainly houses built in the 1970’s. The Accomplishment Municipal Service of Tbilisi City Hall claims that all these structures are closely monitored, and if any of them is recognized as ‘acutely dangerous,’ then the situation is immediately rectified. 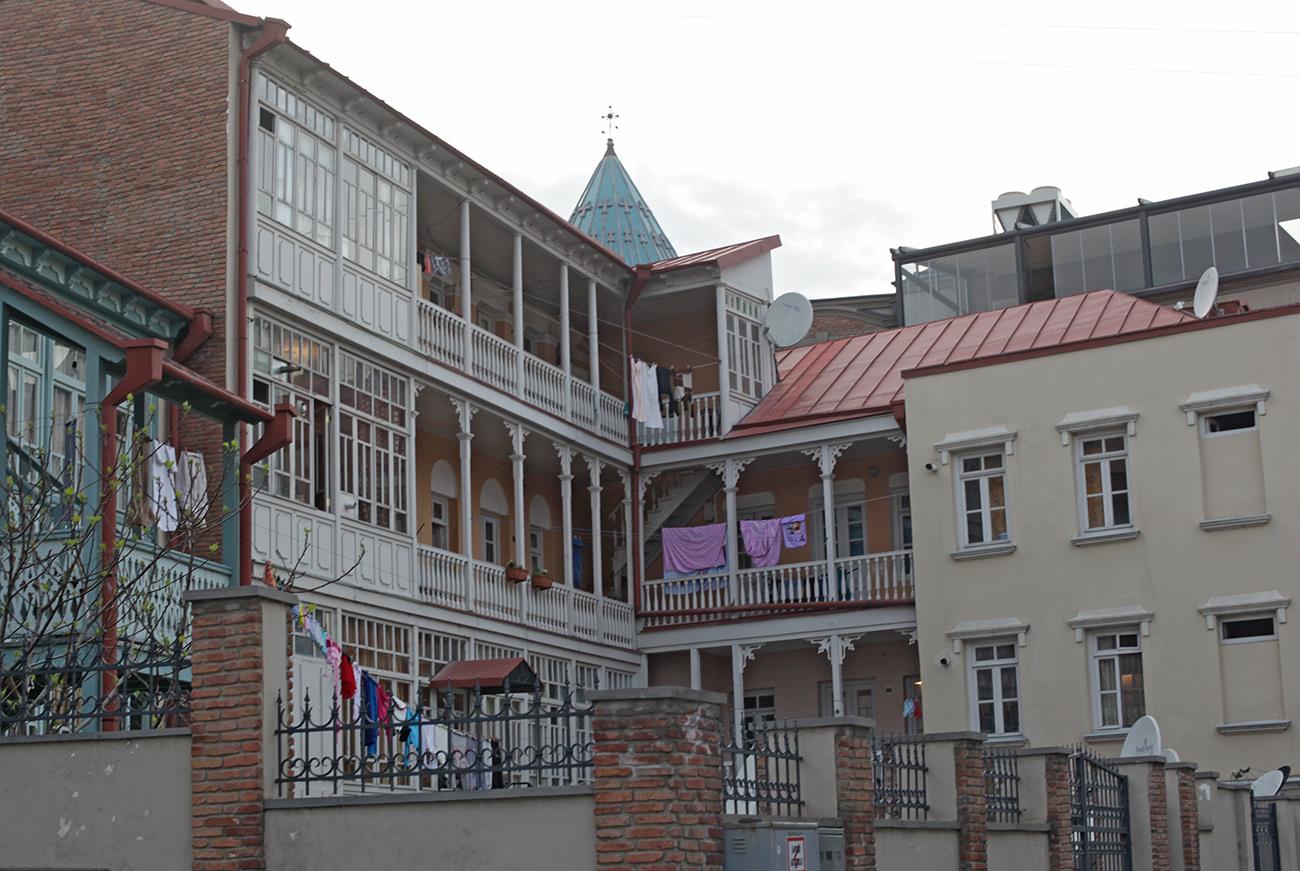 At present, the municipality is carrying out the ‘New Tiflis’ project. This project provides for the rehabilitation and reconstruction of old districts. Currently, this consists of 47 houses on David Aghmashenebeli (David the Builder) Avenue, whic h the city authorities promise to fully restore and rennovate, as well as to replace engineering and communication networks. A similar project was implemented in Tbilisi in 2011-2012, but then, as is the case now, only buildings located in the proximity of the center are given attention, whereas those that are along the city outskirts are simply ignored.

Traitors. Or victims?
A four-day war