600 shades from six colours: carpet weaving and restoration in Yerevan

Megerian Carpet is a place where you step inside and wonder: “Can we even walk around in here?” There is beauty all around you – even under your feet.

But the staff assure you:

“Don’t worry, you can walk on the carpet, nothing will happen.”

Megerian Carpet was founded over 100 years ago in New York. It was involved in the purchase and sale of carpets, and also repairs.

In 1970, the company opened its first carpet weaving factory in Egypt, and later in other countries.

In 2002, Megerian Carpet bought the Aygorg factory in Armenia, where carpets used to be woven in Soviet times. Now it is a museum of antique and modern carpets that weaves carpets from yarn dyed only with natural colours.

For example, a shade of yellow is derived from the immortelle flower, while another from the chips of a white mulberry tree. Brown comes from the shells of walnuts, while light-chestnut comes from the skins of white pomegranates, which grow in the south of the country in Megri.

In olden times, Armenian carpet weavers derived red dye from an insect called the Armenian cochineal. However, on today’s market, a gram of this dye costs more than its weight in gold.

The red dye is now extracted from madder root, with which Easter eggs are generally painted. 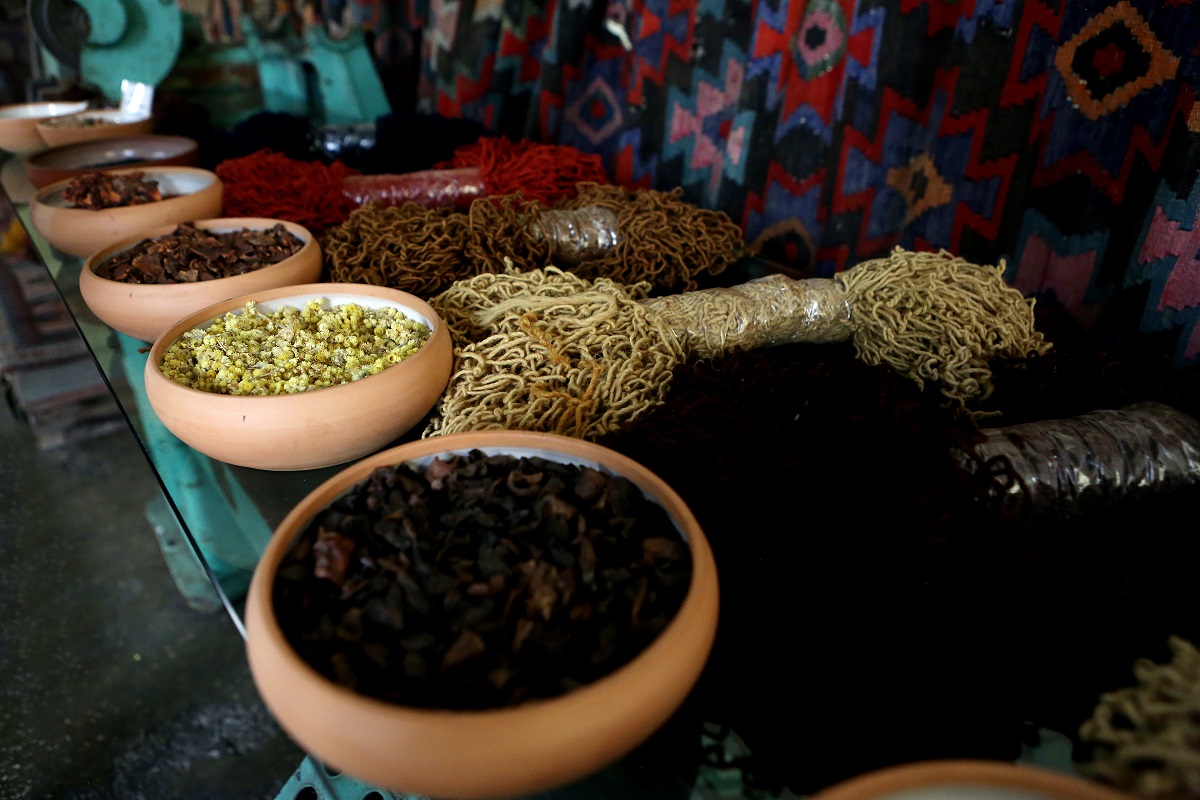 The company only imports a dark blue indigo dye from abroad.

By combining these six colours, Megerian Carpet can make more than 600 shades. The colours are fixed with the help of alum, lime and two other components that the company declined to name as it is a trade secret. 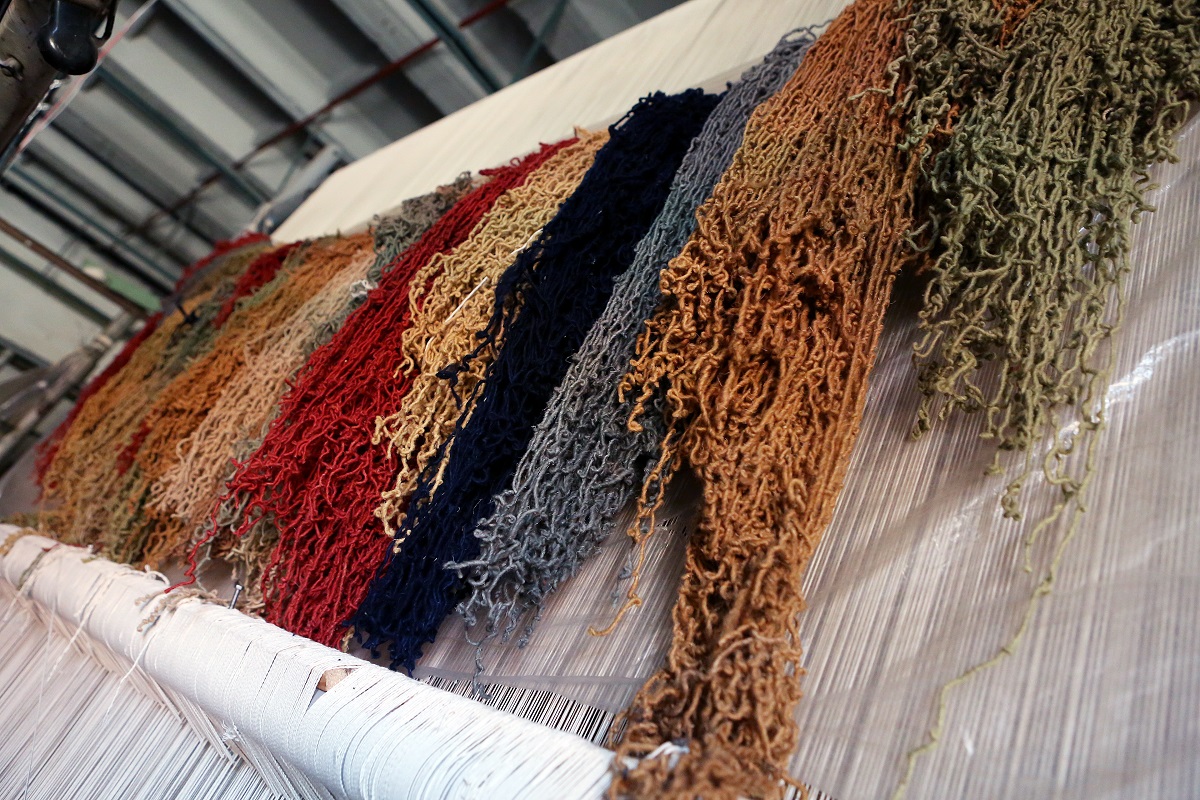 Thanks to this formula, the colours retain their vibrancy for a long time and do not fade.

The oldest carpet in the museum is a 400-year-old Vaspurakan (photo below).

The left part of the carpet was restored in Soviet times with the help of chemical dyes and is very different from the colouring on the right side. The carpet was not restored but it was not damaged, either.

The right side of the carpet is proof that the yarn dyed with natural colours does not lose its vibrancy.

There is a large work table in the museum on which a carpet was woven for the upcoming 2800th anniversary of Yerevan. 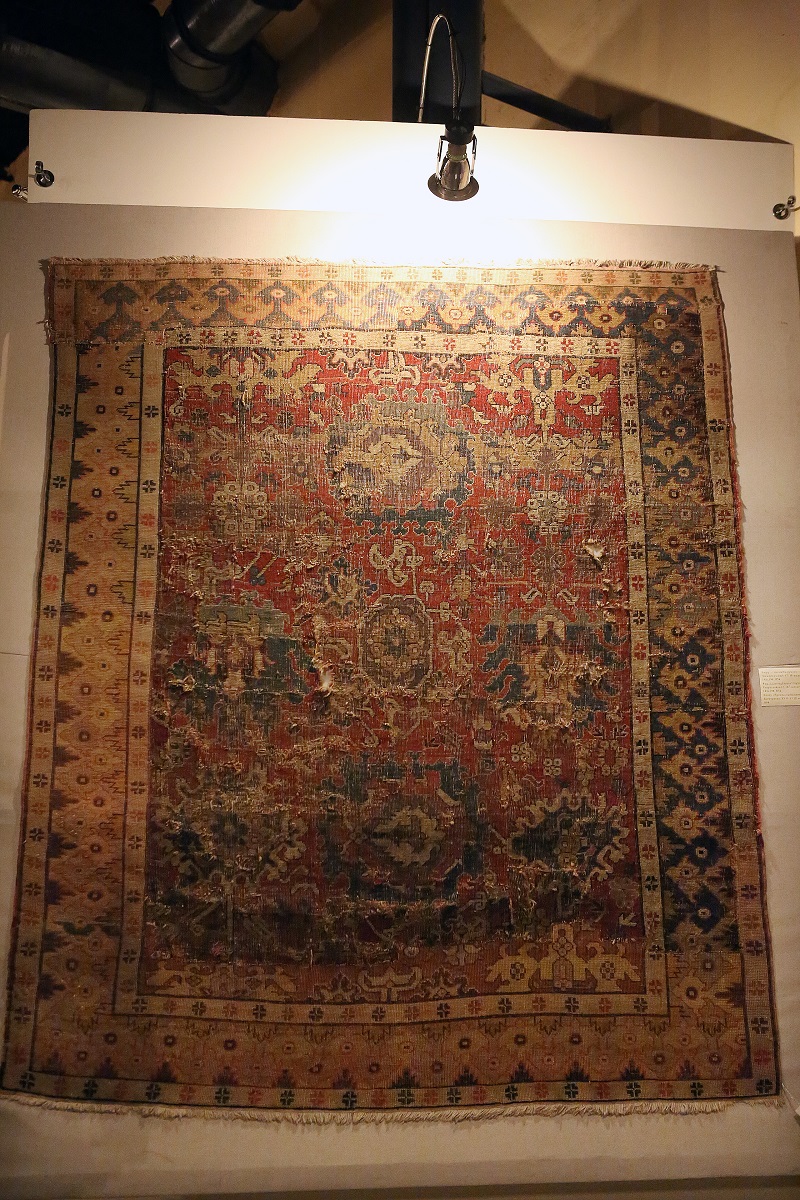 Four craftsmen worked for more than a year on the carpet. The carpet displays some of the most important events connected to Yerevan’s history. 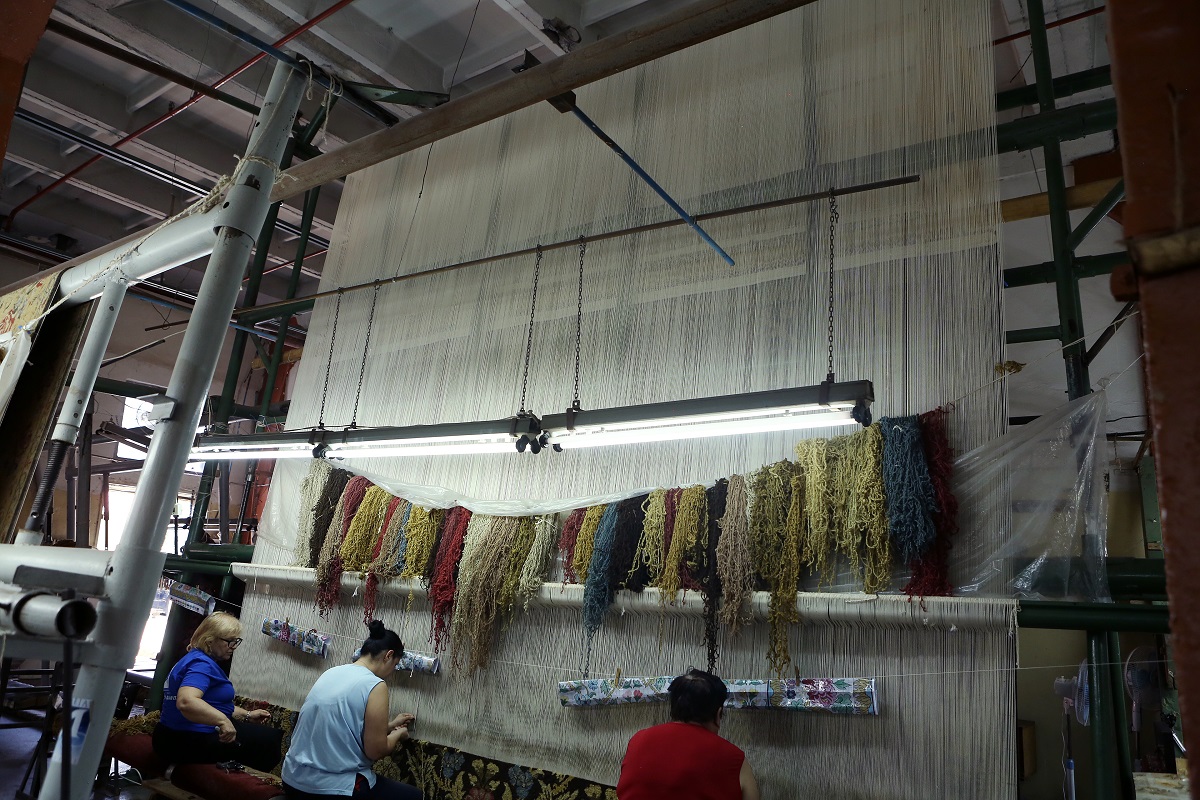 The company buys up old Armenian carpets from across the world and recaptures their designs on new carpets thanks to the efforts of the craftsmen. 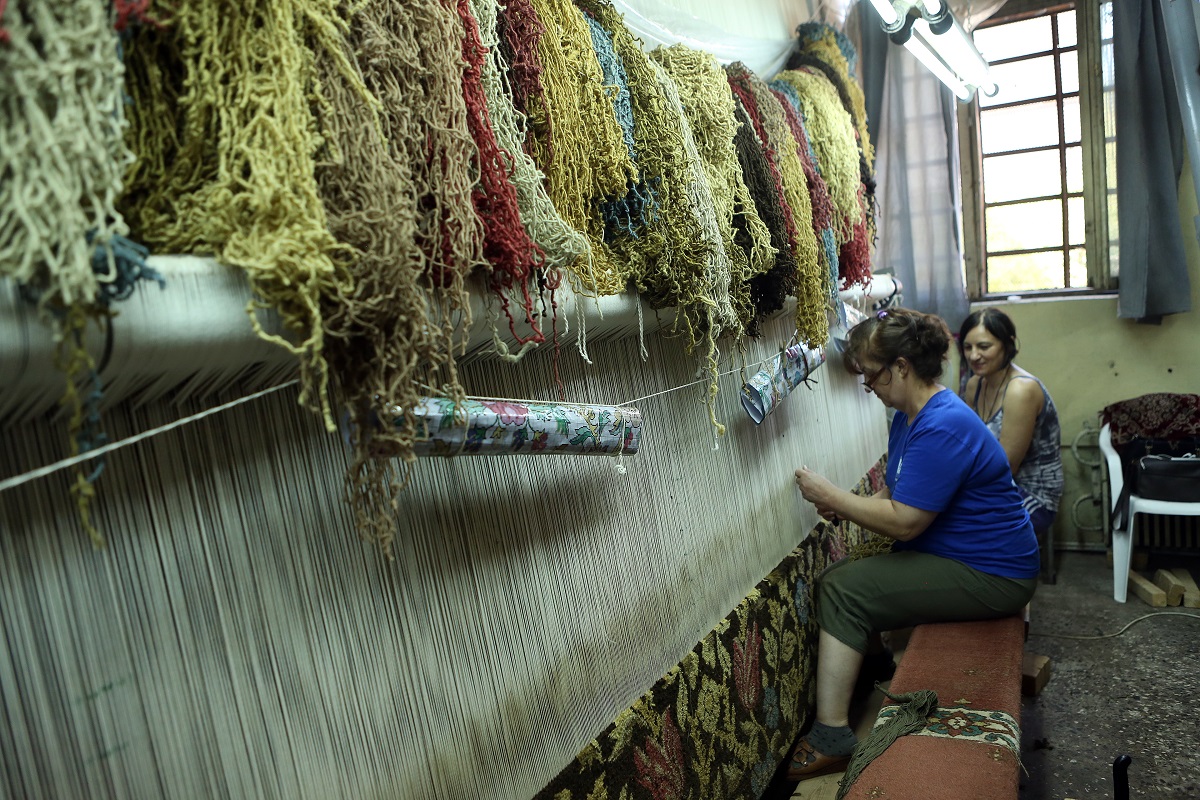 The finished carpets are first cut, then combed over five times by hand so that threads do not fall out later onto the floor.

After that, the reverse side of the carpet is treated with wood tar to protect it from moths.

About one month goes into processing the final product. 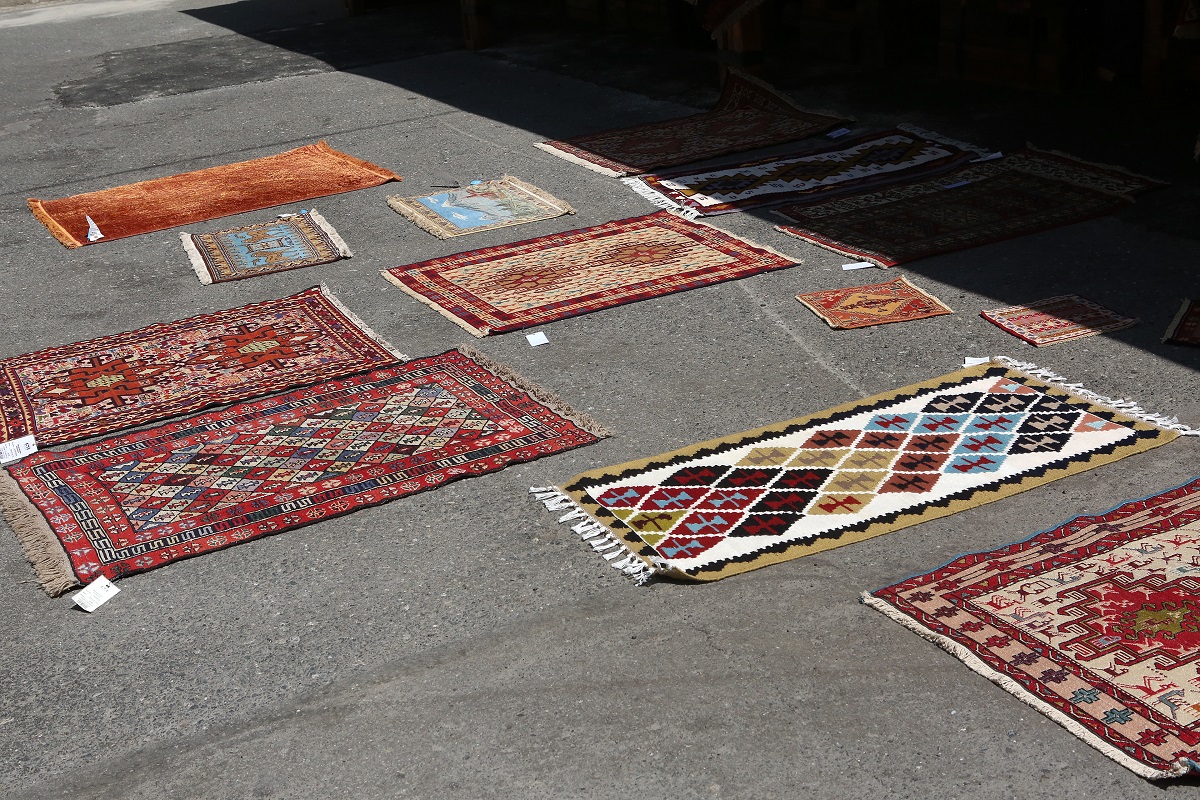 An original Lori carpet (photo below) is preserved in the treasury museum of Etchmiadzin. Here, it has been reproduced six times, but not for sale. They are given to people who have contributed to Armenia’s development and increased awareness of it around the world.

Another Lori carpet was woven for George and Amal Clooney. 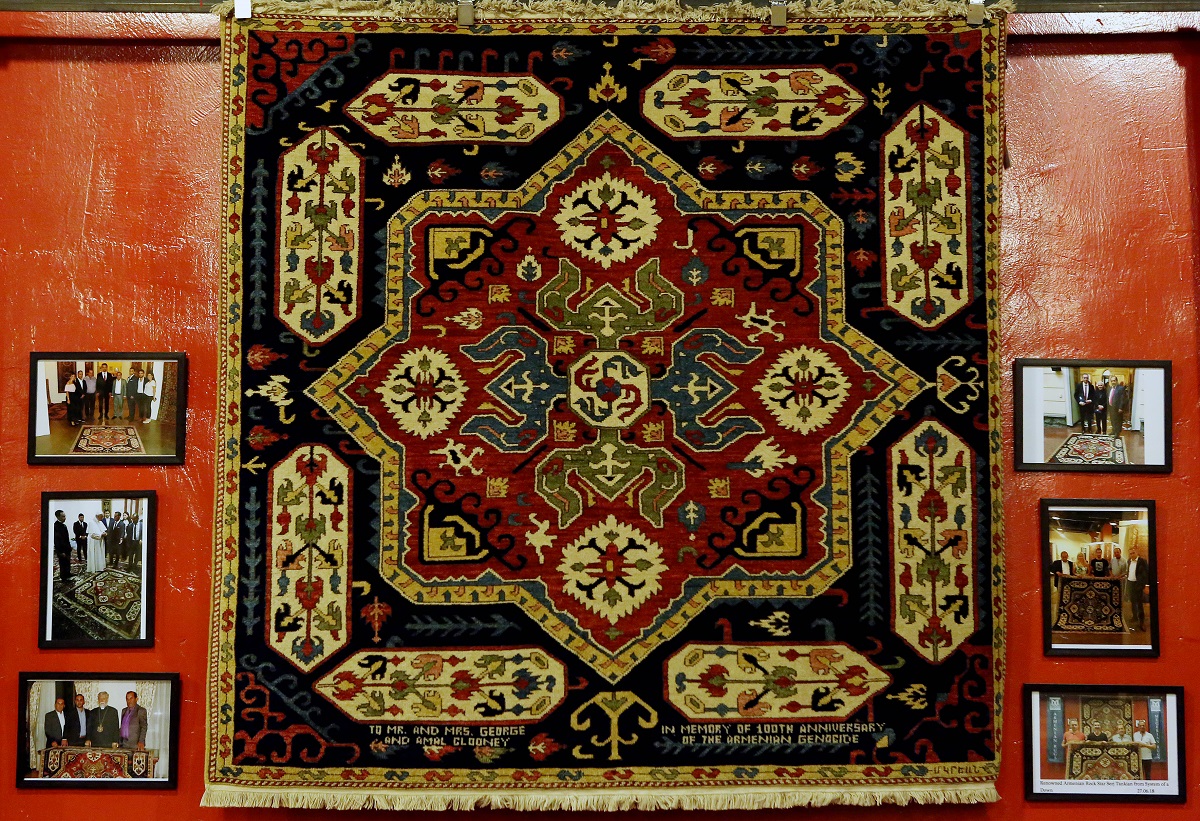 Some of the carpets on display in the museum reflect the history of certain families.

This 150-year-old carpet went through the Armenian Genocide. In 1915, the mother divided the family carpet into two pieces and gave them to her two daughters who were forced to separate. Fifty years later, thanks to the two halves, the sisters found each other in New York. 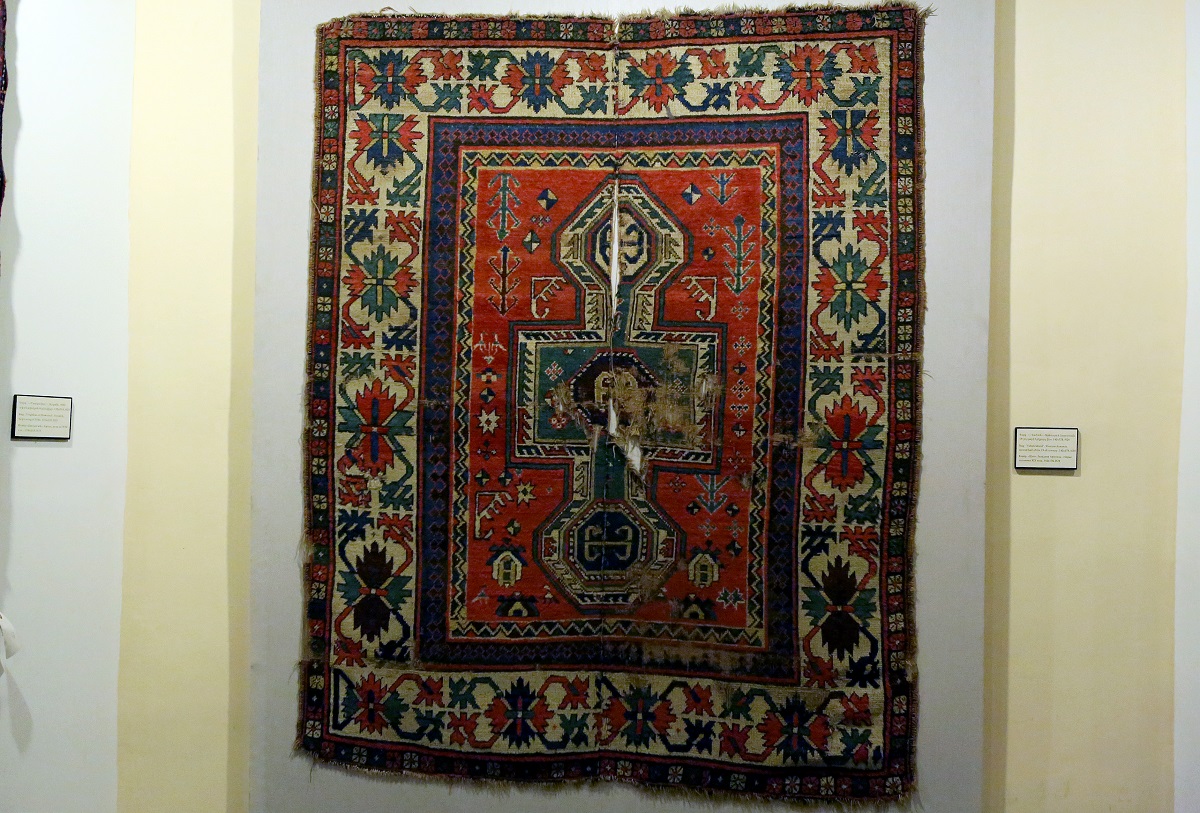 Every carpet has a history and some even have symbolic importance.

This 200-year-old Nshagorg (photo below) symbolises the continuation of the clan. Women who were unable to give birth and girls that wanted to get married believed that weaving such a carpet by hand would fulfill their wish. 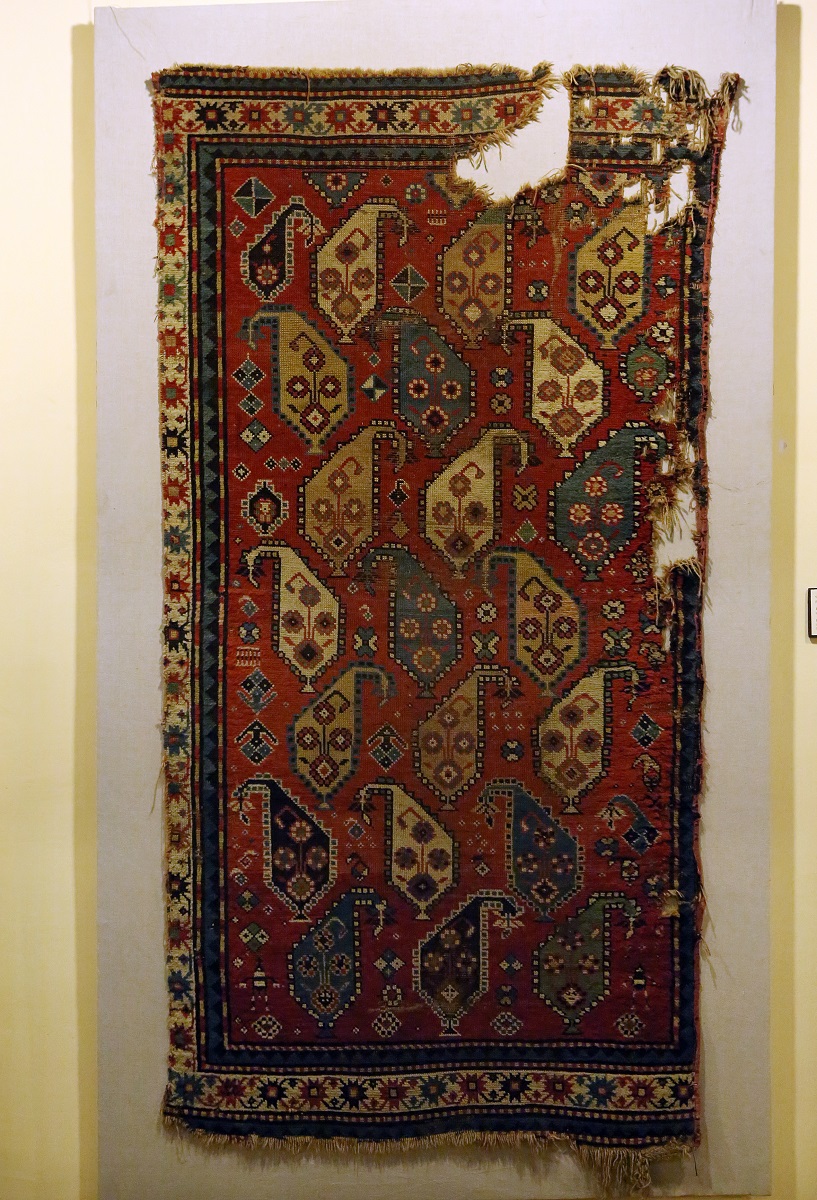 A Persian khan some two hundred years ago asked Armenian craftsmen to make a carpet with the motives of Ferdowsi’s Shahnameh (photo below). 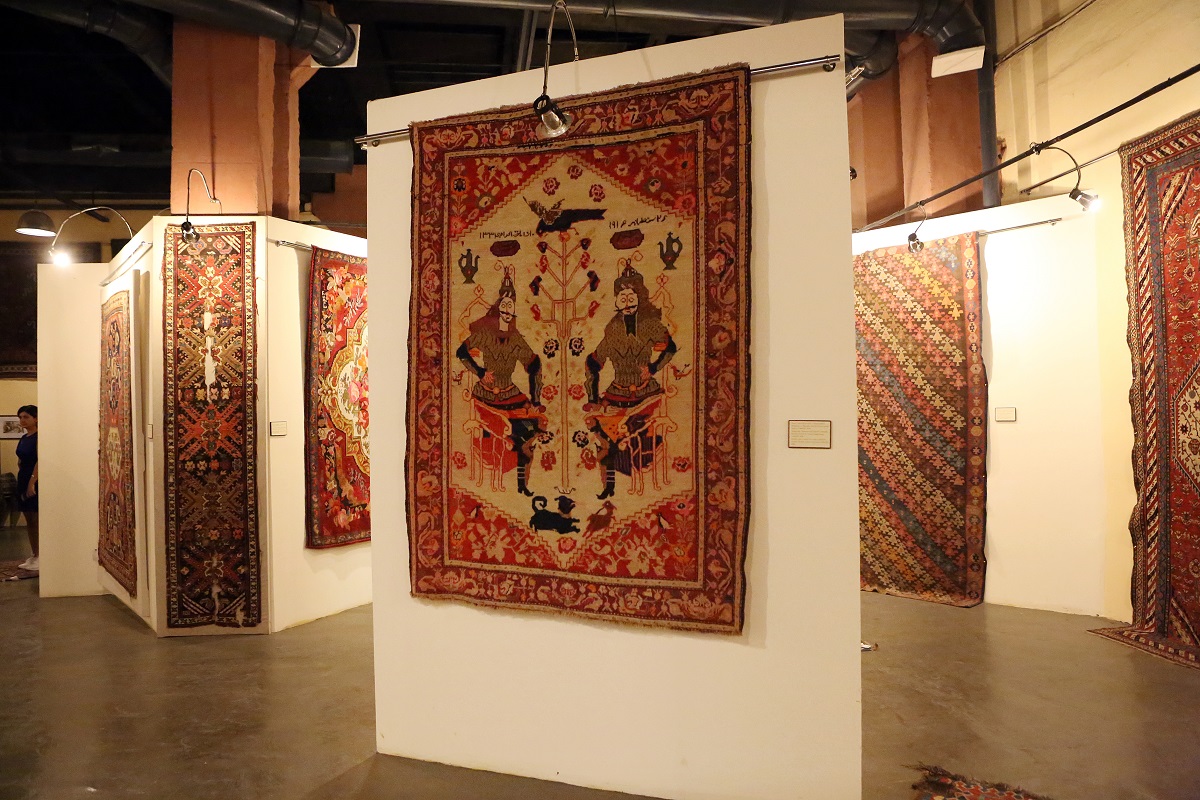 One of the most impressive displays in the museum is the Pazirik carpet, the original of which is kept in the Hermitage museum.

This is the oldest carpet in the world (photo below). It is believed to have been woven in the 5th Century BCE and has Armenian origins.

Three arguments are used in favour of this thesis: the carpet was woven with Armenian double knots, dyed with ink from the Armenian cochineal and its patterns repeat frescoes of the Urartian court [ed. An ancient state that existed on the territory of the Armenian plateau]. 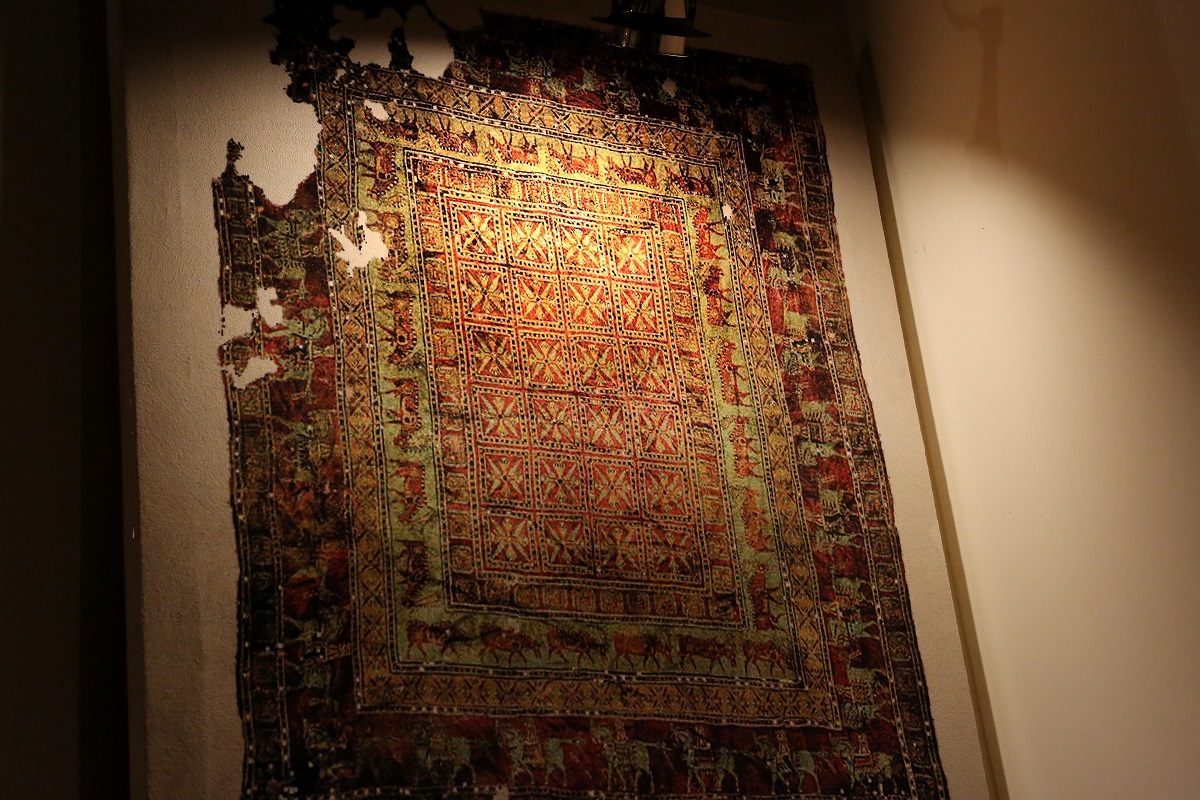 There are also unique silver ornaments in the museum which feature the same patterns found on old Armenian carpets. 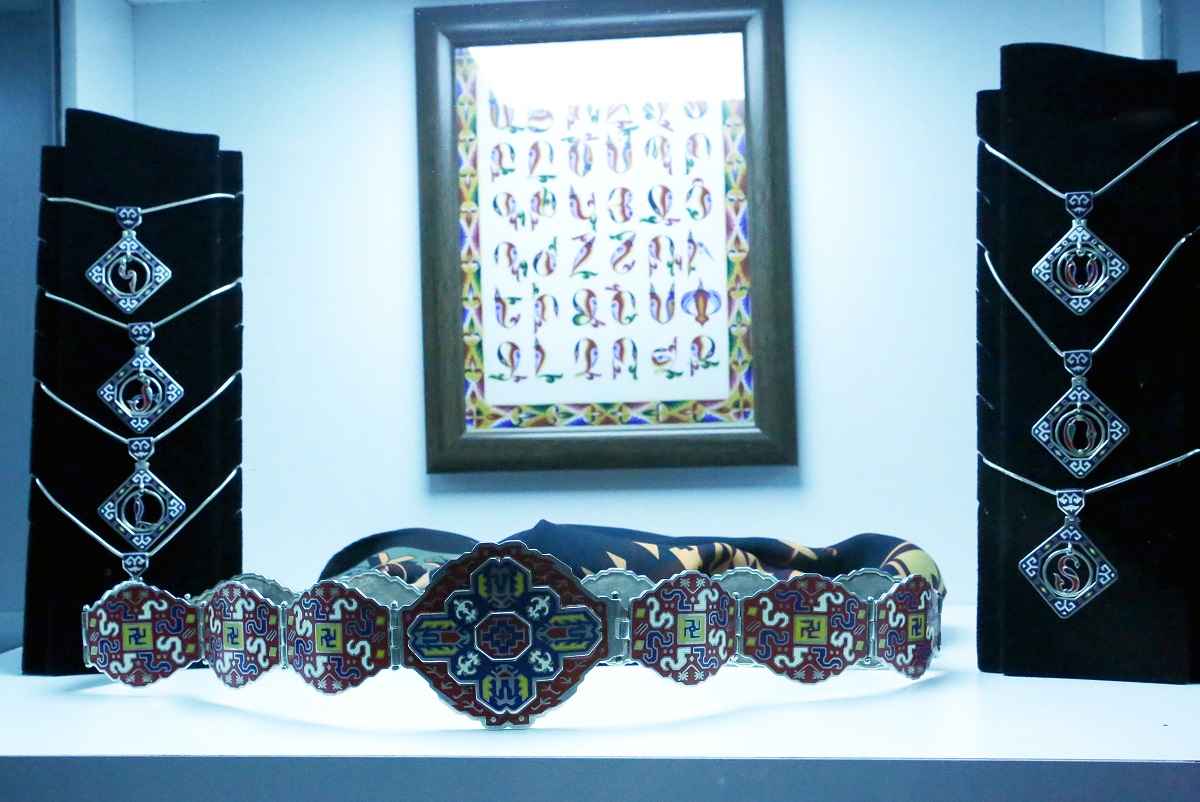 The museum also offers antique and modern carpets for sale. 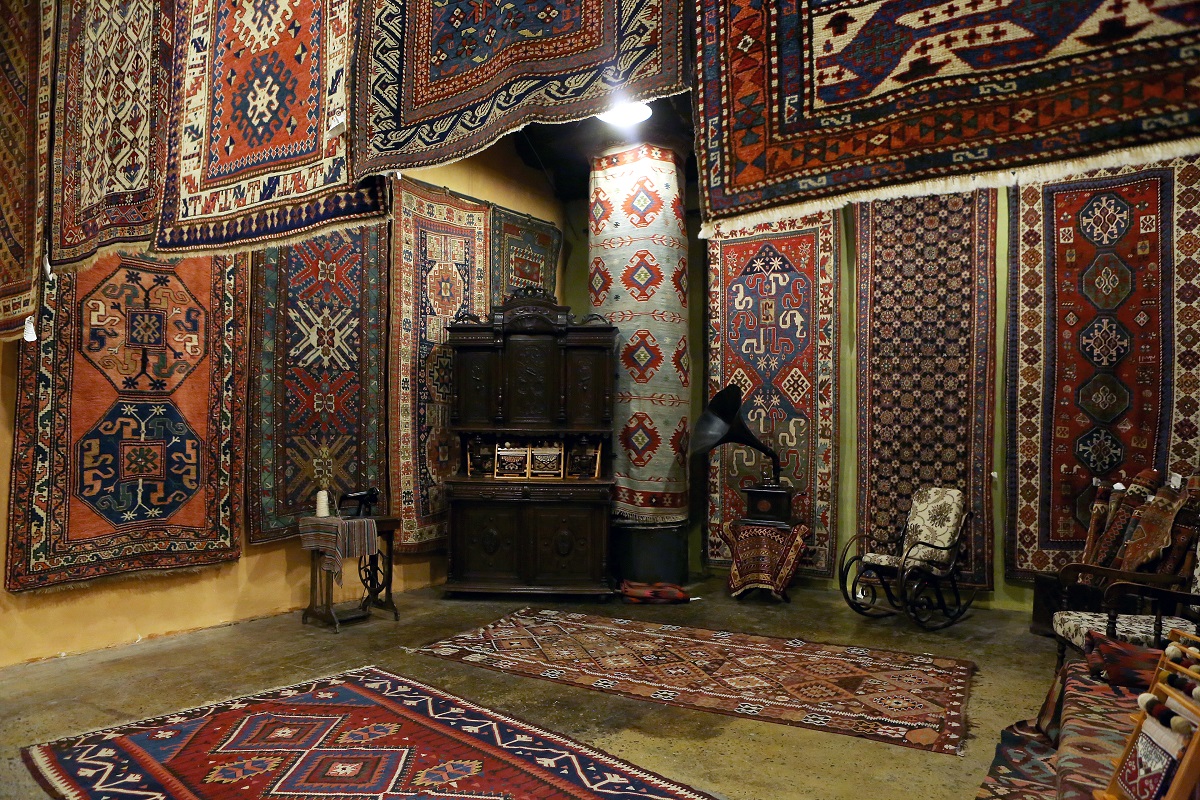