‘The most significant problems in Armenia’s human rights field have always related to the restriction of the right to change power. There have been mass violations of the people’s rights in course of the political processes, in particular, during elections and the post-election period.’

That’s the opinion of Armenian human rights activists, with annual reports assessing the human rights situation in Armenia also testifying to the aforesaid.

Why can’t human rights and politics get along with each other?

Under the Constitution, the citizens enjoy the right to a peaceful change of power. However, this right is actually continuously restricted by the violations during the election processes. Avetik Ishkhanyan, the Chair of the Helsinki Committee of Armenia, believes that:

“The main reason for the unsatisfactory human rights situation in Armenia is the lack of independence of the judiciary. There is no separation of powers. The judicial system is in the President’s power. In circumstances where the police, the National Security Service, the Special Investigation Service, the prosecutor and the judges are subordinate to the President, any justice is out of the question.”

The human rights activists couldn’t recall a single post-election period when the citizens and the opposition forces didn’t speak out against ballot rigging and didn’t try to defend their votes by hitting the streets:

“The first such mass protest rally took place in 1996. The outraged people hit the streets, and a few days later assailed the Central Election Commission (CEC). There were clashes, troops were brought into the city, the ‘Yerkrapa’ members [Yerkrapa – volunteers union] opened fire on civilians. It was the first huge wave of protest.”

Also, in 2008, the people went out to Freedom Square, demanding that the presidential elections be recognised as rigged. As a result, 10 people were killed in Yerevan’s center and the guilty have yet to be punished.

The beginning of the struggle for human rights

Larisa Alaverdyan, the first human rights activist in Armenia, believes that the human rights advocacy in Armenia originated at the beginning of the movement for the country’s independence in soviet years:

“As a result of that very struggle for independence, following the referendum, the citizens of Armenia decided to withdraw from the Soviet Union and declared their independence. Through its vote, the Armenian nation stated that having been part of the Soviet Union, it was restricted and deprived of its sovereignty, and thus finally withdrew from the USSR.”

Artur Sakunts, the head of the Helsinki Citizens’ Assembly Vanadzor office, says that after the collapse of the Soviet Union and declaration of Armenia’s independence there wasn’t any civil society. The leaders of the independence struggle became political figures and set up the parties.

“The so-called ‘charity associations’, that were, in essence, the human rights organizations, were organized in 1988. However, since they couldn’t be registered under that status, they were referred to as ‘charity’ ones. It was the same with compatriot unions.”

The human rights organizations were registered only after 1992, when Armenia became a UN member. They were mostly engaged in protection of the rights of those who had abandoned their places of residence as a result of the Karabakh conflict, i.e. the refugees, forcibly displaced persons, hostages, prisoners of war and missing persons. In other words, the matter concerned the rights that had been violated as a result of actions of another state, in that case, the adversary.

The organizations dealing with the rights of vulnerable groups (women, children, elderly and disabled) also started operating in Armenia in 1992. From 1995, some organizations focused on the protection of rights of individuals engaged in political and civic activities.

Mika Danielyan, and Avetik Ishkhanyan’s organizations were set up in that period. The latter got engaged directly in the human rights activities in the post-election period.

In parallel, the organizations were set up to protect the rights of journalists subjected to violence and pressure while performing their professional duties – coverage of civil and political processes.

“We defended them as best we could”

Artur Sakunts says that they didn’t have the leverage to influence the government, therefore, they just placed the developments on record. There were neither the ‘tools’ for restitution of violated rights, nor even the possibility to challenge them in court. All this appeared in Armenia in 2001, after joining the Council of Europe.

“We defended them as best we could. We documented everything, drew up reports and forwarded them to international organizations, but that was it – there was nothing else we could do. The Jehovah’s Witnesses were standing trial. What could we do? We were writing letters to the prosecutor, but were told: “How come? What are you doing?” At least we tried to influence the situation.

Some institutional changes took place in the country after joining the Council of Europe. The Ombudsman’s institution was set up in Armenia, whereafter a legal debate arose between the Ombudsman and Robert Kocharyan, the then-President of Armenia, regarding the cases of those who were deprived of their houses due to the construction of North Avenue.

According to Artur Sakunts, the following mindset gradually formed: the developments and human rights violations should be considered from the perspective of democracy and the rule of law.

As Armenian human rights activists point out, the rights of political movement members have been violated en masse since 1995, and in recent times, also violations of the rights of the members of civic movements. 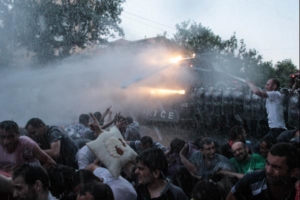 The matter concerns the “Electric Yerevan” and ‘100 Drams’ protest rallies [against a hike in power tariffs and an increase in taxi fare route costs, respectively], as well as rallies initiated by the supporters of the ‘Sasna tsrer’ group, which seized the patrol police regiment in July this year. It was then that the participants in the peaceful protests were detained; some arrests took place that were regarded as political ones, with the rally participants and reporters being subjected to violence. Larisa Alaverdyan, a former human rights activist, emphasized that those events point to the development of civil society and the growing legal awareness of people:

“The more the number of people who are aware of and defend their rights, the more dangerous the society becomes for the authorities. It threatens, with a change of power and by binding them over, to form a government that will respect human rights.”

Why aren’t there any changes

According to human rights activists, the Armenian authorities fail to comply with their commitments under international instruments, since they aren’t ready to change. “They have assumed the commitments, but they want to use some cunning. They are thinking of pulling a fast one on people, because they need a mandate. It’s an honor to be a member of the democratic club, it’s additional legitimacy,” says Artur Sakunts.

Avetik Ishkhanyan, in turn, points out that those who sign international treaties, don’t share this system of values, therefore, they continuously violate and circumvent the system. They have no respect for the values of the civilization that can lead to country’s development.

They continue to violate prisoners’ rights, with prison conditions being far from satisfactory. The state and public opinion has made sexual and religious minorities more vulnerable. Intolerance and discrimination are displayed towards them.

Women, who are continuously subjected to violence, are also vulnerable in Armenia, which is a result of traditional, or, as Ishkhanyan has put it, ‘backward’ thinking. There are mass violations of the labor law, but no one talks about it.

Artur Sakunts believes that the positive changes that occurred between 2001-2007 haven’t  further been properly developed, because of the growing violence on part of the police year in and out:

“Since 2008, it has become clear that those changes were just an imitation. The prerequisites, that offered prospects for positive changes, have been buried. It has become obvious that political interests are placed ahead of human rights.”