15 soccer players that the Caucasus is proud of

Sukhum/i football trainee, Nikita Simonyan was both, one of the most brilliant stars of the soviet football of the 40-50s and one of the most successful coaches. The best scorer of Moscow ‘Spartak’ of all time (160 goals); four-time USSR champion player and three-time champion coach; two-time winner of the USSR Cup as a player and four-time winner – as a coach; Olympic champion of Melbourne 1956.

Although Kipiani was not frequently involved in the USSR national team (only 19 games and 7 goals), but his fantastic performance in Tbilisi ‘Dinamo’, for which he played from 1971 till 1982, made him the Georgian and Soviet Football legend. David Kipiani was the brilliant star of already stacked team of ‘Dinamo Tbilisi’, that won the prestigious UEFA Cup Winners’ Cup in May 1981. After finishing his playing career, he became a coach. On 17 September, 2001, Kipiani died in a car accident at the age of 49.

Kaladze is, perhaps, the most successful footballer of all time in the Caucasus. He became the champion of Georgia as part of Tbilisi ‘Dinamo’, Ukraine’s champion as part of Kyiv ‘Dynamo’ and Italy’s champion as part of the famous ‘Milan’ club. Being the AC Milan main defender, he twice won the most prestigious club tournaments – Champions League, European Super Cup and Club World Cup. Having ended his football career, he went into politics. He is now the Vice Premier and the Energy Minister of Georgia.

Being the Abkhaz football trainee, he made his debut as part of Tbilisi “Dinamo as early as at the age of seventeen; he became the Soviet Union national team major player at the age of 20. Great speed, unique technique, excellent vision of the field and work ethic – these are the features that all together turned Vitaly into the best midfielder of his generation. It was his decisive goal, scored against “Carl Zeiss in 1980-1981 Cup Winners’ Cup final match, that brought Tbilisi ‘Dinamo’ the most precious trophy in the history of this club. He died in a car accident, in December 1982, at the age of 25. Vitaly Daraselia was named Abkhazia’s best football player of the 20th century.

Valery Gazzaev, the Ossetian football trainee, was one of the most brilliant forwards of the Soviet football of the 70-80s. He played for FC Lokomotive Moscow, Moscow and Tbilisi-based “Dinamo. After finishing his playing career, he has become no less successful coach. It was under his leaderships, that PFC CSKA (Army Central Sports Club) won the UEFA Cup in 2005. The same year, he was named the Coach of the Year according to UEFA. 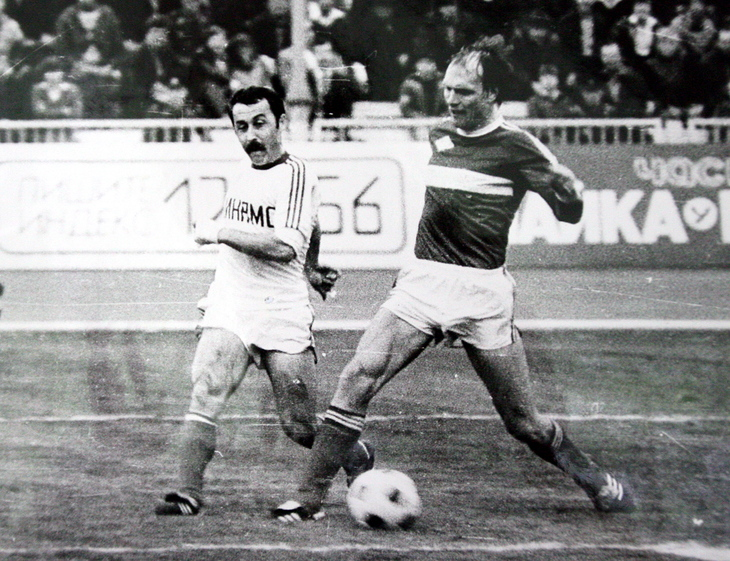 One of the best fullbacks of the Georgian and Soviet football. Khurtsilava was one of those two Georgian players, who had ever been the captains of the Soviet Union national team (besides him, Alexander Chivadze was also the USSR national team captain). He played for Tbilisi “Dinamo in the USSR championship. He got engaged in coaching activity after finishing his playing career. 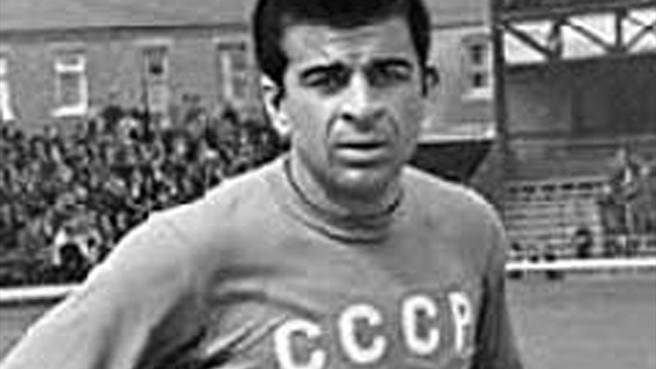 He is a legend of the FC ‘Ararat’ and Armenian football, in general. He played 295 matches in the USSR championship official games and scored 93 goals. His rate of goals scored in the USSR Top League is the record one in Armenian football. Excellent technique and endurance made him one of the best midfielders in the Soviet football. He is considered Armenian’s best XX century footballer – 2015 opinion poll revealed.

Chivadze was one of the best center-backs in the history of Soviet football. Chivadze was the captain of that famous Tbilisi ‘Dinamo’, that won the most prestigious Cup Winners’ Cup trophy, in 1981. He went down in history as one of the three center-backs, recognized at the end of the season as footballers of the year (1980). He is a holder of the UEFA Ruby Order of Merit (2001.). 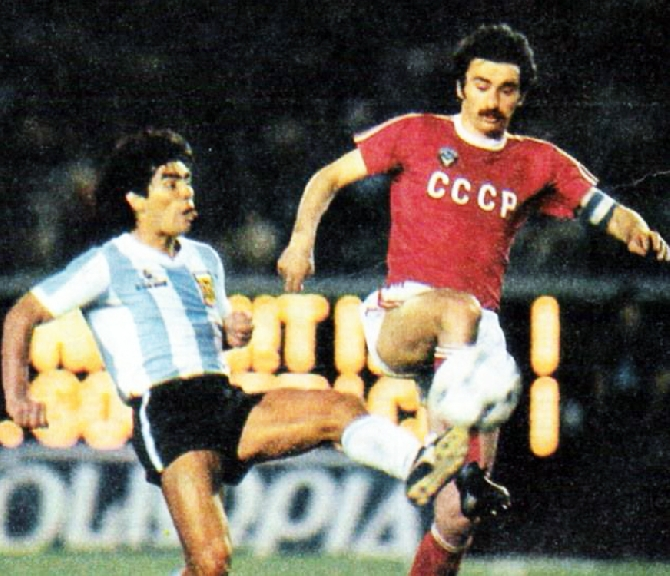 Levon Ishtoyan – FC Ararat Yerevan and the Soviet national team striker of the 70s. Ishtoyan’s goal shaped the fate of the 1973 USSR Cup final match against “Dynamo Kyiv. There is a legend that once, in Ishtoyan’s native town – Gyumri (then Leninakan), a team of fans demanded from the city authorities to erected a monument to Ishtoyan (mind that it was 1973!). Having given the screw-loose sign, the municipal officials refused and sent everybody off. The next morning, there was number 8, under which Ishtoyan used to play, painted on the back of Lenin’s monument, in the city center. Ishtoyan was extremely popular in Armenia in the 70s. Giorgi Danelia, a filmmaker, makes reference to him in his movie “Mimino. Speaking about the celebrities, Rubik Khachikyan, one of the main characters of the movie, says the following phrase: ‘If a woman every day has a chance to see an artist, an academician, Ishtoyan!’

Banishevskiy was born and brought up in Baku. He got to the local ‘Neftchi’ club at the age of 16 and quickly made his way into the first eleven. Those, who saw Banishevskiy’s play were admired and recognized his undeniable talent. Country’s renowned clubs offered him Moscow and Kiev “residence permit’, but he continued playing at home. When he was 19, Nikolay Morozov invited him to the country’s first national team. One of his hat-goals, scored from 35-40 meters, against grand Brazil national team at the Estádio do Maracanã, became a masterpiece of the world football.

In the beginning of his career, Ahrik Tsveiba, the Abkhaz football trainee, could hardly imagine that he would enter the Guinness Book of Records. Being the great center-back, he probably set an eternal record, not out of choice, but rather due to the geopolitical changes in the post-Soviet area: during his career, Tsveiba played for the national teams of the USSR, the CIS, Ukraine, Russia and Abkhazia. Besides, his track record includes one game in the Rest of the World (RoW) team. He was in demand not only as a high-professional football player, but also as a wonderful person, positively influencing the team atmosphere. When he was “Dynamo Kyiv captain, he was nicknamed ‘Nice fellow Ahrik’ and this nickname stuck with him all his career. 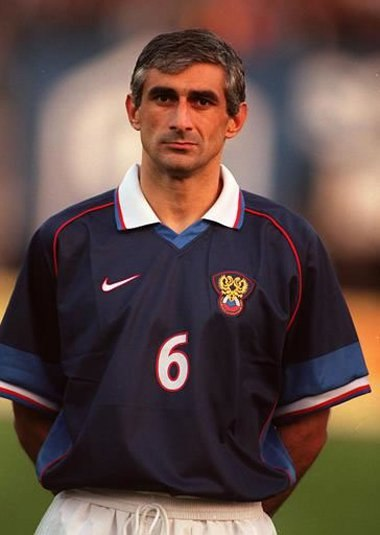 Oleg Blokhin was probably the only person, who had the same knack for a goal as Ramaz Shengelia had. He was always there – in the right place and at the right time. When ‘Dinamo Tbilisi or the USSR national team was playing, any ball, bounced to the opponent’s penalty area, as a rule, became Shengelia’s ‘prey’, who turned it into a goal. Shengelia’s talent allowed him twice to become the USSR championship top scorer.

He firsts performed in “ Dinamo Tbilisi’s first eleven at the age of 19, in autumn 1971. Then he played for ‘Dinamo’ almost until the end of his playing career in 1986. By that time, he had played 303 matches and scored 47 goals. He was the USSR champion; twice won the USSR Cup and the UEFA Cup Winners’ Cup. In 1981, he got an invitation from the FC Madrid Real, but Gutsaev politely declined the invitation: ‘I don’t want to leave ‘Dinamo’ and move from Tbilisi, because I love this club, the city and the fans. “Real officials took with respect the reasons for such a polite refusal. However, they couldn’t understand the meaning of my words that, among other things, I have a “Volga car in Tbilisi that I can’t live without. It took the Spaniards long to figure out, what was that car, that made Gutsaev unwilling to leave Tbilisi.’ 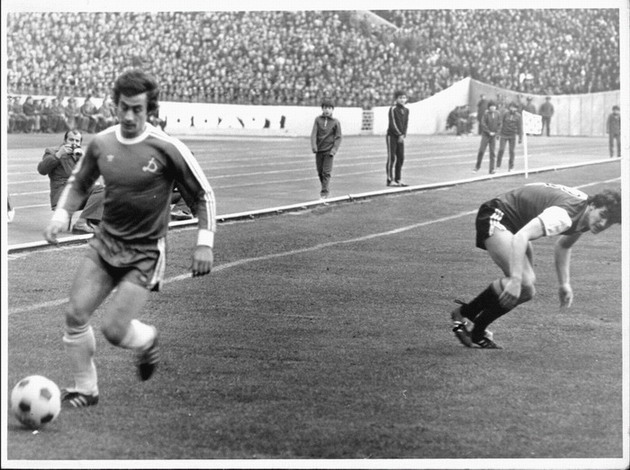 A famous Soviet football player, a striker. Europe’s champion (1960) as part of USSR national team and USSR champion (1964) as part of ‘Dinamo’ (Tbilisi). Meskhi was an unrivalled technician. If there was a “Garrincha’s Trick in Brazilian football, Soviet football successfully competed with it by ‘Meskhi’s trick. In the 50-60s, his unpredictable dribbling made funs go almost crazy. A short, tight and even a little bit stodgy striker could absolutely easily ‘cheat’ one or two guardians. It is said that in the early 60’s, during the matches with “Dinamo Tbilisi participation, people preferred to sit off the center and closer to the corner flag, where Meskhi used to play, in order to better see his technical tricks. According to the Georgian football fan poll, Meskhi has been named the best Georgian football player of the XX century.

Europe’s champion (1960) as part of the USSR team and the USSR two-time champion (1960 and 1964) as part of ‘Torpedo’ (Moscow) and ‘Dinamo’ (Tbilisi). The glory of the Soviet football! The King of Football, Pele, himself, invited Slava Metreveli to play is his farewell match. His name got into a folklore, which is the highest form of popularity. Everybody knows a joke about Metreveli. ‘Once a farmer from a remote Georgian village came to Moscow. He was surprised to read the slogans, hanging everywhere: ‘Slava KPSS! (rus) (literally meaning “Glory to the CPSU (Communist Party of the Soviet Union!)) ‘. He asked the first by-passer: ‘Dear sir, could you, please tell me, who the KPSS is? I’ve heard about Slava Metreveli, but I have never heard about Slava KPSS. Which team does he play for?’

Schools reopen in Azerbaijan, but not for everyone