All of Yerevan’s mayors have promised to demolish a number of the city’s crumbling buildings and provide their residents with normal housing.

None of them have. There are more than a hundred such buildings in Yerevan that are beyond any state of repair. However, without other options, people continue to live there.

“As soon as it starts to rain, the children run for the buckets, place them in the room, and I cover the sofa and the beds with an oilcloth. Then the neighbors come, take the children to their place for the night, so that they do not stay at home and do not get wet. We had been gifted two television sets – but so much water dripped from the ceiling that they broke”, says Kristine Karapetyan, who lives in one of these buildings.

Kristine is 35 years old. She has spent half of her life in this building. In the past, the building was the fire station of a factory. The plant is known as Mars. People have been living in this building on the verge of collapse of the past 20 years.

It is located on the outskirts of the capital, in the Malatia-Sebastia administrative district. To get here, you need to get to the last stop of one of the route lines, walk a few hundred meters through a deserted area which resembles a garbage dump and where stray dogs walk around.

This building does not meet the standards of a residential building, since it was built as a factory. And despite the lack of facilities and its critical condition, about 40 families live here. People say the building is “suspended in the air”, because nobody can come up with a solution to the problem.

Kristine settled here with her parents when she was 17 years old. She remembers that when they first settled, there were only 30 inhabitants in the building. Over the years, more people moved in, and the quality of life deteriorated. 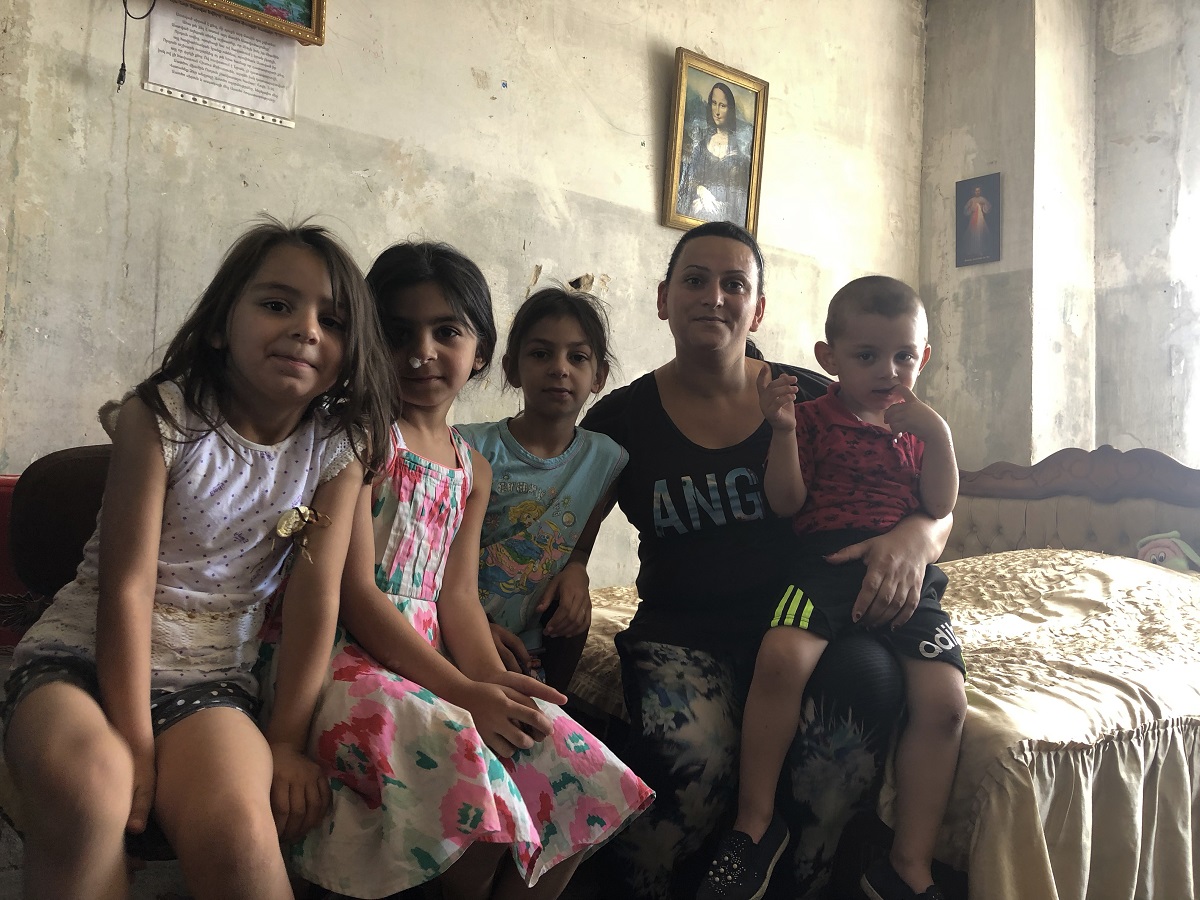 She met her future husband husband. In this building, Kristine has had her six children – four girls and two boys, all still minors.

A family of eight huddles in a room of 18 square meters. This is the living room and the bedroom. All family members at night somehow get arranged to sleep on the same sofa and one bed. The apartment has a bathroom in which there is only a toilet and sink – no shower. 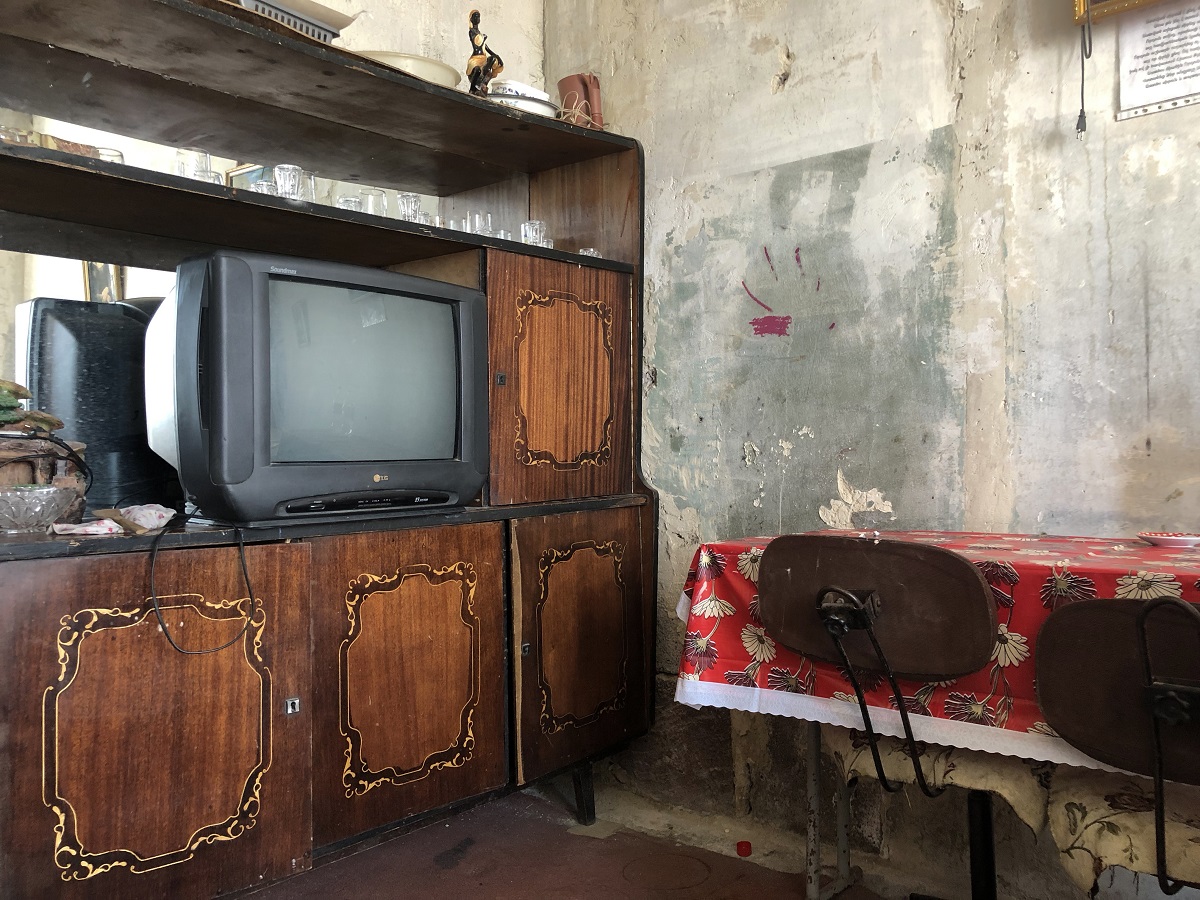 This room has never been repaired – the walls and ceiling are cracked, the whole plaster has long been peeled off.

There are electrical wires throughout the building and in some apartments they are not fixed or hidden. This has often led to accidents. 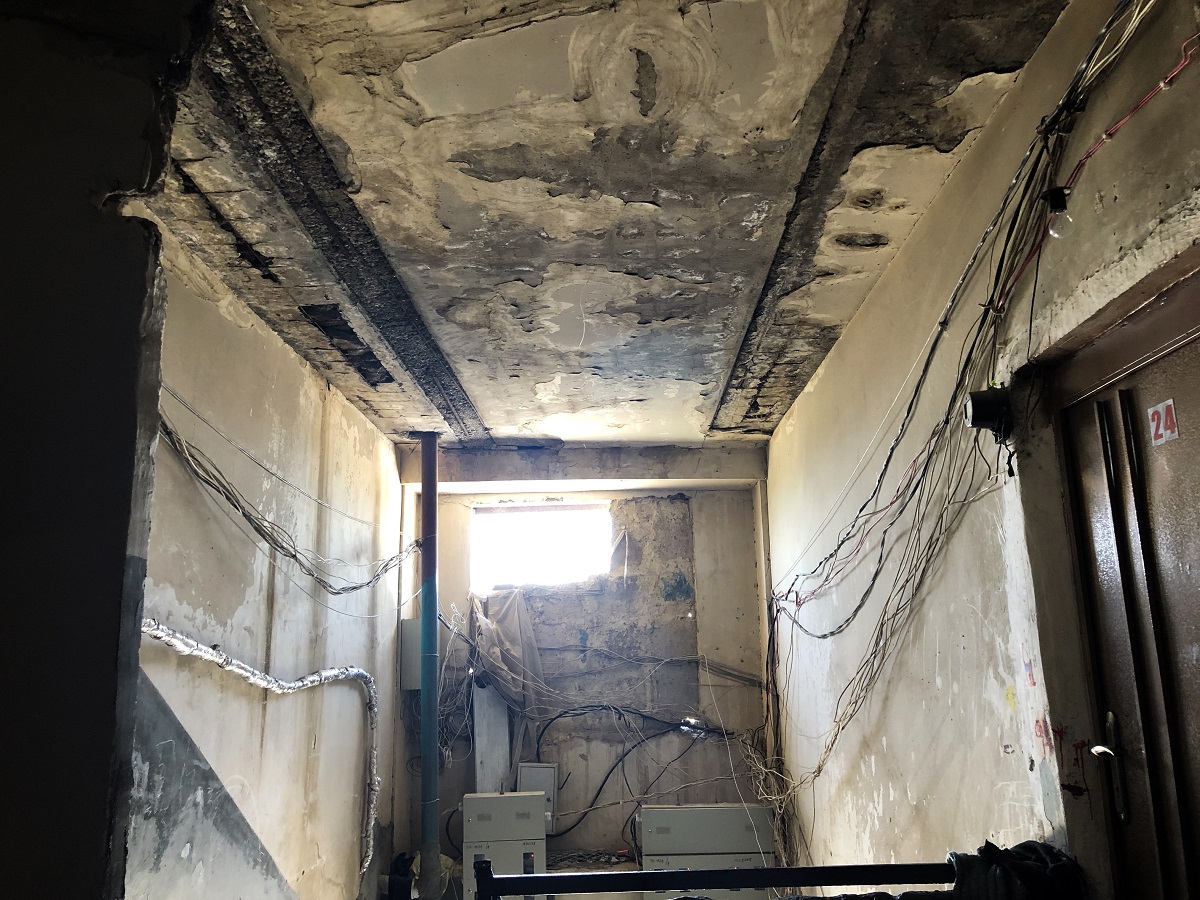 Because of the open wires hanging from the ceiling a few years ago, Kristine’s son was injured. 11 months ago her child lost two fingers and part of a lip because of an electric shock.

Conflicts often arise between the residents due to the lack of real sanitary facilities – water often seeps down into apartments and ceilings and walls become seriously damaged.

Residents are most worried about their children – they constantly walk behind them to make sure they carefully go up and down the destroyed stairs, and rats, dogs and even snakes are in the yard.

“And the children play all day here among these stones and the garbage. They of course don’t like it here, but they have nowhere to play, nowhere to go. And we have no money to have them go on the carousel or to the parks. I have already lost hope. I think I’ll spend my whole life here”, says Kristine. 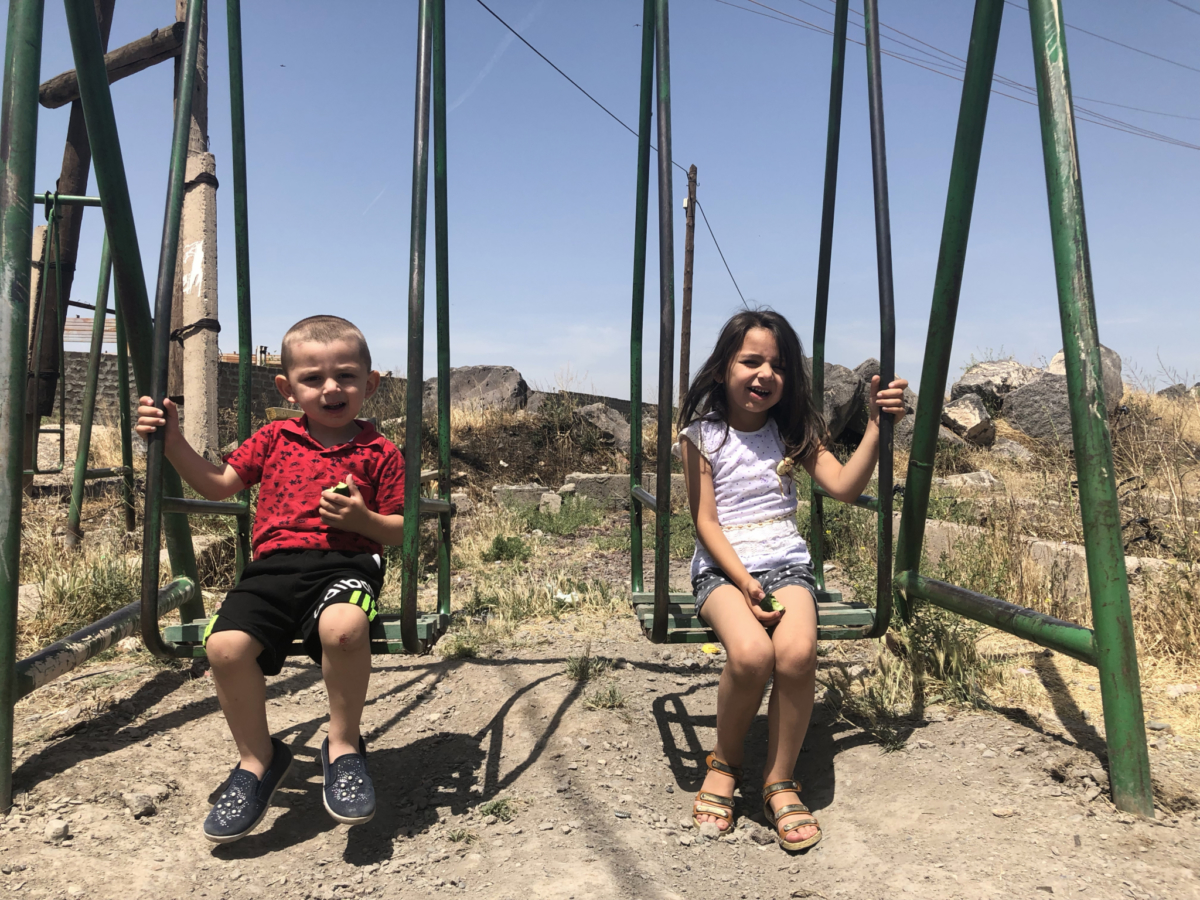 Residents of this building were surprised to hear that a journalist had “dared” to walk to their house and was not afraid of the stray dogs and snakes. 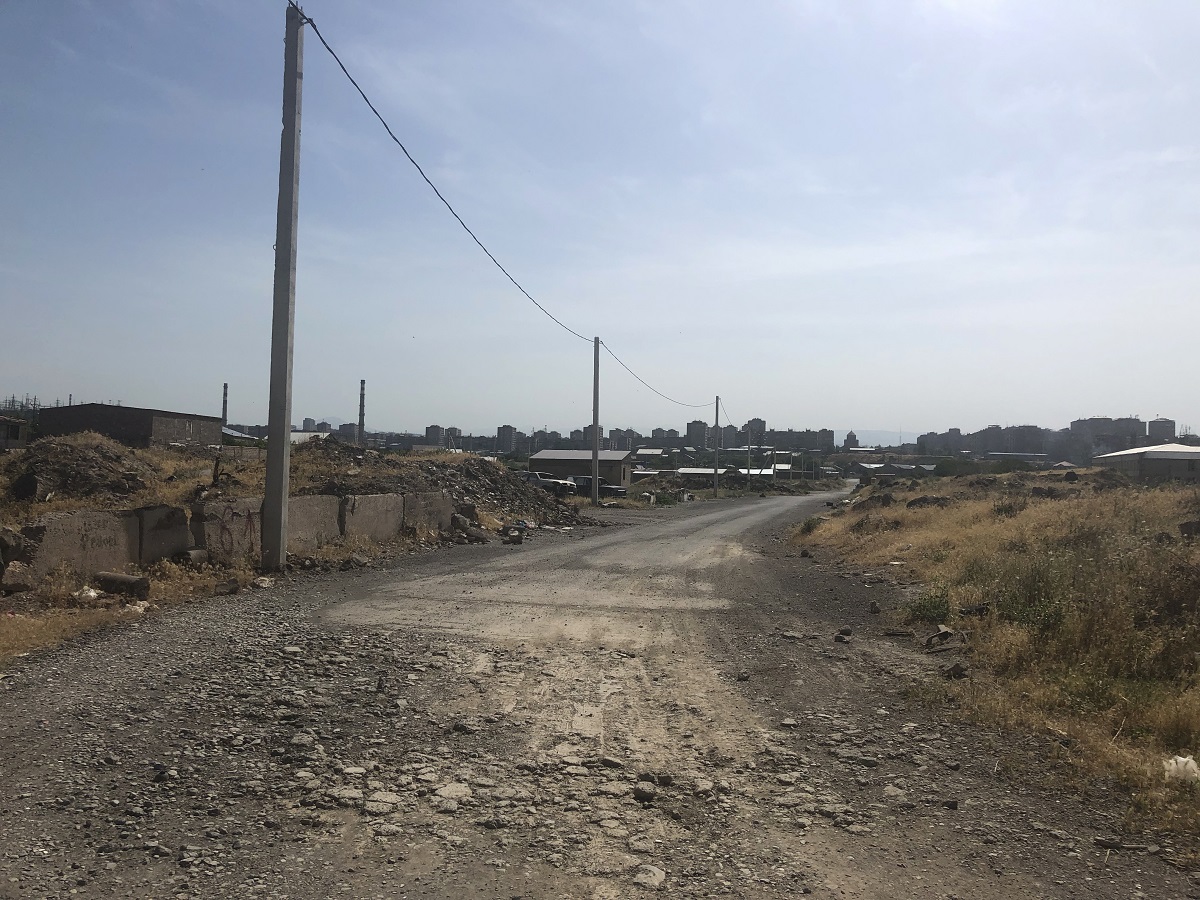 They themselves are afraid to go this way alone. At the beginning of each month, when it comes time to get social benefits, the neighbors get together and go along this road.

The “Martians” are tired of empty promises

Residents of Mars joke that their building is in fact on another planet, somewhere very far from earth.

Nobody moved here of their own free well. Some lost their former housing, while some never had a home to begin with. But they say that, despite the poor living conditions, many of them have found their happiness here, and have created families like Kristine. 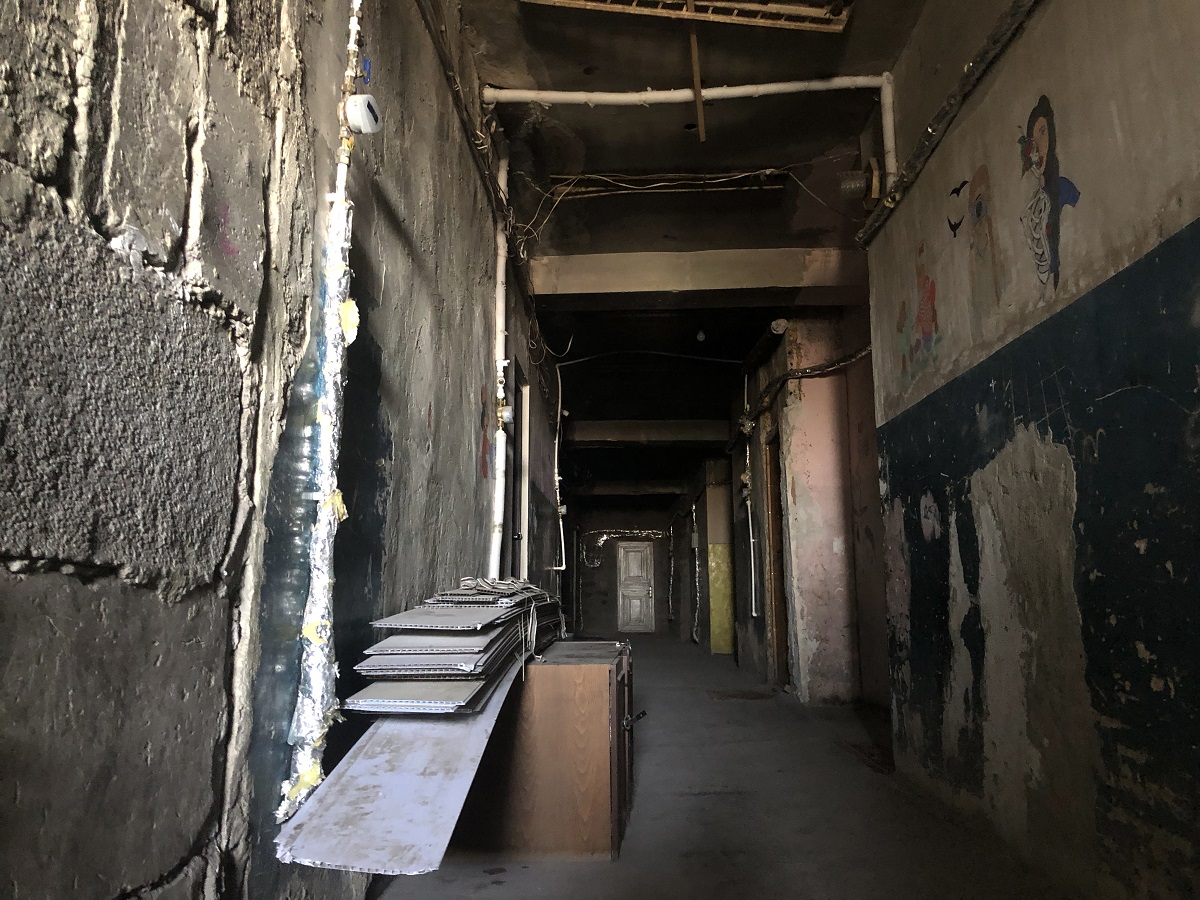 These people are always ready to talk about their problems and needs, the desire to move to another building, to find some kind of solution – if only someone would listen to them.

The residents all say they have already lost hope for change – they have knocked on the doors of all state institutions. The answer was the same everywhere: the building is not under their jurisdiction, therefore they cannot inspect or establish threats to the health of its inhabitants.

Allegedly, settlement of the building began at the suggestion of the Speaker of the National Assembly Karen Demirchyan in 1999.

The factory had been built on his initiative when he was the first secretary of the Central Committee of the Communist Party of Armenia. Demirchyan suggested allowing people who had housing problems to occupy the premises of the building. But residents of the building still have not received the right to own the apartments that they occupy.

When JAMnews tried to obtain information regarding the future of the building, the mayor’s office agreed to meet with its residents.

The residents have also accused of the fact that during the years of residence they had taken “a series of illegal steps,” in particular, they demolished several load bearing walls, which is unacceptable from the point of view of safety.

And thus, the urgent issues went unsolved. Residents were only advised to contact the State Property Management Committee, which has the building on its balance sheet. 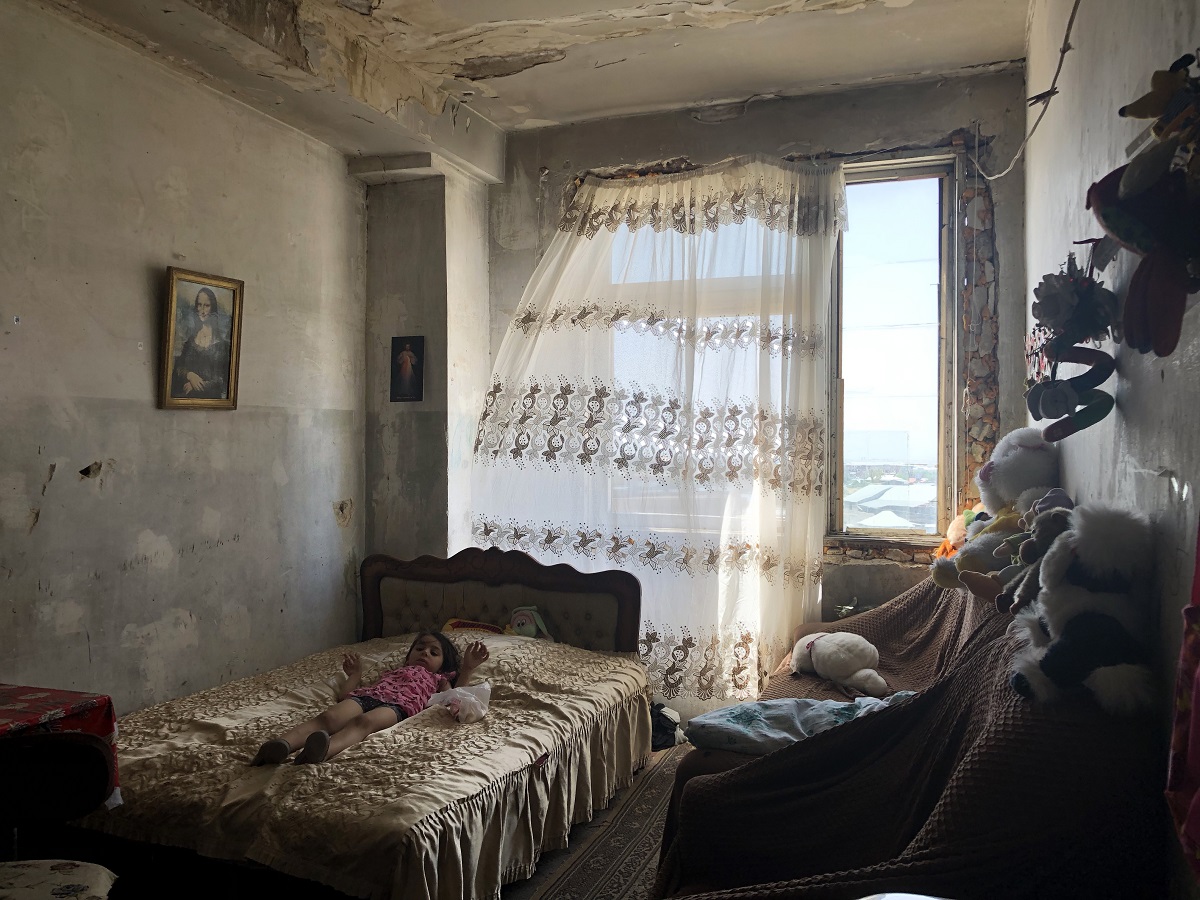 And the committee said that these citizens live here illegally – without the right to property.

They reported that they had repeatedly urged them to voluntarily leave the building, since it was dangerous. However, the calls were not heard – and the reason for them is clear: people have nowhere to go. It also turned out that there is no plan to resettle the tenants of the building by the State Property Management Committee, since this requires a government decision.

It is not known how many people live in such buildings

The most dangerous buildings are those classified as being in the ‘3rd or 4th critical condition. In Yerevan there are currently: 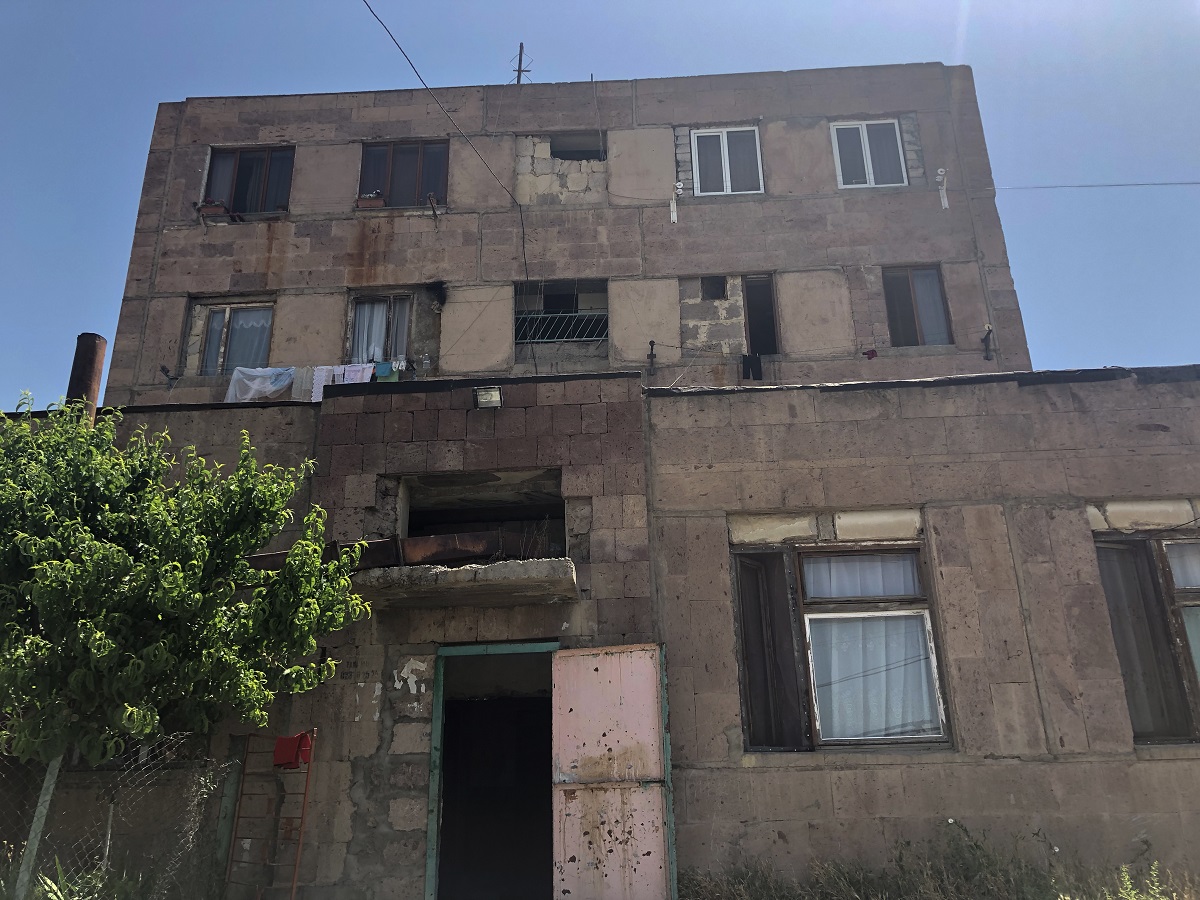 How many people live in these buildings is unknown. The fact is that their number changes all the time. Even a week after a census, the data can change significantly.

Here is one of the buildings of the 4th degree on Chirak Street in Yerevan, which is to be demolished. 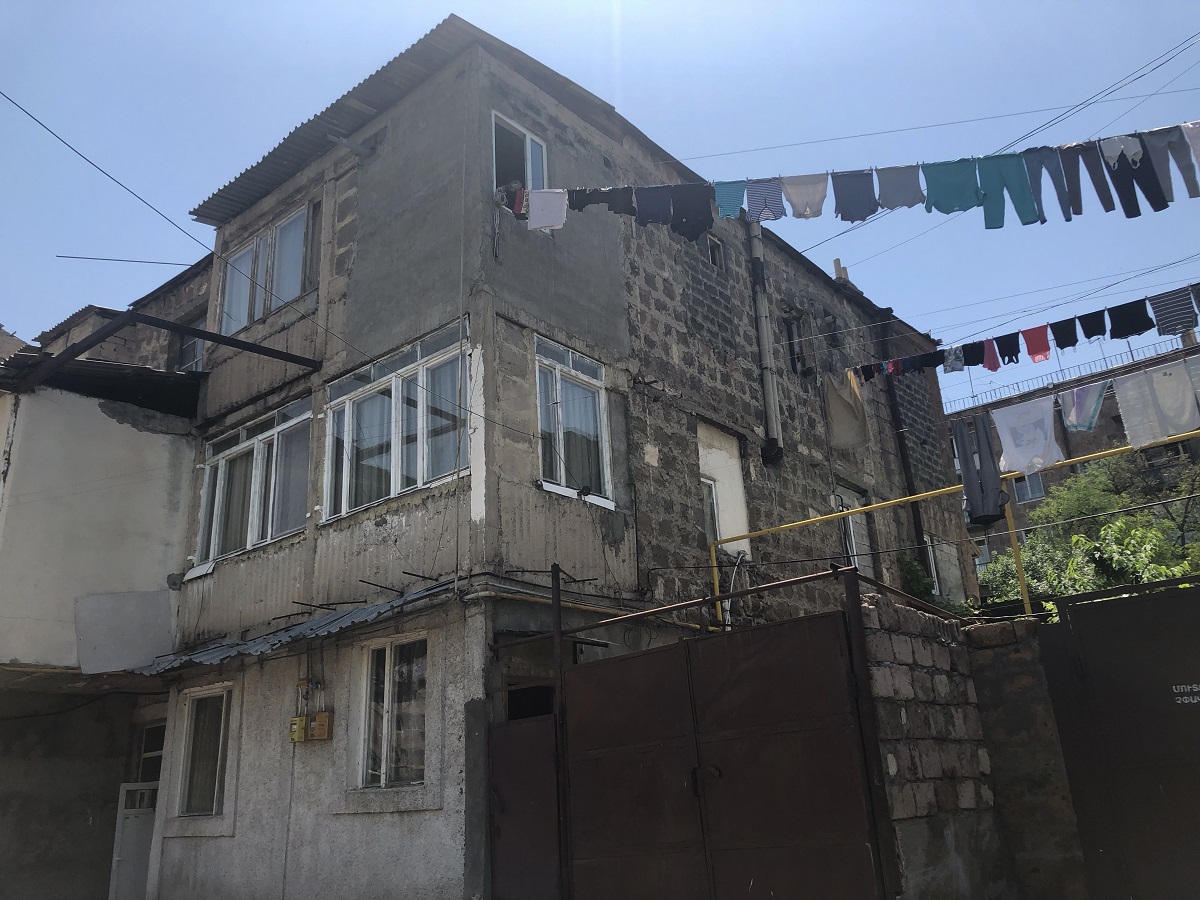 Residents say they have long lost the hope that they will be relocated to another house. A few years ago, the question of their relocation was discussed at the City Hall.

But the tenants and the municipality could not reach agreement on some issues. After that, the state structures forgot about the existence of this building and the project for the relocation of its residents was suspended indefinitely.

The city authorities have been discussing a project to resettle residents of another building located at Artsakh Street 8 – the building is in a  critical condition of the 4th degree.

A few days ago it was confirmed that the majority of families – and there are 81 of them – will be relocated to new apartments with the registration of the right to property.

The rest of the residents will be temporarily settled in apartments for rent, for which the mayor’s office will pay until the construction of the house intended for them is completed.

Then the municipality plans to deal with the relocation of residents of the neighboring critical building at Artsakh 10.

However, it is not known when the problem as a whole will be solved and residents of all dilapidated and dangerous buildings will be resettled. The city authorities have no definite plan or schedule.