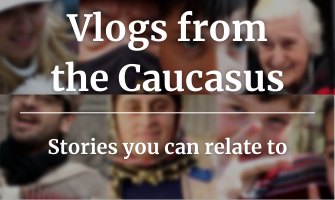 A love story from Georgia

Lexo Chemia and Ani Khubutia are both Tbilisi residents and met in a psychiatric hospital. Ani is a psychologist who did her internship there. Lexo is an actor, and he came to the clinic with a friend, to observe and prepare for a role in a new performance.

Three years later, they got married in a small monastery in a village in the Martvili region. The wedding dress was bought from a local second-hand store.

Soon, Lekso was invited to play a role in a theater in the city of Akhaltsikhe, and Ani went with him and they ended up staying there. For the next seven years, they lived in a small room in the theater building.

Meet the acting couple from Akhaltsikhe:

Tea business in Ninotsminda and a 22-year-old female entrepreneur: How the EU and CENN help youth