"We are talking about a creeping occupation of Georgia, by Russia" - a Georgian youth protest in the conflict zone 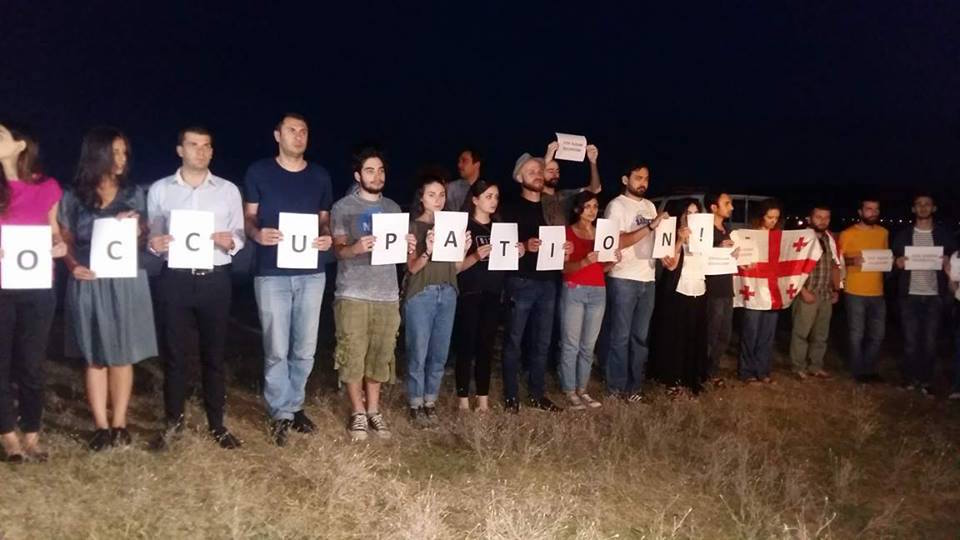 On 14 July an action called “Where the real enemy stands” was staged in the Georgian region of Shida Kartli near the administrative boundary line with South Ossetia. About a thousand young people, mainly from Tbilisi including local residents, protested what they called the ‘crawling Russian occupation’ and called upon the Georgian society and international community to pay attention to what is going on in the conflict zone.

On 7 July a sign was placed on the outskirts of Bershueti on the Ossetian side, informing locals of the state border of South Ossetia. This has caused a strong negative reaction on the part of Tbilisi as well as international organizations involved in the Georgian-Ossetian settlement.

Since Friday morning, students, professors and young activists have been coming to Bershueti by cars and buses and gathering on the administrative border with South Ossetia, holding Georgian and EU flags and singing the national anthem.

“We want to protest the Russian occupation from right here,” Eliso Kiladze, one of the action organizers told JAMnews.

The activists placed their own sign at the border, indicating the distance to the Georgian state border – 101 km.

Jan Kelly, the US ambassador in Georgia, arrived by midday. He talked to the activists and journalists, saying the United States supports Georgia’s territorial integrity and condemns the illegal actions carried out by the Russians.

At the end of the day, the young activists created a human chain along the administrative border, which they called the occupation line. This part of the protest was held as a rebuking response to “Georgian March”, a rally that was underway in Tbilisi at the time whose participants were protesting against what was said to be the “uncontrolled migration” of citizens of Turkey and Near East countries to Georgia.

“We call our protest ‘Where the real enemy is’, and what we want is to tell our fellow citizens and foreign friends that the main problem facing out country is the Russian occupation, not the foreigners who are said to be living in Georgia illegally,” one of the organizers of the protest, Salome Kandelaki, told JAMnews.

Many of the young protesters in Bershueti told JAMnews they believed such protests needed to be held more often, as ‘only loud statements about Georgia’s territorial integrity can remind our friendly nations of the necessity to support our country in its struggle to find justice’.