The fate of a Georgian-Abkhaz war monument in Scotland: to be demolished, altered or moved to Abkhazia?

A small monument in the small city of Kilmarnock in Scotland has become the subject of a petition, round-table discussions and spirited arguments on social media in Abkhaz and Georgian society. 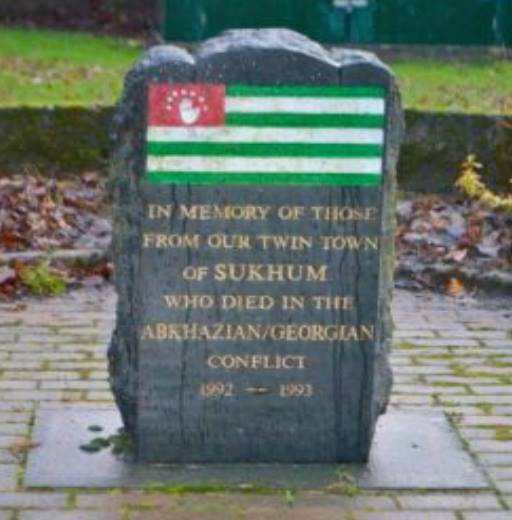 The monument was erected in 1995 and bears the Abkhaz flag with the following inscription: “In memory of those from our twin town of SUKHUM who died in the Abkhazian/Georgian conflict, 1992 — 1993.”

The monument was built because the two cities have been twin-cities since the time of the Soviet Union.

In 1995, the mayor of Sukhum Garri Ayba came to visit the town for the unveiling of the monument. And in return, one of Sukhum’s streets was renamed Scottland street.

But Georgian authorities found out about the existence of the monument only several days ago. The Ambassador of Georgia to Great Britain Tamar Beruchashvili sent an official note of objection to London and it was decided to take down the monument.

Twenty-two years have passed since the monument was erected in Scotland and many have forgotten about its existence. But in Georgia and Abkhaz society, the notice of the imminent destruction of the monument has caused a storm, especially considering the fact that the two nations have little to discuss.

In Abkhazia, a campaign to gather signatures to preserve the memorial has begun and has been sent to the authorities of Kilmarnock and Scottland.

The Ministry of Foreign Affairs of Abkhazia has published a special statement in which it sees the behavior of Georgia in this case as an ‘act of vandalism, aimed at humiliating the historical memory of the Abkhaz nation’.

The statement also says that ‘Tbilisi’s fight against the monument is similar to the burning of the Abkhaz state archives in October of 1992 and the Abkhaz institute of language, literature and history’.

The Ministry of Foreign Affairs of Abkhazia called on international mediators in the Geneva international discussions to ‘give an adequate and objective assessment to the destructive actions of Georgia’.

Many political organizations in Abkhazia have also reacted similarly.

Abkhaz social media has categorically condemned the decision to abolish the monument. Here are some typical reactions:

“Fundamentalists are waging war against monuments, obscurantist vandals, or because they are principled haters of culture. I don’t see a big different between them and the Taliban or ISIS in this case.”

“This is a coherent policy [aimed at] fouling Abkhazia wherever they can. First they tried to prevent children from going to concerts and competitions, now they’re attacking monuments… .”

“What are we seeing?? They’re trying to erase memory. They could at least leave the dead in peace.”

“Next to Kilmarnock there is another village by the name of Moscow. Maybe they’ll take that down as well?”

“Those without strength can fight only against monuments. One shouldn’t get upset. What should one expect from the weak?”

“After taking down the monument, it should be taken to Abkhazia and set up on Scotland street, and inform the Scottish of this. Let them be ashamed. If they have anything of the ‘mountain-people’ in them, I hope they will feel ashamed.”

“The Georgians burnt our archives in the war, now they are destroying our monuments – it is from such cases that the historical memory of a nation is formed.”

The Georgian side says that the memorial will not be taken down. However, its appearance will be changed and then put back in place.

“We simply told local authorities that the memorial contains politicized symbolism and is not in accordance with the politics of Great Britain in regards to Georgia’s territorial integrity. Local authorities agreed with this argument and promised to bring the monument in line [with this]. It is with this aim that the monument will be temporarily taken down, after which it will be put back,” Echo of the Caucasus quoted the Deputy Minister of Foreign Affairs of Georgia, David Dondua, as saying at a meeting organized to discuss this topic.

In Georgia, however, several NGOs have come out against the removal of the monument and many members of civil society are signing a petition that has been initiated by Abkhazia.

“We stand in solidarity with the Abkhaz people that it is useless to fight against monuments in the 21st century. This decision of our government is a direct blow against peacemaking and is not conducive to the regulation of relations – in fact, it’s contrary to this idea and takes us further away from the Abkhaz.

“While we publicly announce our desire to have peace, [this move] shows that we stand against it,” said one of the signers of the petition, Rusiko Marshania to JAMnews.

On Georgian social networks there is an active discussion surrounding the case. Here are a few characteristic comments:

“The fight against monuments, flags and stones indicates the weakness of the Georgian government. Let them do something better – for example, stop the depreciation of the lari.”

“I very much doubt that the reaction of the Georgian authorities to the monument in Scotland will add something substantial to the policy of non-recognition and the principle of the territorial integrity of Georgia. As for trust, on the contrary, this will do great harm. There are matters in which we must be particularly delicate.”

“Let such memorials be put in Russian cities! In a civilized world there is no place for Abkhazians and their memorials.”

“How could the Georgian authorities have allowed so much time for the Abkhaz flag to fly in Scotland? If we turn a blind eye to such facts, then the Abkhaz flags will appear everywhere and the civilized world will get used to them, get used to the idea that Abkhazia is not part of Georgia.”

“I think that the restoration of trust will be possible only when the parties will take principled positions. Our position is that Abkhazia is part of Georgia. Their position is that Abkhazia is an independent country. Therefore, do not … call them brothers and sisters. One must realize both one’s own and another’s sense of dignity. They have, like us, gone through the war, and we are all traumatized by it. This is what we need to realize – and only then can we talk about restoring trust.”