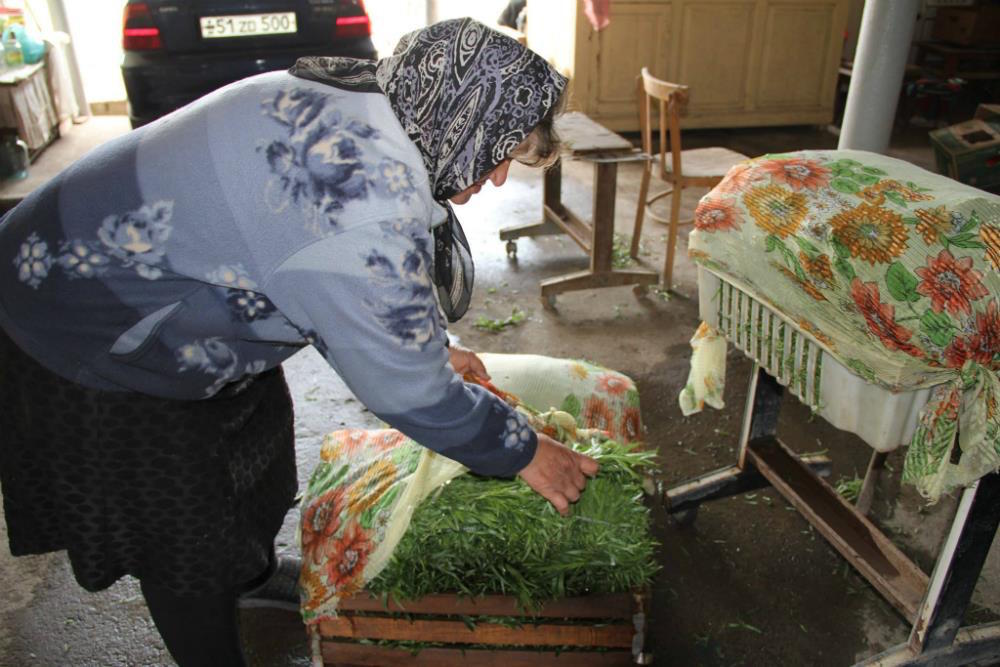 Ararat Valley villages are gradually shifting to the cultivation of certain individual crops, where each village specializes in a particular crop. The villagers choose the crop without professional consultation, estimating the demand, productivity and profitability by themselves.

Aragats specialize in the cultivation of garden crops, namely, tarragon [estragon]. Some 10 years ago, the cultivation of tarragon was regarded more as a means of additional income, and not everybody was involved in it. But then the demand for it increased, and the number of tarragon seed plots started gradually growing. It came to the point where the villagers, who emulate each other, gave up on the cultivation of other crops and started planting just tarragon. As a result, 90% of the arable areas in Aragats village are now covered with tarragon. That lead to a situation where the demand exceeded the supply, and the resulting imbalance only correctable by changing the pricing policy – to the detriment of the producer.

In Aragats and the neighboring communities, tarragon is cultivated by transplanting seedlings in greenhouses twice a year. The crop is harvested two months after it is planted, once every five days over the course of 60-70 days. If it is not harvested in time, the plant hardens and becomes unsuitable for use. Leva Ambartsumyan, an Aragats village resident, has been cultivating tarragon for 20 years. In his words, they had no problems selling greens when they were cultivated in small quantities. The harvest was sold at the local market, then separately in the capital. A bundle of tarragon used to cost 150-200 AMD [about 40 cents]. However, prices sharply dropped when the whole village started cultivating it.

Suren Matevosyan, an Aragats resident, has estimated that approximately 30 thousand bundles of tarragon can be gathered from a 1000 sq.m. area, at best. Taking into account the costs of greenhouse construction, planting the seeds, fertilization, irrigation, picking the greens and making bundles, the manufacturing price of one bundle of tarragon is approximately 10 AMD. If one bundle is sold for 25 AMD, income received from each bundle will amount to approximately 15 AMD, i.e. 500,000AMD [slightly more than $1000] for all the bundles. That is without taking into account the physical labor of the whole family. The farmers think it is unprofitable to sell a bundle for less than 25 AMD.

Georgians are the major consumers of tarragon

Georgian consumers import untold amounts of tarragon. Suren Matevosyan has been selling tarragon to Georgians for 10 years already. According to him, since Georgians are well-aware of the limited period of harvesting and the sale of crops, they often dictate their own conditions, sometimes even contradicting common sense. For example, when the farmers refuse to sell greens at a lower price, their clients make arrangements between themselves not to buy tarragon for several days. When the greens marketability is at risk, they offer an even lower price, for instance, 17 AMD per bundle. Suren says there were years when the tarragon price was no more than 12 AMD.

Emzar Arkhamaia, a Georgian consumer who has been exporting goods to Aragats for 20 years now, says that greens in Georgia are not expensive and are sold at 30-40 AMD depending on their demand. In Emzar’s words, the prices they offer Armenian farmers are determined by the prices of the greens on the Georgian market.

Moreover, the purchased goods come to the Georgian market after having passed through the hands of at least three resellers. Apart from the cost of tarragon, a purchaser also has to cover its transportation expenses, as well as to buy ice in order to prepare the tarragon for transportation and deliver the greens in good condition.

The main problem is a lack of coordination

Aragats residents do not want to offend Georgian clients; it is impossible to sell the crop on the domestic market, whereas Georgians export about 6 tons of tarragon daily. Ashot Kamavosyan, the chief of Aragats village, believes that the main problem is a lack of coordination and planning when cultivating garden crops in the village. Due to this, the product often lies around unsold and becomes spoiled. Kamavosyan has already decided to make arrangements with villagers in order to increase the amount of potato and cabbage cultivation areas. Levon Ambartsumyan has already decided that, after harvesting the tarragon crop in July, he will plant half-ripened potatoes. He says that all villagers should try to divide their lands into plots and cultivate different kinds of crops. As a result, they will be able to rotate the crops, and the areas covered with tarragon will be reduced. Consequently, this will result in the increase of both its price and the profit made from its cultivation. According to Ambartsumyan, if there were agronomists and consultants in the villages, it would be possible to make proper estimates and distribute the land plots for cultivation of different crops in the correct manner. Since there is no such position in village administrations, farmers follow their neighbor’s suit and cultivate the same crop. And the cycle continues.