People who cannot return from war – is it possible to leave PTSD in the past?

The last war in the Caucasus was the outbreak of full-scale hostilities in the Karabakh conflict zone on April 2-6, 2016.  It went down in history as the “April War,” or the “four-day war.”

It was the largest and bloodiest flare up since the armistice in 1994. According to official figures, in those four days more than 200 people died on both sides.

The Karabakh war is an armed conflict between Armenians and Azerbaijanis that took place in 1991-1994 in the territory of the former Nagorno-Karabakh Autonomous Region of Azerbaijan and its surrounding regions. The war ended with the signing of a truce, but skirmishes periodically continue.

The Nagorno-Karabakh Republic, inhabited by Armenians, exists as a de facto independent republic, not recognised by any state in the world, including Armenia.

Azerbaijan considers Karabakh and the territories around it occupied during the war occupied, and demands their return.

Negotiations to resolve the conflict through international mediation have so far failed.

Post-traumatic stress disorder (PTSD), remain an urgent problem for conflict veterans in Karabakh on both sides.

JAMnews correspondents talked about this issue with veterans and psychologists in Azerbaijan and Armenia.

When the Karabakh war broke out, Qasim was working in a mosaics decoration workshop. He had a diploma from a prestigious Baku university in the specialty and experience working on oil platforms in Turkmenistan.

Officers were desperately needed, and universities had implemented a military training course, so that in addition to a diploma, students received the rank of lieutenant.

The training course for Officer Qasim was completed in just a month and a half – instead of the required couple of years – and went to the front as the commander of an anti-tank crew.

“I remember how we came under mortar fire. We all hid somewhere.  I jumped into the pit. Explosives fell around me. Out of horror, I buried my face in the ground, covered my head with my hands. There was only one thought – for it just to end faster.

When the shelling stopped, I could barely get up – my muscles were numb with tension.  I myself didn’t hear it, but it seems I was screaming because my throat was very sore.”

Qasim had to participate in heavy battles, to see his fellow comrades die. The fighting ended in 1994, but he returned home only in 1996.

One month after returning home, Qasim woke up at night with a strong sense of anxiety and screamed, frightening his relatives.

“I calmed down a little and fell asleep, but not for long. The fear returned, again I was screaming in horror. I left the house, but I did not want to go anywhere. The whole next day I rushed about and did not know what to do, but at night I wandered around the city again, wearing myself out to sleep.”

Qasim went to the hospital, where he was observed by various doctors – psychotherapists and neuropathologists.  No one understood what was happening to him, at first he was treated for a long time for a neurosis.

Qasim turned to a psychologist who, he was told, studied in the United States.

He advised sex and sea air.

Then he came across a young doctor who made the correct diagnosis and prescribed medications.

“I felt better when I smelled my uniform. The doctor advised me to put it on and go for a walk. I loved going into the woods outside the city.  Its smell reminded me of Karabakh, pulled me back. I could lie in the field for a long time and watch the trains passing nearby.”

War nostalgia is one of the symptoms of post-traumatic disorder in veterans.  Other symptoms include depression, communication difficulties, headaches, insomnia, suicidal thoughts and aggression. 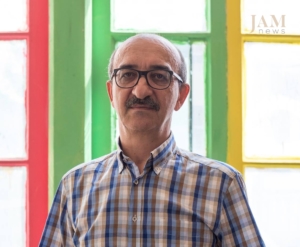 Azerbaijan has never had a state programme for the psychological rehabilitation of Karabakh war veterans. As psychologist Azad Isazade says, then the country simply did not have qualified psychologists.

Veterans were treated by neuropathologists and psychiatrists, and then individually.  The number of people cured can be counted on a few fingers.

According to Isazade, post-traumatic disorder is best treated while it is still “fresh” so that the soldier can adapt to a peaceful life and not get a second injury from returning to it.

“A veteran returns from the trenches and finds himself in a completely different reality: the city shines with bright signs, people go to restaurants. He has to deal with misunderstanding on the part of people or the state, on the part of loved ones. It’s easier for them at the front: it was clear who was a friend and who was a enemy, there were clear tasks.”

Isazade says  says that people with a strong psyche can safely survive stress and become, for example, professional servicemen or return to a peaceful life.  But for some, PTSD can manifest itself after a rather long time.

According to Qasim, walking around in military uniform did not help for long.

“Once I looked at myself in the mirror and I was scared. My face had changed from nervous exhaustion. I used to be a foodie, but now I could not even taste food. Before the war, I loved music, and after that I couldn’t listen to it for even ten minutes. All of it  annoyed me, and I did not want anything, I had obsessive thoughts about suicide.”

After six months in the hospital, all of Qasim’s money went to expensive drugs.  He tried alcohol, but it did not help him to relax. His family did not support him, his girlfriend left him, saying that she was afraid of him.

“I was annoyed by the careless attitude of my loved ones. My father told me: “You are a man!  You are an officer! How can you scream, cry ?! I really wanted him to just pat me on the back, reassure me.

“Once my nephew from Russia called. He offered to move me ot Perm. My father was already so tormented with me that he didn’t mind.”

In Perm, Qasim, on the advice of his nephew, settled in a dormitory at a man’s monastery in the middle of forests, where everyone could get free food and a roof over his head in exchange for help with the housework.

Fresh air, natural food, concoctions of herbs, moonshine from berries, silence and the peace of the monastery helped Qasim to end the war within himself. The veteran returned to Baku two years later.

“The main problem of veterans in Azerbaijan,” Gasim says, “is that it is not customary for us to turn to psychotherapists for help, we are ashamed even to talk about this with our relatives. We had no one to even ask for help. It’s good that there is the Internet now, you can find help on sites, on forums there are a lot of people who also suffered.  But we need to talk about this disease.”

Elshad Rakhmanov also suffers from the consequences of the war, but, unlike Qasim, he was not able to get rid of anxiety and aggression.

Elshad works at a construction site, lives with his mother in a one-room apartment, and hardly communicates with anyone. He and his two brothers participated in the war.

The eldest died, and Elshad and his second brother were injured. Fragments of the war still pop up.

Elshad says he does not regret that he was at war, but says that it forever changed him – and not for the better.

“When I tell someone what I’ve experienced there, they look at me like a madman, like a beast,” says Elshad.

25 years after the Karabakh war, veteran Daniel Grigoryan is still irritated by loud sounds and bright lights. Often when he is watching movies, he finds himself on the battlefield, in the early 1990s.

He was 17 when the war started.

“We did not imagine what war was.  We could not, we were teenagers. We thought it was something ordinary,” says Daniel.

Many of the men with whom he fought in the same unit died. For those who survived, it was difficult to reconcile with the loss of friends.

The detachment returned from the war only after the armistice in 1994.  And then Daniel had to learn to live in peaceful conditions again.

“It was difficult.  I couldn’t get used to it.  All the time I wanted to return.  Our [dead] friends remained in Shaumyan [Azerbaijani territory].  We wanted to return for their bodies. This thought still torments me,” says Daniel.

People who have been living in border zones for the past 25 years and, as a result, are more or less participants in the war, are constantly in a state of stress, psychological and nervous tension.

In the post-Soviet period, it was not customary in Armenia to turn to specialists with psychological problems. And now few people go to psychotherapists.

The participants of the “first” Armenian-Azerbaijani war – that is, those who participated in the hostilities in the early 90s, did not receive specialized psychological assistance.

Although in those years a psychological rehabilitation center was created for them, it was practically inactive due to the lack of trained specialists and because of the skepticism of people.

Stereotypes did not allow the participants in the war to soberly assess their psychological problems and even more so – to turn to doctors for help.  Many of them allegedly received treatment at a stress center, but it was very formal in nature. People came to the clinic just to get a degree of disability, and thus benefits. 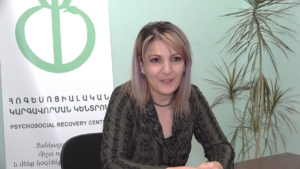 Karine Tatryan, a Ph.D. student and associate professor of the Department of Psychiatry of Yerevan State Medical University says  that in the past, this syndrome was called the Vietnamese, Afghan or Chechen syndrome.

“These symptoms were observed in people who experienced stress in wartime.  Further studies have shown that this syndrome occurs not only in combatants, but also in all those who are faced with a threat to life – terrorist acts, torture, violence,” the psychologist explains.

In people who survive such injuries, even after many years, noises, car signals, fireworks or human crying continue to cause fears, panic attacks, and obsessive thoughts.

The psychologist says that people with post-traumatic stress constantly live in the expectation that the event that once shocked them can happen again at any moment.

“It’s best to consult a specialist, because post-stress disorders are problems that only get worse over time,” says Karine Tatryan.

In Armenia today, treatment of post-traumatic syndrome is offered by only one specialized clinic – the Center for Psychosocial Rehabilitation.

Psychological assistance can also be obtained at the rehabilitation center, where participants of the April War of 2016 [four days when large-scale military operations took place for the first time since the 1994 armistice] are treated.

Hayk Torosyan was a participant in these April events.  He became the first wounded from the Armenian side. The injury was incompatible with the service, and 80 days after the draft, Ike returned to civilian life.

“This situation is not particularly discussed in our family.  But forgetting all this is impossible. This will stay with us forever”, he says.

Immediately after returning to a peaceful life, Ike received psychological help.  He believes that this helped a lot, although he still has a lot of anxiety.

He continues to be treated while walking with difficulty. But he is sure that he will overcome everything. After the war, Hayk decided for himself that life goes on, he entered Yerevan State University, and is now preparing to become a social worker.  He explains that the choice of profession is not accidental: he wants to help people, as they once helped him.

Produced with the support of the Media Exchange