The Egyptian Parliament has launched an investigation into the humiliating defeat of its national team at the World Cup 2018, Al Arabia TV reported.

The investigation is led by the Committee on Youth and Sports of Egypt’s Parliament. A number of questions by Egyptian MPs’ have been addressed to the President of Chechnya, Ramzan Kadyrov.

The Egyptian team was taken out of the tournament after losing all three matches of the group stage and finishing last.

Members of the Egyptian Parliament are interested in the reasons behind the national team’s decision to set up base in Chechnya and train at the stadium in Grozny, when all the stadiums the Egyptians had to play in were far from Chechnya.

The committee is interested in reconstructing what actually happened in Chechnya. Why did Chechen President Ramzan Kadyrov attend the Egyptian national team’s practice? Why did the best football player of the team, the forward for the English club Liverpool, Mohamed Salah, suddenly receive an honorary citizenship of Chechnya and directly from Kadyrov himself? How did Salah and the other players find themselves at a festive dinner at the presidential palace?

“Salah’s career and reputation in England has been dealt a blow,” Al Arabia quoted an Egyptian MP.

Mohamed Salah, the 26-year-old Liverpool striker who became the top scorer of the English championship is a legendary figure in his homeland. Therefore, the scandal in which the striker found himself became a very sensitive topic in Egypt.

CNN news, referring to sources close to Salah, reported on 26 June that the football player is ready to leave the Egyptian national team because he felt implicated in the political processes in Grozny. The same information from two sources from Salah’s circle was distributed by the Associated Press agency.

Information about the possible departure of Salah from the team was verified by the football player’s lawyer while talking with BBC Egypt. The lawyer told the BBC that he was not ready to comment on the situation, though he did not refute the rumors.

How did Salakh find himself in Grozny? 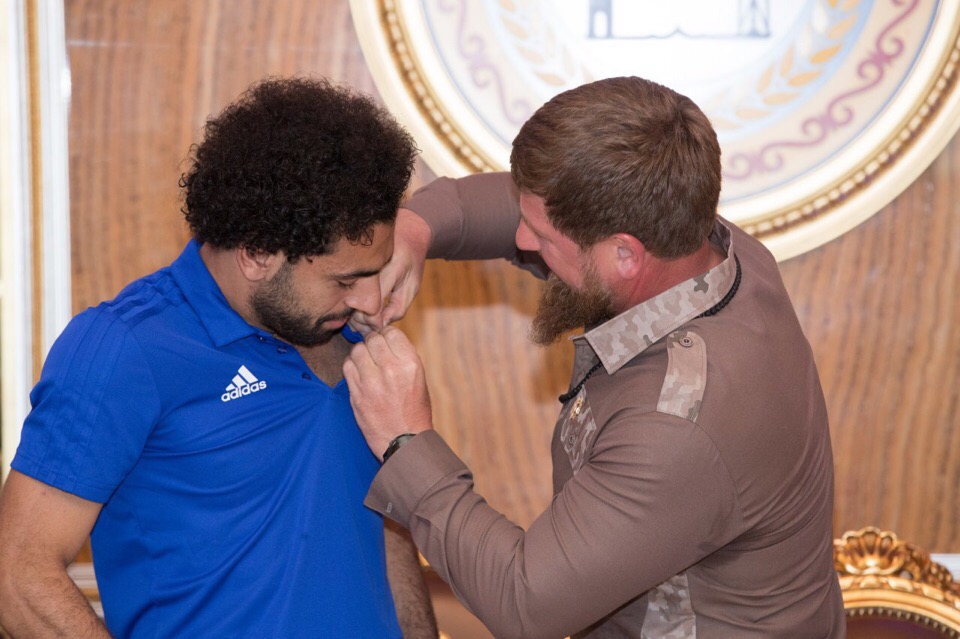 All teams participating in the World Cup games in Russia are affiliated with a stadium where they train and prepare for matches. The Egyptian Football Federation has chosen Ahmad Arena in Grozny, the capital of Chechnya, for its national team. This was a strange choice, since the championship games are not held in Grozny and the city itself is thousands of kilometres from the Russian cities hosting the matches.

International organizations immediately criticized the decision of the Egyptian federation such as Human Rights Watch which stated that Kadyrov will certainly try to use Egyptian football players to improve his image. The arrival of the Egyptian national team in Grozny presented an excellent gift to the Chechen authoritarian president.

Salah’s strange adventures in Chechnya began when the plane landed at Grozny airport. The next day joint photos of Kadyrov and Salah were going viral in the media and on social networks.

Kadyrov attended the Egyptian national team’s practice sessions at the Ahmad Arena and filled his Instagram account with photos of him with the players of the team (the Chechen leader’s favorite social media tool is Instagram).

New York Times wrote that, before one of these photoshoots, Salah, who was resting in a hotel room after a long flight and who had decided to skip practice that day, was woken up and whisked away in Kadyrov’s personal car to the stadium so that the Chechen leader could be photographed with him.

The next surprise was awaiting Salah on 15 June on his birthday. After the defeat by Uruguay, the Egyptian team returned to Grozny to find a 100-pound cake decorated with a gold boot in their hotel lobby.

According to the Russian television company NTV, the impressive cake was allegedly a gift by Chechen fans.

On 22 June, the players of the Egyptian national team were taken to the Grozny central mosque where they prayed with Kadyrov, after which Kadyrov invited the entire national team to the presidential palace for a festive dinner. In the evening, Kadyrov awarded Salah with honorary citizenship of Chechnya. Sources of The Associated Press claim that this was when Salah’s patience ran out. Allegedly, the footballer expressed dissatisfaction with the fact that he was drawn into politics and used for political purposes.

Salah has not commented on rumors about a possible withdrawal from the team. Such a decision would strike a strong blow to the feelings of Egyptian fans. On the other hand, Salah will have to answer to British fans about his Grozny adventures. Kadyrov’s image, his intolerance of dissent and methods of fighting ideological opponents can have a negative impact on Salah’s English career. The British press is already standing by to lay into the Egyptian football player.

Refugees in Armenia: New Year in an Arab family