The International Festival “Khibla Gersmava invites you began in 2001 and has been held in Abkhazia every year since then. In 2014 it was also held in Moscow at The Stanislavsky and Nemirovich-Danchenko Moscow Academic Music Theatre and The Grand Hall of the Chaikovsky Conservatory.

In 2015 the 14th festival was hosted by the famous Musikverain from Vienna and in 2016 by Sankt-Moritz from Switzerland.

The 15th Festival was meant to be a special event in terms of the venue and the program, which resulted in the tickets being in high demand.

“Medea was a sensation indeed. The Dioskura Embankment at the “Sukhum castle State Cultural Reserve was chosen as the venue for the 15th anniversary of the festival, and the program of the concert was to consist of two parts. By the end of July a “land improvement program” was begun on the interior of the castle.

More than 900 tickets were put on sale at The Russian Drama Theatre starting on July 12. Long before the opening, a crowd gathered and quickly grew. By midday tickets were completely sold out.

Later, a massive screen (3 by 4 meters) used to broadcast “Medea was installed at the Sergei Bagapsh Square named after the second Abkhazian president.

On July 28 by the end of the day 12 trucks had brought all the necessary equipment to the venue.  In the morning more than 30 people were busy organizing the stage, while another 30 were mounting the seats for a thousand plus spectators.

Khibla Gersmava came in person to inspect the site. She recognized that the place indeed had a “scent of magic”.

The festival has become the talk of the town on the news and social media. Instagram in Abkhazia was full of new photos of the venue taken from unexpected perspectives. 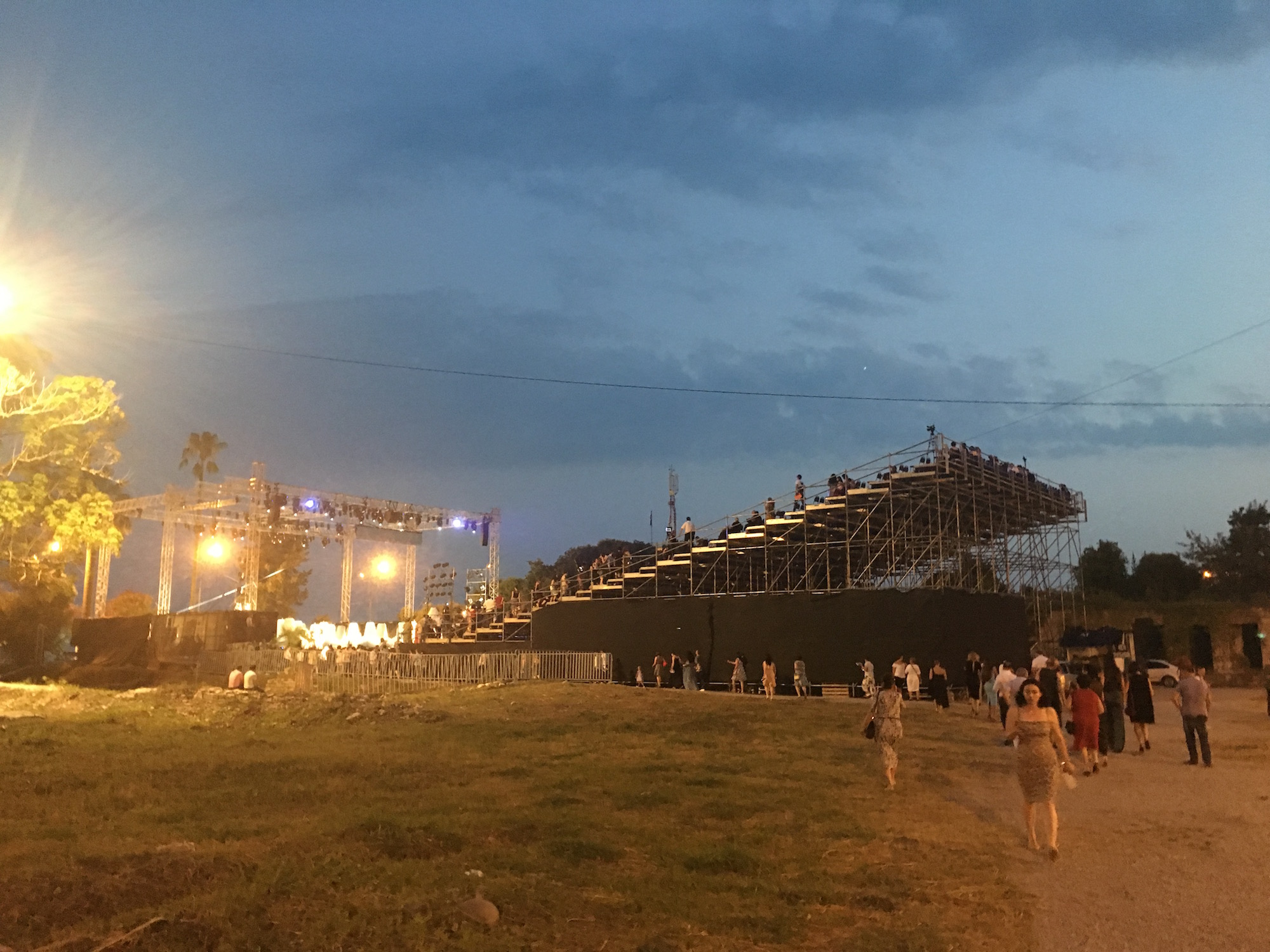 A little help from nature

On August 3, spectators started gathering on the Dioskura Embankment long before the beginning of the performance. The amphitheatre was constructed on a hill to allow a good view from every seat. The sun, the skies and Dioskuria served as a continuation of the stage. It would have been easy to lose the sense of time and place be it not for the flashes of cameras and a drone flying over the spectators.

“The Argonauts are back – announcements for “Medea stated. The opera by The Stanislavsky and Nemirovich-Danchenko Moscow Academic Music Theatre was awarded two nominations at the prestigious “Golden Mask Festival in 2015, with one of them going to Khibla Gersmava for best lead. Later, she presented this award to The State Museum of Abkhazia.

The opera, directed by Kerubini, takes place in the 20th century with real ships sailing behind the stage as if one of them has brought Medea to the kingdom of Kreont for the celebration of Jason and Glavka.

Medea, a Kolkhid witch does not intend to let Jason marry Glavka. That is what she shouts into the skies at the end of the first act. Suddenly the skies responded with raindrops. The stage became slippery and the microphones started to lose their crispness.

It was clear that heavy rain was to follow. However, spectators were reluctant to leave the amphitheatre. Some took out umbrellas. Cameramen put covers on their cameras but were obviously determined to keep on shooting. Two women in front of me refused to leave their places in order to keep the seats dry until when the show would be resumed. There was no doubt that it would be resumed.

The minister of culture Elvira Arsalia, without an umbrella, was pacing back and forth in the amphitheatre, while Khibla Gersmava was standing behind the stage and Felix Korobov was addressing the musicians at the embankment.

Half an hour later there was an announcement that the show would be continued at The Abkhazian Drama Theatre.

Men went to help the musicians with the instruments the rest started calling relatives and friends to inform them of the change of venue. “All to the Drama Theatre!”

Girls in evening dresses and high heels and what was left of their hairstylings were running along the embankment.

The Drama Theatre was not quite ready for either “Medea or for the rain. The sound and lighting equipment had to be reinstalled and to bring out the sound of instruments.

A half an hour later the roof collapsed. Jumber, the electrician, had to be found in order to save the spotlights from being inevitably short-circuited.

The choir, the orchestra and Khibla Gersmava, under the drops falling from the roof, looked like the masterpiece of a surrealistic author.

“We are fine, but we are a little ashamed of what happened like it is our fault. Who said opera cannot be a capello? We should still try – one of the Argonauts sitting at the table behind the stage said. He was supported by a fellow Argonaut, “Is it true that nobody has left? We will play to the end; it is our promise.

By the time the volunteers had brought the instruments to the stage, Jumber has also been found, and the spotlights went down on the stage.

At 1 a.m. Alexander Titel, the creative director of the Stanislavsky and Nemirovich-Danchenko Theatre addressed the audience. “The skies are against us. Maybe Medea herself is to blame. We must wait a little and we’ll carry out the performance nevertheless without the instruments.

The second act began after a 3-hour break. Then the third one followed it with no interruption. The storm continued accompanying the musicians as if Sukhum has suddenly turned into Venice.

I saw the two Argonauts who had been ashamed of not being able to complete the show. One could easily see that their happiness was genuine.

The Drama Theatre heard the final applause before morning. Making it home, the spectators had also been partly transformed into Argonauts. But that is another story.

Lynx pounces on trainer during circus act in South Ossetia