A total of 116 founders of robotics and artificial intelligence companies are calling on the United Nations to ban autonomous weapons.

“Once developed, they will permit armed conflict to be fought at a scale greater than ever, and at timescales faster than humans can comprehend. These can be weapons of terror, weapons that despots and terrorists use against innocent populations, and weapons hacked to behave in undesirable ways,” the letter says.

Experts believe the world is standing on the brink of the appearance of autonomous weapons. 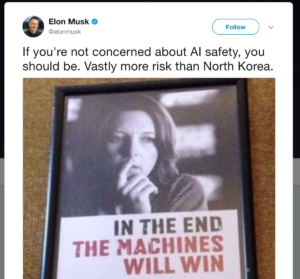 Elon Musk tweeted: “If you’re not concerned about AI safety, you should be. Vastly more risk than North Korea.”