Georgian student: “Americans are taught to think freely in schools”

For thousands of high school students, the exam season has begun. JAMnews spoke with Giorgi Orkodashvili, a Georgian student who studied in an American school for a year. He talked about his life in America, shared his experiences of living there and how the American system of education is different from the Georgian system.

Why I decided to study in the United States 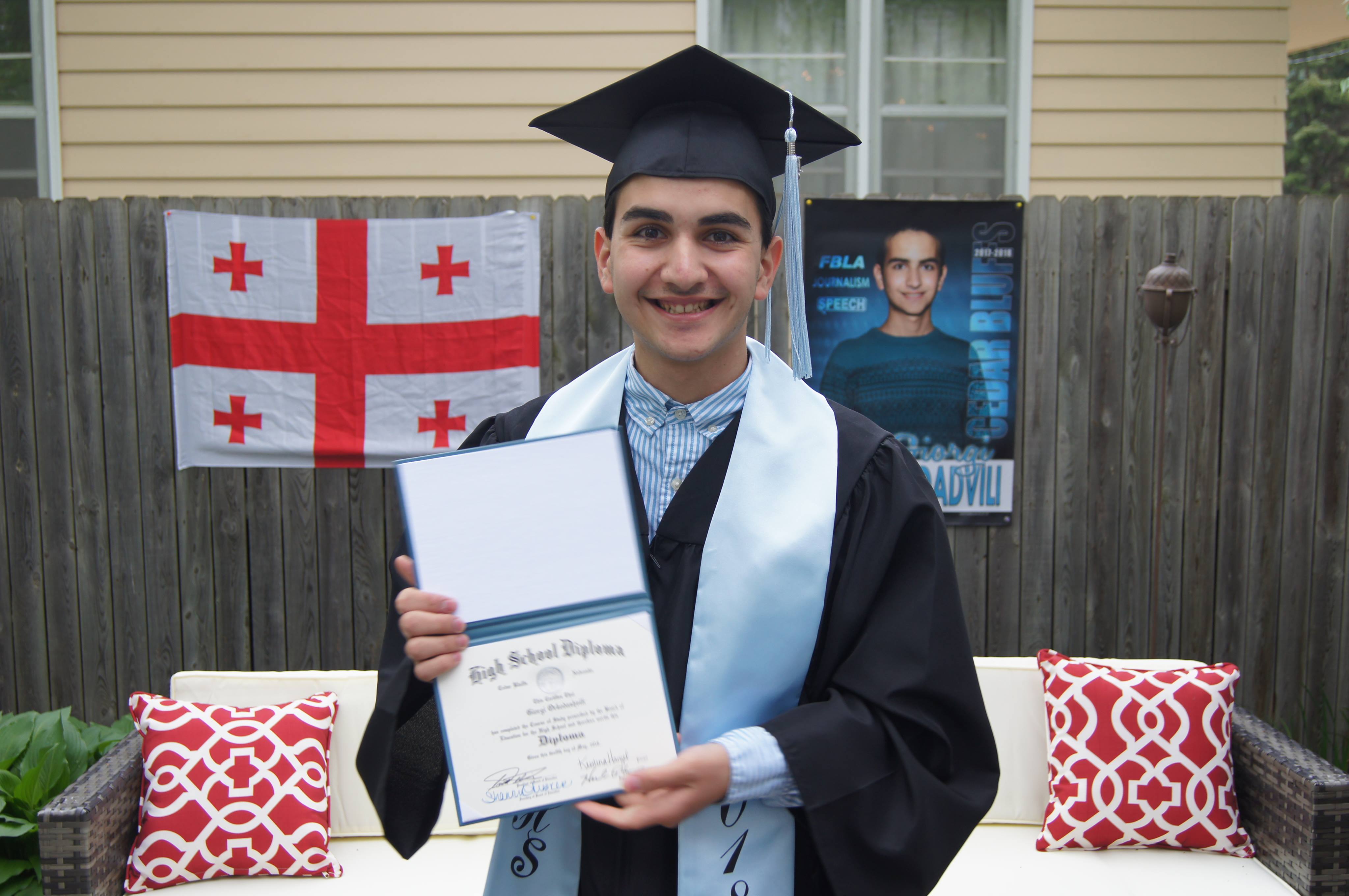 I studied at public school No. 1 in Telavi. I liked Geography the most because I like to travel, and this field gave me the opportunity to have something of an understanding of different countries and cultures.

I started to study English from the age of six. Back then they told me that English would help me get ahead in life. I was still studying in elementary school when one of my relatives went to study in the US. That’s when I set a goal for myself – to go study in America.

Another memory from my childhood, is of a graduation ceremony which I saw in an American film. It was festive, everyone was in the same clothes which, I would find out later, is called a cap & gown. Before the film, I had never seen such a set of clothing anywhere. I remember how I used to dream about putting one on. I fell in love with the country at that exact moment.

In 2008, the Russian-Georgian war broke out. I was young, but at the time we frequently heard how the USA was an ally of Georgia, and we had a lot of hope.

Gradually, my desire to go to the United States grew into a real dream. As I got older, my desire to do so only grew stronger because I had found out more about the US and its education system, and I wanted to experience it for myself. What was most interesting for me was that students could pick subjects that were interesting to them. That was something I didn’t have in my school back in Georgia.

I found out about the FLEX programme from one of my friends. It allows young students from across the world to study for a year in Georgia. I made my first attempt in the 9th grade. I was afraid. I didn’t have high hopes, but I decided to try. I got past the first three stages, but didn’t make it. However, I immediately decided after I got over my first defeat that I would try again. The second time didn’t work out either – I got past the first three stages again, and after five months of waiting (you only receive the final answer after five months) I was rejected again.

I was probably the most heart-broken person in the world. The first week after being rejected was one of the hardest in my life. According to the rules of the programme, I had one last try – my third. I did not want to try again, but once my bitterness passed, I reconsidered, having understood that I would regret it for the rest of my life if I didn’t try one last time. A year later, I again made it past the first three stages and then the five-month waiting period came around.

On the morning of 14 March – vacation time – I woke up later, and got a message from a friend who told me that the results were starting to come in. Twenty minutes later I received a phone call in which I was told that I was going to study in the United States for a year. An indescribable feeling came over me.

American schools are all different from one another, because there is little interference from the government or state in the internal affairs of a school. Schools and teachers have quite a large amount of freedom when it comes to putting together a curriculum. They decide themselves what they want to teach, what the school year looks like, how exams are given and so on.

Freedom is a very important word in America. Freedom of choice is not something only teachers enjoy. Starting from the 9th grade, students can choose their own subjects. Moreover, in America, there are many other subjects to study – and practical ones at that. I, for example, studied Personal Finance Management, Communications, and how to conduct oneself at an interview. I learned how to create a CV and motivation letter. I also chose a subject in which the constitution of the USA and human rights were the main focus.

Over the last year, I came to a conclusion about the American education system: It doesn’t matter what subject a student takes, when studying a subject he or she will still receive some kind of knowledge. The education system is built in such a way as to develop skills in students that are necessary for studying in the future and that will allow them to find a profession.

For example, in Language and Literature class we didn’t simply study works – we learned to write and to argue our positions and creative thought processes. We learned to draw conclusions based off of what we read and to assess facts and analyse them.

In mathematics class, apart from Algebra and Geometry, we studied how to solve problems and how to find solutions. In other disciplines this was true as well, and this is how the American system is different from that of the Georgian system. The main aim of American schools is to give students important life skills and to allow them to form a free and independent character with their own opinion and the ability to clearly express it.

It’s worth noting that the format of the lessons was not boring at all – there were often games, activities and other interesting tasks which ensured that the lessons were not simply routine.

About life in America

America was the fourth country that I have visited, but I had never stayed anywhere as long as I did in the United States. The FLEX programme provides students the opportunity to live with a local family and observe the culture from up close.

At the beginning of the programme, I lived temporarily with an American family which I loved quite a bit. There were five members – the parents and their three children who were 13, 10 and five years old. Despite the fact that both the mother and father were very busy and worked for days on end, their family was their main priority. Dinner with everyone in attendance was a necessary, daily tradition. We often cooked together, all six of us, and spoke about what happened that day. After dinner, we’d do activities together – watch a film, ride bikes, take a walk or play board games. On Saturdays and Sundays we had picnics or visited festivals, and went to various interesting places.

Everyone was very busy during the week. I spent most of my time at school, but there was much to do apart from school as well – I was a volunteer, and for some time I worked as a teacher’s assistant in an elementary school. I worked as a volunteer at the library and at an animal shelter as well.

I won a grant to open an eco-club at school. I earned money by washing cars, mowing lawns, cleaning up trash, planting trees and walking dogs. These earnings, in addition to the stipend from the programme, were my pocket money. I am interested in much and I try to get as much information and experience from everything that I can.

I needed my bike to be independent. I went everywhere with it, and I like this side of American life.

About choosing one’s career and the future 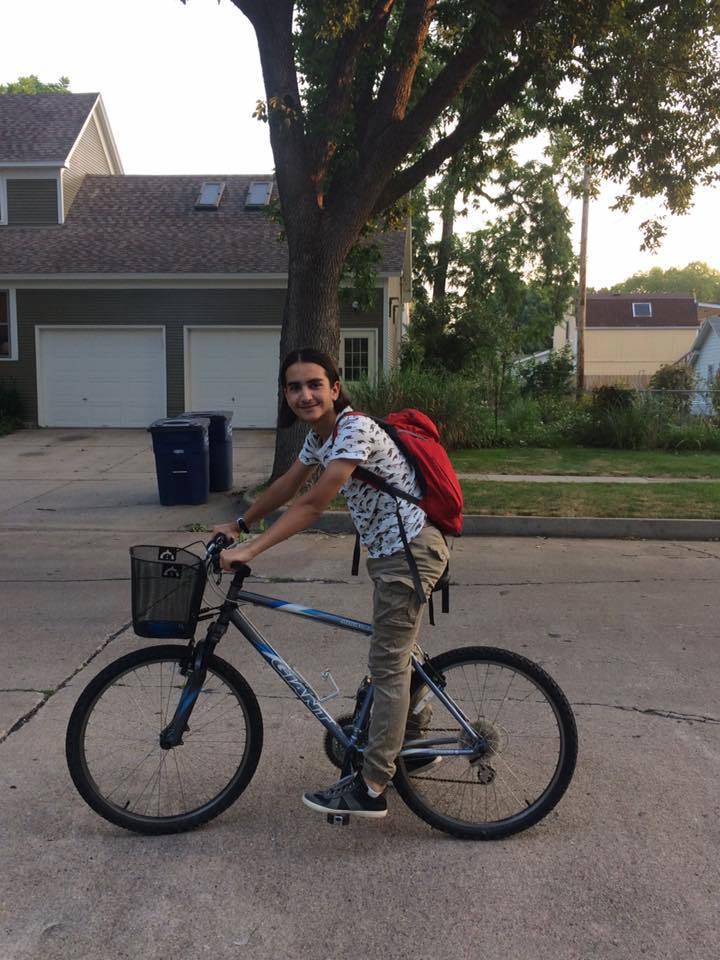 The year I spent in America played an enormous role in defining my future. In addition to the knowledge and experience I received, I learned to be independent in America. I studied personal finances, how to make decisions, and get out of difficult situations. The year was important for me in thinking about my future career – which was quickly approaching. I had to choose what I was going to study in university.

I plan to return soon to Georgia and obtain a Bachelor’s degree. I want to go to Ilia University and study Political Science. For my Master’s and Doctorate’s degree I’d like to return to America – Politics will remain my focus.

I want to go to America simply to study. I’d prefer to live in Georgia because I believe that countries are built by their citizens, and I want to be one of those that will be able to make my own contribution to the life of the country. Georgia will be a tolerant and just state in the future.