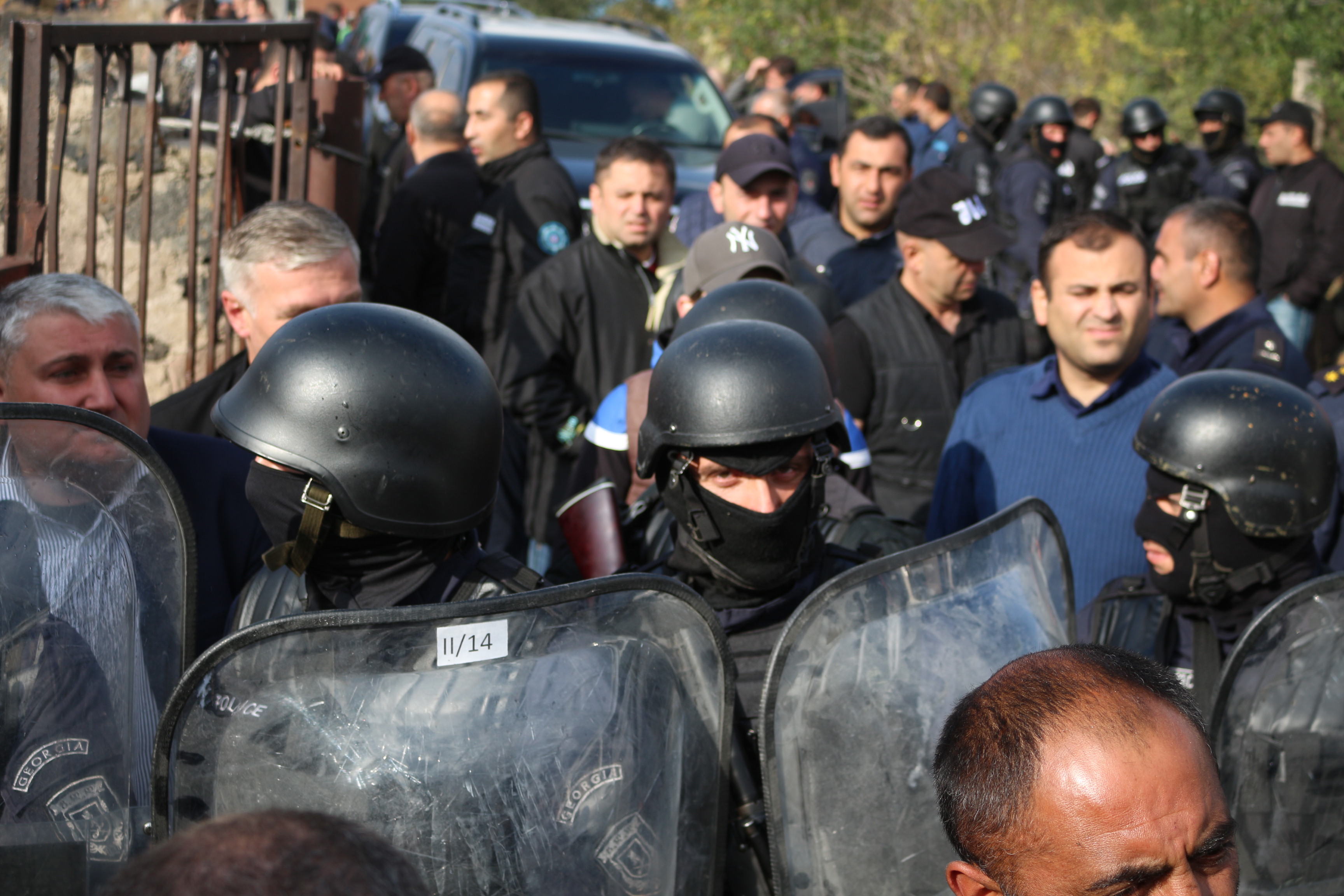 Georgia’s interior minister urgently travelled to Samtskhe-Javakheti, a region on the country’s southern border, on 30 September, a fact many saw as a sign the confrontation in the local village of Kumurdo [called ‘Gumurdo’ by the region’s Armenian population] had gotten really serious. It was serious indeed, as clashes between the police and local residents had left a number of people injured and several others detained.

The conflict started after police had refused to allow a group of locals onto the territory of Kumurdo’s Resurrection Church, which is currently undergoing major restoration work. The group of locals said that they wanted to erect a khachkar [a traditional Armenian tombstone] over an area where several sets of ancient human remains had recently been discovered by archeologists and then reburied. 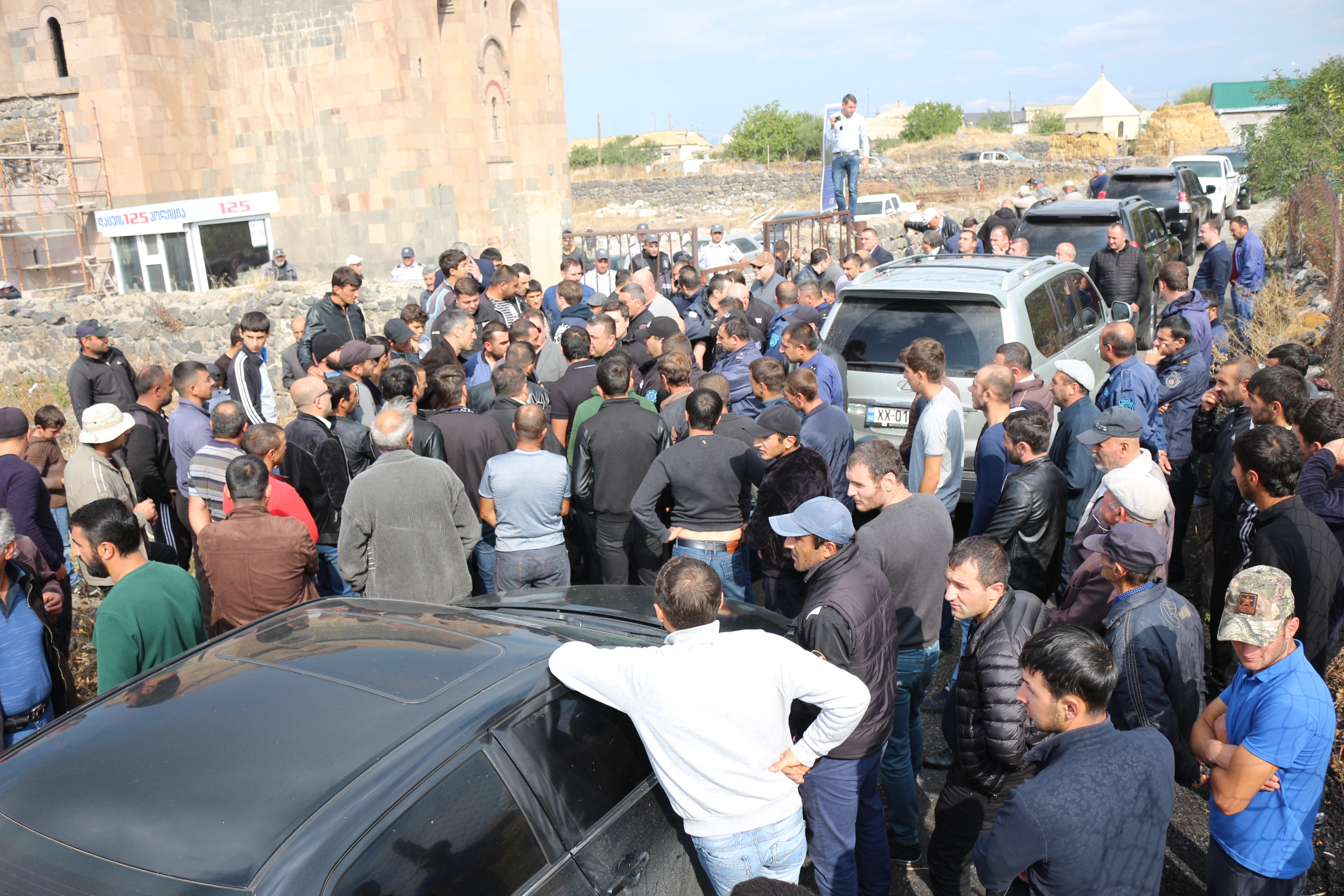 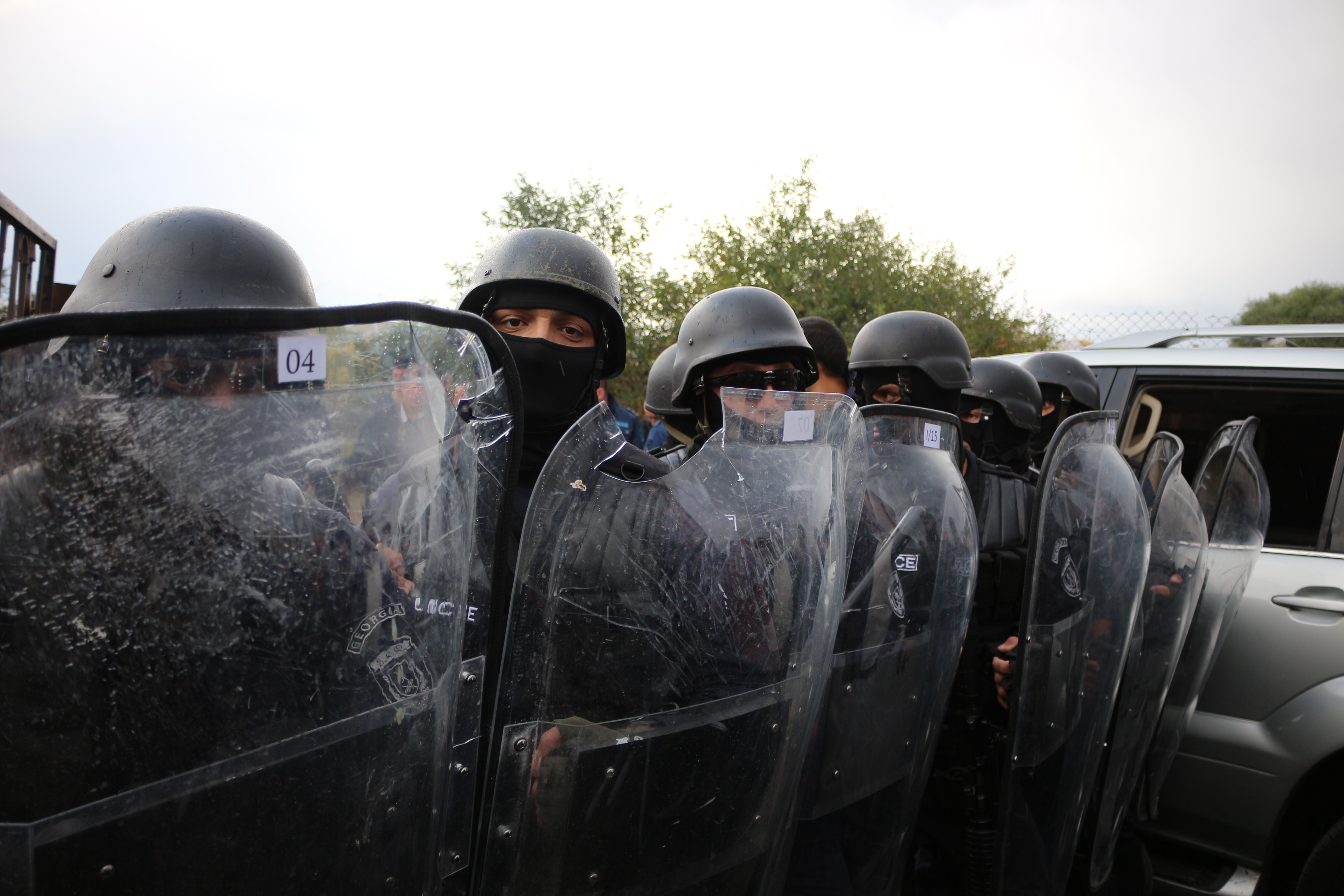 Riot police were brought in, and the church territory cordoned off. After the villagers tried to break through the police line, several warning shots were fired into the air. The crowd responded by throwing stones. Over the next few minutes, four policemen were injured after being hit by particularly big stones, as were several villagers and a local official. The injuries have been reported as not being life-threatening. The interior ministry has launched a criminal investigation into the incident.

Presently, it’s all quiet in the village, however some police remain deployed there. 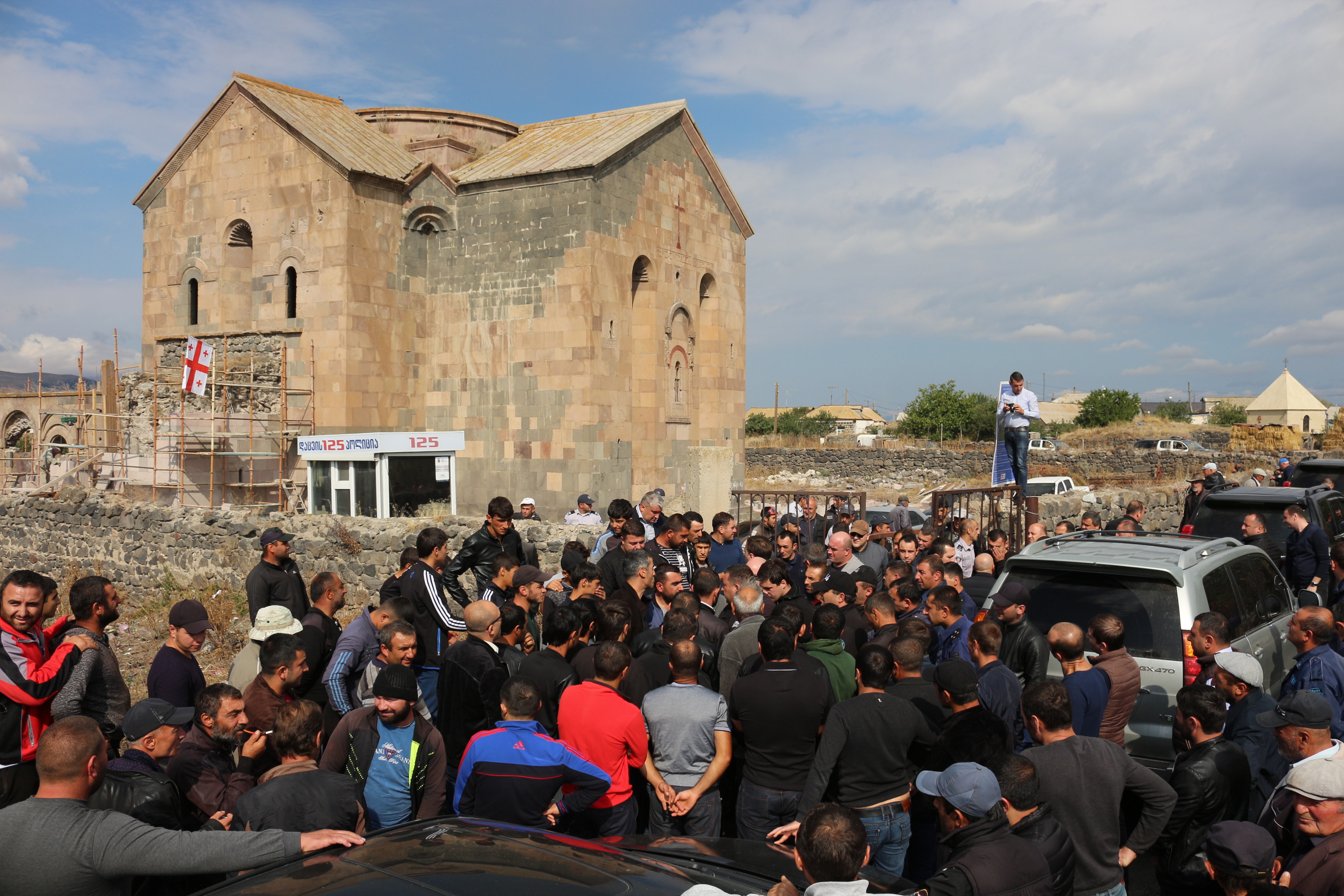 Kumurdo [Gumurdo] lies 18 kilometers away from the region’s capital town of Akhalkalaki and is populated mostly by ethnic Armenians. The Resurrection Church dates back to the tenth century and is one of several dozen religious buildings over which the Georgian Orthodox Church and Armenian Apostolic Church have been locked in a bitter dispute over for years, as both claim they are the rightful owner.

Tensions over the Kumurdo church were reignited in the summer of 2015, when a group of scientists arrived from Tbilisi to carry out archeological excavations and perform restoration work on the church’s territory. Locals protested, as they believed the real reason behind the work was to remove any evidence of what they said was the Armenian provenance of the church.

The excavations yielded human bones that the local Armenians claimed belonged to their ancestors – Armenian clergymen. They demanded that the remains be reburied in the church’s courtyard, which they were. However, the locals have never been allowed to erect any khachkars, a traditional attribute of an Armenian grave.

“It is up to clergymen, not politicians, to resolve the dispute” 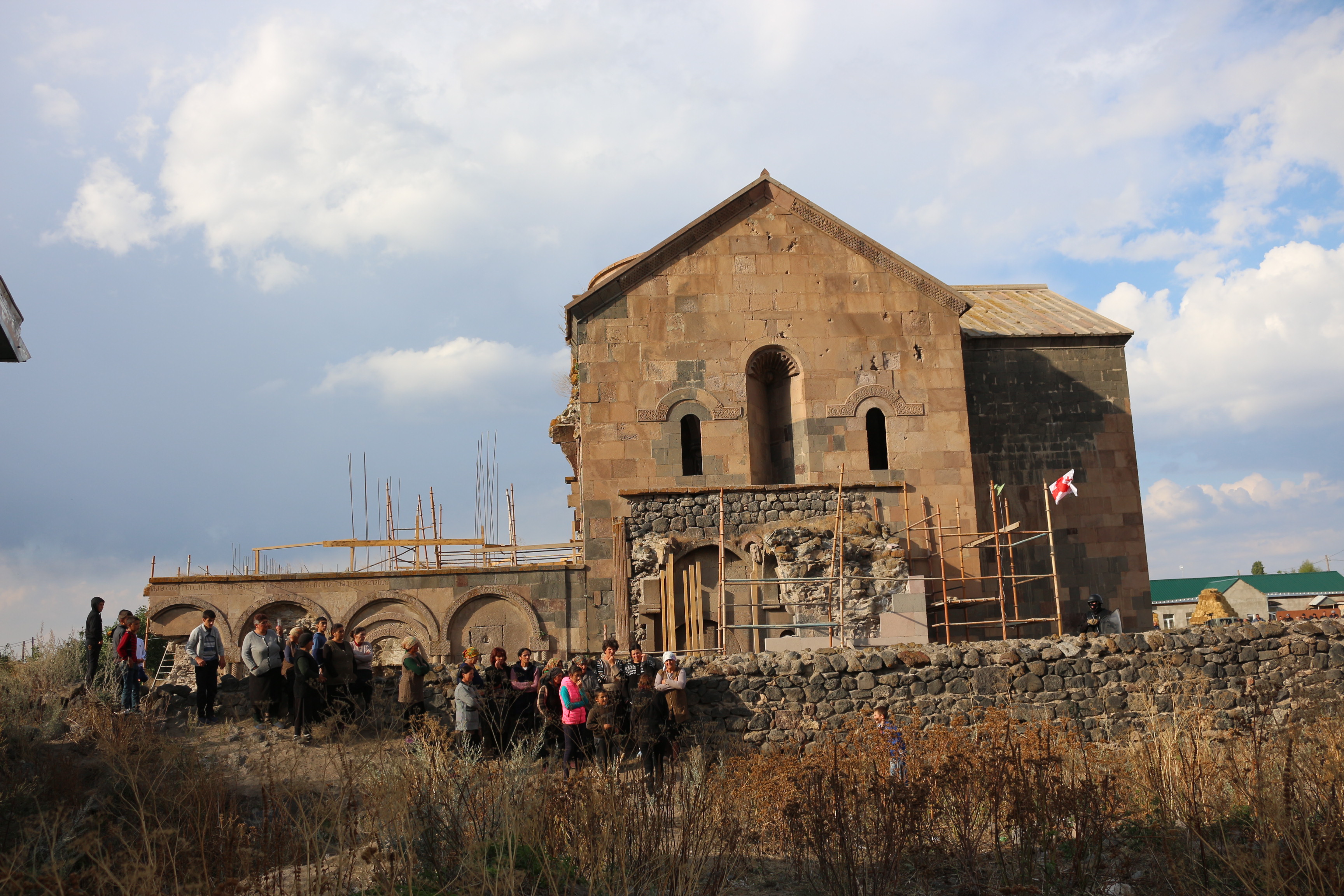 Representatives of the local administration came to Kumurdo to try to defuse the situation. Ashot Saharyan, a former local assembly member now running for office in the forthcoming local government election [taking place on 21 October], called on the villagers to break up and go home, promising they would be allowed to install khachkars on 4 October.

The Interior Minister Giorgi Mgebrishvili went through the police cordon and on to the church territory, accompanied by a number of villagers and local officials. No journalists were invited to sit in on the negotiations.

The local negotiators said they wanted their fellow villagers released, and the riot police out of the village.

The detainees were set free and the riot police left that very same evening, however the khachkar issue is still pending.

A member of the Georgian parliament, Samvel Manukyan, who is an ethnic Armenian, told the Kumurdo residents the khachkar issue was outside the purview of politicians, and that clergymen – both Georgian and Armenian – would be taking over the matter soon.

However, the villagers say they don’t trust the clergy to solve the issue.